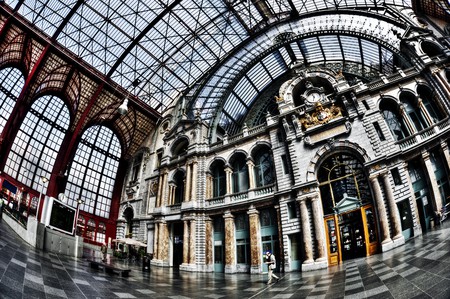 Its architectural style is undefined, as the structure seamlessly knits together materials of the past and the present. Antwerp Central, a regular on lists naming the world’s most beautiful railway stations, is the eclectic reminder of a tiny nation’s innovate part in the early railway industry.

Making the morning commute a whole lot more bearable for those lucky enough to work in Antwerp, ‘Antwerpen Centraal’ – or ‘de Middenstatie,’ as the locals call it – was erected during Belgium’s railway heydays. The small country had proudly become the first nation on the European continent to open a public railway in 1835, a mere five years after becoming independent. The Antwerp terminus had played a key role in the very first track, and over a ten-year period, between 1895 and 1905, the original wooden edition was replaced with one meant to symbolize Belgium’s pioneering role in the industry. 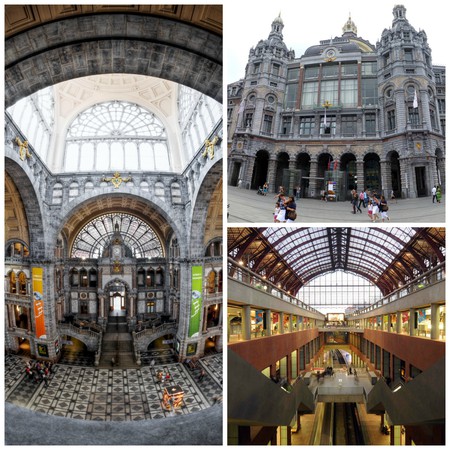 The project was envisioned as a grand affair – we find ourselves in the Belle Époque and the reigning age of ‘Builder King’ Leopold II, after all – with a coming together of great architectural minds. Louis Delacenserie, the Bruges city architect and noted imitator of historical medieval styles, took the reigns to design the stone-clad terminus in which the ticket hall still resides today. Though its outlook can roughly be described as Neo-Rennaissance and certainly recalls Antwerp in its 16th-century prime and even the ancient Roman Pantheon, certain elements give the game away, not in the least the Art Nouveau flourishes added to the façades. The waiting room hall, with its marble floors and awesome dome, is sometimes used to host events and concerts. Another important contribution was made by local Antwerp architect Jan Van Asperen, who was responsible for the viaduct leading into the station.

The man in charge of giving the terminus its signature steel platform roof was engineer Clement van Bogaert, who had worked his way up to Chief Engineer of the State Railways and knighthood before the end of the project. World War II bombs would wreak havoc on the iron and glass train shed, warping the construction so much that even after restoration, a certain bend in the roof is still discernible. The post-war renovation was also when the steel beams got their signature burgundy color. After another thorough, nine-year renovation and expansion that lasted until 2009, Antwerp Central Station now counts four levels, including two underground. The team behind the updated model was praised for creating a spacious feel and preserving its original features, even highlighting some historic elements that are now more visible than ever.