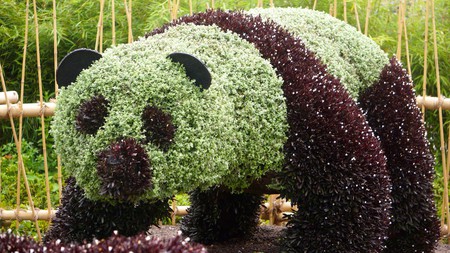 Animal park Pairi Daiza has a habit of drawing you in with its adorable giant pandas, only to discover whole beautiful continents lie in wait | © Sam.Romilly/Flickr

The privately owned animal park with botanical gardens has turned itself into a miniature rendition of the world by dividing up its 55 hectares into eight sub-worlds.

Kids dreaming of becoming world travellers, animal-loving adults or anyone with a passion for biology can get a taste of the enormous diversity our globe has to offer at Pairi Daiza. Standing on the site of the old Cistercian Cambron Abbey in the peaceful Walloon area of Brugelette, the zoo is now home to over 5,000 animals. Yet even with the familiar sights of penguins, elephants and giraffes, Pairi Daiza – meaning “closed garden” in Persian – is far from your conventional zoo.

The designers of the unique project have much more in mind, such as showing visitors the essential connection that exists between animals and other elements of nature, including different global cultures. Let’s take the Kingdom of Ganesha, which opened in 2009: Here, Pairi Daiza’s four lady elephants like to take their baths in the Holy Pool while the duo of white Bengal tigers prefer to lounge about in Tiger Temple, a structure built in honour of Cambodia. Its Indonesian garden – the largest in Europe – even houses rice fields and Balinese temples so authentic that local Hindu communities actually use them as places of worship.

Pairi Daiza, being a former bird park, has gradually expanded and La Porte du Ciel – or Heaven’s Gate – is the place where feathered creatures have retained their rule. With the ruins of Cambron Abbey rising up in the middle of this world, all sorts of birds can be seen soaring over the Rose Garden and the Monks Cemetery, the beautifully landscaped final resting place of over 700 men of the cloth. You’ll hear brightly coloured parrots and macaws chatter away, and find red ibis and flamboyant flamingo in Europe’s largest cathedral aviary.

The much-anticipated opening of the brand-new world La Terre du Froid – the Land of the Cold – is where chillier areas, such as the great American plains, Siberia, Lapland and Canada, will be replicated. The biggest draw, however, will remain Pairi Daiza’s resident dream couple, Hao Hao and Xing Hui. These giant pandas, on a 15-year loan from Japan, recently became the proud parents to Baby P., a cub whose cuteness has already drawn in crowds. Soon, the black-and-white panda will be venturing outside of his Mum’s cave to munch on the bamboo trees of the family’s very own forest.

Add to all of this an always-smiling, water-splashing bunch of hippos, the world’s largest Japanese and Chinese gardens, elevated walkways that provide panoramic views of the park’s different continents, and the nocturnes that highlight cultural customs from all around the globe, and you’ve got yourself a paradise well worth exploring.