Belgian Castles You Can Actually Stay In 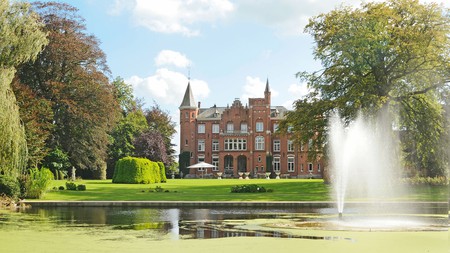 Fantasies of Medieval glory don’t get much closer to coming true than staying in one of the Belgian castle hotels that are dotted all over the Ardennes and former Duchy of Brabant regions.

Whether it’s Christmas at the hearth of a lavish château in Spa or dining in the palace that neighbours the famous Citadel of Namur, these Belgian hotels are the stuff of luxurious getaways. 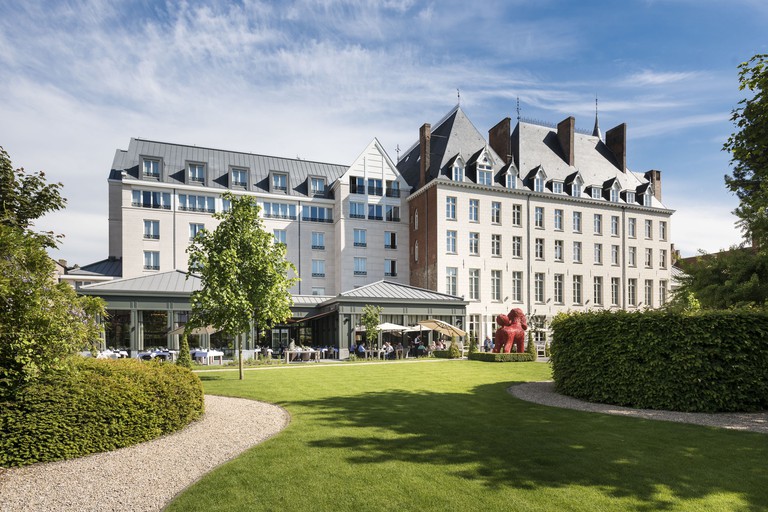 Courtesy of Hotel Dukes' Palace / Expedia
The Dukes’ Palace is the only five-star hotel in Bruges, which alone is reason enough to take an interest. It’s situated in a serene corner of the city, west of the Markt and the Torture Museum. The building was once the palace of the Duke of Prinsenhof (the name’s a giveaway) and looks like it was copied straight from a Disney movie. The 110 rooms are appropriately lavish, with stucco ceilings, fireplaces and marble bathrooms. The hotel also offers an understated but warm restaurant and a spa with a salt wall and massage suites.
Open In Google Maps
8 Prinsenhof, Brugge, Vlaanderen, 8000, Belgium
+3250447888
Visit Website
Give us feedback 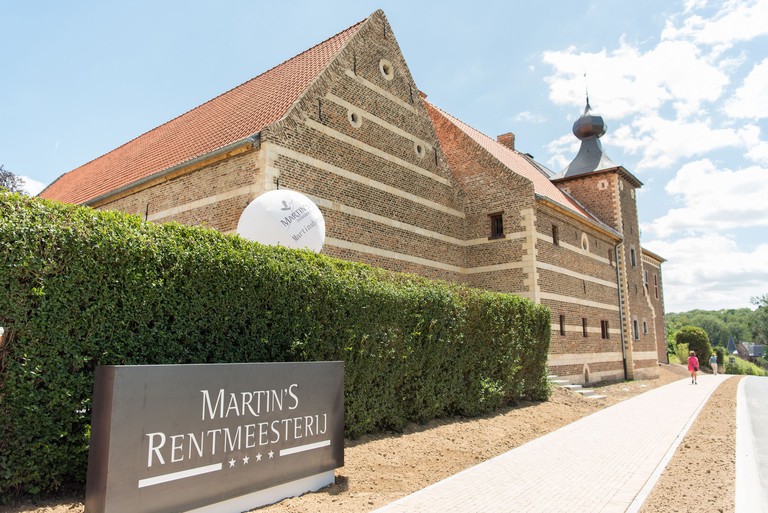 Courtesy of Martin's Rentmeesterij / Expedia
The Martin family have been doing business in Belgium since John V. Batthiany Martin arrived in Antwerp with a crate full of Guinness and a plan to start importing other British booze. The Rentmeesterjj is one of 14 hotels they run around the country and sits on the grounds of the Grand Commandery Alden Biesen, a heritage site. The castle-like building is, thus, complemented by the historic grounds. Inside, there are 69 rooms with exposed wood beams, paired with more modern touches like hanging naked bulbs and walk-in showers. There are an indoor pool, a spa, a bar with an outdoor terrace and a restaurant.
Open In Google Maps
2 Kasteelstraat, Bilzen, Vlaanderen, 3740, Belgium
+3289442121
Visit Website
Give us feedback 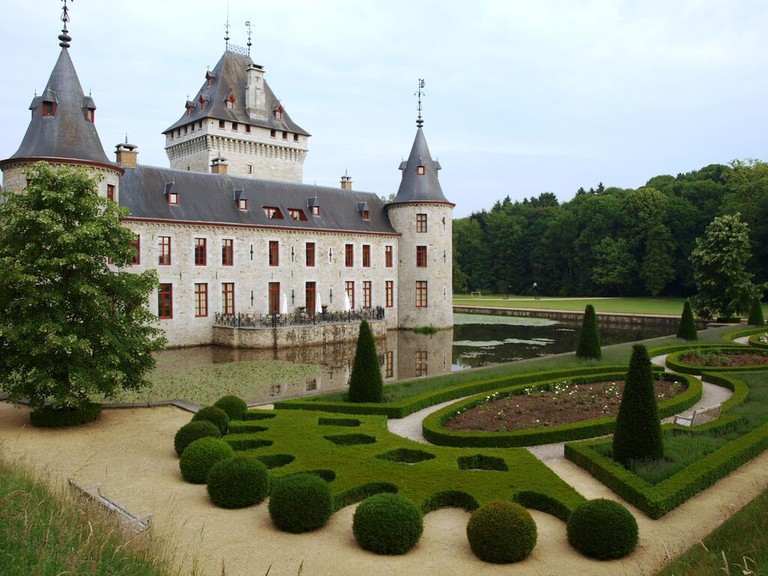 Courtesy of Château Jemeppe / Booking.com
Château Jemeppe (aka Jemeppe Castle) dates back to the 12th century and was home to several powerful families in the Luxembourg region before being converted into a hotel. Following a change of ownership in 2020, the Château has become a symphony of interior design – each room has its own character – but, interestingly, none of them has a minibar or a TV, as the rooms are designed to encourage guests to spend quality time together. The restaurant, La Ferme, offers lots of interesting seafood dishes and will even pack guests a lunchbox if they’re off to explore the local valleys, rivers and ruins.
Open In Google Maps
24 Rue Félix Lefèvre, Hargimont, Wallonie, 6900, Belgium
+3284225901
Visit Website
Give us feedback 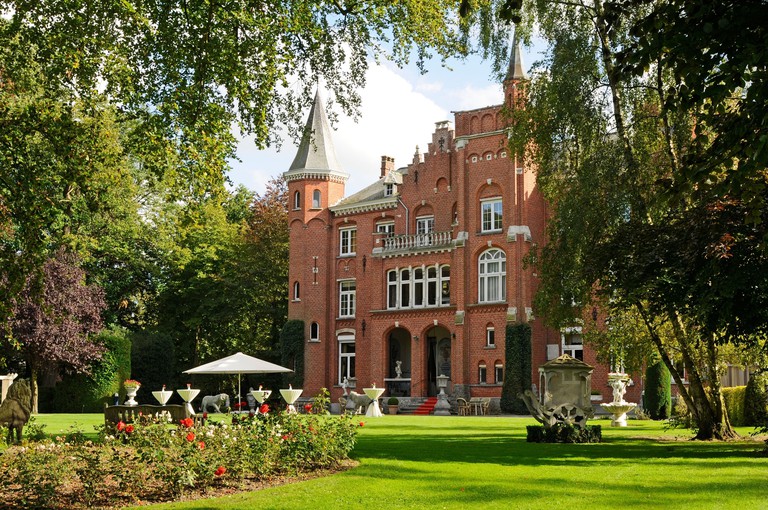 Courtesy of Hotel Lodewijk Van Male / Expedia
The Lodewijk Van Male is just 15 minutes from Bruges by car, far enough away to offer rolling-countryside views but near enough to be a viable basecamp for urban exploration. The grounds include a big garden with a pond and 15 rooms with a kind of regal aesthetic. The building dates back to the 13th century and sits strikingly against a green backdrop. Facilities include a restaurant and a cafe area with outdoor seating around an old fountain.
Open In Google Maps
488 Maalse Steenweg, Brugge, Vlaanderen, 8310, Belgium
+3250355763
Visit Website
Give us feedback 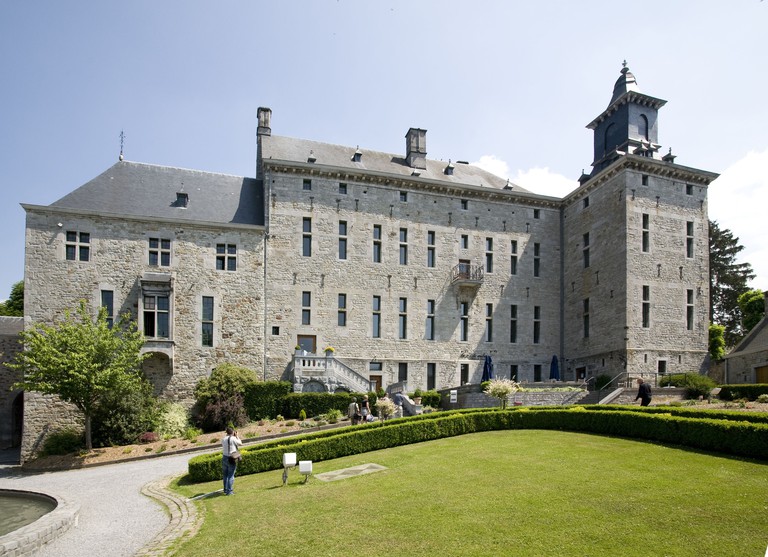 Courtesy of Chateau de Harze / Expedia
The Ardennes region is one of the most postcard-friendly in all of Belgium and brims with history (including a number of pivotal battles during both World Wars). Château de Harzé is near the German border, close to the River Amblève and Les Grottes de Remouchamps – a network of prehistoric caves, which is open to the public for bat-watching tours. The Château itself is a 17th-century artefact with minimalist modern rooms featuring fridges, coffee machines and spectacular woodland views. The restaurant, la P’tite Auberge, offers traditional meals made with local ingredients and can also be sent directly to the room.
Open In Google Maps
1 Rue de Bastogne, Aywaille, Wallonie, 4920, Belgium
+3242466363
Visit Website
Give us feedback 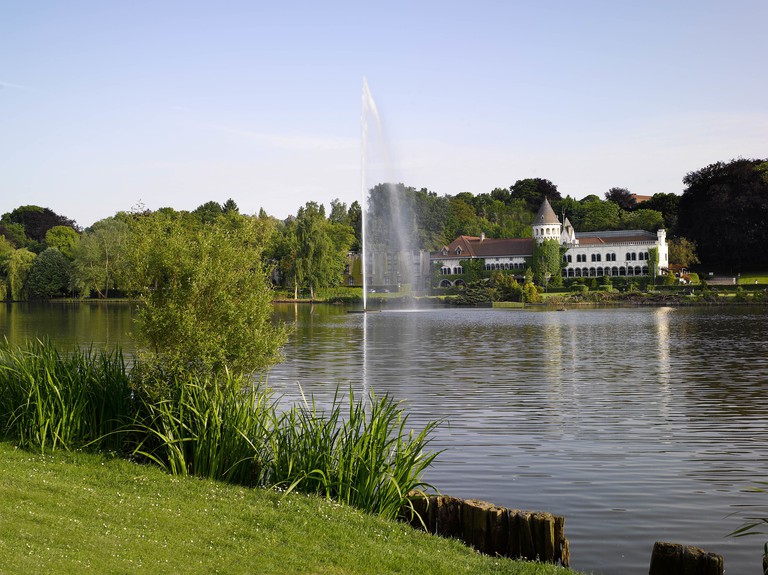 Courtesy of Martin’s Château du Lac / Expedia
Looking out over Lake Genval is Martin’s Château du Lac, located less than half an hour away from Brussels. The castle is nestled within a large park that offers a lush escape into the nature of Walloon Brabant, the Roman Empire’s historic seat of power in the Low Countries. The grand past can still be felt in the rooms, which boast four-poster beds and panoramic views of the lake. The sumptuous Heron Suite and Kingfisher Suite both offer salons and Jacuzzis for the ultimate relaxation. Unsurprisingly, the possibility of romantic strolls by the lake has made the Château du Lac a steady wedding-party favourite.
Open In Google Maps
87 Avenue du Lac, Genval, Wallonie, 1332, Belgium
+3226557111
Visit Website
Give us feedback 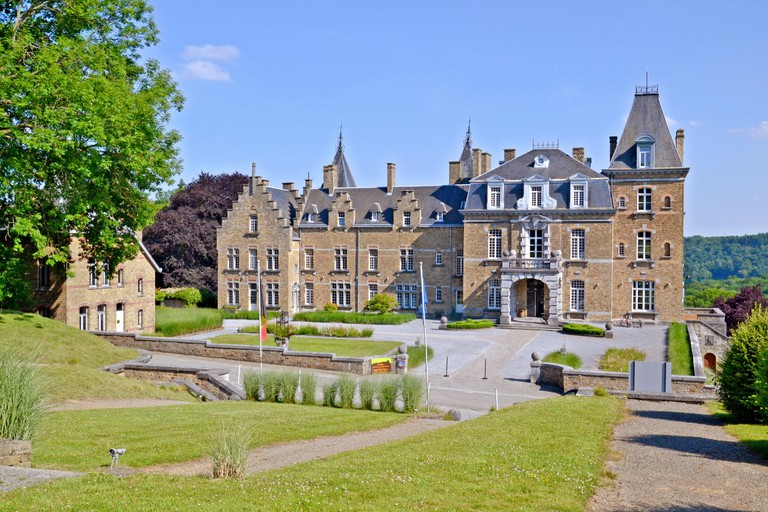 Courtesy of Château de la Poste / Expedia
Set amid the glowing fields of the Belgian Condroz since 1884, Château de la Poste has a royal past. It was Princess Clémentine, daughter to King Léopold II, who inhabited the stately digs for more than thirty years in the first half of the 20th century before the castle became a holiday centre for postal clerks. In 2009, it was turned into a luxury hotel, and, while its blue-blooded residents may have long departed, they left a warm hearth and beautifully landscaped 42ha (104 acres) park that makes for colourful walks in the fall. For those who want to spend a night feeling at one with nature, there are even a treehouse and a ‘Loft Cube’ in the adjacent forest.
Open In Google Maps
25 Château de la Poste, Maillen, Wallonie, 5330, Belgium
+3281411405
Visit Website
Give us feedback 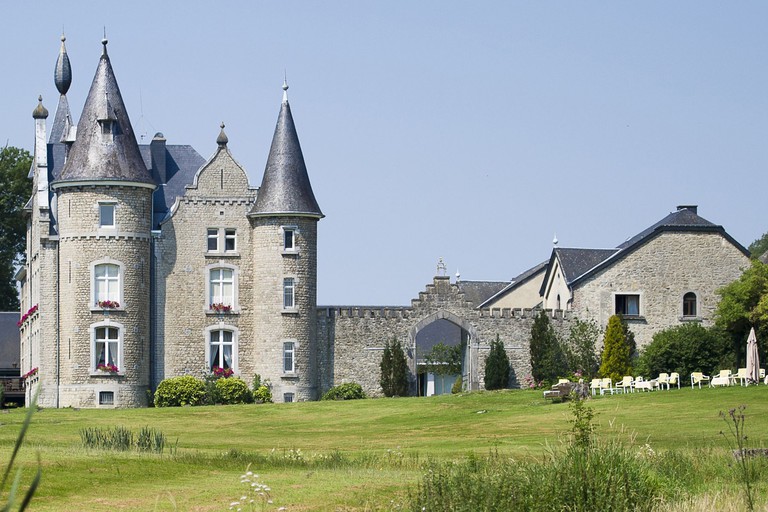 Courtesy of Château d’Hassonville / Expedia
Legend has it that the Château d’Hassonville in Marche-en-Famenne was originally designed to serve as a hunting abode for Louis XIV, who loved the diversity of the region, which is squeezed between the Belgian Condroz and the leafy Ardennes. What is certain is that the surrounding 55ha (136 acres) terrain was designed by a pupil of André Le Nôtre (the Sun King’s favourite gardener and the mind behind the Gardens of Versailles). The Château’s resident chef, Sébastien Phys, and his team serve French-style cuisine, and their culinary creations can be paired expertly with wine from the cellars upon request. The sunlit veranda and multiple salons featuring fireplaces make sure there’s always a snug spot to be found.
Open In Google Maps
Route d'Hassonville, Marche-en-Famenne, Wallonie, 6900, Belgium
+3284311025
Visit Website
Give us feedback 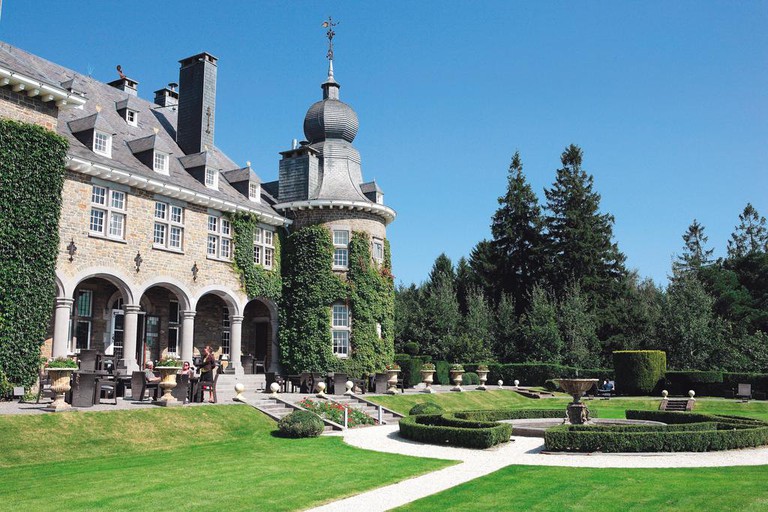 Courtesy of Manoir de Lébioles / Booking.com
Spa, one of the most picturesque and unspoilt areas in Belgium, also happens to be home to the Manoir de Lébioles, one of the most resplendent castle hotels in the country. A meticulously kept garden gives way to ‘the small Versailles of the Ardennes’, with warm decor and a lively atmosphere. Among the many activities the castle organises, such as a golf tournament and house concerts, the Christmas package, with hot chestnuts and homemade pastries by the fireplace, sounds most alluring.
Open In Google Maps
1/5 Domaine de Lébioles, Spa, Wallonie, 4900, Belgium
+3287791900
Visit Website
Give us feedback 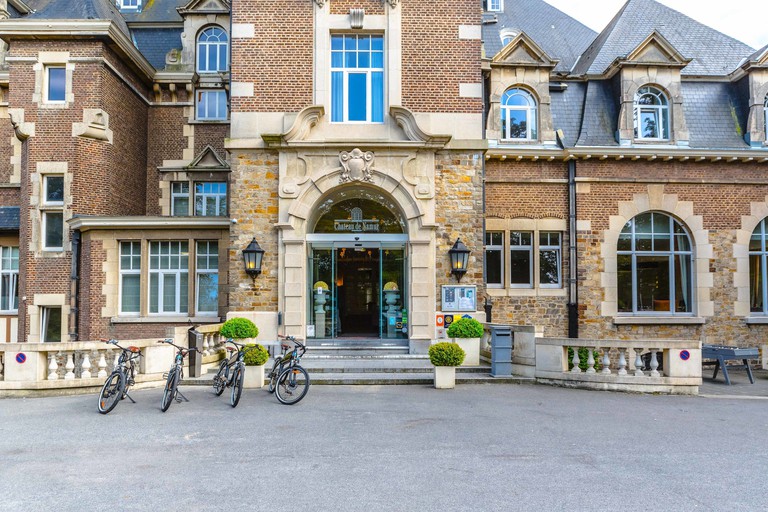 Courtesy of Château de Namur / Expedia
Namur is one of the more ancient cities in the Wallonian region of Belgium. The 29-room Château de Namur blends perfectly into this environment and is within walking distance of attractions like the Citadel and the Grand Casino. The rooms have feature wallpaper, soft lighting behind the beds, well-stocked minibars and a complimentary bottle of Champagne on arrival. The restaurant serves modern dishes, and, like the rest of the hotel, has an affiliation with the nearby Hotel School of the Province of Namur.
Open In Google Maps
1 Avenue de l'Ermitage, Namur, Wallonie, 5000, Belgium
+3281729900
Visit Website
Give us feedback

This is an updated version of an article originally written by Nana Van De Poel.