50 Years After Magritte: A Special Surrealist Trail Throughout Brussels

Magritte meets Atomium | © atomium.be - SABAM 2017 - C.H.:ADAGP Paris & A. Addington
For a man who didn’t like to talk about the meaning behind his art (‘The mind loves the unknown,’ he remarked), René Magritte and his motifs, from the green apple to the pipe that isn’t a pipe, are everywhere in Brussels these days. 2017 marks the 50th anniversary of the revered surrealist’s death, and the Belgian capital is seizing the opportunity to pay homage to its greatest painter hero with a flurry of special exhibits.

If Belgium’s beguiling Atomium with its nine balls of steel and oft-missed structural reference to an iron crystal isn’t a worthy place of honouring the country’s premier surrealist, we don’t know what is. On the occasion’s of both the anniversary of Magritte’s death and the Atomium’s 60th birthday, the two Belgian icons will join forces for a year-long interactive exhibit.

Two spheres of the landmark have been entirely given over to 3-D representations of the artist’s work. While the true connoisseur won’t find anything new, kids and adults new to Magritte’s oeuvre can expect a smashing introduction to the painter’s signature motifs and themes in the form of interactive displays. 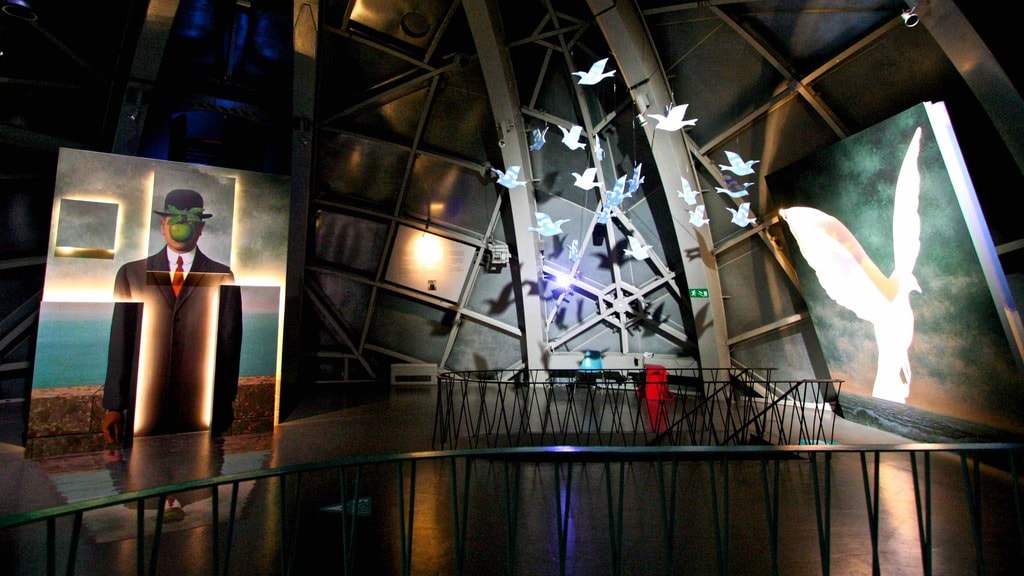 The many faces of Magritte

For much of his life, Magritte couldn’t be considered well off. In fact, he produced the biggest part of his oeuvre in the kitchen of his Jette home, while his wife Georgette did the dishes or played the piano. Now a home museum that shines a spotlight on Magritte ‘the man’, his personal life, his influences and the lesser-known periods of his artistry, the establishment has set up an open-air travelling exhibit in the parks of neighbourhoods the Bruxellois liked to frequent.

The museum series, called Signs of Life, is not of his works but, somewhat ironically, consists of 21 photographic portraits of the man who mostly refused to paint faces.

Offering yet another perspective on the artist is The Lost Magrittes exhibit, which boasts 27 never before seen works from the master’s hand. Signalling Margritte’s interests outside of Surrealism, these pieces tackle new themes and unexpected styles with signature quality. An Atomium ticket will get you a 2 euro discount to the Magritte home museum and vice versa.

Magritte and Lecomte, partners in crime

Museum
Magritte paints La Clairvoyance, a self-portrait of the artist painting | Magritte paints La Clairvoyance, a self-portrait of the artist painting
Though frequently lifted above the crowd as a shining example of the Surrealist painter, Magritte can’t be seen removed from the context of his dedicated circle of artist and intellectual friends. The Brussels Surrealist clique, to which his Jette home had become a weekly gathering place, provided inspirational fuel in the form of suggested titles for his work and introductions to painters like Giorgio de Chirico, who would dramatically overturn Magritte’s conception of painting. It was essayist and poet Marcel Lecomte who revealed de Chirico to Magritte, and the relationship between the two friends is explored in a new exhibit at the large Magritte Museum on the Place Royal. Letters sent between the two and reflections on Magritte in unpublished writings by Lecomte provide a perspective on the iconic artist through the eyes of one of his fiercest compatriots. The museum is open on Mondays for the duration of the exhibit, making it possible to delve into Magritte’s world. Until February 18, 2018
More Info
Open In Google Maps
Brussels, Belgium

The greats he inspired

Museum
With over 200 original Magritte works, the largest Magritte collection in the world has also organised a second, larger expo that connects the dots between the Surrealist and the contemporary champions Magritte’s influenced. Works by Marcel Broodthaers, Gavin Turk, Keith Haring, Jasper Johns and Andy Warhol have been shipped to Brussels and set up alongside the Surrealist’s images for the occasion. Until February 18, 2018
More Info
Open In Google Maps
Brussels, Belgium

For those who wish to sidestep the museum path, the City of Brussels has also captured the late Magritte’s favourite hangouts in the special pamphlet Be Magritte, Be Brussels (available from the tourism office). We’re talking longtime bohemian bar La Fleur en Papier Doré, Belle Époque chess tavern Le Greenwich and multiple guided walks that reveal the city’s Surrealist tendencies.