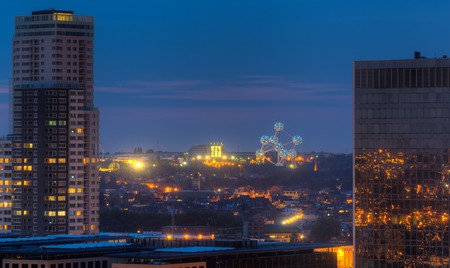 The Atomium’s shiny steel spheres reflecting the sunlight, Manneken Pis’ daring act of peeing rebellion and the Mont des Arts garden in bloom are all perfectly pretty Brussels pics. For a real dive into photogenic Brussels, though, these 14 lesser-known spots are well worth exploring.

The entrance to Villa Empain

If there ever was a door recalling the Gatsby era in all its glory, it’s Villa Empain’s cast-iron-and-gold stunner. Situated outside the center and behind the Bois de la Cambre, the Art Deco mansion often falls by the wayside on a Brussels getaway, only to lament the fact when bumping into photographs of this remarkable space, erected in the lushest materials the interwar period had to offer. 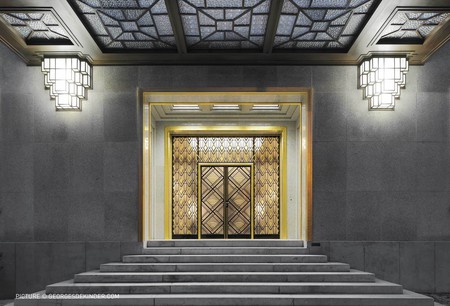 Few visitors neglect to snap a shot of the iron crystal-shaped Atomium so emblematic to Brussels and its slightly weird ways. A terrific alternative to the clichéd pic where you hold the nine-balled giant between your thumbs is to document your journey through its tubes. Looking at it later will take you right back to the bowels of the steel giant. 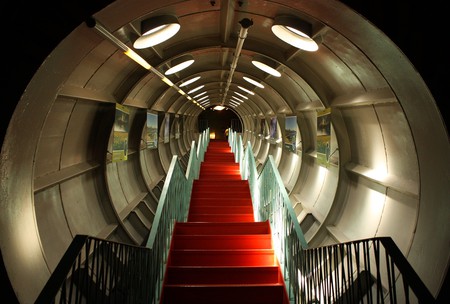 Inside an Atomium tube | public domain 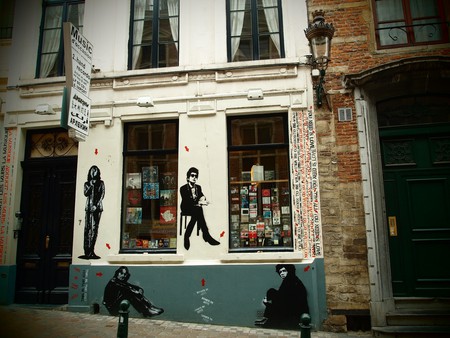 Brussels’s canal from the MIMA terrace 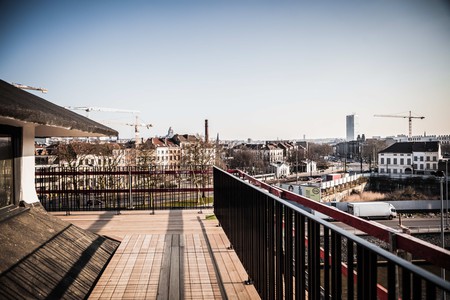 The age-old Marolles district is known for its working-class history and daily flea market where real bargains are to be made. Its collection of towering, orange-tinted social housing blocks, with sheets and towels often waving from the terrace railings in the summertime, can feel like a village unto its own. 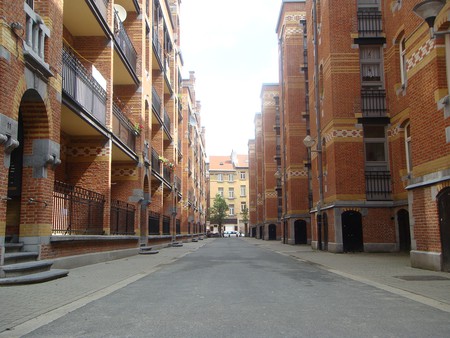 An outdoor graffiti museum of sorts, Neerpede’s “Hall of Fame” is where urban artists are allowed to let their imaginations run wild. Huge mainstays have been spruced up with detailed imaginings, including a 10-meter-high (32.8 meters) portrait of Stromae by local artist Locatelli. 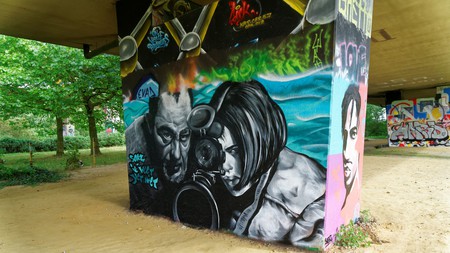 The Finance Tower in a cloud jacket

Catch Brussels’s Finance Tower on a slightly cloudy day and at the right angle, and you’ve got yourself a Magritte-style composition. 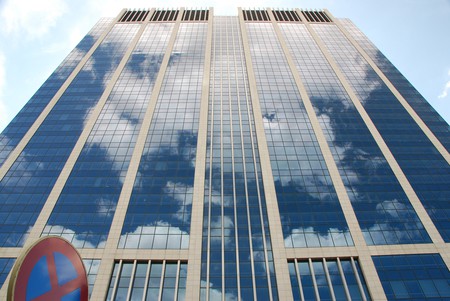 The Petit Sablon and its sculpture compilation

A treasured green patch in the upscale Sablon neighborhood, the Petit Sablon square has 48 statues, representing the city’s ancient professions, surrounding it. 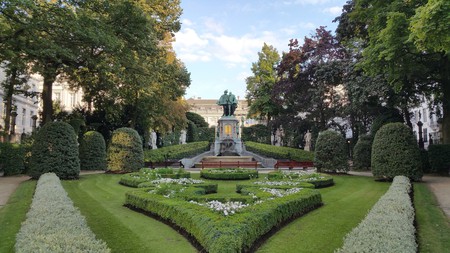 Le Botanique in the evening

At this national botanical gardens-turned-concert venue, an evening stroll through the beautifully sculpted garden alone can be lovely. Add a multi-colored display to its greenhouses, however, and you get long-exposure magic. 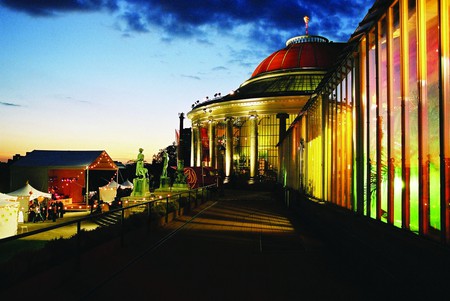 You’d hardly expect a neighboring metro station to provide a different yet stunning new perspective on the Atomium. White symmetrical poles and airplane stripes reaching back into the horizon apparently pair quite nicely when juxtaposed by the monument’s circular balls of steel. 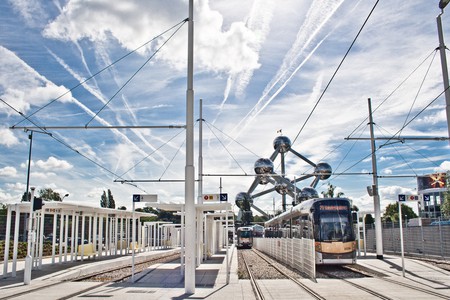 A worm’s-eye view of the Royal Greenhouses

Three weeks in spring is all the time allowed to explore the royal family’s lush greenhouses, and we hardly blame you for being focussed on the exotic plants in the middle of their bloom period. Looking up at Alphonse Balat’s Art Nouveau domes will leave you with even more flower patterns to adore, though. 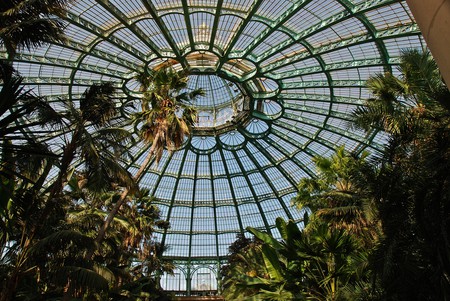 The roof of the Royal Greenhouses | © Stephane Mignon / Flickr

An essential green lung amidst Brussels’s often traffic-congested reality, fans of animal photography–or fluffy chipmunks—should head towards the Sonian Forest. Home to photogenic roes, red squirrels, and rooting hogs, this is where the region’s wildlife shows off its best side, preferably at dawn or dusk. 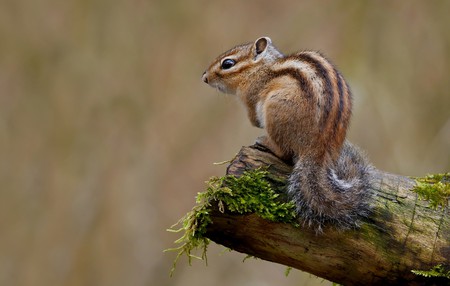 Brussels’s fondness for a fairytale surfaces loud and proud during the holiday season. The capital’s Winter Wonders Christmas market, which grows bigger and more enchanting every year, includes a parade that’s designed to charm anyone’s pants off. 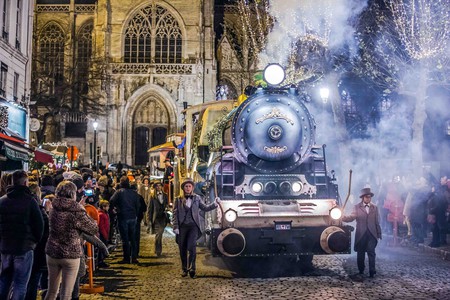 When rushing from one must-see landmark to another, it can be fun to stop and smell the roses. A 10-minute people-watching/photography break never hurt anyone. 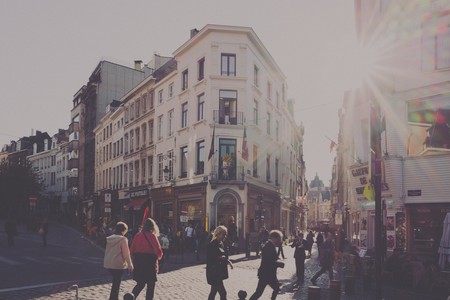