‘Brussels’ Brandenburg.’ The dramatic arch and arcade of Parc du Cinquantenaire (Jubelpark) welcomes visitors to the site of the 14-18 exhibition after a thirty minute walk or ten minute metro ride (Schuman or Mérode stations) from Brussels Central. The edifice’s regal splendor was the work of King Leopold II to commemorate the 50th anniversary of Belgian independence in 1880. 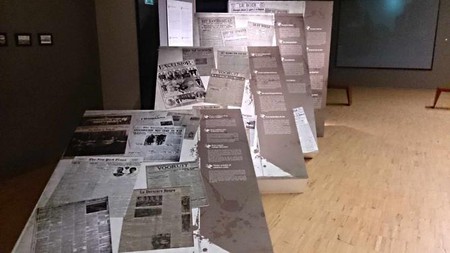 The structure, still unfinished, staged the 1897 World’s Fair. It is the 1910 version of the event, also held in Brussels, where the 14-18: It’s Our History exhibition begins. For World, read Europe — Eurocentrism was rife in the decades before WWI. Europe had colonized over half of the globe — a little under half of its population and 90% of Africa. The World’s Fair was the icon for the glorification of this supremacist system, a capitalistic extravagance designed to project the power of the host nation unto its first world partners. With an estimated 13,000,000 visitors to the fair, Brussels was the serene host to more than Belgium’s modern population (11.2mil in 2013).

The exhibition successfully evokes this overlooked context of opulent luxury and silent peace. The summer of 1914 was just another summer. The curators take time to transport us back to its tranquil normality. The King was taking his annual holiday (rather bizarrely, his bed features within this ‘all inclusive’ exhibition), and the twelfth Tour de France started on June 28. That same day, the nineteen-year-old Gavrilo Princip walked towards a black automobile in Sarajevo. Two shots were fired. Princip had killed Austria-Hungary’s Archduke Franz Ferdinand. Belgian Phillipe Thys won his second Tour de France on July 26. A little over a week later, Germany invaded Belgium.

This chronology of normality and historical extremity is the early lesson of the 14-18 Expo. Summer 1914 is the collision between these two worlds. Now, the lessons of hindsight and retrospect make war inevitable, but to those at the time, this was not the case. As two gunshots ring out, the faint sound of jazzy music can still be heard rippling in the speakers of the peacetime rooms before. 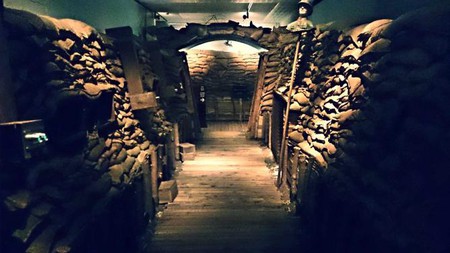 A Sanitized Trench: here’s the trench, but where’s the stench? | Courtesy of Rory McInnes-Gibbons

The sonic texturing of the exhibition is a real achievement. The words of T.E. Lawrence open the room dedicated to the early phase of the war as the German advance meets opposition and, ultimately, complete stalemate. A floor map underlines the undying futility of the mechanized slaughter as the front moves negligibly between August 23, 1914 and November 11, 1918. In ‘Flanders’ Fields,’ the immortal poem echoes around the rooms narrating the experience of soldiers on the front. The soundtrack binds the exhibition experience to unify the catalogue of archive images, video clips and installation replicas of the era.

These replicas range from the rather kitsch, an American shop selling US aid packages, to the effective realization of a trench complete with periscopes revealing slides of No Man’s Land scenes. The gruesome smell of sludge and grime is absent, but the primary focus of the exhibition is the state of limbo for Belgians under the occupation. This explains the shop, but other examples include a café, prison cells and a moving tribute to the resistance fighters who lost their lives risking them for liberation. 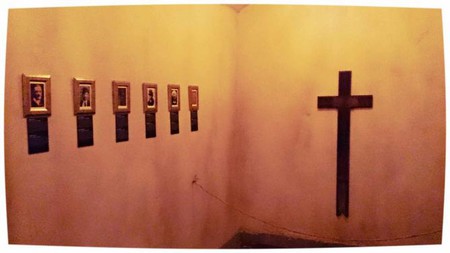 Cavell and Co. dead but undefeated, their stories live | Courtesy of Rory McInnes-Gibbons

Small portraits of the faces of individuals involved form a guard of honor leading to a cross within a tiny chapel. Included amongst them is a photograph of British nurse Edith Cavell. Cavell helped more than two hundred allied troops escape from Belgium to neutral territory. When her network was betrayed, she was found guilty of treason and shot by a firing squad while still in her nurse’s uniform. A heroine, she became a Christian martyr for the allied effort, a beacon of courage in the face of the impossible. Cavell’s was an example of an English civilian crossing the channel to Belgium. The overriding current was in the opposite direction.

Remember Belgium — so went the propaganda posters of the early war recruitment effort in Britain. Casting ‘Brave Little Belgium’ as victims of ‘Rape,’ both of its neutrality and identity, there was outcry over the atrocities in Leuven and Dinant. Dinant was the site of a 674-person massacre, including a three-week-old baby, mass deportations and the wounding of Charles de Gaulle in the heavy fighting. The same week saw Leuven’s St Peter’s church and university burned in acts of systematic brutality.

Afterwards, Belgium came to Britain in a big way. More than one and a half million Belgian citizens sought refuge in the Netherlands, France and Britain, of which an estimated 250,000 found four years of shelter in Britain. 16,000 in a single day. To contextualize this, Britain’s Home Office has granted asylum to almost 5,000 of the four million Syrian refugees since civil war broke out in 2011. Such was the size of the Belgian exodus, it even included Albert’s son (the future Leopold III) enrolling at Eton in 1915. 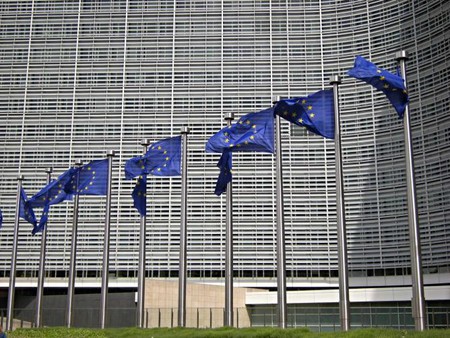 It is a story portrayed in the photographic exhibition at Antwerp’s MAS in the elegant exhibition, Exodus. Elegant because the photos adorn the normally dead spaces along the escalator walls. Over nine floors, the tale of these citizens in exile is explored from the early panic to safety and unsettling return to a homeland destroyed.

Walking back down the Rue de la Loi (Wet Straat) back into the heart of Brussels, the glittering grey cells of the European Commission shine out from the glass monolith, Le Berlaymont. Though an office building, it is symbolic of the development of Brussels into the capital of Europe — the bureaucratic brain of European unity.

The final room of the exhibition showcases the legacy of WWI as the dawn of the modern. WWII gets a two minute overview, before the Cold War and the inauguration of the modern international institutions, chiefly, the European Union. Designed as a paragon of solidarity and cooperation, the EU has avoided the calamities that defined the twentieth century. Long may this continue.