11 Reasons to Visit Ghent Over Bruges 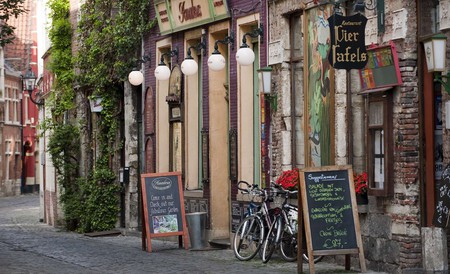 Of course, Bruges, resplendent with medieval charm, has earned its prominent place on the EuroTripper’s busy schedule fair and square. Culture seekers on the lookout for the road less traveled would do well to take a look at Ghent though. Historic yet oozing a young, artistic energy, this underdog has been crawling from underneath “the Venice of the North’s” shadow for a reason – or 11 of them.

The city cherishes its street art and the talents behind it

Dip into the alleys and lesser-known city parks behind the historic core, and a colorful new world is laid bare. Suddenly larger-than-life sailors, vibrant blue creatures, and heaps of black-and-white bunnies reveal themselves, all products of a street art-friendly policy that has turned Ghent into an urban canvas for local and international talents like ROA, Steve Locatelli, Strook, Bue the Warrior, and Chase. Designated spots such as Graffiti Alley and the former dock site Grindbakken have become artistic safe havens where creative desires are indulged and where jaw-dropping murals come into being. Pick up a Concrete Canvas Tour map at cultural temple De Vooruit, the Ghent information offices, or print it out here to discover the magic at your own pace. 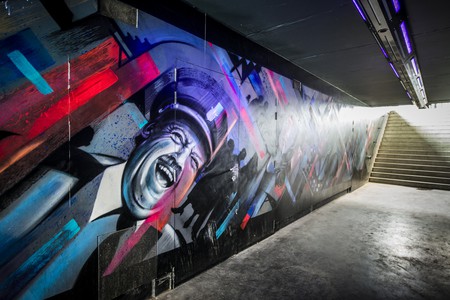 The quays are alive with laughter

While Bruges’ canalside streets tend to empty out as the day moves into night, their Ghent counterparts tend to go in the opposite direction. In spring and summertime, Gentenaars getting off work or out of class head to the waterside Graslei pronto to share laughs and drinks with friends, be it on a sunlit terrace or with a store-bought bottle of wine. 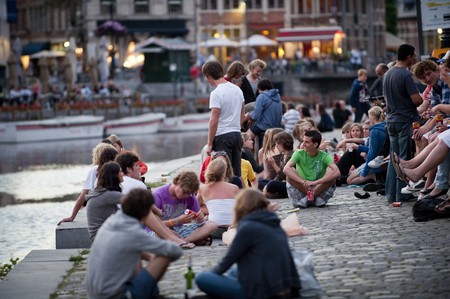 Relaxing by the river Leie | courtesy of Visit Gent

Bruges may have bagged the title of “most medieval city” in Belgium – and it admittedly is a sight for sore eyes – but Ghent’s historic credentials are more than up to snuff, and a quick stroll through the town core or old Patershol neighborhood should tell you as much. In fact, the 16th-century’s second foremost European city has more listed buildings than any other in the country. The Castle of the Counts, at one point the prestigious seat of power for Flanders, is one of them. The city also holds a special place in its heart for its trio of towers (St. Nicholas’ Church, the bell tower, and St. Bavo’s Cathedral), neatly visible from St. Michael’s Bridge and even more handsome when lit from beneath at night. 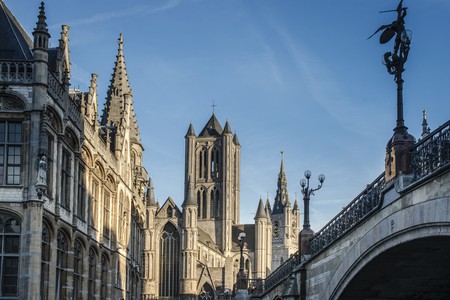 St. Michael’s, a bridge with a view | courtesy of Visit Ghent

When the days are darker and waterside lounging is not so much in the cards, even the most dedicated cinephile won’t be disappointed at Ghent’s movie offerings. Besides your standard 12-auditorium cineplex, a sturdy collection of independent theaters finds a loyal clientele in Ghent. With the better art house film at Studio Skoop, rare gems and academic debates at art school-run KASK Cinema, festival darlings at Sphinx, and niche experiments at OFFoff, chances are you’ll find your particular filmic tastes satisfied.

There’s a reason all three of the Flemish Foodies – Olly Ceulenaere (Publiek), Kobe Desramault (De Superette and an untitled new restaurant to settle in the newly transformed Belgacom Tower) and Jason Blanckaert (j.e.f.) – chose to strike down in Ghent. A young generation of chefs known as the Flanders Kitchen Rebels has long picked the city as the headquarters of its resistance against stuffy, Michelin-style rules – a resistance that, along with its passion for veggies straight from the patch, relaxed industrial décor, and sustainable cuisine, is slowly becoming the norm. Unpretentious eateries in the mold of De Superette, Alberte, j.e.f., Publiek, Oak, and Vos have foodies flocking to Ghent like bees to honey; the tone for Flanders has been set. 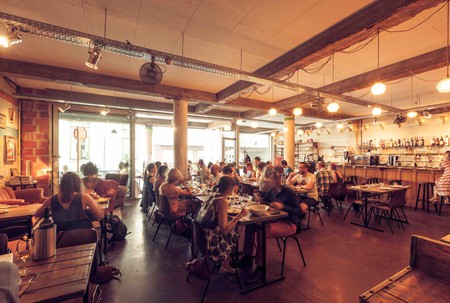 It’s home to the world’s most coveted painting

Few paintings in history have been the subject of such intrigue as Ghent’s The Adoration of the Mystic Lamb. With 13 thefts, a stint inside Austrian salt mines, and a rescue by the Monuments Men, the past of the 15th-century altarpiece by the Van Eyck brothers reads like a Hollywood movie (which it has, incidentally, inspired). At the moment, the 12-panel Renaissance masterwork hangs safely inside Ghent’s even older Saint-Bavo’s Cathedral, its original home before grandiosity-driven despots like Napoleon and Hitler made way with it.

The Patershol quarter is a wanderer’s paradise

Guarded over by the ancient Castle of the Counts, Patershol’s urban planning is positively medieval – meaning its cobbled backstreets criss-cross each other in the most confounding and charming ways. A relaxed afternoon is well spent sauntering through this cozy nest within the city, uncovering intimate eateries and art galleries around every corner. Feel your way around until you’ve spotted a 19th-century baroque façade with white letters on the windows that spell “Temmerman.” You’ve located the traditional confiserie that has been making Ghent life sweeter, one oddly named treat at a time – how about the classic cuberdon and a lutsepoepke or “wobbly bottom”? 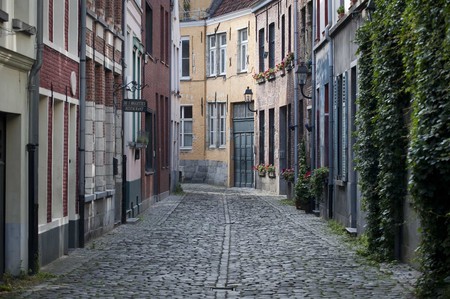 The Patershol (or Monk’s Hole), home to specialized artisans and intimate cafés | courtesy of Visit Ghent

Its state-of-the-art architecture is meant for everyone

Ghent likes to make its prestigious architectural projects as community-driven as possible. Exhibit A: brand-new city library De Krook by architects Coussée & Goris (old acquaintances from this list of Belgium’s most exciting architectural accomplishments, and Gentenaars themselves). The multi-layered wooden-and-glass construction with its coffee bars, pedestrian bridges, and squares is almost a city unto its own, one where inhabitants come together over literature and ideas. Exhibit B: the open Market Hall by Robbrecht en Daem en Marie-José Van Hee forms a lit-up canopy in the historic center. You can also add in the STAM City Museum and the new Holy Food Market that just set up shop in an old abbey, but you get the gist. 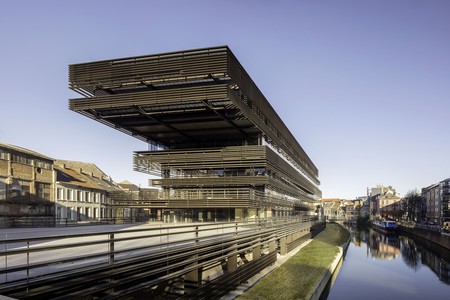 There are loads of lovely little green spots

There many green spaces in Ghent, as long as you know where to look. St. Peter’s Abbey, for example, hides a glorious back garden that functions as a public park. In spring and summer, the place smells like lavender, and a snooze among the vineyards will leave you with that dazed South-of-France feel. Another cozier green nook favored by picnickers and sunbathers is the Appelbrugparkje, overlooking the Leie river. On the grounds of the former Saint-Bavo’s Abbey, a group of hornbeam pillars imitates the vanished church. 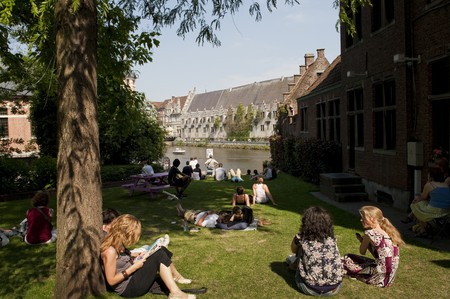 The waterside Appelburgparkje, a slice of tranquil green in the heart of the city | courtesy of Visit Ghent

In 2009, Ghent officially declared Thursdays meat-free, and that’s just the tip of the iceberg when it comes to the city’s commitment to the environment and a healthy lifestyle. While vegetarian eateries and vegan buffets can be hard to come by in smaller Flemish cities, Ghent is simply overflowing with them. Colorful biological markets are all around, salad and soup bars thrive, and bicycle-wise, the city has increasingly been following Amsterdam’s lead. 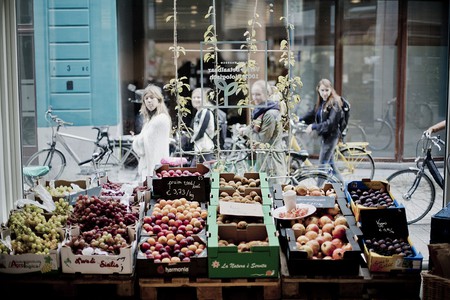 Looking out from Ghent’s BE O Market, where biological veggies come first | courtesy of BE O Markt

Its museums complete each other

Its S.M.A.K. (contemporary art) and previously mentioned street-art sanctuaries successfully showcase the talent of the day, yet Ghent’s also careful not to lose sight of the past. While the House of Alijn turns one’s eye to old folklore and the beauty of the everyday, the recently renovated STAM (the City Museum) provides an extensive journey of the city’s history in a remarkable complex that brings together a 14th-century abbey, a 17th-century monastery, and a 21st-century expansion. 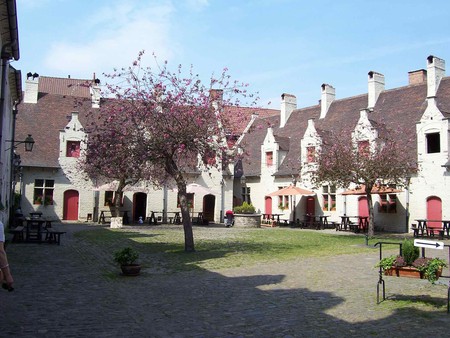 The House of Alijn, a place of folklore old and new, suitably situated in Ghent’s old Patershol quarter | courtesy of Visit Ghent
Give us feedback