11 of the Most Non-Touristy Experiences in Ghent 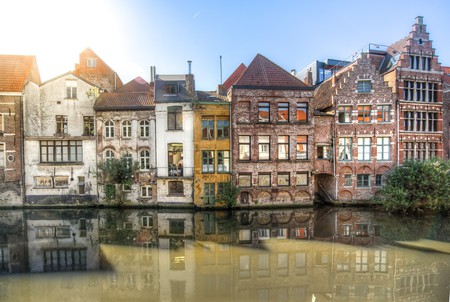 For those wanting to sidestep Ghent’s traditional tourist attractions, there are plenty of intriguing options to experience the Belgian city from a different point of view. How about an ancient abbey recreated with hornbeam bushes, or a delicacy that’s gets ironed when you order it? These 11 experiences and secret spots take you off the beaten path and into Ghent’s alternative heartland.

Listen to pianos and violins in ‘lover’s alley’

Follow the winding alley Biezekapelstraat behind St Bavo’s Cathedral, and it will lead you to an urban oasis. The little ‘Achtersikkel’ square, marked by one round and one rectangular tower and a water well, is a sight for sore eyes. A lot of the historic buildings here are now owned by Ghent’s music academy, meaning you might catch a practising student’s piano or cello tunes floating through an open window. No wonder this romantic spot also goes by the name of ‘lover’s alley’.

Treat yourself to a ‘gestreken mastel’

A cinnamon sandwich in the form of a bagel, cut in half and generously smeared with butter and sugar, put back together and then ironed (often with an actual clothing iron) into a flat cookie with caramelised sugar inside—this is the deliciousness that is a gestreken mastel, a traditional Ghent pastry. True gestreken mastellen have become somewhat of a rarity, though a lot of bakers will still make them un-ironed year-round to only whip out the iron on special occasions such as the official ‘mastellen’ season (the beginning of the hunt) and the annual festivities taking place in the medieval Patershol quarter. You can also get them from the pastry experts at Julie’s House (open Wednesdays to Sundays), around the corner from the Castle of the Counts. 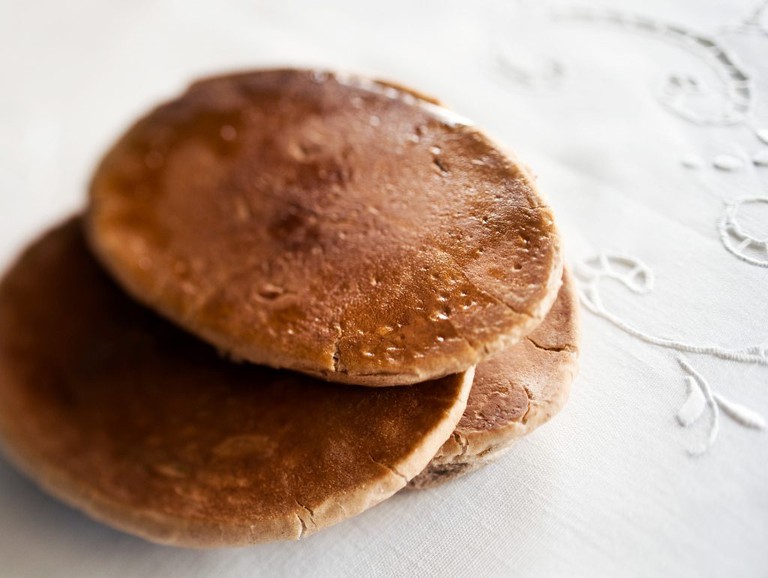 This old dock neighbourhood is slated to become a new residential area, but before the block is given over to the new kids, collective DOK has the freedom to unleash its creative energies here. Every summer, they organise film screenings, pop-up brunches, workshops, art exhibits, flea markets and so much more for the Gentenaar to live his or her best summer life. The urban beach that strikes down every year is an especially dandy cool-off spot.

Unwind on the Graslei

Yes, it’s classic tourist behaviour to stand on the Sint-Michiels Bridge and take pictures of the river Leie at the postcard-perfect Graslei quai. But it’s less touristy to grab yourself a canned beer from the night shop and mix with the young locals and students guaranteed to lounge here on beautiful summer evenings. 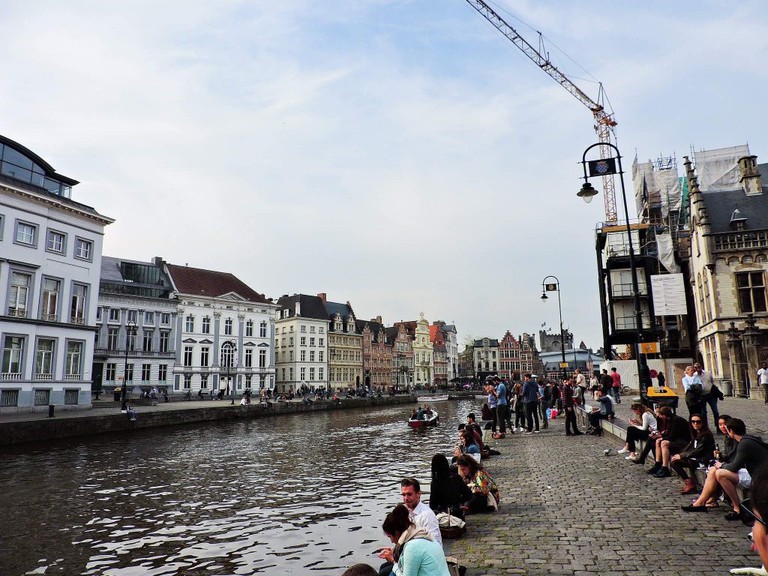 Get experimental at Art Cinema OFFoff

While St Bavo’s Cathedral still stands proudly watching over its city, not many people know about St Bavo’s Abbey. The grand 12th-century abbey, one of Europe’s finest, sat at the confluence of the river Leie and river Scheldt and was instrumental in the early development of the city, but it met an untimely end at the hands of Spaniards in the 16th century. The overgrown ruins that remain are a lovely green place favoured by locals from the peaceful Visserij neighbourhood, even more so since the five-meter-high (16.4 feet) hornbeam bushes were sculpted to recreate the original’s outline.

Open Fridays to Sundays during the summer months 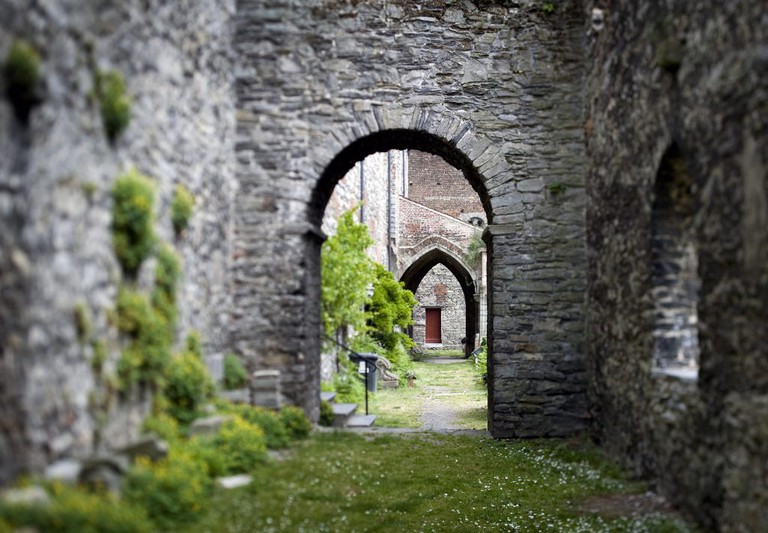 Even though it’s some way out of the city centre, you can count on a queue of locals shuffling up to De Frietketel’s counter. This slightly more ‘upscale’ friterie fries its crispy goldens in vegetable oil rather than the usual animal fat, and pretty much the whole of Ghent agrees that it doesn’t hurt the taste one bit. To top it off, they carry homemade vegetarian and vegan snacks, a rare luxury when it comes to Belgian friteries. Go on a Thursday, if you can, to honour Ghent’s official veggie day.

Unless a generous local clues them in, out-of-towners will generally walk past the surprising piece of springtime heaven that lies behind St Peter’s Abbey. The abbey’s slopes, landscaped into formidable terrace gardens in 1982, feature fruit trees, a herb garden and vineyards. A lot of student groups and couples have deemed it the ideal picnic and sunbathing spot, but you can still enjoy quiet days here. Find the old gate to the abbey’s right side, then cross the small courtyard. 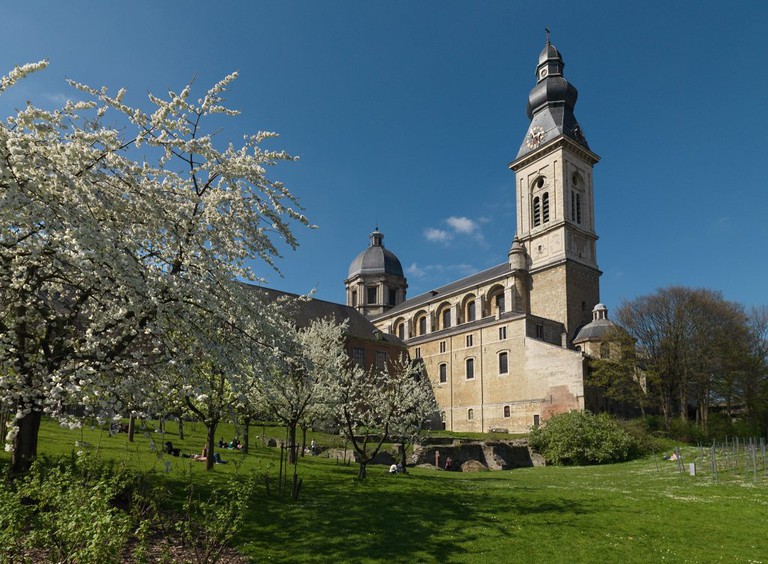 Pay your respects at Campo Santo

Lavender and lush tombstones best sum up Ghent’s Campo Santo, a 19-meter-high (62.3 feet) hill that is part of the large cemetery Sint Amandsberg and named after the eponymous one in Rome where artists and other notables are buried. A lot of painters, writers and sculptors – whose presence has caused people to refer to Campo Santo as Ghent’s Père-Lachaise – have shared their final resting place with the city’s most elite bourgeois families since 1847. The cemetery is still in use and recently added hailed Belgian cartoonist Marc Sleen to its pantheon.

Take a dip in history at an Art Deco swimming pool

Go underground for a concert

Ghent is home to a thriving underground music scene thanks to some multidisciplinary artist-run places that aren’t afraid to give new bands a shot. In de Ruimte is one of them (check their Facebook page for concerts, exhibits and something called ‘yoga drawing sessions’), as is Gouvernement, a large, white-walled industrial space. There is also Kinky Star, a youth centre on Vlasmarkt square that regularly provides a stage for alternative bands, and 019, a former welding factory turned concert venue at the North Docks.