10 Romantic Spots To Propose In Belgium 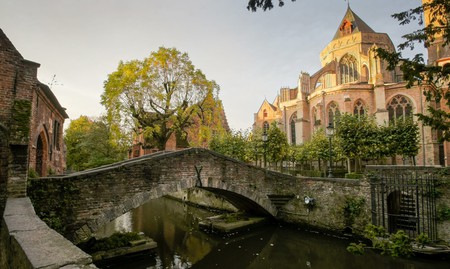 Belgium has a reputation for modesty and moderation, but when it comes to romance, the small country knows how to pull out all the stops. Just think of swoon-worthy Bruges, quaint Durbuy or historic Ghent. These ten Belgian proposal spots are sure to sweep your loved one off their feet.

On the bridges of Bruges

Once you realize the so-called ‘Venice of the North’ is positively bursting with charming bridges over crisscrossing canals, the dilemma becomes on which one to pop the question. Those with a fondness for folklore will want to go with the bridge at the Minnewater (or ‘Lake of Love’) where your proposal is boosted by the tale of Minna and Stromberg. After Minna died tragically, her warrior love is said to have buried her underneath the stream. Legend has it that lovers who walk across the bridge will know eternal love.

Giving the Minnewater competition is the Bonifacius Bridge, the eye-catcher in one of the most picturesque Bruges views you’ll ever see (and that’s saying something). It actually goes by the nickname ‘Bridge of Love,’ and its carved-in stone bench makes for the perfect spot to watch the swans float by as you build up the nerve to ask the question. 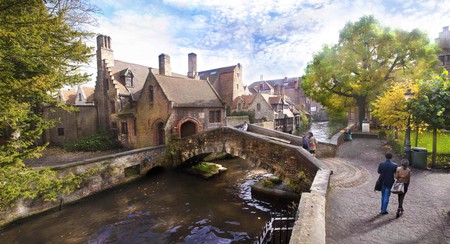 Underneath dozens of roses at Bruges’ Café Rose Red

If you get cold feet and don’t manage to get the words out on one of Bruges’ picturesque bridges, you might be in need of a drop of liquid courage. Café Rose Red, where roses dangle from the dark wooden ceiling and Trappist beers are in extensive supply, is just the place. Jovial owner and barman Kris deserves a matchmaking medal for all the proposals this romantic hideout has inspired.

In the middle of the Hallerbos when the bluebells bloom

A carpet of vibrant blue flowers that stretches out as far as the eye can see – the ancient forest of Hallerbos, with its sequoia trees, has always been prime hiking territory, but popularity always spikes at the end of April and beginning of May when nature lovers from all over Europe come to witness the magnificent display of thousands of bluebells blooming at once. Timing on this one can be tricky as the magic only lasts for seven to ten days and differs a bit in schedule depending on the weather, but when you get it right, you can drop on one knee amidst a sea of deep purple-blue and flowery fragrances. Follow the bluebells’ timing here.

In colorful Durbuy during fall

Cobbled alleys, a quirky topiary park, an old-fashioned jam factory – the small town of Durbuy in the forested Ardennes is as endearing as it sounds. Fall in this well-preserved medieval village – officially and remarkably a city, which is why they’ve embraced the nickname ‘the smallest city in the world’ – is as quaint as anything ever was. Propose on a walk through the orange-and-yellow colored woods or in one of the many snug bistros. 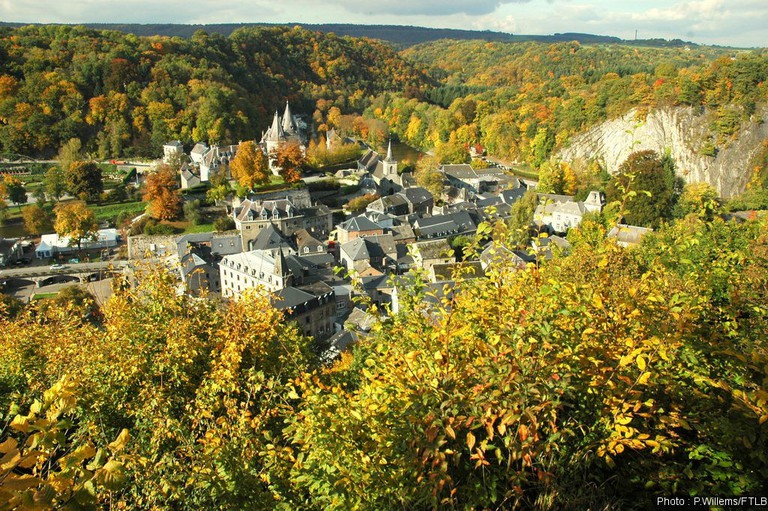 The square of Antwerp’s medieval fortress Het Steen (‘The Stone’) is a prime location to appreciate the sun going down over the river Scheldt. Hold each other’s hand while watching giant ships float by or make your way to the left bank via the Saint Anna Tunnel with its old-fashioned wooden escalators to get a gorgeous sight of the old center’s skyline. 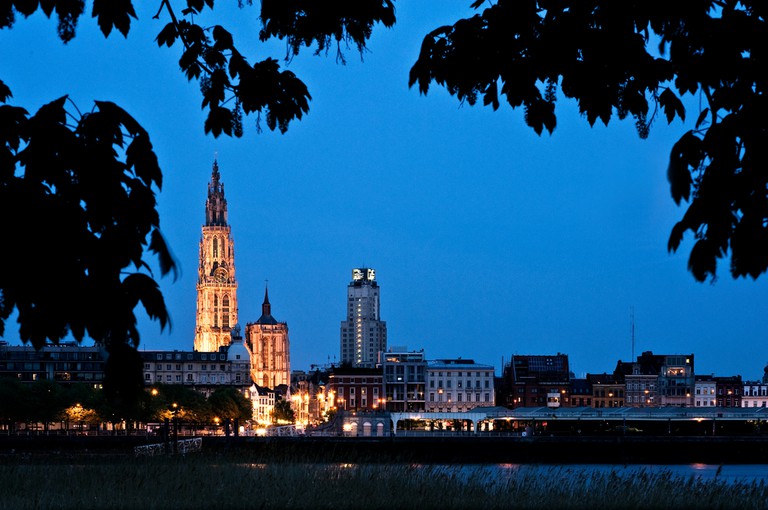 While stargazing at the Beisbroek planetarium

Taking your sweetheart for a romantic evening of stargazing usually goes over well, so why not go bigger for your proposal? Beisbroek’s planetarium on the outskirts of Bruges projects over 7,000 stars on its dome and takes you to the rings of Saturn while advanced telescopes provide views of the moon, planets, and sometimes even the lights of a far-off galaxy. Once your partner has been sufficiently wowed by the power of the universe, you’re free to make your move. Check their calendar to make sure there’s a presentation in your language.

In the garden of a marvelous Brussels patron couple

Talking about extraordinary lovebird activities, David and Alice Van Buuren spent their life together transforming and perfecting their Brussels home into a complete work of art. It was the wish of the patron couple that their villa and its masterful Art Deco interior be turned into a museum, but not before Alice had renowned landscape architects Jules Buyssens and René Pechère design the gardens. Surprise your partner in Buyssens’ green labyrinth or Pechère’s especially heartstring-tugging ‘Garden of Hearts,’ Alice’s homage to her late husband. 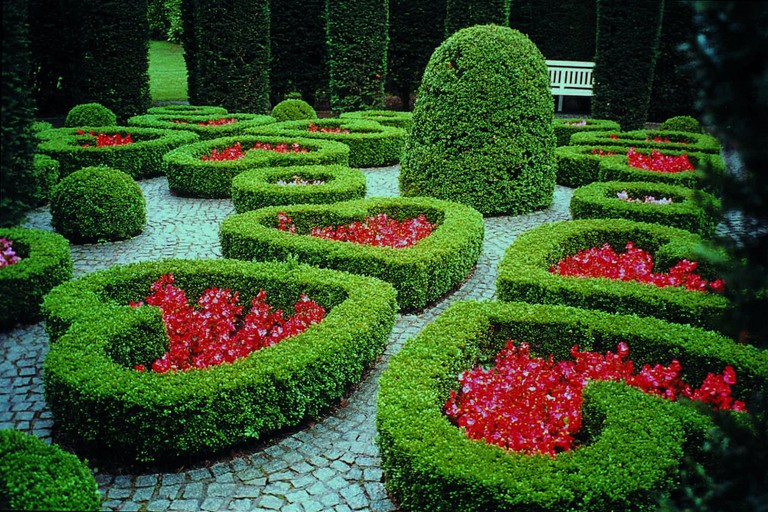 Most romantic among the Belgian coastal towns is the tranquil De Haan, where a little red-roofed pavilion provides grade-A proposal scenery. Standing atop a 31-meter-high dune (the second highest in the country), the ‘Spioenkop’ functions as a lookout post onto the North Atlantic. After climbing up and taking a deep breath, admire the sights and wait for the right moment to arrive. 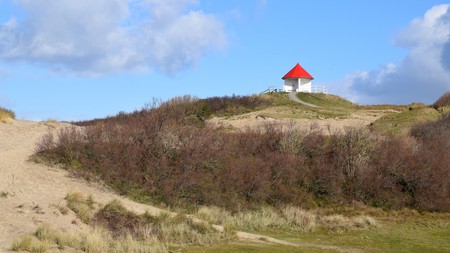 In the lush green gardens of Le Botanique

Former greenhouses to the National Botanic Garden and current popular concert venue and cultural center, Le Botanique in Brussels boasts marvelous lawns. Surrounded by high-rises and concrete on every side, the garden to the complex is an oasis of well-kept greenery to which couples can flee. Sitting on its benches and listening to the melodious sounds escaping from the glass Orangery can make for a mightily romantic evening. 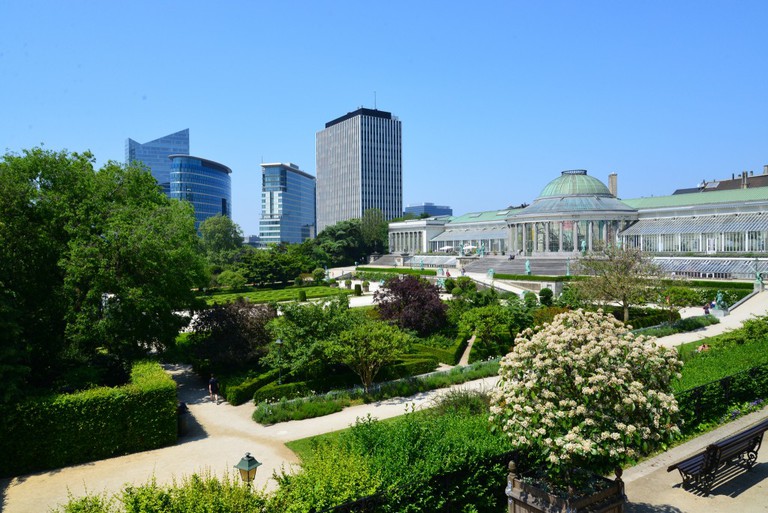 Amidst lavender and vines in Ghent

A green paradise in Ghent that remains a secret even to some locals, the garden of St Peter’s Abbey easily transports one’s thoughts to the south of France. Lavender scents grace the nostrils and vines provide shade as you surprise your love with more than a spring picnic.