10 Reasons Why You Should Visit Brussels 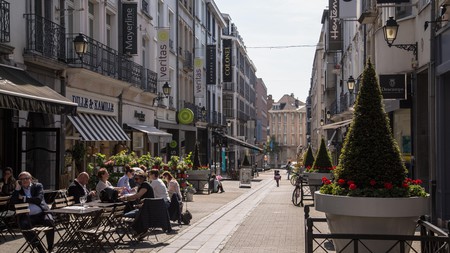 Peel back Brussels’s stuffy veneer to discover legendary jazz clubs, comic-book heroes and, most famously, peeing statues. Make sure to see all this and more on your trip to the Belgian capital.

Near the end of the 20th century, Victor Horta started turning his birthplace into the playground for his experimental architecture – and boy, did that work out for the Belgian capital. Glorious Art Nouveau buildings remain the highlights of neighbourhoods Ixelles and Saint Gilles to this day. Besides the townhouses that pioneering Horta designed for Brussels’s dignitaries, other Art Nouveau must-sees include the Musical Instruments Museum, with its striking cast-iron turret, and the Royal Greenhouses. 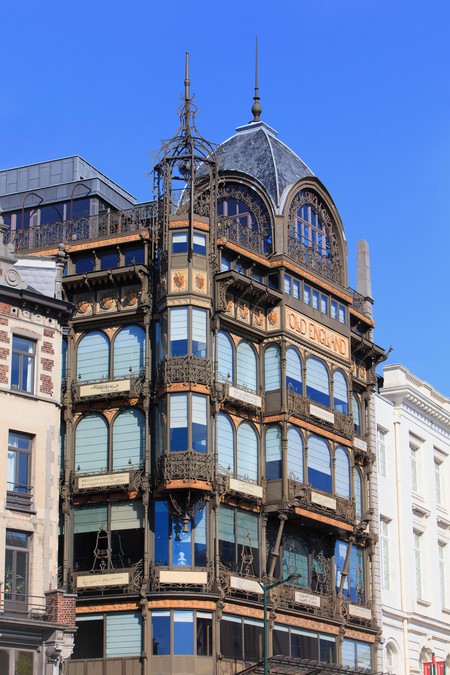 Brussels is often grossly underestimated in terms of its cultural offerings, but that underdog status does hold secret advantages. At the Royal Museums of Fine Arts, you’ll find seminal paintings by Rubens, Bruegel and other Flemish artists, with a nearly non-existent line during weekdays. The same goes for its next-door neighbour, the Magritte Museum, whose surreal treasures are accessible for viewing without a lengthy wait. 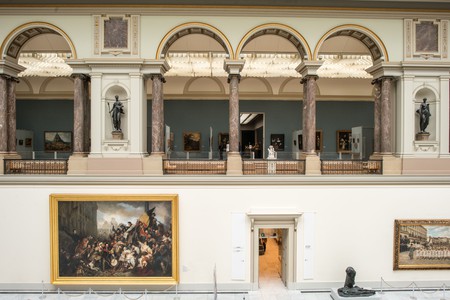 It’s the political heart of Europe

As the home of the European Union’s headquarters, Brussels is where major political decisions and laws are made. The city has several buildings dedicated to the EU, from the Berlaymont to the brand-new, eco-friendly headquarters and its humongous lantern-like structure. 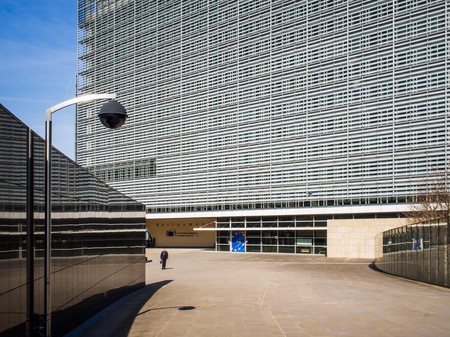 You can hop on the comic trail

From The Smurfs to Blake and Mortimer and Marsupilami to Tintin, it’s astounding just how many cartoons were created in Brussels. Once you learn that fact, the city won’t let you forget it either. Walk through its streets and you’ll see colourful comic-book characters looking out from over 40 different frescoes. It’s safe to say Bruxellois are masters of the ninth art. 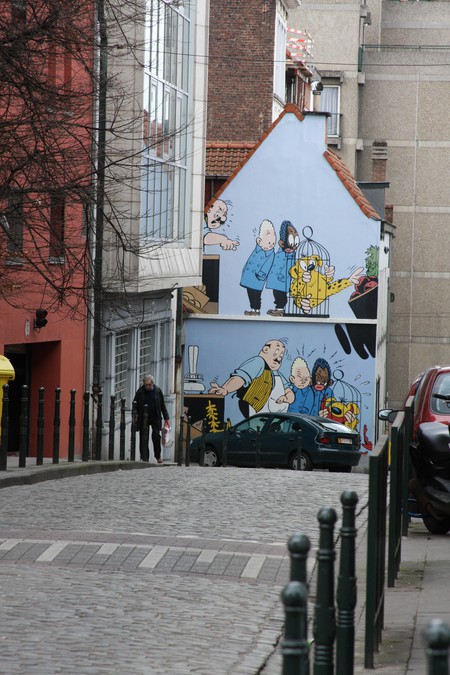 There are centuries of history to be discovered

Having been founded as far back as AD 979, Brussels is a venerable old lady. And it shows: her Grand Place is a well-preserved masterpiece of late Medieval architecture, and the ruins of her ancient seat of power, the Coudenberg Palace, are accessible thanks to recent excavations. In fact, long before there was a Belgium, there was a Brussels. For eight centuries, the city bloomed to eventually become the capital after the Belgian Revolution, which spilled from its La Monnaie theatre into the streets in 1830. 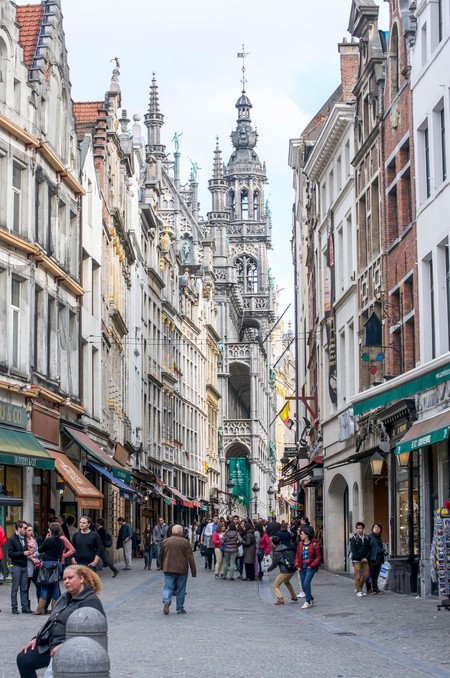 Nat King Cole and Miles Davis have tickled the keys of L’Archiduc’s piano. The Art Deco jazz bar, with its neon-blue lettering and doorbell you have to ring to get in, is just one of the places jazz enthusiasts will find themselves frequenting when in Brussels. As the birthplace of legendary harmonica player Toots Thielemans, it’s no surprise jazz is so adored here. Groovy dens include the New York-style The Music Village; Jazz Station, located inside a renovated 19th-century railway station; and the shabby but cosy Sounds Jazz Club. 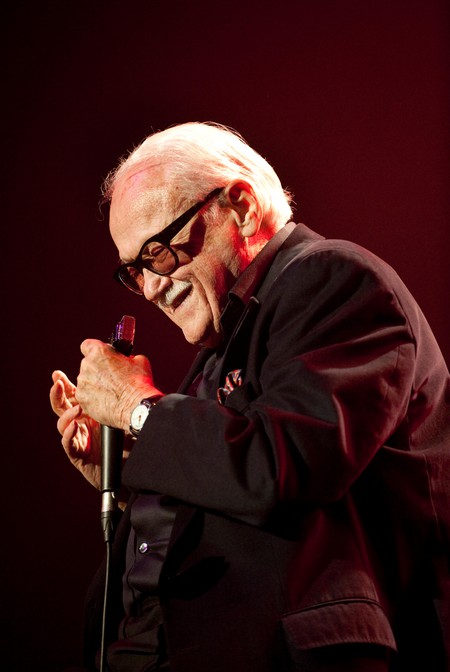 Hang out at artist haunts

Conveniently located between – and no doubt overshadowed by – Paris and London, Brussels has long functioned as a pied-à-terre for international artists. That certainly includes the French, who came to the city in droves during Napoleonic rule. Victor Hugo spent many hours walking back and forth between his mistress’s abode in the Galeries Royales Saint-Hubert and the intelligentsia hub Café du Vaudeville next door, which was also frequented by Karl Marx and Auguste Rodin. You’ll also find traces of genius at La Fleur en Papier Doré, whose walls feature the scribbles of René Magritte and his Surrealist friends to this day. For more recent history, venture to the Lord Byron, where Barry Jenkins penned the Academy Award-winning screenplay to Moonlight (2016) over a “Four Roses with just a splash of Grand Marnier. One rock.” 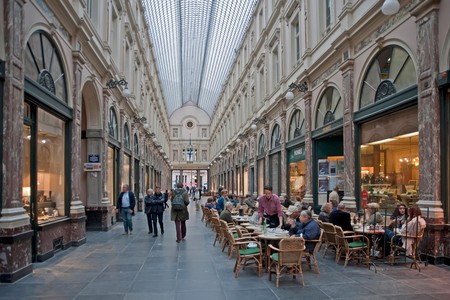 It’s a flâneur’s and drinker’s delight

Other cities might have you running around trying to see all the sights, but there’s something about Brussels that simply takes the pressure off. It’s OK if you go to the Atomium and visit every one of the metal wonder’s nine balls. It’s also perfectly acceptable – and wholly culturally appropriate – to sit on the terrace of Moeder Lambic all day, sampling Belgian beers ’til the sun goes down. If shopping is more your thing, head to the Galeries Royales Saint-Hubert. 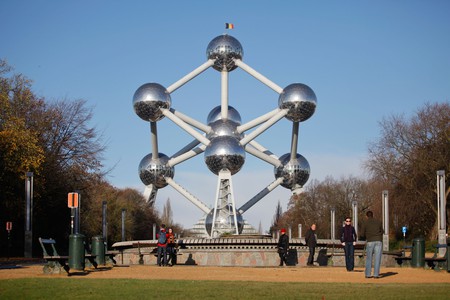 The first idyllic green spot you’re likely to bump into is landscaping champ’s René Pechère’s Jardin du Mont des Arts, though it should, by no means, be the last. Making it a mission to find Brussels’s beautifully landscaped gardens and parks is a recipe for a soothing, uplifting afternoon. In Sablon, the Place du Petit Sablon stands out as a peaceful nest no matter the season, surrounded by 48 bronze statues that depict the region’s ancient professions. The former National Botanical Garden, Le Botanique, is now a thriving concert venue, but its impeccably kept garden with its rare trees is worth a visit even when there’s nothing else going on. Lastly, the Parc Tournay-Solvay, a little outside the centre, has landscaped shrubbery and a rose garden to die for. 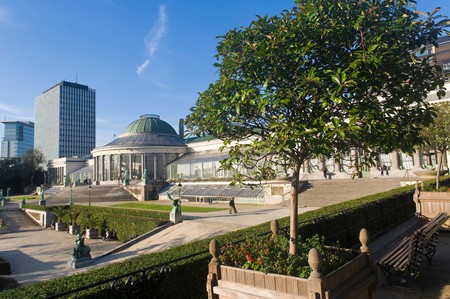 The rebellious Manneken Pis and the funny-looking Atomium aren’t Brussels’s foremost symbols for nothing – they embody the city’s quirky character and the self-mockery by which Bruxellois tend to define themselves. That includes an enjoyment of questioning reality, in signature Ceci n’est pas une pipe fashion – something exemplified by Het Zinneke, another peeing statue, this time of a dog merrily doing his business against a pole on an unremarkable square, almost lifelike from afar. Over the years, pieces of the Berlin Wall have ended up in Brussels, some of the city’s streets have been named in the local dialect and an underwear museum has popped up. Safe to say the Belgian capital embraces the unusual. 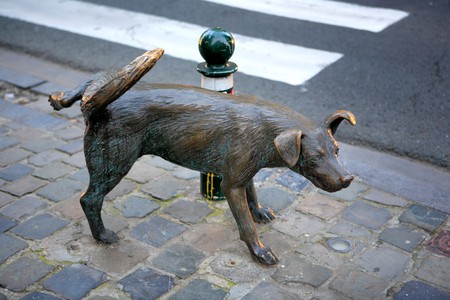