10 Of The Most Romantic Restaurants In Belgium

10 Of The Most Romantic Restaurants In Belgium

Le Wine Bar des Marolles | Courtesy of Le Wine Bar des Marolles
Lovebirds visiting Belgium are in luck these days. Dotted across the country are cozy wine bars and intimate eateries serving up everything from Eastern-inspired woks to Flemish comfort food for a romantic evening out. These ten establishments all share a warm, inviting atmosphere ideal for those on a getaway for two.

Bar, Bistro, Restaurant, Wine Bar, Belgian, Wine, $$$
Le Wine Bar des Marolles | Courtesy of Le Wine Bar des Marolles
Run by sommelier Vincent Thomaes, renowned from his Château du Mylord days, Le Wine Bar des Marolles is an especially cozy option at Brussels’ Sablon. While it’s perfectly acceptable to spend the evening in the intimate 17th century establishment gazing into each other’s eyes over nothing more than a good glass of red and some tapas, their main dishes exploit the best of quality local produce, and hence worth a try as well. Homemade bread and butter are just the tip of the iceberg for this restaurant, which has also opened an authentic delicatessen shop next door.
More Info
Open In Google Maps
198 Rue Haute, Bruxelles, Bruxelles, 1000, Belgium
+3225036250
View menu
Visit website
Visit Facebook page
Send an Email
Give us feedback

Charcuterie, Restaurant, Italian, $$$
The olive green corner building of Winehouse Osteria takes the idea of cozy to new heights. This extremely petite Italian eatery is open from morning to evening for your every romantic need, be it a cautious first coffee date or a full-on romantic dinner. The typical pizzas have no place here, as owners Mario and Piero like to stick to dishes they know will pair well with their excellent wine selection, which traverses the entire Italian boot.
More Info
Open In Google Maps
42 Rue de la Grande Ile, Bruxelles, Bruxelles, 1000, Belgium
+3223500921
View menu
Visit website
Visit Facebook page
Send an Email
Give us feedback

This charming Antwerp eatery is one for the vegetarian lovebirds. Bites and Wines may look a bit bombastic on the outside, but don’t be offended by the loud colors – you don’t want to miss out on some of the port city’s best vegetarian food. Bring a big group of vegetarian buddies or a date and enjoy guilt-free plates paired with a bottle of vegan wine.

Over a quarter of a decade old and still going strong as one of Antwerp’s most romantic hotspots, Huis de Colvenier has garnered a reputation for its steady, continuous excellence. Patrick Van Herck has been giving a modern twist to French cuisine for decades in this old patrician house, always respecting the seasons in which ingredients works best. The ‘special experience’ formula grant couples access to the 19th-century wine cellar while sipping aperitif and a peek into the chef’s pots while he and his team cook up a storm. 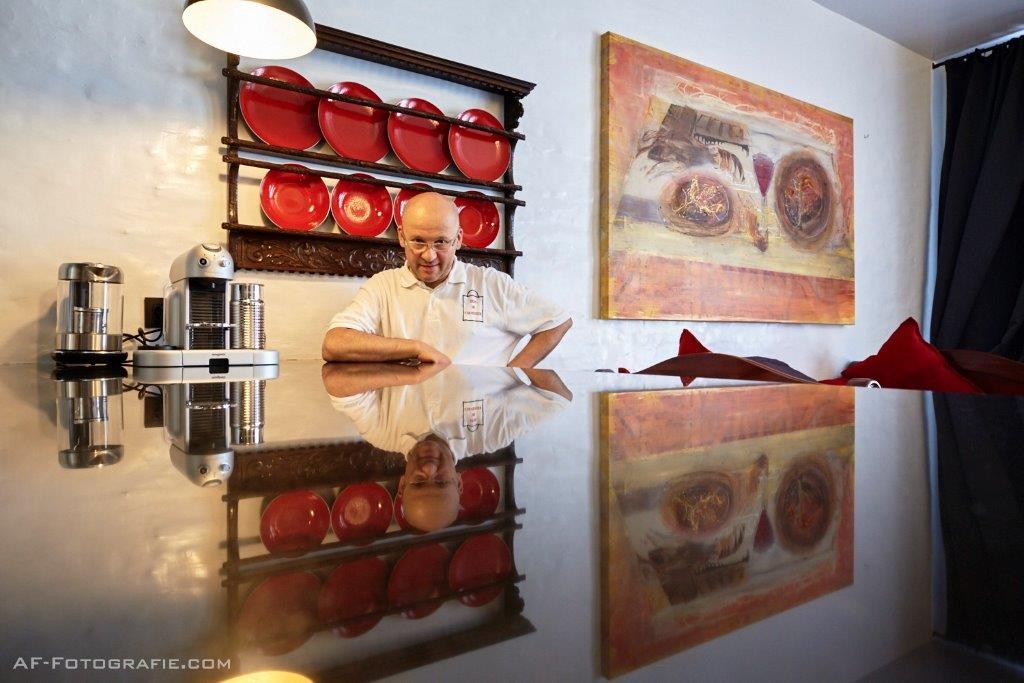 Restaurant, Belgian, Dessert, French, $$$
It took less than a year for Olly Ceulenaere – part of the chef trio know as the ‘Flemish Foodies’ – to reel in a Michelin Star with his long-awaited restaurant since its inception in 2014. The warmly lit Publiek has drawn delighted couples to Ghent ever since. Don’t expect tablecloths or snazzy chairs but an open kitchen with seasonable dishes at reasonable prices, often delivered to your table by the chef himself. Their outdoor lighting – replete with reassuring quote signage – is a particularly nice touch.
More Info
Open In Google Maps
39 Ham, Gent, Vlaanderen, 9000, Belgium
+3293300486
View menu
Visit website
Visit Facebook page
Send an Email
Give us feedback

If you’re looking to spend a romantic day in Ghent, you might want to combine a lunch date at Publiek with an Italian follow-up at Le Baccanti. Start the night off with an aperitif while lounging in the cozy salon with authentic brick fireplace downstairs. This intimate inn with its tiny round tables and good selection of organic wines has a way of making you feel at home with your pasta dinner.

World cuisine and a good wok dish is what you and your partner will find at A Food Affair. Chef Laurent Loquet has spent time traveling through Asia, a fact reflected in the ease with which he turns out an Eastern-inspired menu without any native assistance in the kitchen – and in the travel pictures hanging on the walls. Both his curries and the stylish snug space itself will leave you and your date feeling warm and fuzzy.

Bistro, Brasserie, Restaurant, Belgian, European, $$$
No other restaurant in Hasselt is of such as small scale and personal feel as Bistro Nano. Seating is limited to eight tables, all of which bathe in candlelight as soon as the sun sets. Old wood and mosaics play a big part in the decoration of this warm brasserie, where chef Marijn Carremans serves up great traditional Flemish food of the comfort variety. A good choice to hide out with friends or a lover during nostalgic autumn nights.
Permanently closed
More Info
Open In Google Maps
12 Lombaardstraat, Hasselt, 3500, Belgium
+3211915363
View menu
Visit website
Visit Facebook page
Send an Email
Give us feedback

Restaurant, Italian, Vegetarian, European, $$$
It doesn’t get much more swoon-worthy than a stroll at Bruges’ Minnewater (the ‘Lake of Love’) and a smooch on its bridge, followed up with dinner at La Gondola. Sitting in the red velvet pizza restaurant with medieval canals criss-cossing outside, the ‘Venice of the North’ holds true to its name.
More Info
Open In Google Maps
22 Oude Burg, Brugge, Vlaanderen, 8000, Belgium
+3250685298
View menu
Visit website
Visit Facebook page
Send an Email
Give us feedback

Restaurant, Italian, $$$
Etna Trattoria | Courtesy of Etna Trattoria
Home-y Sicilian cuisine cooked with vegetables shipped in straight from the homeland: Etna Trattoria is all about authenticity, on your plate and in the décor. Owners Lorenzo and Kim serve up their Sicilian treats in a cozy corner house just outside the busy city center. Small, tiled tables ensure you and your date will dine in close proximity.
More Info
Open In Google Maps
123 Tiensestraat, Leuven, Vlaanderen, 3000, Belgium
+3216651873
View menu
Visit website
Visit Facebook page
Send an Email
Give us feedback
Give us feedback