Mur BD Ric Hochet (detail) | OliBac/Flickr
One of the most fun and unusual ways to explore Brussels is by taking the Comic Book Route. The project started in 1991 with the intention to embellish empty walls in the city, while paying tribute to famous Belgian comic artists. The route itself features over 50 mural paintings from iconic greats to lesser-known characters. Embark on a short journey to discover 10 of these street art gems within the famed comic capital.

The Broussaille Wall was the first comic strip mural to be painted in July 1991. The wall illustrates a cheerful couple, Broussaille and his girlfriend, going for a brisk walk around the city. Based on a comic series created by Frank Pé, the series was first published in 1978 and was printed in the nature section of Spirou magazine. The author doesn’t deny that the main character is an alter ego. 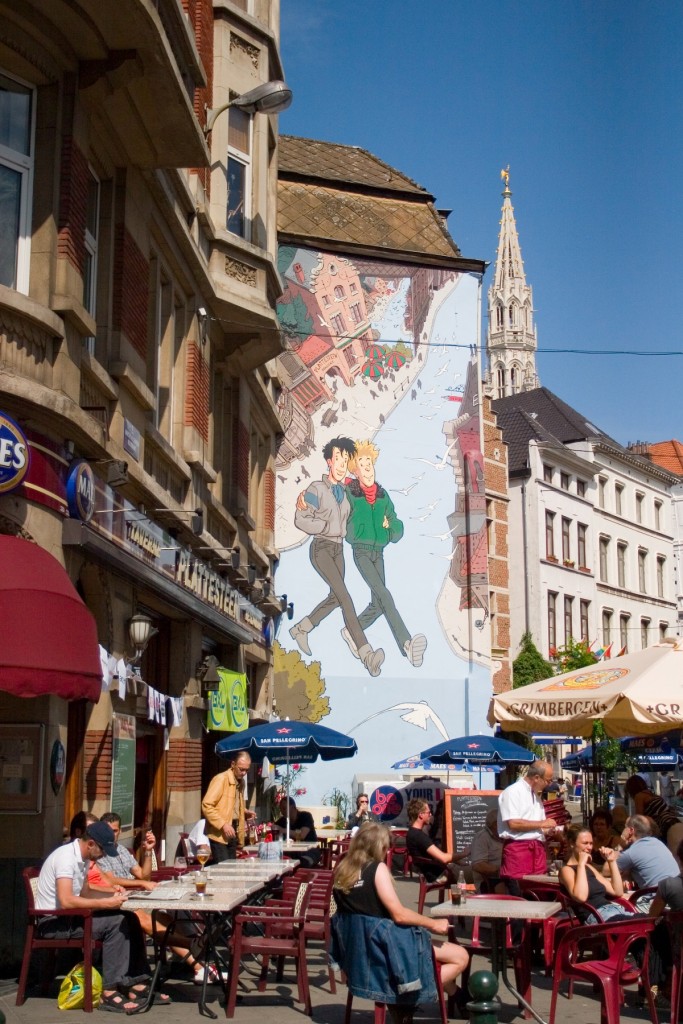 Not too far from the Broussaille Wall is the Victor Sackville Wall. The scene on the wall comes from The Opera of Death, the first comic of the Code Zimmerman series created by Francis Carin. Here, the main character Victor Sackville – a British spy that lands in Brussels – is introduced. Interesting fact alert: the street scene represents the Rue du Marché au Charbon as it looked during WWI. 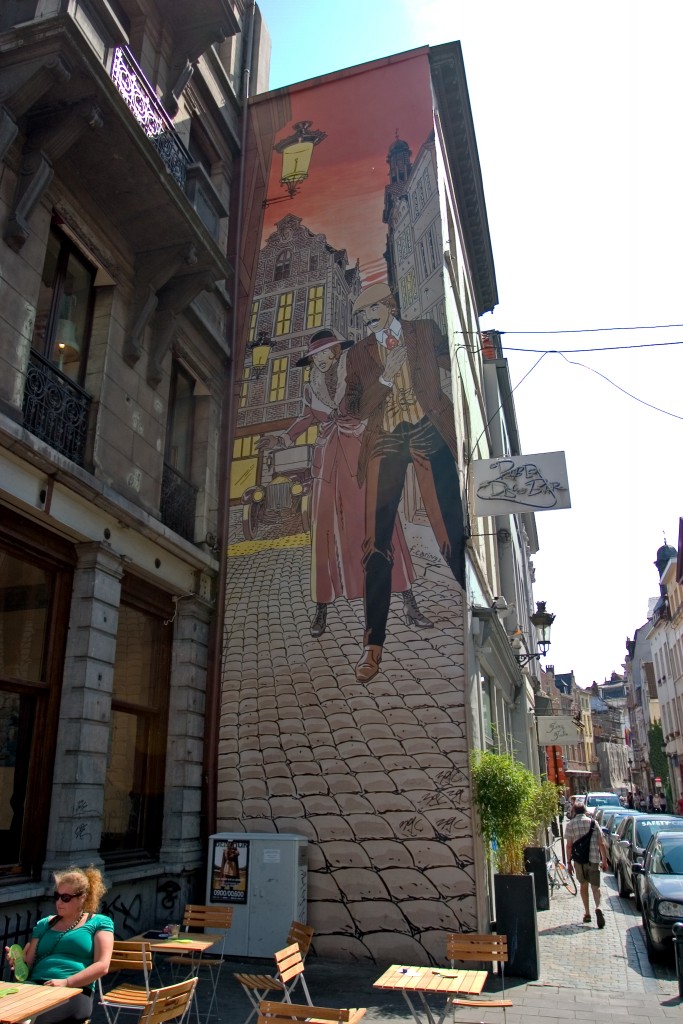 Just a few strides from Manneken Pis is one of the most festive comic strip murals. The Olivier Rameau Wall attracts a lot of attention. The fantasy series was invented in the 1968 by cartoonist Dany and writer Greg. In this comic series, Olivier, Mr. Relevant and stunning beauty Dove Tiredaile join in on fun adventures in a world full of fantasy and dreams. 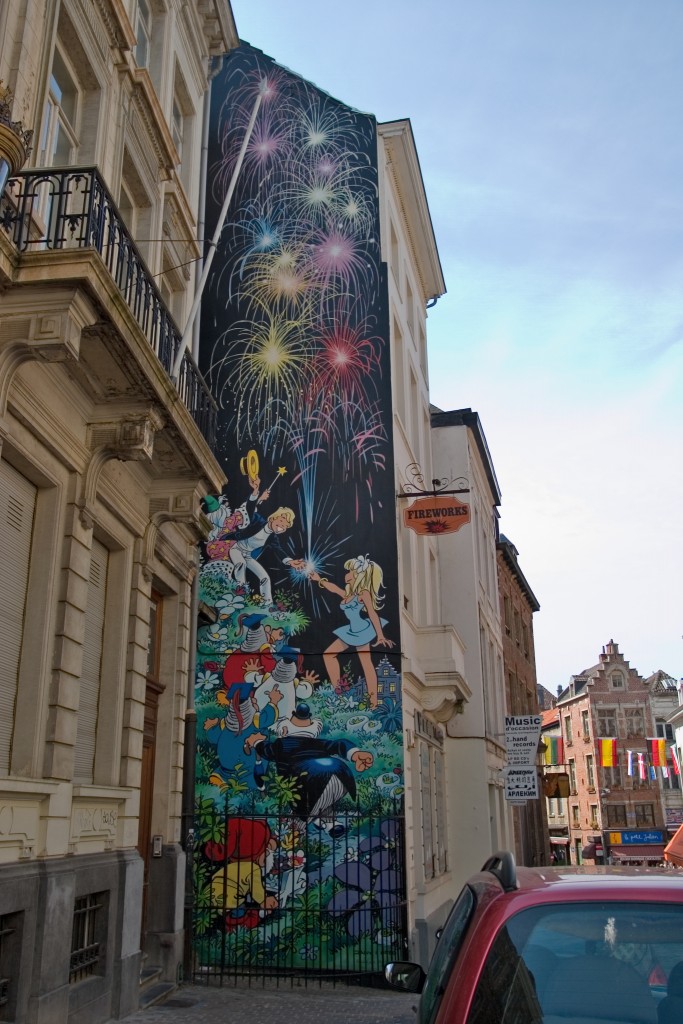 The brilliant mural by Jeune Albert is a drawing of Yves Chaland, one of the greatest French cartoonists that nobody recognizes. He was killed in a car accident when he was 33 and hardly had time to make a breakthrough. Renowned artists reference him as great example, and collectors fight over the modest collection of work that he left behind. Here, Chaland’s comic about outrageous, cruel boyish pranks of a kid growing up in post-war Brussels is replicated. 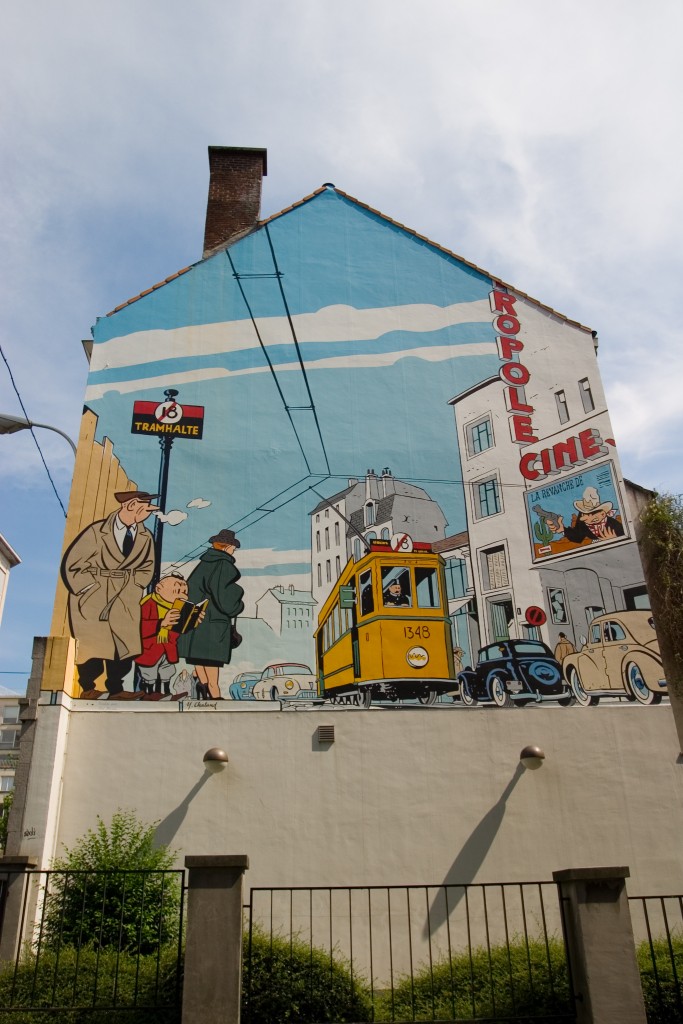 The Ric Hochet Wall was designed in 1994 by G. Oreopoulos and D. Vandegeerde. This comic strip mural represents the famous hero Ric Hochet, illustrated by Tibet and Duchâteau. The adventures of this savvy reporter started in magazine Tintin on March 30, 1955. Over the course of 78 albums, he outplayed the most dangerous lunatics and the biggest charlatans. 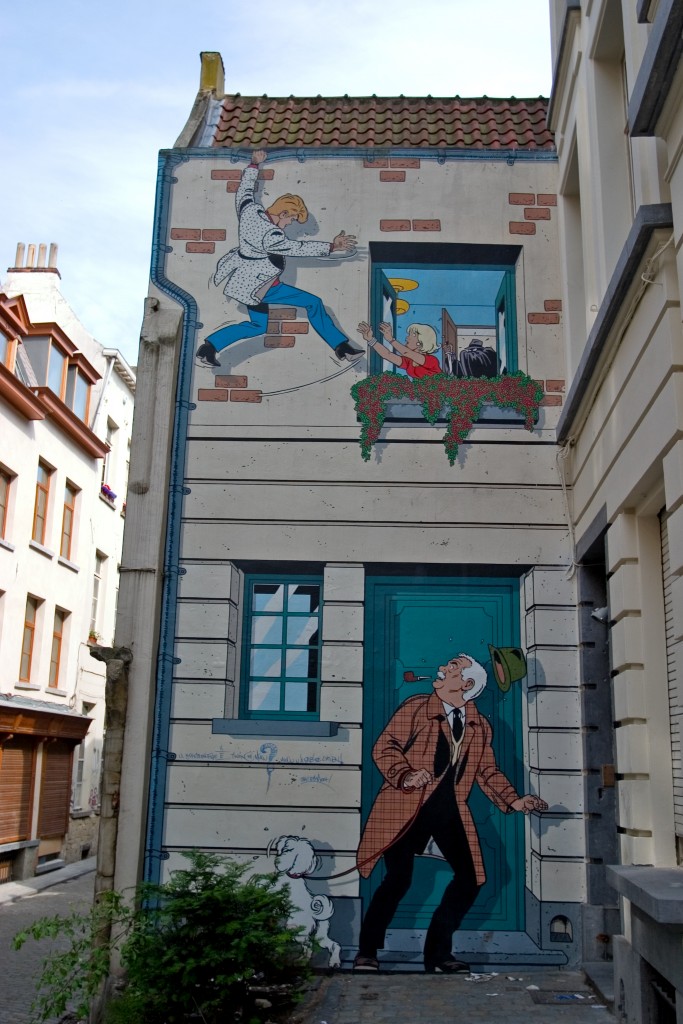 Building
The famous creation of Franquin, Gaston Lagaffe smiles down from the tall and narrow side wall of the building at Rue de l’Ecuyer. The wall was painted in February 2007, and it shows the famous hero having fun. This comic character made his debut on February 28, 1957 in Spirou magazine. Gaston was the first anti-hero and the most socially critical clown in Franco-Belgian comic strips.
More Info
Open In Google Maps
Brussels, Belgium

Shop
Nero, the famous character created by the Flemish artist Marc Sleen, is painted on a wall behind the Halles. On the mural, you will also recognize several other heroes from comics by the same author – Nero’s genius son Halyard, chip shop owner John Samson, among others. Nero’s adventures appeared in Catholic-Flemish newspapers for more than 50 years.
More Info
Open In Google Maps
Brussels, Belgium

Situated in the Marolles district, the Jojo Wall illustrates the small but priceless moment in life of a 7-year-old boy. Jojo is a comic strip created in 1983 by André Geerts. The strip is about the small-scale, real life but humorous adventures of a cheerful boy who lives with his grandma in a place where the city meets the countryside. A drawing style of the author was dynamic and fragile, with lots of curves and pastel colors. 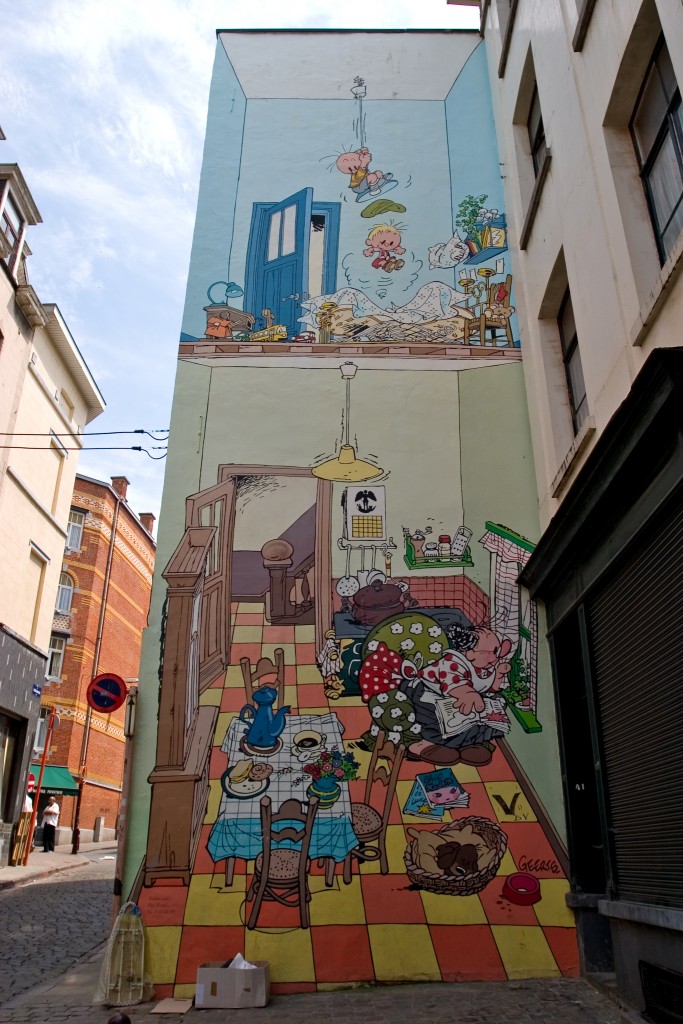 A few strides away you’ll find the Laurent Verron drawing, the beautiful lady so gallantly helped by a sturdily built missionary and his frightened novice. This is the famous cabaret singer and dancer, Josephine Baker. You can tell that she’s the star of this mural, yet she only plays a role in three of the seven comics. The madcap series tells the adventures of missionary Odilon Verjus and young novice Laurent de Boismenu. This comic series includes some historical events and characters like Edith Piaf, Hitler and John Wayne. 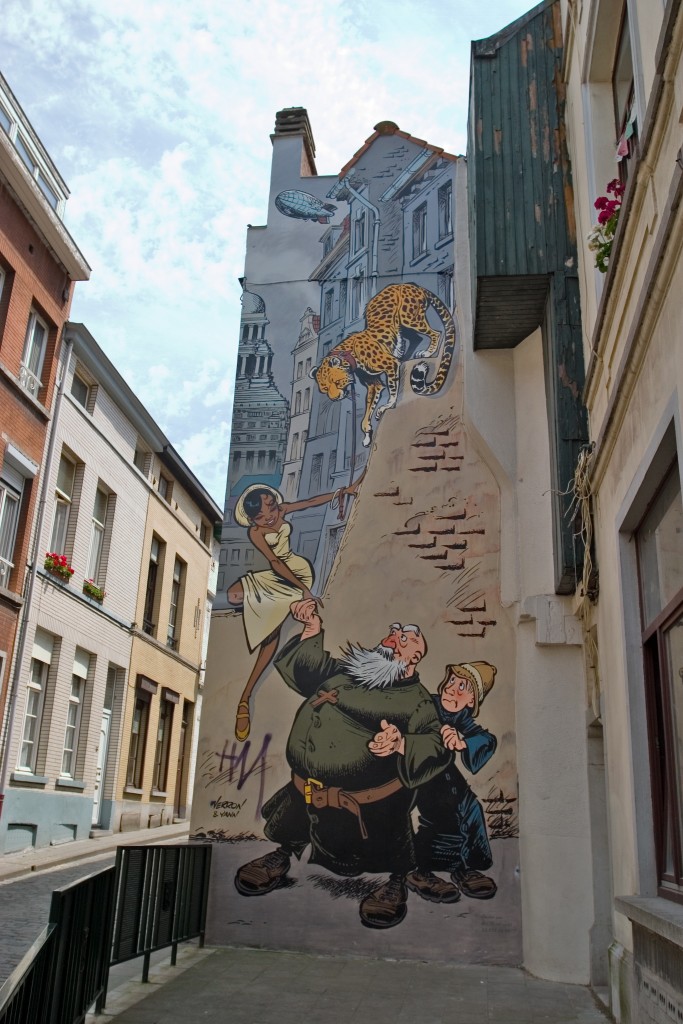 Next stop is the Blondin and Cirage Wall, which is a drawing from comic strip series created by godfather and pioneer of the Belgian comic strip Joseph Gillain, who was also known as Jijé. The series features two young boys, Blondin who solves problems through reasoning and his crazy friend, Cirage, who prefers direct action. They savored their first adventures between 1939 and 1942 in Catholic magazine Petits Belges. 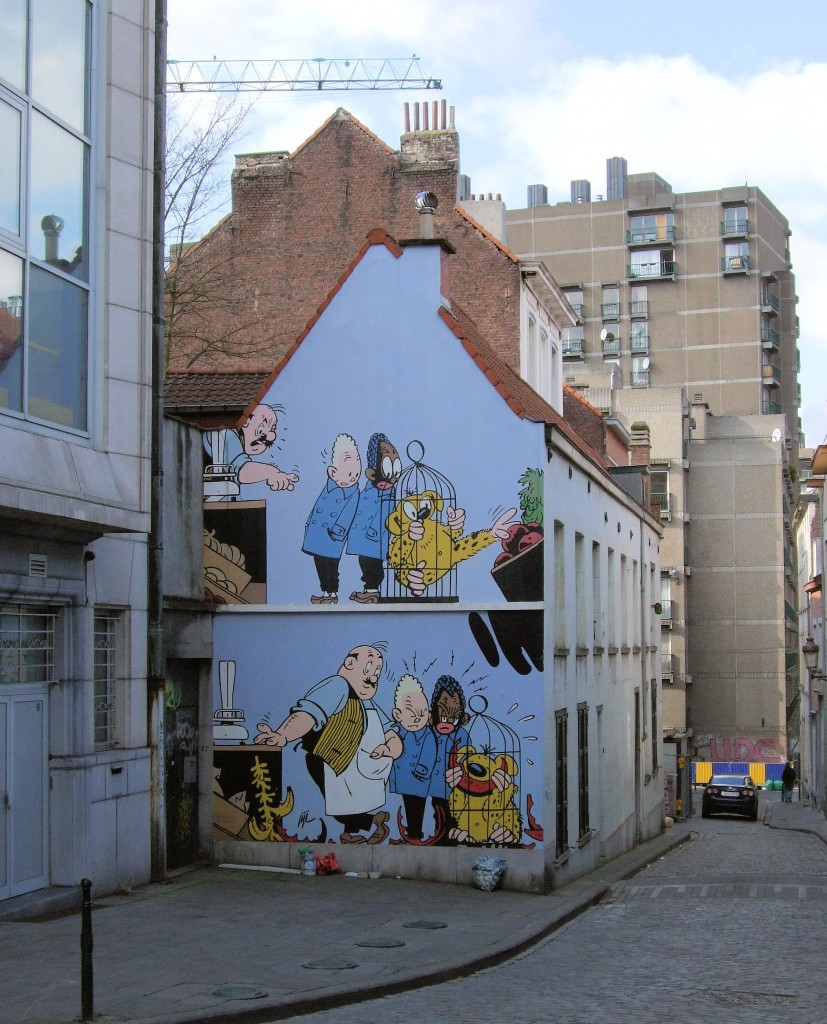