10 Indie Bands From Belgium You Need To Listen To 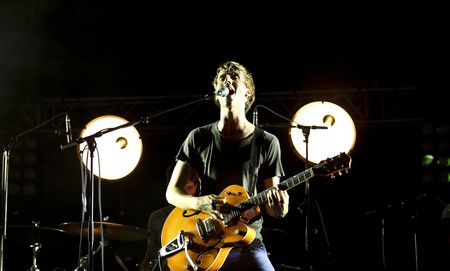 When considering Belgian music, artists like Jacques Brel or Stromae often come to mind. While they are proud examples, the small country’s independent music scene has been demanding equal attention as of late. It thrived in the so-called noughties and 2010s, producing garage rock with soul, dreamy electropop lusted after across continents, and musical chameleons that simply refuse categorization. Treat your ears to the following ten Belgian indie bands.

Oscar and the Wolf

Dark alternative pop, modern soul, electronic dance beats – Oscar and the Wolf has been a 2014 revelation. The brainchild of Max Colombie, it’s brought the appeal of melancholy electropop to a large audience’s attention when Entity debuted to flattering reviews and concerts sold out months in advance. Colombie’s deeply longing voice, not to mention his increasingly enigmatic stage persona, have made live performances a dive into an ocean of ethereal, sensual electronics. Emerge on the other side hypnotized and hooked forever.

Formed in 2004, five-piece indie rock band Balthazar has released three albums – Applause (2010), Rats (2012), and Thin Walls (2015); while the first two were self-produced, they teamed up with Ben Hillier (Blur/Depeche Mode producer) and Jason Cox (Gorillaz, Massive Attack) for the latter. Listening to all three in a row, the evolution is palpable: the rhythmic beat and soothing vocals of Applause become much more intense and mysterious by the time Rats rolls around, culminating in the melodically accomplished Thin Walls. Balthazar delights in describing the weird wanderings of the soul in their lyrics, making for an extra spellbinding experience when listening for the words amidst their subtle sounds.

‘Are you a creator? / Are you anything at all?’ the ethereal voice of Birsen Uçar asks in ‘Beating Heart,’ a 2016 late summer single that’s reverberated loudly in Belgian indie circles and beyond. The answer has been a loud yes. ‘Beating Heart’ is the calling card for In Dreams, the full-length debut by Uçar and husband Pieterjan (or PJ) Seaux’s musical marriage, Hydrogen Sea. After dropping and selling out their five-track EP Court the Dark two years ago, the anticipation to hear what the couple of night-ravens would cook up next was big. And justly so, as we now get the luxury of enjoying In Dreams, a synthpop work of international allure, almost entirely composed under the hush of night. Listening in the dark – or even better, live – is recommended to fully let the intoxicating effect of Uçar’s whispers and Seaux’s expertly layered electronics seep through.

Fans of experimental, gloomy electronics and gritty sounds are bound to fall in love with the Belgian quartet BRNS (pronounced ‘brains’). They started jamming in 2010, played their first gig in 2011 and released their LP Wounded in 2012. Two years later, their first full-length album, Patine, saw the light of day and took its listeners on a mesmerizing journey of multi-instrumental sounds. Complicated musical narratives make their record read like a thriller full of surprising twists, while experiencing them live feels more like becoming part of an endlessly captivating improvisation.

With six albums behind them and charmers like ‘Moodswing Baby’ and ‘Envoi’ in their repertoire, Absynthe Minded enchants effortlessly. In search of a space to belong, the protagonists of their songs are forever asking where the love is. Frontman Bert Ostyn and his soulful posse supplemented their indie rock with occasional folk, funk, and a melancholic sauce until 2013 when music-loving Belgium was sad to see them go on hiatus while Ostyn worked on solo project No South of the South Pole. This February, the band announced their return, three new band members and a fresh musical baby in the making by the name of Jungle Eyes.

Following a surprising English-language, heart-wrenching cover of Jacques Brel’s ‘Ne Me Quitte Pas’ during radio channel Stubru’s talent competition De Nieuwe Lichting, Tout Va Bien was on the road to a debut album much-sampled. With Kepler Star, Jan Wouter Van Gestel proved again that he isn’t afraid to let us peer into his musical soul. What’s to be found is a deep voice, dreamy electronics (think James Blake though less experimental so far) and tons of melancholy – just the Belgian indie lover’s cup of tea at the moment.

Jan Paternoster and Dries Van Dijck made Belgian garage rock a thing again in 2007 when they came out with Set Your Head On Fire, a massively successful debut carrying instant hits ‘I Think I Like You’ and ‘Never Alone / Always Together.’ A US tour and places in the lineup of Bonnaroo, Rock Werchter, and Pukkelpop soon followed for The Black Box Revelation (the ‘the’ has since been shed). Shredding guitars that build up to mayhem have always been a hallmark of the Antwerpenaars’ sound, alleviated in due time by melodies breathing a bluesy smokiness. The near sarcastic qualities of Paternoster’s voice are best admired during the band’s well-oiled live set, as are the fine melodic refrains of their fourth and latest album, Highway Cruiser.

In the slipstream of Oscar and the Wolf’s 2014 breakthrough, Bazart has stood up in 2016 to blow surprised Flemings out of the water with brooding electropop once again, though this time the lyrics that had entire festival tents singing along in summer were in Dutch. ‘Liever snel naar de hel dan traag naar de hemel’ (‘rather fast to hell than slow to heaven’) frontman Mathieu Terryn – already the conqueror of many a young heart – states boldly in breakout single ‘Goud,’ but Bazart’s journey has been the opposite. The five young lads from Ghent and Antwerp, including instrumental wunderkind Oliver Symons, have known a meteoric rise unprecedented for a Belgian Dutch-language band. In the run-up to their debut album Echo, only released this past September, they’ve played the biggest festivals in Belgium and have charmed the Netherlands as well. The boys remain endearingly overwhelmed by the seas of crowds showing up to their sets, rewarding one and all with absorbing performances of songs like ‘Chaos’ and ‘Koorstdroom.’

It’s been the consensus amongst connoisseurs for quite some time now that STUFF. has everything to make it big at home as well as abroad. The five-headed band has brought a fresh gust of wind to the Belgian indie scene by traipsing through genres with the utmost of ease. The title of their musical baby, Hybrid Love, says it all. Even more adventurous than their debut, the album dips into jazz, funk, soul, hip-hop and electronics – a genre-transcending chameleon of the most adventurous sort. Jazz drummer Lander Gyselinck is widely seen as a talent to watch, but if STUFF. sticks to its wildly experimental streak, its pull might prove too small for large commercial success, which is nothing to discourage those in the know from enjoying these groovy cats that are simply doing it for the love of the game.

One of Belgium’s biggest musical exports went through a rough time between their second and third album, having lost their drummer Dennis, brother in arms and real-life brother to vocalist Antoine, in a car crash in 2010. The Walloon band with the coolest name went from the more upbeat and poppy From Here To There (2003) and Plan Your Escape (2008) to the beautiful elegy that is Everest (2013) and the intimate acoustics of Hello Strange (2014). Introspective ponderings on loss and hopeful glances towards the future now alternate in complex songs like ‘Misses,’ which go straight for the jugular.