From the middle of the 19th century, Brussels underwent a gigantic metamorphosis. The Senne was covered, and wide avenues were constructed which connected the new urban districts to the city center. Beautiful buildings in the new architectural styles of the Belle Époque arose everywhere, and after WWII, many existing sites were set to be demolished in favor of urban renewal. We take a look back at the historic buildings and places that no longer exist in the capital.

The Palais des Sports in Schaerbeek

The Palais des Sports in Schaerbeek opened in 1913 and could hold up to 15,000 spectators. Located on Avenue Louis Bertrand, numerous sports competitions, cultural events and political demonstrations were organized here over the years. In the indoor velodrome, the heroic six-day races of Brussels took place every year. In 1967, this legendary sports temple was demolished to make way for the residential tower Brusilia, in 1972.

In 1846, at the Place Rogier, arose the majestic building of the Brussels North Station, designed by architect François Coppens. It was a central junction for the many city trams and the railway lines connecting Brussels to the northern part of the country. In 1952, the railway station was replaced by the new and more modern station that we know today. The old station building was demolished completely in 1955 and replaced by the Rogier Centre, which in turn was demolished in 2004 for the current Rogier Tower. 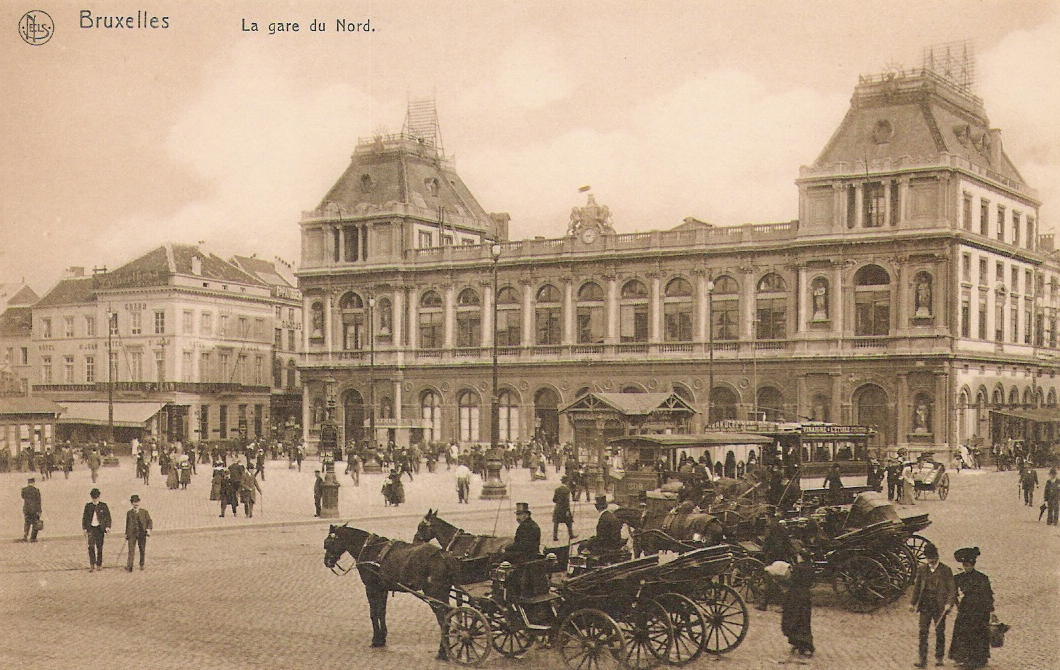 The Theatre du Cirque was erected in 1845 at the current Boulevard Emile Jacqmain. After the covering of the Senne and the construction of the Boulevard de la Senne, a monumental façade with a curved arch and four statues representing Drama, Tragedy, Dance and Comedy were built in 1874 by architect Jean-Pierre Cluysenaar. The theatre was renamed Alhambra. Over the years, many circuses, popular revues and famous jazz musicians performed here, until 1957 when the largest theatre in Brussels closed its doors. In 1977, the building was demolished under loud protest for security reasons. Evidence was found later that the four façade statues were sculpted by none other than Auguste Rodin. 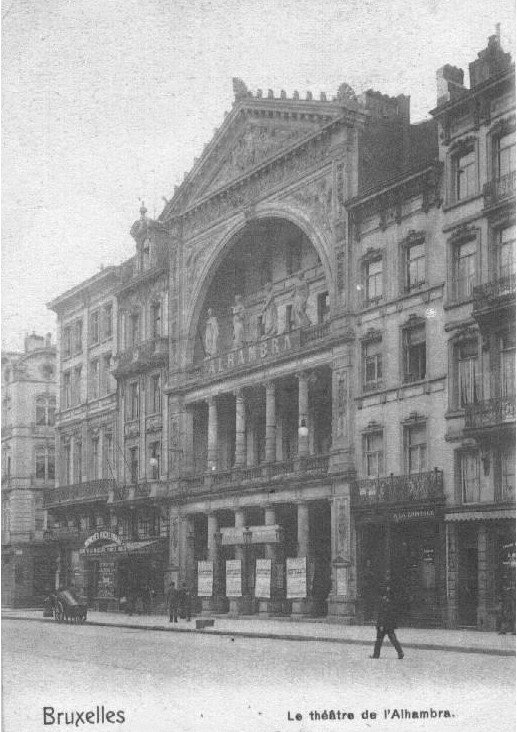 À l’Innovation de Bruxelles was a marvelous Art Nouveau department store designed by Victor Horta on the shopping street Rue Neuve. Starting from 1897, this large market, consisting of several floors, hosted numerous items including furniture, clothing and household conveniences, cosmetics and jewelry. The building burned down completely after a tragic fire in 1967. On the same location, individuals can now shop at Galeria Inno. 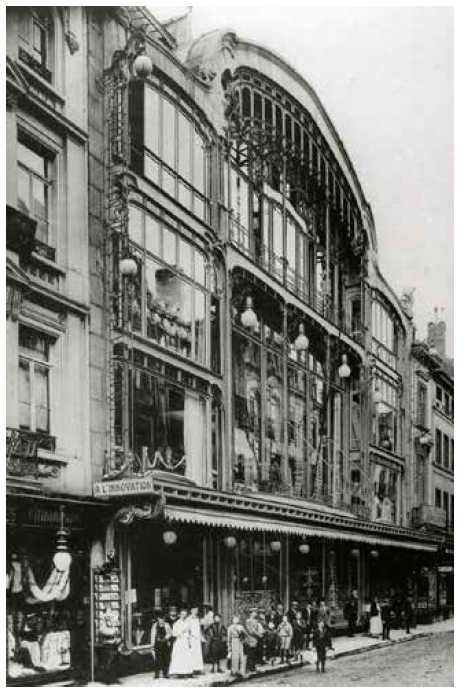 The Halles Centrales was a fresh market constructed between 1872-1874 by architects Léon Suys and Edmond Le Graive. It had an elegant design composed of glass and cast iron, and the two wings of the market were separated by the Rue Grétry and covered by a large arch. From 1893, the north wing was introduced to Le Pôle Nord, an ice skating rink for the bourgeoisie. During the summertime, it was transformed into the Palais d’Été with plenty of spectacular gala evenings. In later years, the building began to lose some of its luster and only served as a place to host greyhound races until 1953. The north wing was finally demolished in the ’50s to build Parking 58. The south wing, where a daily market was still held, followed in 1963. 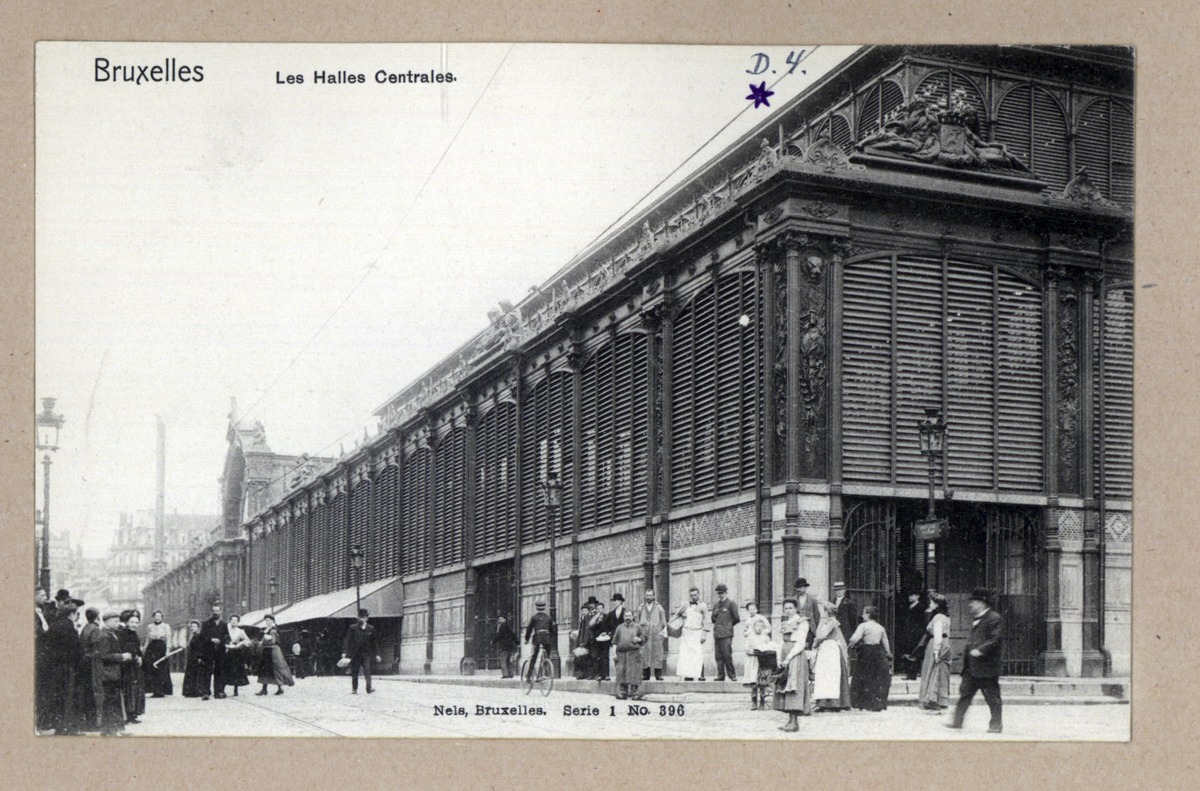 At Place de la Monnaie, there used to stand a large and stately building known as the Brussels Post Office. The old Hôtel des Postes was built in 1885 by architect Louis de Curte but was completely demolished in 1966 for the high-rise tower block of the current Centre Monnaie. 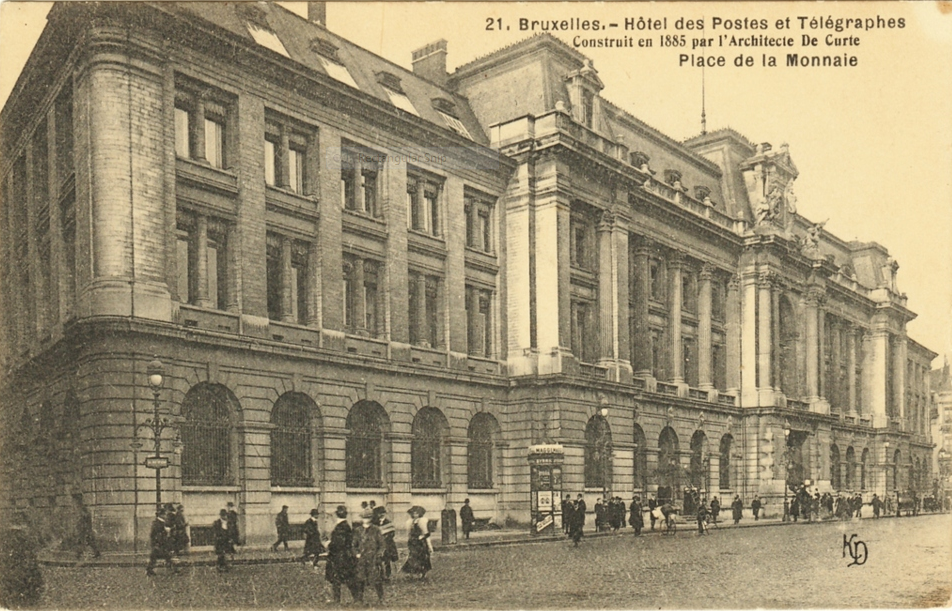 Palais Granvelle once dominated the Montagne de la Cour. The beautiful Renaissance building owed its name to the Archbishop Antoine Perrenot de Granvelle, who ordered the palace to be built around 1550 and served as his home from 1555-1564. It was later used as a government building and then as a campus for the Université Libre de Bruxelles. In 1931, the palace was demolished, however, for the railway construction of the future North-South connection. The Ravenstein Gallery, built in 1956, is now located on the ruins of the palace. 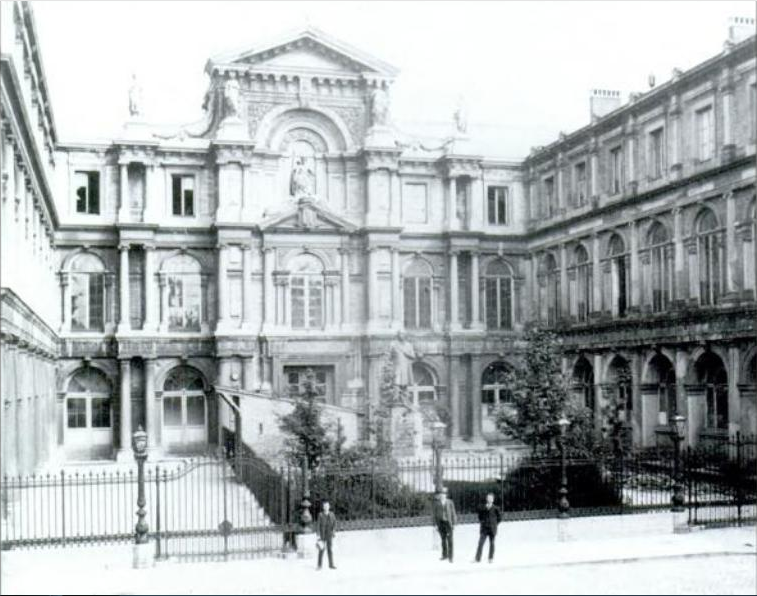 Near the Chapel Church in the Marolles, you could once encounter the Maison du Peuple – a gem of Art Nouveau architecture designed by Belgian architect Victor Horta. The frivolous building had room for offices, shops, cafés, meeting rooms and a ballroom and was inaugurated in 1899. Despite much international protest, the Maison du Peuple was demolished in 1965 to make way for a modern skyscraper. The bureaucratic Tour Blaton, named after its eponymous construction company, has brightened up the Marolles since that time. 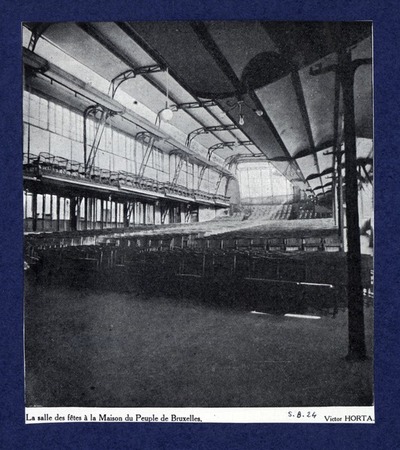 The Brussels South Station was in the neoclassical style, designed by architect Auguste Payen, and opened for service in 1869. Between the Brussels North and South Station, many city trams drove to and fro. Located in front of the station building was the Place de la Constitution, a beautiful park square that joined the central boulevards towards the city center. After WWII, it closed its doors permanently and was demolished in 1949 to make way for the North-South connection and a new railway station. 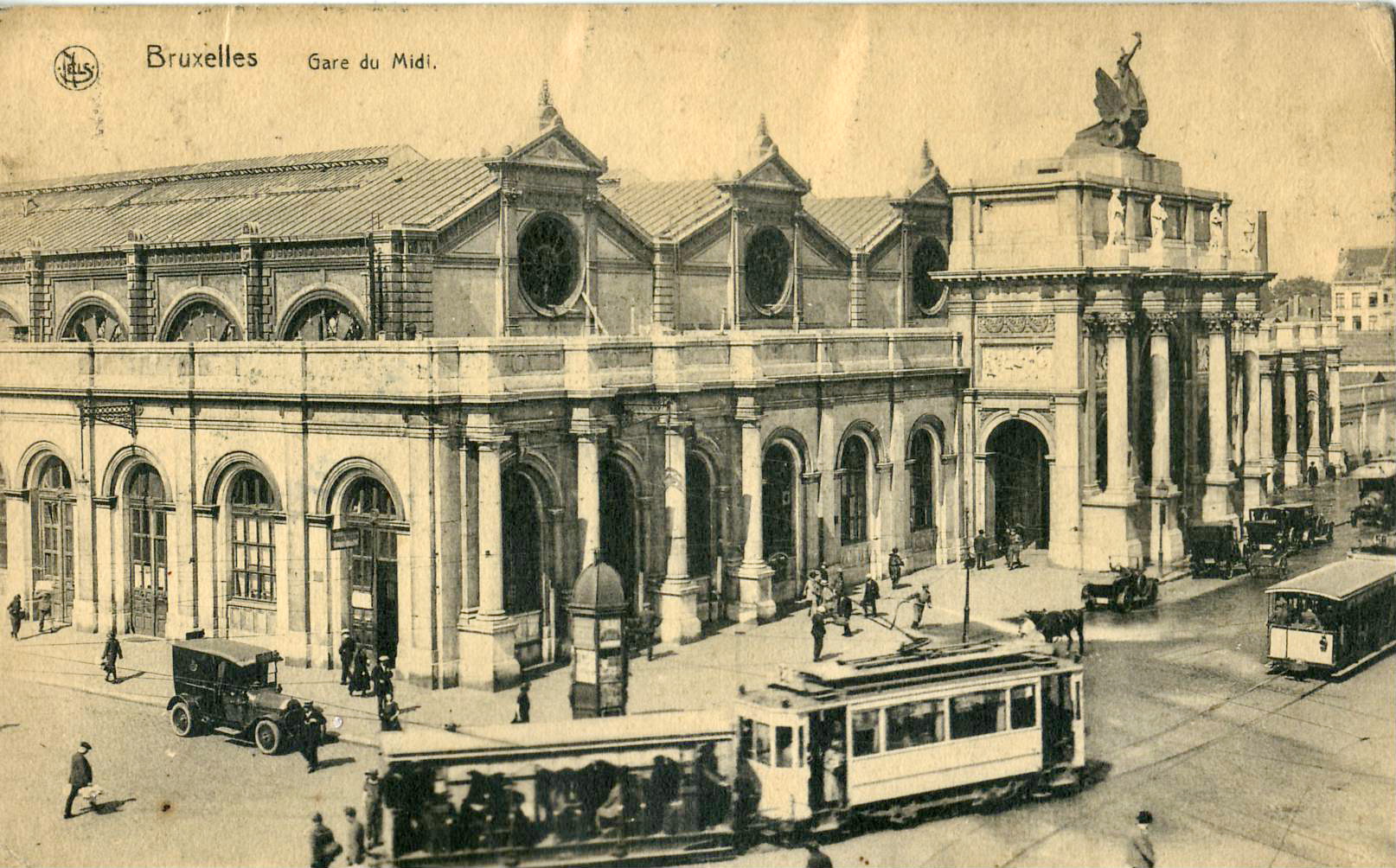 Ernest Blerot was one of the most famous Art Nouveau architects in Brussels during the Belle Époque. All around the city, you can still explore his architectural heritage. At the Étangs d’Ixelles, he built his own private house between 1901-1908. Sadly, this beautiful hôtel, situated at the corner of Rue Vilain XIIII and Avenue Général de Gaulle, was demolished in 1965 for the construction of a residential apartment building.

House of the architect Ernest Blerot (built in 1901-08, demolished in the early sixties) | © Anonymous/WikiCommons