Boule et Bill |  Courtesy of Claire Godeaux
On a beautiful sunny day, there is nothing better than an afternoon stroll and discovering local treasures, such as the stunning comic strip murals decorating the city walls of Brussels. Brussels certainly deserves recognition for being the capital of comics and home to a number of world-renowned comic artists. Launched in 1991, after the opening of the Belgian Comic Strip Center two years earlier, the Comic Strip Route not only embellishes the city, but also gives individuals a preview of its most beloved characters.
The World of Hergé arrives at Brussels-Luxembourg station  Courtesy of Claire Godeaux

The Adventures of Tintin

Created in 1929 by Georges Remi, also known by his pen name Hergé, the adventurous reporter Tintin and his famed quiff hairstyle is without any doubt Belgium’s most emblematic figure. Traveling around the world with his loyal canine companion Snowy, Tintin solves mysteries and stands up against injustice. Over the course of Tintin’s adventures, the reader is introduced to charismatic characters such as Captain Haddock, Thomson and Thompson, Professor Calculus, and the opera singer Castafiore. This particular mural represents a drawing from the album The Calculus Affair, published in 1956. 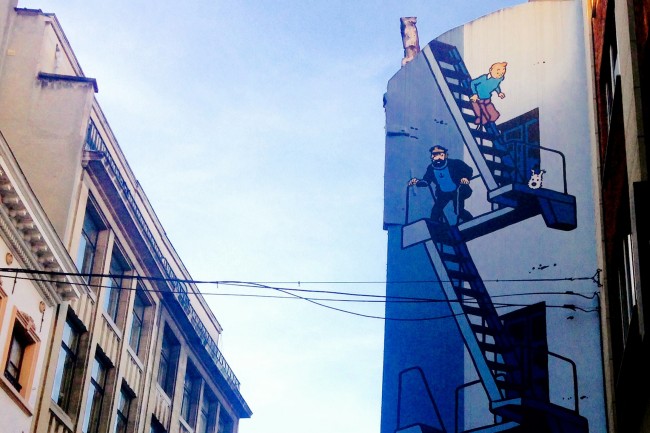 The Adventures of Tintin | Courtesy of Claire Godeaux

Originally written by René Goscinny and illustrated by Albert Uderzo, the French comic book Asterix, published in 1959, tells the exploits of a small Gaulish village in possession of a magic potion brewed by the druid Getafix. This magic concoction, once taken, allows the Gauls to attain superhuman strength and become resistant to Roman invasion. The comic’s main protagonists are the smart warrior Asterix and his friend Obelix, who as a child fell into the cauldron holding the magic potion, gaining permanently a supernatural strength. 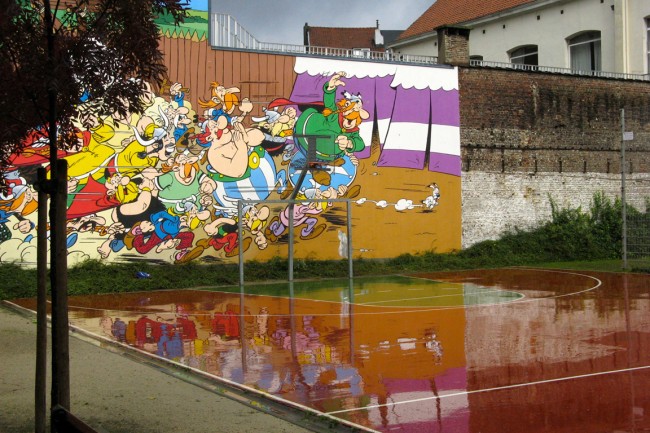 In 1946, the Belgian cartoonist Maurice de Bevere, known as Morris, brought a lonesome cowboy to life through his cartoon Lucky Luke. This satire based on the mythic Old West is composed of several characters such as the Dalton brothers, identical looking outlaws, Jolly Jumper, Lucky Luke’s sarcastic white horse, and Rantanplan, a simple-minded prison guard dog. 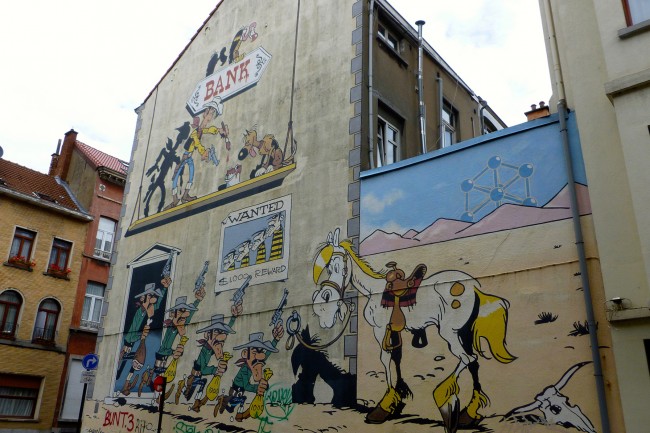 Hand Me The Sky

The mural painting Passe-moi l’ciel (hand me the sky), is intended to be a parody of St. Peter’s paradise, based on a series of comic strips published in 1988 within Spirou magazine. The creators behind this mural are Belgian comic artists Jean-Richard Geurts, (Janry) and Stéphane De Becker (Stuf). 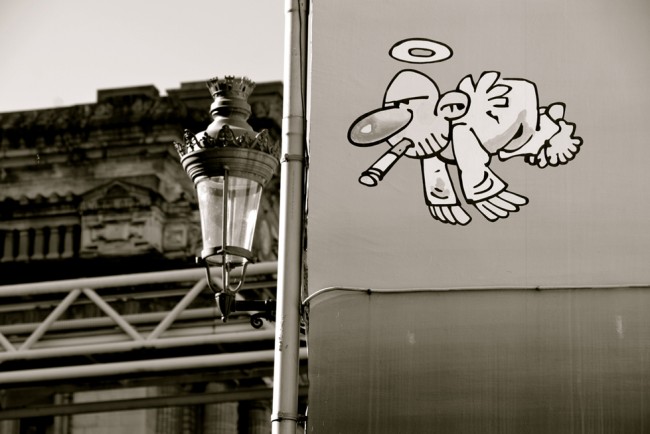 Beginning in 1938 and continuing today, the story of Spirou and Fantasio tells the tale of two adventurous journalists helped by the squirrel Spip and an eccentric scientist named Count of Champignac. This particular comic took concrete shape in a Franco-Belgian partnership. In the hands of a succession of writers and illustrators, the main character Spirou, initially an elevator operator invented by the French cartoonist Rob-Vel, developed into a more modern figure with a distinct appetite for fantastic investigations. André Franquin, an essential personality within the Belgian comic world, developed the strip considerably when he created Marsupilami, a rare monkey-like creature with a tremendously long tail. 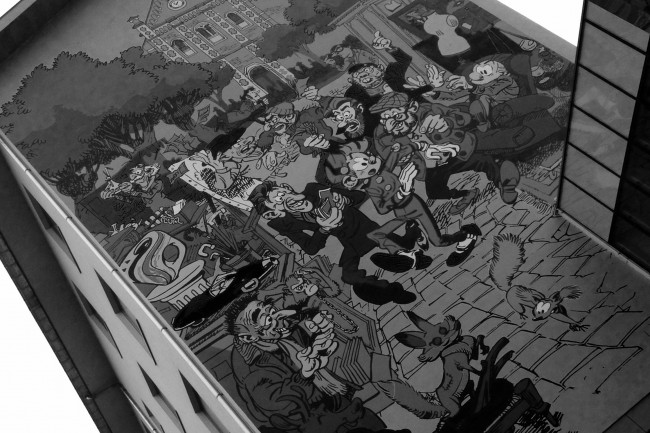 In 1930, Quick and Flupke, founded by Hergé, was published for the first time in Le Petit Vingtième, a supplement for children to the conservative and controversial Belgian newspaper Le Vingtième Siècle. The comic series depicts the daily life of two misbehaving boys from Brussels. In a charmingly villainous manner, these characters like to generate small conflicts in their neighborhood and with the local police. 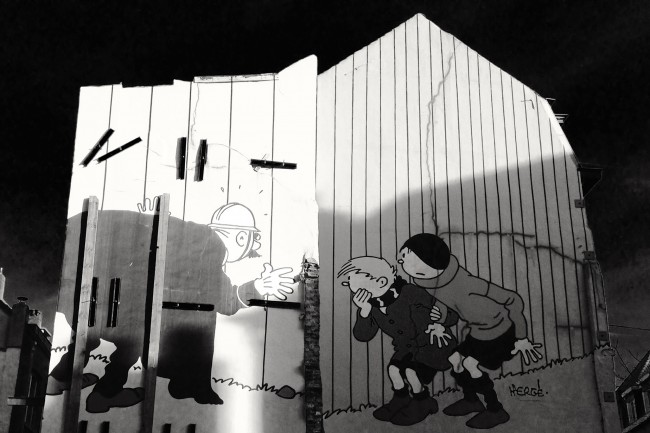 Influenced by German and American comic strips, Jean Roba, a Belgian comic artist, came up with the idea to tell the homely and comical story of Boule et Bill (Billy and Buddy): a tale about a small boy, his cocker spaniel and the turtle Caroline, living in a pleasant traditional family. 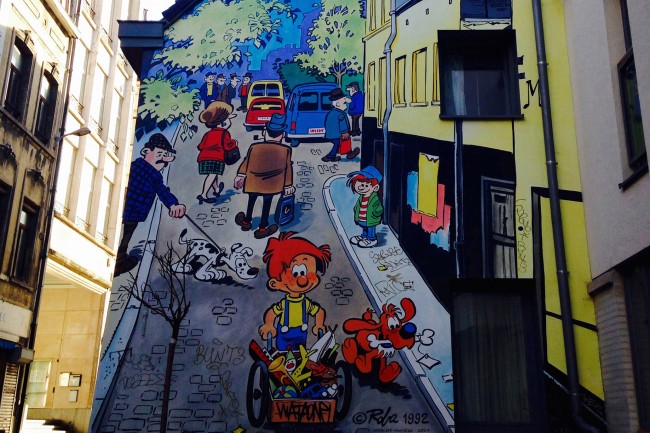 At the very beginning, Le Chat (the cat) was published daily from 1983 in the Belgian newspaper Le Soir. Interestingly, the author Philippe Geluck, now arguably one of the most successful and popular contemporary Belgian cartoonists, first pursued a career in acting before illustrating cartoons. The humoristic figure of a thoughtful, philosophical and anthropomorphic cat delightfully reflects surrealism and absurdity; a form of art which Belgians excel in. The 140 meters long comic strip mural features 23 drawings of The Cat, some of which relate to the European district of Brussels. 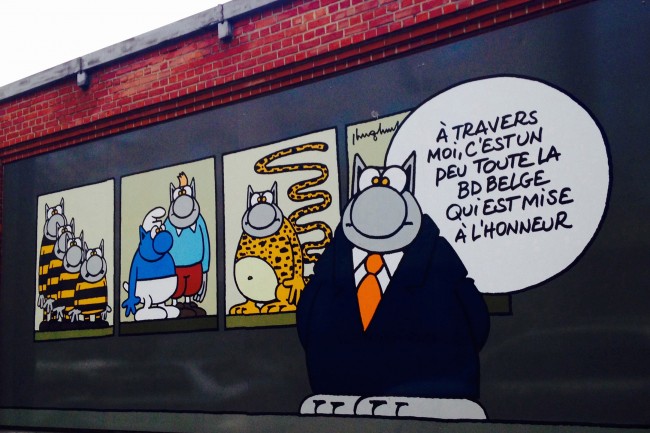 This very realistic painting mural represents Armando Catalano, The Scorpion. In 1996, the Belgian writer Stephen Desberg and the Italian illustrator Enrico Marini decided to present a historical-fiction story that was set in Rome during the second half of the 18th century. The storyline focused on the conflict between the Cardinal Trebaldi, the face of the religious authority, and the Scorpion, a holy relics dealer and son of a heretic. 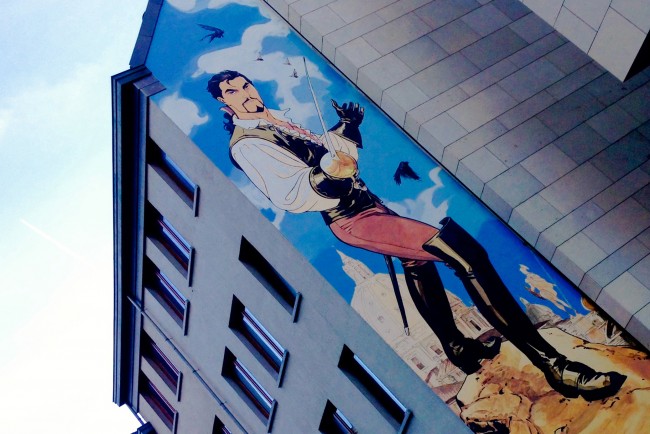 The Scorpion | Courtesy of Claire Godeaux

Corto Maltese, a captain adventurer in the early 20th century, was created in 1967 by the Italian author Hugo Pratt. This outstanding mural composed of four drawings, each 80 meters long, and is dedicated to the following albums: Corto Maltese in Africa, Corto Maltese in Siberia, The Gilded House of Samarkand and The Celts. 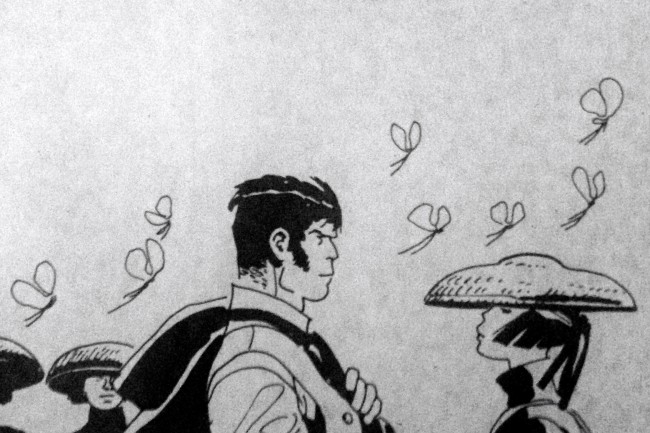