10 Contemporary Belgian Writers You Should Know 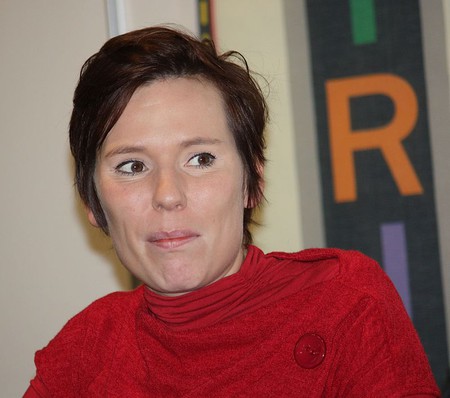 From a Holy Trinity of taboo-busting Flemish iconoclasts to authors who dip into the surrealist tradition, Belgium has a lot going for it on the literary side of things. We selected the top of the class, with these ten, original Belgian voices.

An identifier you often hear floating around Dimitri Verhulst is that he’s the spiritual offspring of Flemish literary legend Louis Paul Boon. However, the comparison doesn’t have so much to do with style as with their compassionate portrayal of the lower classes of Aalst. It’s in their mutual hometown that both the old and the new wizard of Dutch language have set their most revered works – De Kapellekensbaan and The Misfortunates respectively. The latter, a cutting and semi-biographical coming-of age story among a brotherhood of lovable drunkards, has made Verhulst a hallmark name in contemporary Flemish literature.

Everyday misfits who wander around and experience the occasional surrealist intermezzo, like a long and earnest conversation with a sperm whale. Or heroes who are a little unlikely themselves, such as a schnauzer dog wrestling with its identity. The characters Verbeke conjures up in books and collections of short stories – a genre she’ll defend to the death – such as Sleep! (2003) and Thirty Days (2015) are completely lovable in their utter strangeness.

As much of an accomplished playwright as he is a novelist, Tom Lanoye is one third of the ‘Angry Young Belgians’ who breathed new life into the rather tepid Flemish literature in the eighties. Be it prose, poetry or words meant for the stage, the ‘butcher’s son with glasses’ (part of his identity and title of his prose debut) has been at his best when digging deep. 2009’s Speechless, an unexpected spiritual sequel to the lauded 1991 Cardboard Boxes, is Lanoye’s intensely intimate answer to the death of his mother and has already become a classic of Flemish literature.

Amélie Nothomb, the leading lady of the Walloon literary scene for a while now, defies the image of the secluded writer hiding behind a laptop. Her public persona – instantly discernible by a big black top that she takes off when she doesn’t want to be recognized – also makes its way into her fiction. Self-referential peaks came with Pétronille in 2014 but are also part of what made her forays into Japanese culture such as Fear and Trembling (1999) and Tokyo Fiancée (2007) so riveting. Nothomb has been delivering books like clockwork once a year ever since her debut Hygiène de l’Assassin (Hygiene and the Assassin) was published in 1992 to spectacularly successful acclaim at home as well as abroad.

It took a while before intellectual jack-of-all-trades Stefan Hertmans gained national recognition. While there lies a magnificent oeuvre of novels, essays, theater and poetry in his wake, it wasn’t until Terug naar Merelbeke (Back to Merelbeke) came out in 1994 that the first heads started to turn. Even then, it took until 2013 – when his magnum opus War and Turpentine was published – for Hertmans to become a nationally known name. Now the novel weaving the story of his grandfather’s WWI experience together with flourishing fiction is considered one of the greatest Dutch language masterpieces in the last quarter century.

The kind of writer who voices what you’re thinking – yet with a pointedness and eloquence you can only dream of – is the kind of writer whose books you get addicted too. Saskia De Coster achieves this more than ever in her latest works Wij en Ik (Us and Me, 2013), Wat Alleen Wij Horen (What Only We Hear, 2015) and her frequent newspaper columns. Up for a challenge, the writer read a page a day from Us and Me every day for almost 400 days to her website audience.

When starting a novel by Peter Terrin, you never quite know what you’re in for. A minimalist style and gripping prose yes, but the worlds in which you will land may vary wildly. From the East Flemish countryside, where a lauded writer leads an inconspicuous life in Post Mortem (2012), to the glitzy Grand Prix Formula 1 racing track of 1968 in Monte Carlo (2014), it’s no use trying to prepare for the universes Terrin will fling you into. At times there’s even a Kafkaesque vagueness to them, such as in 2009’s The Guard.

An acquired taste to say the least, Herman Brusselmans’ writing can be called vulgar, self-absorbed, disruptively honest and extremely thoughtful all at the same time. The aged rocker of Flemish literature is a veritable fountain of provocative statements, magazine columns and media appearances, yet a surprisingly productive one at that. 70 titles to his name and a loyal fan base that describe him online as ‘the beautiful young supreme God of Flemish literature’ will go a long way.

Part of the new crop of taboo-crushing talents that came up in the eighties – which also included Herman Brusselmans and Tom Lanoye – is Kristien Hemmerechts. Hemmerechts came along with her lauded debut novel Een Zuil van Zout (A Pillar of Salt, 1987) when Flanders desperately needed her feminist voice. She was thanked with the triennial State Prize of the Flemish community, a loyal readership and the female role in the new generation’s Holy Trinity of ‘Angry Young Belgians.’ After a dry spell, Hemmerechts, also a teacher of English literature, has come out swinging again in 2015, with a gender-flipping reworking of J.M. Coetzee’s Disgrace, Alles Verandert (Everything Changes).

It’s no surprise that a man with two parents operating a puppet theater for a living would grow up to be one of Wallonia’s most imaginative authors. Nous Sommes Tous des Playmobiles (We Are All Playmobiles, 2009) is a classic example of Ancion’s writing style: humorous and in keeping with the Belgian surrealist tradition, the plastic characters in its short stories all have the best of intentions but are challenged by antagonists of lesser conscience.