10 Artworks By Van Eyck You Need To Know 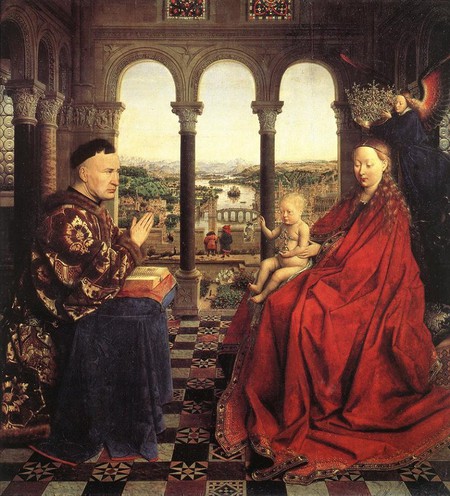 Jan van Eyck was one of the first great master painters of the Northern Renaissance. There are little more than 20 works – portraits and devotional paintings – attributed to him, though he worked in Bruges as a court painter for Philip the Good of Burgundy. Painting in the new medium of oils enabled van Eyck to achieve a hitherto unmatched depth of detail and realism. His works were a major influence on the Netherlandish painters that followed like Rogier van der Weyden and Petrus Christus.

Painted in 1434, The Arnolfini Portrait is amongst the most recognized images in western art. The full-length double portrait has been in the National Gallery in London since 1842. A masterpiece of naturalism in oils, it shows Giovanni di Nicolao Arnolfini and his second wife. The Arnolfinis were leading merchants in Bruges, but they were originally from Lucca in Italy. The couple’s wealth is clear from the immaculate fur-trimmed gown Giovanni wears. Much scholarly debate has centered on whether it is a marriage oath recorded, with the couple’s hands joined in the center and Giovanni’s other hand raised, or whether the two are already married. Their gender roles are clear – she next to the bed, eyes fixed on her husband, and he closest to the open window and the world of commerce and affairs. The mirror on the wall may be a symbol of the eye of God. 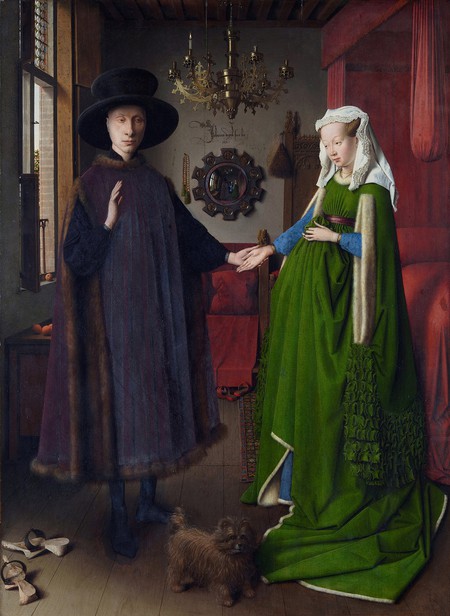 Hubert van Eyck, older brother of Jan, took the commission from Ghent merchant Jodocus Vijdt but died in 1426, leaving his brother to complete the altarpiece. Finished by 1432, it is a polyptych, made up of painted panels on the inside and out. Famously, it has been plundered many times during Europe’s wars, and one panel remains lost after a theft in 1934. The panels are a fine example of how van Eyck used light and shade to represent depth. When closed, viewers see prophets and sibyls announcing the coming of Christ, the Virgin and the Archangel, and saints and Vijdt and his wife set in extraordinarily realistic tracery niches. When opened, the panels burst with color and hundreds of figures are seen beneath six-foot-high images of John the Baptist, Mary, and a figure called ‘The Almighty’, flanked by angels and Adam and Eve covering their nakedness. 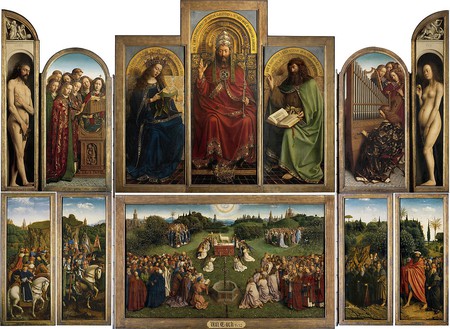 There are two near-identical versions of this painting, one in Philadelphia and one in Turin. For years, their attribution was uncertain until it was found that the wooden panel on which the Philadelphia painting was executed came from the same tree as two portraits by van Eyck. They are believed by scholars to be relatively early works by van Eyck, perhaps from the late 1420s or early 1430s. We see St Francis during his 40 days in the wilderness as he receives the stigmata, accompanied by a seraph and his confessor, Brother Leo. But more striking is the naturalism within the painting, the extraordinary verisimilitude and details of the rock formations and beyond them, the Flemish city in the far distance. Look closely and you can see people and animals beneath the city walls that are no more than tiny black specks on the canvas. 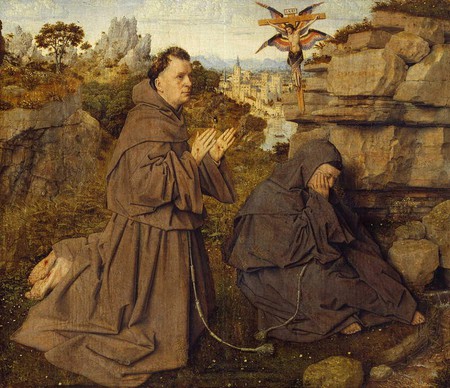 Portrait of a Man

The National Gallery in London has held this portrait since 1851, having been brought to Britain in the 17th century. It has long been considered a self-portrait of van Eyck made in 1433, almost a business card to show to potential patrons who could see and admire the veracity with which he could render his own physiognomy in paint. He stares out of the portrait wearing a red chaperon commonly worn by men in Burgundy at this time and often depicted in Early Netherlandish painting. Its ample folds are traced with tremendous care and skill by van Eyck. On the top of the frame is the motto ‘Als Ich Can’, meaning ‘As I Can’ and punning on his name – it features on several other of his works. 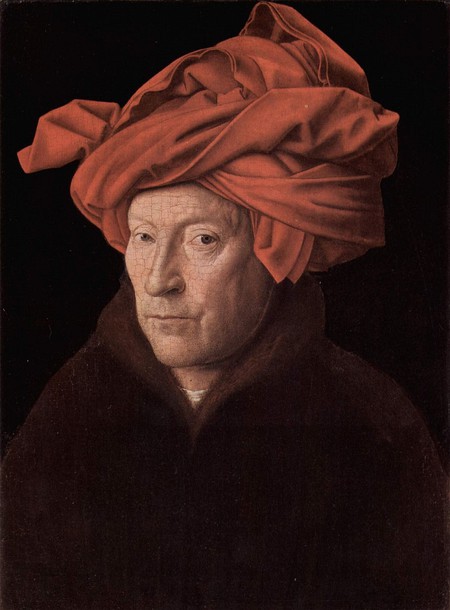 The identity of the sitter is mysterious. His face seems melancholic, perhaps he was a musician at the Burgundian court or a legal advisor. Painted in 1432, Leal Souvenir is notable as an early example of the secular portrait and for the parapet that dominates its lower portion. On the rock parapet are three lines of inscriptions. The middle reads ‘Leal Souvenir’, French for loyal memory, suggesting the portrait is posthumous. Below is van Eyck’s signature, and above are strange Greek letters that suggest the name Timotheus. This could be the name of the sitter or a classical reference. The chipped, fissured and cracked rock parapet is a symbol of human transience. The portrait is a clear influence on the later works of Petrus Christus. It’s been held by the National Gallery since 1857. 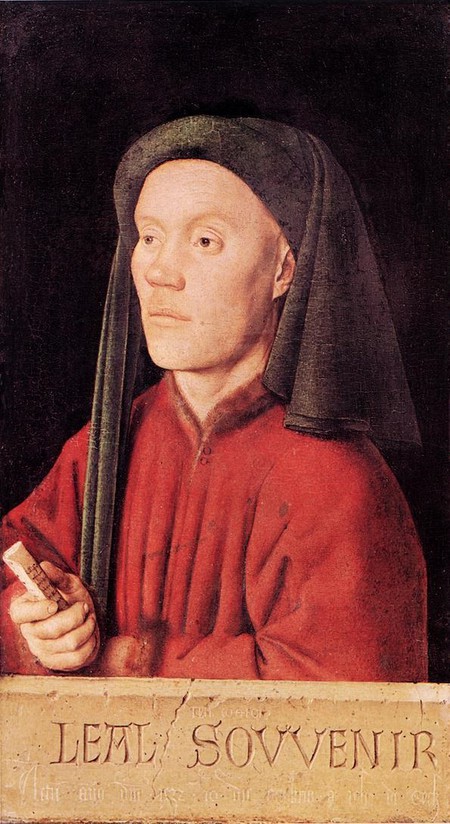 Nicolas Rolin was the Chancellor of the Duchy of Burgundy. It is he who sits on the left, his hands in prayer and facing the Virgin, who presents the infant Jesus to him whilst an angel hovers above her. The room in which they sit is lavishly tiled, the columns behind Rolin capped with carvings depicting the Seven Deadly Sins. And behind the figures is a loggia through which is a small garden, a figure in a red chaperon, perhaps another self-portrait of van Eyck, and next to him a peacock, a symbol of pride. Beyond this is another extraordinary landscape with a river and town. Towers, bridges, and mountains can be seen. It may be Autun, Rolin’s hometown. Viewers, thus, have a mixture of worldly sin and a reminder of the path to salvation before them. The painting is held by the Louvre.

One of the last of van Eyck’s works, his portrait of his wife of 1439 was once hung in the Guild of St Luke Chapel in Bruges, dedicated to painters. It may have been part of a diptych, joined with the Portrait of a Man if that is, indeed, a self-portrait. After extensive restoration in London, the portrait now hangs in the Groeningemuseum in Bruges. As with all of van Eyck’s portraits, the head is enlarged compared with the body, and the focus is concentrated on the facial features and head. Margaret peers out at the viewer, her red gown trimmed with fur, hair arranged in two horns beneath her wimple in Burgundian fashion. She looks distinguished, but without the lavish wealth of the Arnolfinis. It is a mark of the low opinion of Northern Renaissance art in later centuries that this was once said to be for sale at a Flemish fish market. 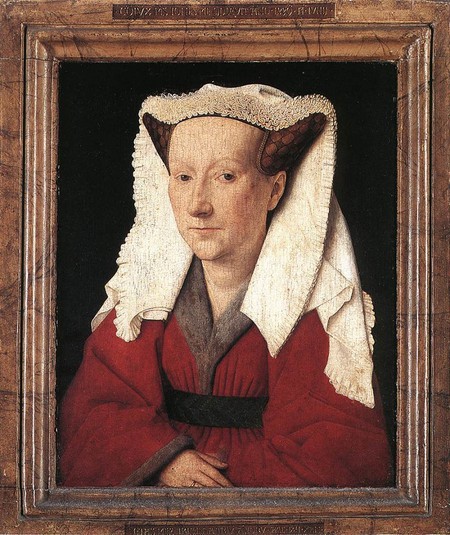 Considered by some as van Eyck’s finest work, the Virgin with Child took two years to complete between 1434 and 1436. It was intended to serve as an epitaph for Canon Joris van der Paele, who would, in fact, die in 1443 – two years after van Eyck. The Virgin sits on a throne in the center with the infant Christ; on one side is St Donation, patron of Bruges, and on the other are St George in armor and a kneeling van der Paele in clerical garb. The saints present him to the Virgin, hoping for her intercession on his death to aid his path to heaven. At their feet is an ornate Oriental carpet, behind them carefully delineated arches and windows, and carvings on the throne that show Biblical scenes. 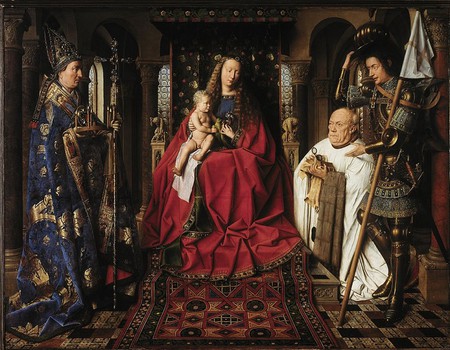 Another of van Eyck’s great portraits, but this time the frame is just as important. Jan de Leeuw was likely an acquaintance of van Eyck’s. He was a leading goldsmith in Bruges and van Eyck shows him wearing a black chaperon and robe, his eyes looking out at the viewer while his hands holds a gold ring, a symbol of his profession. On the frame that surrounds the portrait is an inscription that runs along all four sides and is painted over to appear like bronze. The wording, in Flemish, contains chronograms and acts like a speed bubble, telling the viewer that ‘I, Jan de Leeuw, have been painted by Jan van Eyck.’ It chimes with the way he looks straight at the viewer and acts as a voice for long-dead Jan de Leeuw, almost. 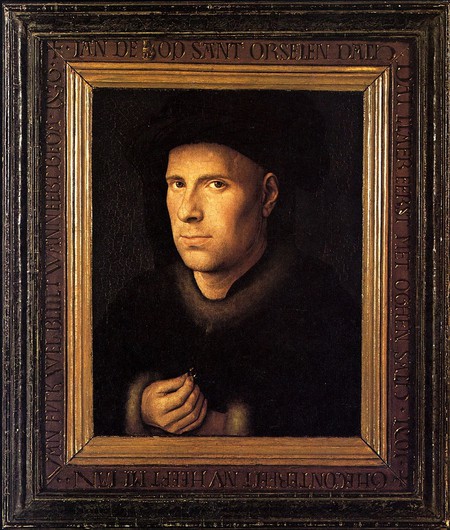 Once part of the collection of Charles I of England and later looted by the Russians in the Second World War, the Dresden Triptych has been much prized over the years despite its small size – the largest of the three panels is only around 33 centimeters x 27 centimeters. Now safely held in the Gemäldgalerie Alte Meister in Dresden, the triptych bears van Eyck’s motto ‘Als Ich Can’ and was likely intended as a mobile altarpiece for a traveling cleric. On the outer panels are the wonderfully realistically rendered figures of Mary and Gabriel as if stone sculptures. And on the main inner panels, viewers see St Catherine of Alexandria on one side, the Archangel Michael and the nameless donor on the other, while in the center is the familiar image of Mary and the infant Christ. 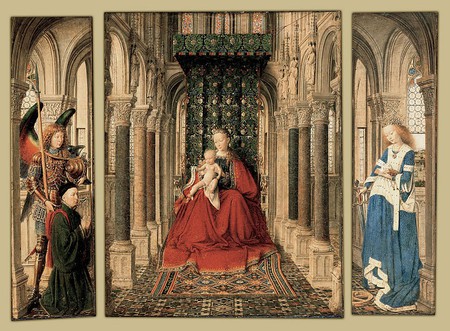 (c) Jan van Eyck via Wikimedia Commons
Give us feedback