10 Artworks By Rubens You Should Know 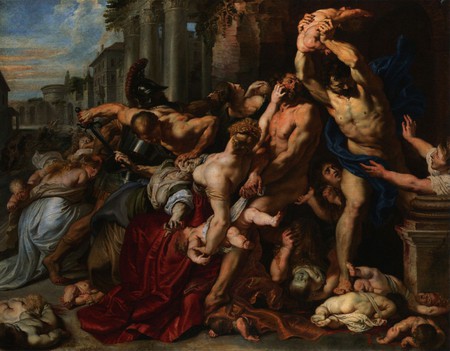 Widely considered one of the most important artists of the Baroque era, Flemish painter Peter Paul Rubens produced a prolific and influential body of work before his death in 1640. Although best known for his mythological paintings of voluptuous nude females (from which the term “Rubenesque” arose), the artist also created works both religious and political in nature. We explore some of Rubens’ most important works, from The Horrors of War to The Judgment of Paris.

The Massacre of the Innocents

The Massacre of the Innocents — which depicts the biblical tale of Roman soldiers executing male newborns in Bethlehem on the orders of King Herod — was painted in the early 17th century after Rubens returned from an eight-year sojourn in Italy spent observing the works of artists like Italian Baroque master Caravaggio. The painting became the most expensive Old Master painting ever sold when Canadian businessman and art collector Kenneth Thomson purchased it for £49.5 million at a Sotheby’s auction in 2002, before it was donated to the Art Gallery of Ontario in 2008 where it still hangs today.

The Horrors of War

Commissioned by Italian duke Ferdinando II de’ Medici, The Horrors of War was painted between 1637 and 1638 and today hangs in the Palazzo Pitti’s Palatine Gallery in Florence. Though the painting portrays Mars, the Roman god of war, marching from the Temple of Janus goaded by Alecto, the fury of war, and restrained by Venus — depicted in typically voluptuous Rubenesque fashion — it is thought that Rubens employed the allegory of Roman mythology as a political commentary on the Thirty Years’ War, which at that point had ravaged Europe for two decades. 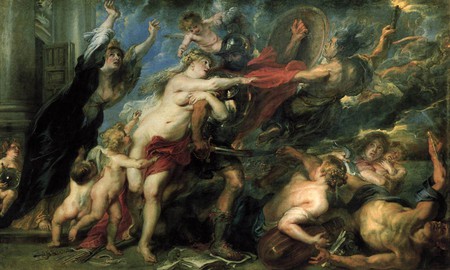 The Judgement of Paris

Another of Rubens’ mythological works, The Judgement of Paris, depicts the mythic Roman tale of the same name in which Paris was forced to judge the most beautiful of three goddesses — Venus, Minerva and Juno — in events that ignited the Trojan War. It is said that Rubens’ second wife, Hélène Fourment — 37 years his junior and the niece of his first wife, Isabella Brandt, who died four years before their marriage — was the buxom, beautiful model for the figure of Venus. A later version of The Judgement of Paris, painted towards the end of the 1630s, hangs in Madrid’s Museo del Prado. 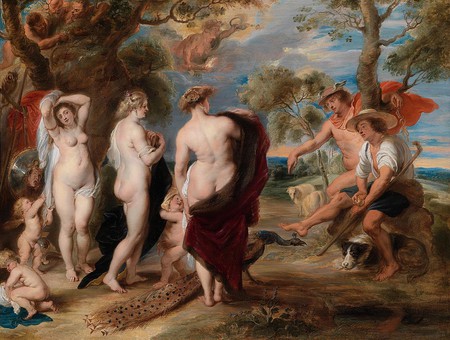 Art fans visiting London’s Banqueting House need only look upwards to be treated to one of Rubens’ most unique works — the only surviving in situ ceiling painting created by the Flemish master left today. Referred to as Rubens’ Ceiling, the work was commissioned by King Charles I and created in the artist’s Antwerp studio before being shipped to London and installed in the building’s hall in 1636. Comprised of three canvasses — The Union of the Crowns, The Apotheosis of James I and The Peaceful Reign of James I — the ceiling commemorates Charles’ father, King James I, who died in 1625. 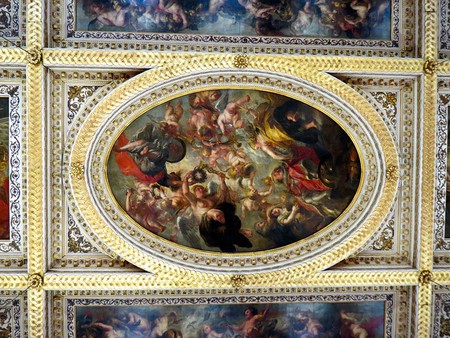 The Descent from the Cross

Located in Antwerp’s Cathedral of Our Lady, The Descent from the Cross is a triptych executed in the early 17th century depicting Christ’s lifeless body being taken down from the cross by a group of people, among them the Virgin Mary, John the Apostle cloaked in red and Mary Magdalene, described by the cathedral as “a paragon of Baroque art.” The Cathedral of Our Lady, probably one of the best locations to view Rubens’ religious art, is also home to three other works by the artist: The Raising of the Cross and The Resurrection of Christ, both triptychs, and the altarpiece The Assumption of the Virgin. 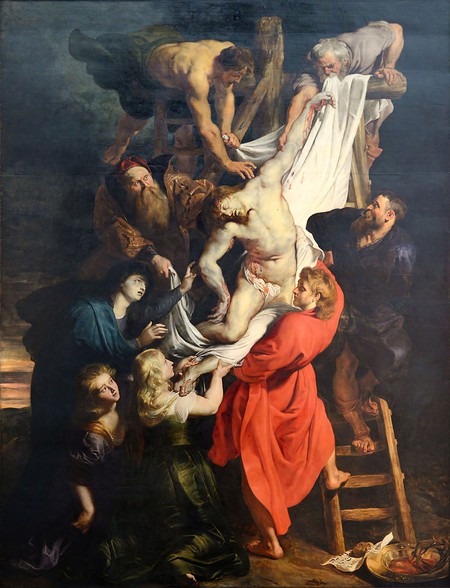 Peter Paul Rubens, The Descent from the Cross, Cathedral of Our Lady, c. 1611-1614 | © Alvesgaspar/WikiCommons

The Disembarkation at Marseilles

One of 24 paintings that make up the so-called Marie de’ Medici Cycle — commissioned by the Italian-born French queen, widow of King Henry IV of France, to depict and celebrate seminal moments in her life — The Disembarkation at Marseilles depicts Marie departing her ship at the French port escorted by Poseidon, Triton and a trio of voluptuous nereids. Rumor has it that the commission, thanks to Marie’s stubborn character, was fraught with tension, and interestingly Belgian arts writer Roger Avermaete once suggested the inclusion of curvaceous mythical nereids may have been a knowing attempt to draw attention away from the queen — perhaps Rubens’ reaction to the difficult commission. Today, The Disembarkation at Marseilles hangs alongside the fellow 23 paintings in the cycle in the Louvre in Paris. 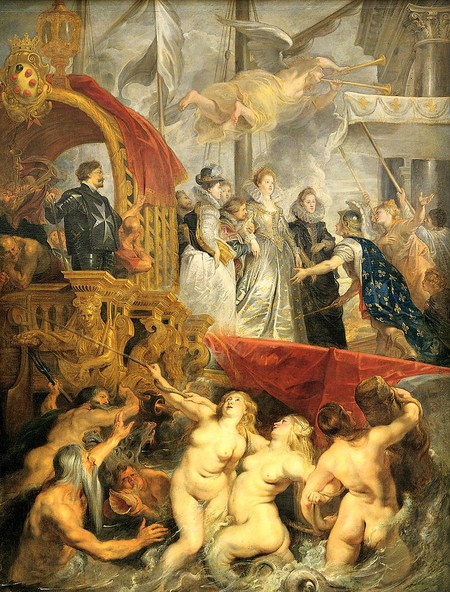 The Hippopotamus and Crocodile Hunt

Alongside his many religious and royal commissions, Rubens was also hired by a number of European aristocrats to create dramatic, large-scale hunting scenes noted today for their energy and close attention to detail, especially in their animal subjects. The Hippopotamus and Crocodile Hunt — commissioned by Maximilian I, Elector of Bavaria to adorn his summer residence, the Schleissheim Palace — is just one of these hunting pieces and today resides at Munich’s Alte Pinokothek. Other notable Rubens hunting scenes include The Wolf and Fox Hunt, housed at the Met Museum in New York City. 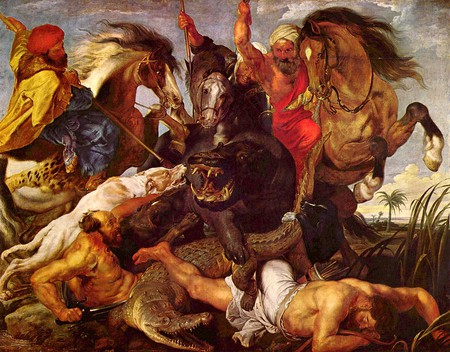 Bought by London’s National Gallery in 1980 for more than £2.5 million, Samson and Delilah — which portrays the eponymous biblical characters as the temptress betrays the hero and cuts off his hair, the source of his mighty strength — is probably Rubens’ most controversial artwork. Ever since its purchase, debates have raged as to the painting’s authenticity — there is even a whole website dedicated to the controversy — with American art historian Richard Fremantle lambasting the work as too ‘vulgar’ and ‘crude’ for an artist of Rubens caliber, while believers including English art critic Brian Sewell have claimed its originality. The National Gallery has, however, maintained its stance throughout the years that Samson and Delilah is indeed authentic, apparently with the backing of several Rubens experts. 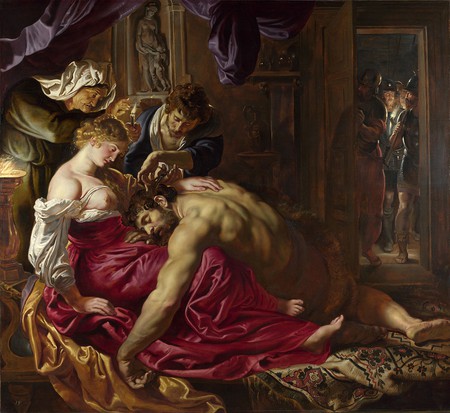 The Garden of Love

Painted shortly after Rubens marriage to his second wife Hélène Fourment, The Garden of Love is thought to be a celebration of their union — indeed, as with The Judgement of Paris, it is believed she was the inspiration behind the painting’s female subjects. The influence of The Garden of Love — today housed at the Museo del Prado in Madrid — has been noted by British art critic Waldemar Januszczak who sees its legacy in later works like Jean-Antoine Watteau’s fête galante paintings and the works of Watteau’s fellow Rococo artists François Boucher and Jean-Honoré Fragonard. 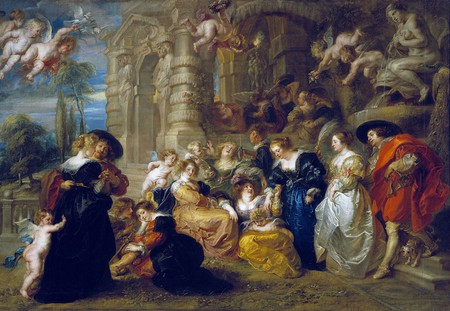 A View of Het Steen Early in the Morning 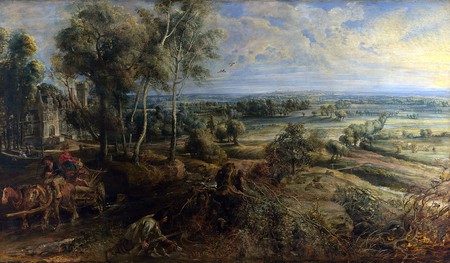