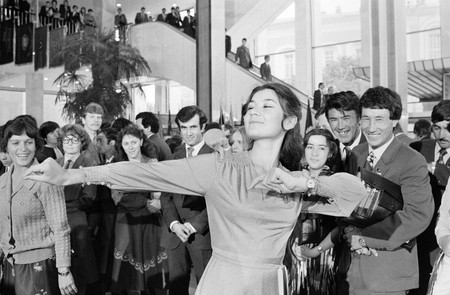 In winning the 2015 Nobel Prize for Literature, Belarusian writer Svetlana Alexievich became the first non-fiction writer to be given the prize. We examine her latest publication Second-Hand Time and what distinguishes her work as literary journalism. 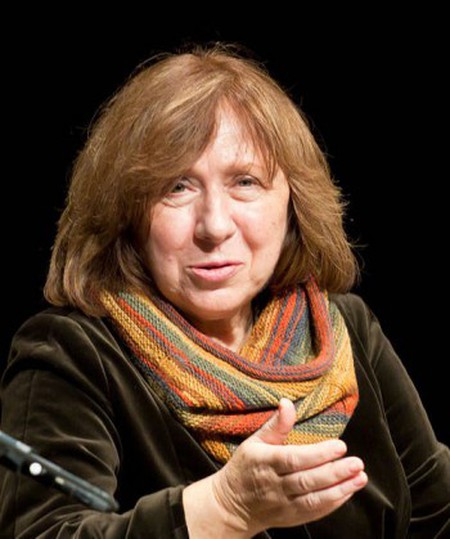 Half a year. That’s about how long it took for the euphoria accompanying the Soviet Union’s collapse to evaporate in the West. The Berlin Wall fell on November 9, 1989 and the Ceaușescu dictatorship in Romania was toppled on December 25th, only for Slobodan Milošević to give what came to be known as the Gazimestan speech (foreshadowing the coming horror of the Yugoslav Wars) in June 1990, a month before Saddam Hussein’s Iraq invaded Kuwait. As Svetlana Alexievich makes clear, however, general elation in the East lasted for a few years – from Gorbachev’s 1985 reform promises until Yeltsin marched on the Russian parliament eight years later. It was a brief moment of respite, when faith in an unshakable USSR switched to faith in change, before the whole system made way for the chain of mafia states now stretching from Turkmenistan to Belarus.

While the author is the first journalist to win the Nobel Prize in Literature, it would be wrong to describe Second-hand Time solely as extended reporting. Much like Olivia Laing – whose books created a new genre of nonfiction mixing memoir, criticism, and biography – Alexievich is a unique writer. In a dedicated effort to track and characterize the endangered ‘Homo sovieticus,’ as she calls the Marxist-Leninist ‘new man,’ she’s compiled a considerable number of stories, all affected one way or another by the fall of the Soviet Union. This ‘polyphonic style of writing’ (as Philip Gourevitch described it in the New Yorker) allows for an understanding of history unlike any other, one focused on society as a whole, and not just its leaders. The result is nothing less than engrossing, an ode to a people cheated, and cheated again, by their neighbors as much as by their rulers.

In between tales of sorrow and vain defiance, positive points make for a rare and understated show. The heroic victory over Germany during WWII, often invoked to defend Stalin (“we couldn’t have done it without him”), is deflated with accounts of the atrocities committed by the Red Army – whose own anti-Semitism had nothing to envy from the Nazis, except perhaps organization – as well as the injustices reserved for returning Soviet soldiers. The flight of the first man in space, advanced as evidence of the USSR’s golden age, is countered by the cruel lack of basic necessities suffered at one point or another by nearly all interviewees (‘we survived on potatoes’ must be the book’s single most recurring phrase). As for the liberating reforms enacted by Mikhail Gorbachev in the late 1980s, they are balanced by the cruel combination of poverty and violence that hit Russia in the early 1990s, as well as by the ethnic slaughters perpetrated in its satellite states over the same period. A former metal worker from a village outside Moscow sums up the feeling quite perfectly: “every time there had been change, the people had always gotten screwed. I remember what my grandfather used to say: ‘Our lives used to be shitty, really shitty, and then shit got worse and worse.'” 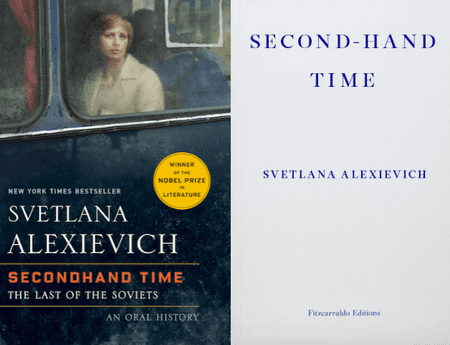 The privilege of comfort, the proximity of war, the precariousness of order – all are explored to their end, and the reader will find plenty of arguments to reinforce whatever greying worldview he or she prefers. Granted, the narratives Alexievich presents are those of individuals with intriguing stories to tell, and it may be tempting to think this book excludes the silent Soviet majority. Nonetheless, after a hundred pages or so, it becomes apparent that everyone involved had a part to play: the antagonist of one tale could easily have been the protagonist of another, character types appear and disappear in the lives of people from all over the former Union. There is no better proof of Second-hand Time’s remarkable scope; it is, in essence, the chronicle of a whole society.

So what’s one to make of it? “Marxism is saturated with the optimism of progress,” wrote Leon Trotsky in The Revolution Betrayed, “and that alone, by the way, makes it irreconcilably opposed to religion.” He was wrong, of course, and there is perhaps no greater thread linking Alexievich’s stories – or, we should rather say, linking the Soviet Union to modern Russia – than faith. From the self-described ‘Russian Orthodox patriot’ who enlisted so he could serve ‘zealously,’ to the aging Party member who joined in 1922 and was imprisoned during the Stalinist purges of the late 1930s, it becomes clear that all were at some point animated by fanatic beliefs. In the words of the latter: “You can only judge us according to the laws of religion. Faith! Our faith will make you jealous!”

The ‘Communist mythology’ (as another former Party member describes it) was replaced by the Orthodox Church in the hearts of the people, much the same way Soviet tyranny turned to capitalist thuggery. That is, besides the years in between, roughly from 1985 to 1993, when another kind of faith – that of an ideal, the hope for reform, ‘socialism with a human face’ – ruled, before being crushed by Boris Yeltsin and the crooks who profited from economic privatization. Lost in this mess, post-Soviet states are torn between two kinds of conservatism: misguided nostalgia for regimented lives of Communism (whose adepts are now condescended to as sovoks, a pun on the word for ‘dustpan’), and the religious panderings of oligarchs in power. Crushed by those extremes, the only progressives left, then, are the few who now risk their lives for democratic reform (protests in Moscow were held between 2011 and 2014, likewise in Minsk in 2011). But surely they must know too, at this point, just how much their countrymen have been made to dislike change. If Trotsky was right about one thing, it was on the fate of revolution.