How To Make the Most of 24 Hours in Minsk, Belarus 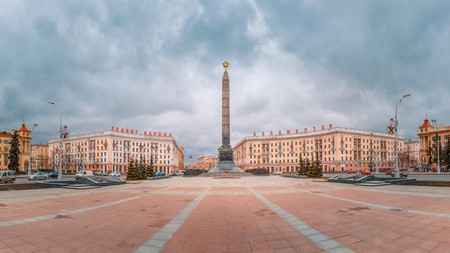 While Belarus remains a terra incognita for many travellers, the country has slowly been making its way onto the tourist radar since relaxing its visa regulations in 2017. Spending 24 hours in the country’s capital, Minsk, is a great introduction to any Belarusian adventure. 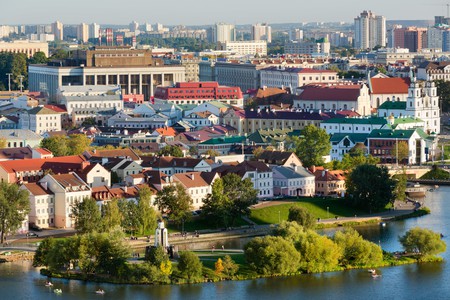 Known as a clean and safe city, behind Minsk lies a storied history. A century ago, Minsk was at the border separating western Belarus from the Soviet-occupied eastern region; the city was a thriving centre of culture and trade, with its diverse population including large Jewish, Polish and Tatar communities. The present-day city bears the marks of a tumultuous 20th century, and with 24 hours in the Belarusian capital you can take in Soviet-era architecture and cuisine, along with a taste of what makes contemporary Minsk tick.

At the time of its construction in the late 1940s, the Minsk Tractor Plant District (Traktarazavodski pasyolak) was a standalone residential community, a city within a city. Built for the workers at the nearby Belarus Tractor Plant, the neighbourhood’s design took its lead from the utopian impulses of the day, and is notable for its unique architectural ensemble, characterised by low-rise two-storey buildings and ornate Neoclassical adornments. With a priority placed on large open spaces and green areas, the district is also relatively tranquil compared to other areas of the city. Walking through the neighbourhood today, you can still find remnants of its former glory, including elaborate plasterwork, pilasters, stone lions, laurel wreaths and spired towers. Look out for camera crews – many local and Russian TV series are filmed here.

Enjoy coffee at the ‘House With the Mermaids’

Mon Nom – the ideal spot for a morning coffee. 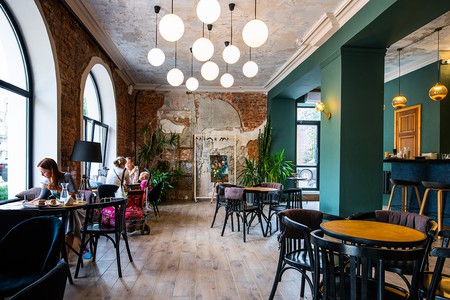 How to get here: Take the metro to Traktarny Zavod station, then walk along Skvier Klumava Park on Vulica Klumava for about five minutes. Keep your eyes peeled for the mermaids on your left.

When you stand in front of Minsk’s impressive Komarovka Market, it’s hard to imagine that this area was once deemed too dangerous for visitors to explore. Times have changed, and instead of trouble you will now come across a colourful selection of reasonably priced produce and freshly prepared food to go. The large indoor pavilion – unique in its lack of pillars – comprises endless stalls selling meat, dairy products and spices, while outside you can shop for fruits and vegetables directly from local farmers. Among the highlights at Komarovka are freshly baked pirozhki (Russian buns filled with meat, cabbage or potato, among other things) and flavourful Uzbek plov. Fun fact: the first part of the market’s name – Komar – means ‘mosquito’, harking back to when the area around Minsk was swampland and mosquitoes abounded.

How to get here: Take the metro to Ploshcha Jakuba Kolasa, then cross Vulica Jakuba Kolasa and walk down Vulica Viery Charuzhaj. In five minutes’ time, you will see a fountain on your right, and behind it the market gates.

The corporate collection of Belgazprombank, exhibited at its private gallery, exceeds 100 artworks, some of which date back to the beginning of the 16th century. Although not nearly as big as the collection of the National Arts Museum of Belarus, it boasts an impressive array of works by Belarusian-born painters of the École de Paris. Many names, such as Faïbich-Schraga Zarfin and Ossip Zadkine, were virtually unknown until the gallery opened in 2012. You can also find works by Chaim Soutine, along with the world-renowned Marc Chagall and Léon Bakst – both born in what is now Belarus – along with some of the early printing masterpieces. These include The Little Travel Book by Francysk Skaryna, one of the first books printed in Eastern Europe, and The Warder of Power by Simeon of Polotsk, a Belarusian monk and enlightener. The gallery is open every day except Mondays, from 11am to 8pm.

How to get here: Exit the metro at Ploshcha Peremohy and cross Vulica Kazlova. The gallery is located inside the Palace of Art at Kazlova 3.

For about a decade after the end of World War II, Minsk resembled something of a large-scale construction site. Almost entirely destroyed in the bombings, Minsk lost much of its historical identity, and Soviet architects worked to design a model city, where everything would conform to the ideals of a social utopia. To this day, Stalinist-era buildings line both sides of Independence Avenue, the main thoroughfare that crosses the city from north-east to south-west. Save some time for a stroll along the avenue and don’t forget to make a stop at Independence Square, previously Lenin Square, where a statue of the former Soviet leader can be seen looking into the distance from his tribune. 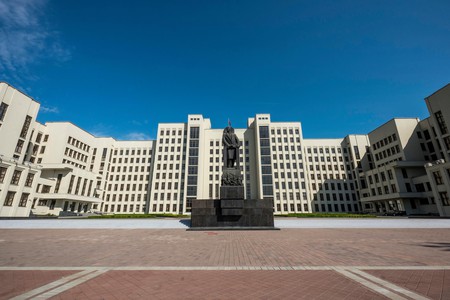 Have you ever seen a play in an ordinary apartment or the basement of someone’s country house? For Belarus Free Theatre, an underground theatre group, the whole city is a stage. Since its first production, Sarah Kane’s 4.48 Psychosis, the theatre has been exploring the taboo topics of mental health, homosexuality and suicide through a series of daring, cutting-edge performances. The theatre never discloses its locations prior to the show – to secure a place, you must contact the team on Facebook.

Drink a shot of vodka at Tsentralny

Constructed in 1954, the Tsentralny Cafeteria became the embodiment of luxury during the Soviet era with its opulent interior. The colourful frescoes decorating the pillared hall depict scenes from the life of model Soviet workers: a milkmaid, a fisherman and a peasant woman. One of the walls is decorated with a cornucopia of fruits, pastries, cheeses and bottles of Soviet champagne, symbolising economic prosperity. The cafeteria maintains a reputation as the cheapest in the city, attracting patrons from all walks of life. Some come for the sweet nostalgia of Soviet desserts; others for a shot of vodka. Set on the ground floor of a department store, Tsentralny is the sacred heart of Minsk, where the past and the present exist side by side.

How to get here: Exit the metro at Kastrychnitskaya and turn right. Tsentralny is located in the same building.

Sample culture and burgers on Kastrychnitskaya

Kastrychnitskaya has long been the centre of gravity for street culture in Minsk. Home to cultural hubs, galleries, and multiple art and music festivals, it brings together young and old. The area’s vibrant and creative energy is reflected in its colourful murals – the living heritage of Vulica Brasil, a festival that draws dozens of international street artists to Minsk each year.

Though perhaps not the first food to come to mind when you think of Minsk, burgers are undoubtedly having a ‘moment’ in the Belarusian capital. The opening of the first Burger King in 2015 started a chain reaction, with dozens of burger restaurants popping up across Minsk. For the best the city has to offer, head to hipster BurgerLab or its older cousin Enzo.

How to get here: Exit the metro at Pershamaiskaya and walk down Vulica Lienina. Turn right before reaching a large mural and walk one block.

Bar-hop your way through Zybitskaya

The vibrant Zybitskaya bar district has taken up residence in abandoned buildings that once played host to underground raves, though the street is just as lively as ever – only now with nightly live shows and concerts. Check out Cherdak, a cosy rooftop spot and the longest-established bar on Zybitskaya Street; cross the road and dive into Banki-Butylki, where you’ll find the best shots in the city; then go to El Pushka, a cocktail lounge where the party never ends.

How to get here: Exit the metro at Niamiha, walk towards the Svislach River and turn right. You have reached the beginning of Zybitskaya Street.