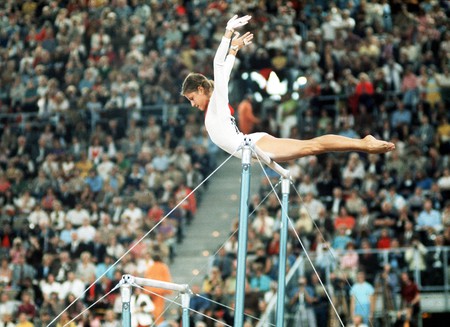 Soviet gymnast Olga Korbut, the diminutive Belarusian who brought perfection to the Munich Olympics, has been forced to sell her medal haul because of financial difficulties.

At 4ft 11in (1.5m) Korbut earned the nickname the “Sparrow from Minsk” when as a 17-year-old her routines in Munich astounded the public. Whether a connoisseur and veteran of gymnastics, or a complete novice who had tuned in by accident, everybody was fully aware of the utter excellence that Korbut produced. It wasn’t simply her technical ability, but her personality and charm that won fans over and endeared her to millions.

Only the very best in sport have moves named after them; The Cruyff Turn, the Fosbury Flop or the Ali Shuffle. The Korbut Flip is still a popular move today, although it’s sheer difficulty means that it is banned and is no longer included in the Olympic Code of Points during competition.

Her performances in Germany were more than simply winning medals. Korbut transformed her sport entirely, forcing a shift from older elegance, to athletic ability. After Korbut, gymnasts had to marry strength and physicality with the same svelte grace that she could produce. What’s more, her achievements came during the Cold War, and did far more for American-Soviet relations than any politician or embassy could achieve. American gymnasts of the same era were taught that their Soviet rivals were robotic machines, churned out on a conveyer belt of emotionless discipline, before this endearingly vulnerable, pig-tailed teenager transformed perceptions and stereotypes.

In later life Korbut, who openly admitted that fame overwhelmed her, has struggled with her health and with family relationships, and an attempt to open her own gymnasium failed after her coaching career faltered. Gazeta.ru, the Russian news agency, claimed that the recent sale of her medals “saved her from hunger”.

The unfortunate circumstances, if true, are upsetting to hear. The “Sparrow from Minsk” was capable of flying during her routines, but the demands of society and her own celebrity status have clipped the wings of an astonishing athlete.