Top Things to See and Do in Ganja, Azerbaijan 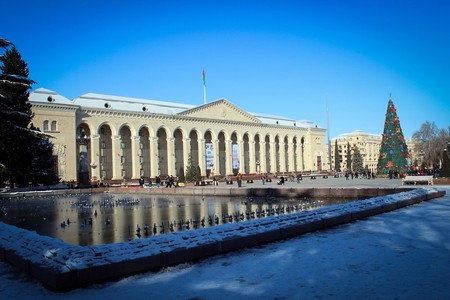 Azerbaijan’s second and rarely visited city offers tourists the chance to experience the historical and ancient. Unlike Baku, the oil money hasn’t filtered through and the city remains unchanged, preserving its traditional features. For those looking to experience the ‘real Azerbaijan’ check out these top things to do in Ganja.

The central historical park often rates as one of the first things to do in Ganja. Between 1786 and 1804, Javad Khan became the last Khan of the Ganja Khanate before the Russian Empire took control. Back when Javad was in power, he enjoyed nature and planted several trees inside his garden. The Soviets destroyed most of it. Today, locals come here to relax and play board games among the shady trees. A small stage sits towards the far side of the garden and sometimes hosts public performances. Come and unwind at one of the cafés inside Khan’s Garden after a day of sightseeing. 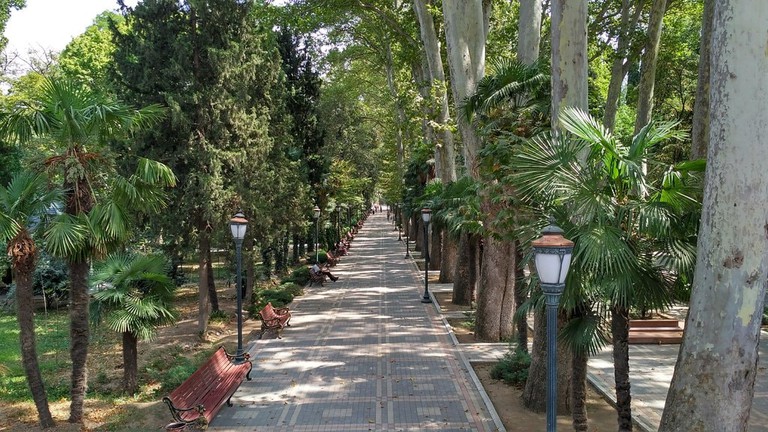 Locals, especially the older men often sit and hang out with their friends in Khan’s Park | © Sam Bedford

The imposing Soviet-style City Hall dominates Ganja’s central square. Anyone with experience in Tbilisi might spot the resemblance with Georgia’s Parliament Hall. The similarities arise because the Soviets designed both as twin versions of each other. Inside City Hall, tourists can visit the Heydar Aliyev Museum. Enjoy the square during the day and return after dark to see the buildings light up. A few cafés and restaurants are nearby too. 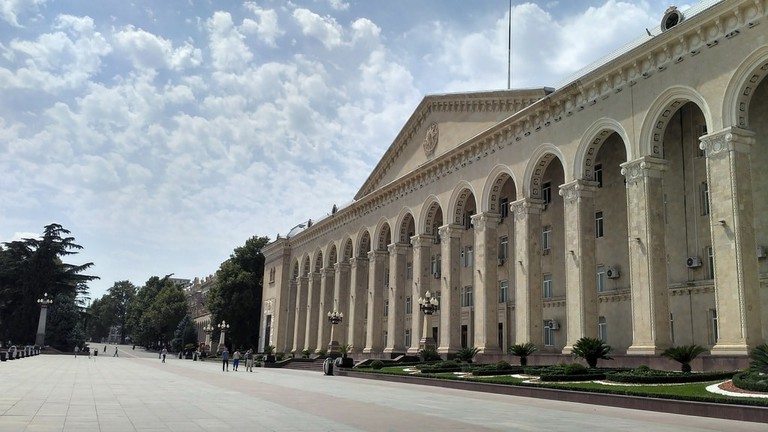 Although not one of the top things to do in Ganja, the State Philharmonic Hall combines architectural beauty with an interesting backstory. The Imperial Russians destroyed the former walled Khan Palace in the 19th-century. The Soviets then demolished the rest as they repurposed Ganja’s historic buildings. The palace became a cinema. After Azerbaijan’s independence in 1991, they demolished the Soviet Cinema and built the Philharmonic Hall. 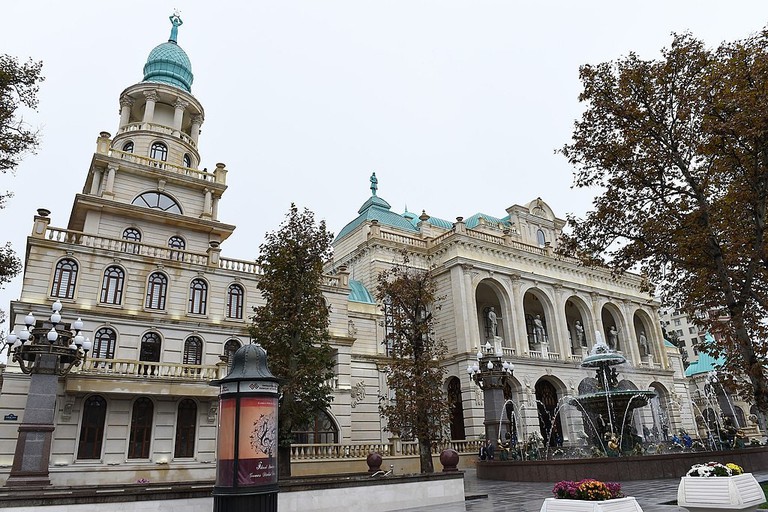 An elegant piece of architecture | © Presidential Press and Information Office/WikiCommons

Once a German Lutheran Church serving the sizable German community in Ganja towards the late 19th-century, now a theatre on Ahmad Jamil Street. Although it’s not much to look at and performances are irregular, the former Lutheran Church makes an interesting thing to see in Ganja. Worshippers used the church from its construction in 1885 until the Soviets turned it into a theatre in 1941.

Javad Khan Street is Ganja’s pedestrianised area. The historical buildings lining the paved street come with their own story. Stroll through and marvel at the architectural styles of a bygone era. After snapping a few photographs and marvelling at the fountain and sculptures, grab a coffee in one of the cafés. The few souvenir shops selling traditional Azerbaijan trinkets are worth checking out too. Most people spend up to 20 minutes strolling through Javad Khan Street (excluding coffee time). 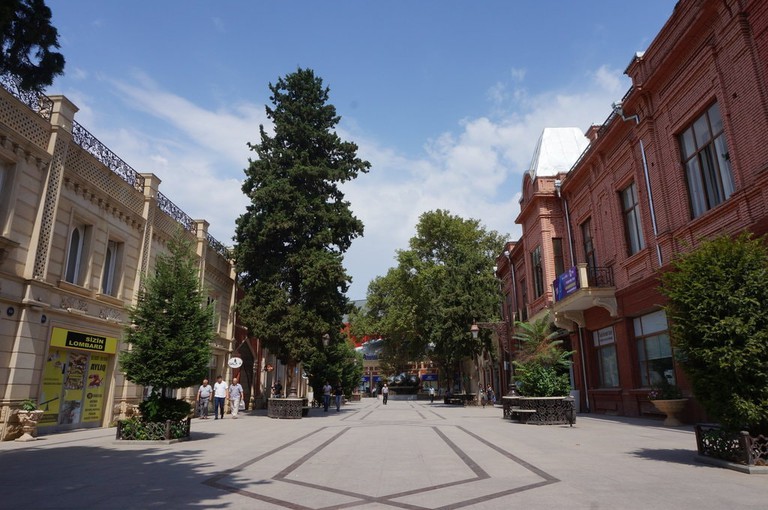 A great place to find food, souvenirs and to enjoy a coffee | © Sam Bedford

Bottle House often ranks as one of the top things to do in Ganja. The unusual and quirky building near Nizami Ganjavi Street uses over 48,000 bottles in the masonry. According to the story, the Jafarovs family lost a relative during World War II. They decided to construct the house with bottles and dedicate it to those who lost their lives. An image on the interior wall honours their lost brother. The coloured stones on the exterior façade were imported from Sochi. 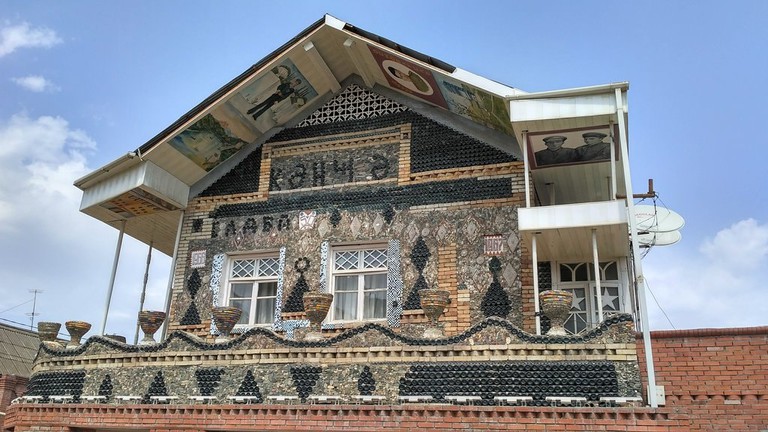 A quirky private residence made out of bottles | © Sam Bedford

Azerbaijan likes to proudly raise their flags while pushing the definition of a giant flagpole to the next level. Ganja’s Flag Square, in the same way as Baku’s, has a gigantic pole soaring 70 metres (300 feet) into the air. The nearby plaque contains a marble emblem of Azerbaijan. Not necessarily one of the most important things to do in Ganja, but worth visiting for a photograph.

Located approximately 60 kilometres (37.3 miles) southeast of the city centre sits a town by the name of Naftalan. Naftalan also shares its name with a type of oil. There’s a reason for this – people come here to bath in crude oil. While this might seem unusual, the therapy’s origin dates back more than 1,500 years. Brave tourists can visit and submerge themselves into the bath to experience the bizarre practice for themselves. The vast majority of visitors take a day trip to Lake Goygol, why not head to Naftalan for a more unusual and somewhat different experience on your trip to Ganja? 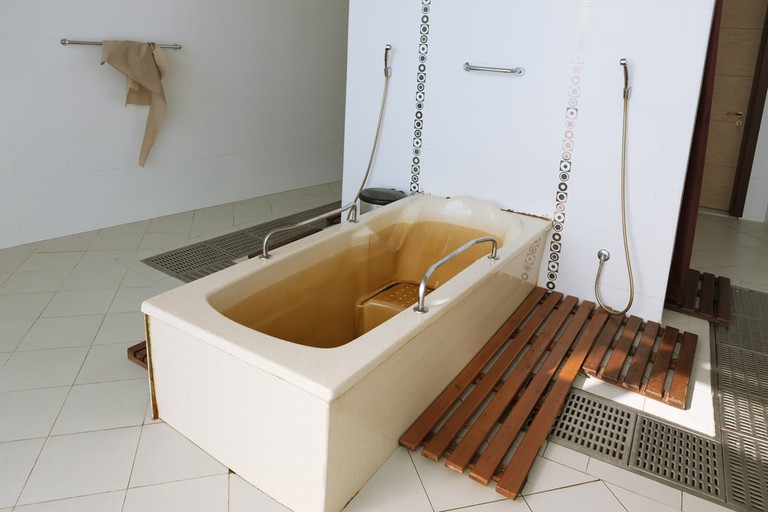