The Ultimate Guide To Hiking the Caucasus Mountains 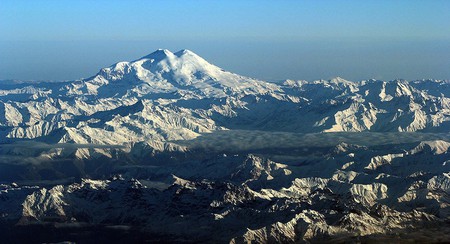 The Caucasus Mountains stretch southeast from southern Russia near the Black Sea to Azerbaijan’s Absheron Peninsular on the Caspian Sea. Two distinct ranges exist: The Greater and Lesser Caucasus. An alley of relatively flat plains extend northwest through Azerbaijan and Georgia between both. The Greater to the north houses Europe’s tallest peak, Mount Elbrus, at 5643 metres (18,510 feet). The Lesser arches along the border between Azerbaijan and Armenia. 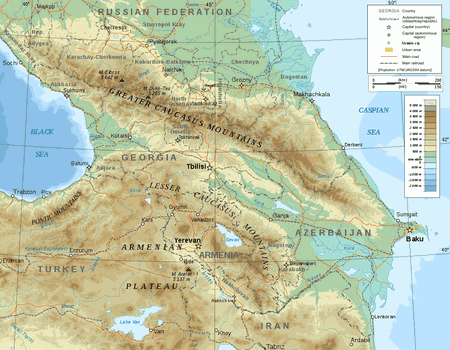 Where the Caucasus Mountains are located on the map | © Bourrichon/WikiCommons

Where to Go Hiking in the Caucasus Mountains?

One of the biggest appeals to hiking in the Caucasus is also its greatest pitfall: uncharted wilderness. Few trails exist, and those that do might be cow trails and have a tendency to vanish. Unlike in the West, locals usually don’t consider hiking as recreational.

That being said, as tourism rises in Georgia, more trails are opening. The untapped potential of hiking in the Caucasus Mountains is becoming a reality. Most Georgian treks tend to follow their northern border with Russia, lasting several days.

Head south to Azerbaijan, and find even fewer official trails. But the opportunity to visit ancient mountain villages allures the adventurous. Travel north from Baku to Quba, a region nestled on the Shahdag Mountain’s northeastern slopes at 600 metres (1969 feet). Little more than 40,000 residents call Quba home in the landscape that mixes mountains, culture and diversity.

Several villages rich with history and culture include Khinalig at more than 2000 metres (6562 metres), Lahij and Saribash. Most trails are shepherd and cattle paths. Find a guide. Historical Sheki at the foot of the Greater Caucasus sits at 500 metres (1640 feet), while the saw-toothed peaks to the north reach 3100 metres (10,170 feet). 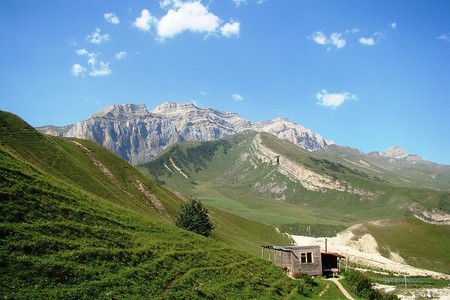 An ambitious project began a few years ago to create a 1500-kilometres (932 miles) route connecting the Black and Caspian Seas via the Caucasus Mountains. Still in its infancy and using crowdfunding, the Transcaucasian Trail aims to become the first easy-to-follow trail. When it opens, hikers will pass through peaks reaching 5000 metres (16,400 feet) and almost forgotten villages. For the first time, outsiders have the opportunity to experience the amalgamation and diversity of Caucasus culture, language and landscapes.

Mount Elbrus, summiting at 5643 metres (18,510 feet), holds the title as Europe’s tallest. Compared to other global climbs, Elbrus near the Russian-Georgia border is relatively easy. Expeditions tend to take less than a week to the top. Climbing permits are required. Guides are essential. Either find a guide based in or out of Russia, and factor in getting a Russian visa. 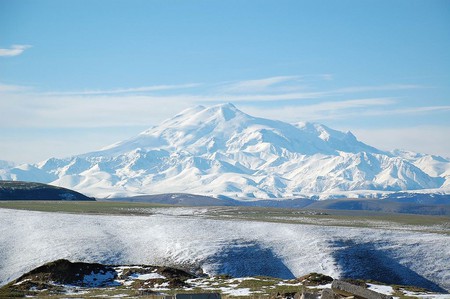 Because of its diversity, the Caucasus region remains politically unstable. Getting from one destination to the next might not be as straightforward as it seems. Southern Russia in the Greater Caucasus and Georgia have breakaway republics, including Russia’s Chechnya and Dagestan, and Georgia’s Abkhazia and South Ossetia.

The Nagorno-Karabakh remains a hotly contested dispute between Azerbaijan and Armenia and is the cause of their ongoing conflict. And to make the situation more complicated, the border between Azerbaijan and Armenia is closed. Turning up in the first with a visa stamp from the second can cause suspicion from immigration officers. Armenia’s long border with Turkey to the west is closed too.

Hiking in the Caucasus is in its infancy. But as the former Soviet Republics start to adopt change and embrace tourism, authorities slowly grasp the untapped potential. Visit in 2018, and feel like you’re on an expedition into the unknown. Return in the future, and hiking from village to village might be the norm.