The Most Beautiful Architecture in Baku, Azerbaijan

Night view of the Flame Towers in Baku, Azerbaijan | © RAndrei/Shutterstock
Baku has a medieval Islamic core surrounded by lavish late 19th and early 20th-century European styles and modern skyscrapers and designs. Layers of history can be unravelled by exploring the architecture in Baku as you pass through Azerbaijan’s different eras.

A brief history of Baku

It’s important to know the city’s story before you experience the historical journey through architecture. Two millennia ago, Zoroastrianism, a type of religion based around worshipping fire, thrived. Ischeri Sheher, the Inner City, grew and became fortified in the 12th-century. The Shirvanshahs resettled in Baku making it the new capital in the 15th-century after an earthquake destroyed Shamakhi.

Endless conflicts followed between the Persians, Ottomans and Imperial Russia. Russia gained control in 1813. The first oil boom in the 19th-century made some wealthy barons who then commissioned large mansions and palaces. The Soviets later ruled for most of the 20th-century. Azerbaijan’s natural resources and their second oil boom pays for the modern skyline today.

The architecture in Baku has four distinct flavours: the medieval inner city, the lavish styles from the first oil exploitation, Soviet neighbourhoods and contemporary designs. Let’s take a look at where to go in Baku to experience each.

Hotel
The Inner City dates to the 12th-century. You’ll see lots of Islamic styles like the Palace of the Shirvanshahs, old mosques and former bathhouses. Streets branch and twist as the old town rises gently up the hill. Vendors sell traditional Azerbaijan carpets and souvenirs here. Maiden Tower, a large cylinder poking into the sky of unknown origin, is a classic example of medieval architecture in Baku.

Building
Ismailiyya Palace in Baku | © Leonid Andronov/Shutterstock
When Baku became part of the Russian Empire, oil exploitation made people rich. And the rich liked to show off their wealth with lavish mansions. Baron Agha Musa Naghiyev was no exception. But, the story of his Ismailiyya Palace is a sad one. His son died, and the baron decided to build a huge symmetrical mansion on Istiglaliyyat Street in honour of his late son. Construction finished in 1913.
More Info
Open In Google Maps
İsmailiyyə Sarayı, 10, Istiglaliyyat Street Səbail Bakı, Azerbaijan
View menu
Visit website
Visit Facebook page
Send an Email
Give us feedback

Theatre
The imposing yellow and black art nouveau Opera and Ballet Theatre, typical of Imperial Russian architecture, opened in 1911. As you admire the intricate façade and exquisite design, think about the building’s bizarre history. The story goes something like this: a wealthy magnate was upset he didn’t get invited to a party at an opera star’s mansion. So he decided to build his own, today’s theatre. But that’s not all. He made a bet with another baron who had to pay if it wasn’t finished in 10 months. Construction finished in the time, and the magnate won his bet.
More Info
Open In Google Maps
Nizami Baku, Azerbaijan
+994124931651
View menu
Visit website
Visit Facebook page
Send an Email
Give us feedback
Book Now

Building
The neo-gothic former mansion is another example of oil tycoons splashing their cash on architecture in Baku. Murtuza Mukhtarov hired Polish Jozef Plosko to replicate a building his wife liked in France. The Palace of Happiness took just nine months to build in 1912. Russian Bolsheviks stormed inside in 1920 in which the baron responded by shooting three officers before turning the gun on himself. Today, the five-storied historical building fittingly houses the Palace of Marriage Registrations.
More Info
Open In Google Maps
Səadət Sarayı Nərimanov Bakı, Azerbaijan
View menu
Visit website
Visit Facebook page
Send an Email
Give us feedback

Building
Government House in Baku | © saiko3p/Shutterstock
Book Now
Looking at the gigantic House of Government in central Baku along Neftchiler Avenue, you sense a feeling of architectural beauty. It can be hard to imagine such a beautiful baroque building, which lights up after dark, was commissioned by the same rulers who build endless rows of ugly blocks in much of Eastern Europe. Construction finished in 1952 to hold 5500 people in ministerial positions. Today, it’s one of the most attractive styles of architecture in Baku.
More Info
Open In Google Maps
84 Üzeyir Hacıbəyov, Səbail Bakı, 1000, Azerbaijan
+994124937064
View menu
Visit website
Visit Facebook page
Send an Email
Give us feedback

Church of the Saviour, Baku

Church, Concert Hall
The three-storied gothic Lutheran Church near 28 May Street dates back to the late 19th-century. During Baku’s oil boom, Europeans, including many Germans, flocked to get a piece of the action. The church, commonly referred to its German name kirche, replicates similar versions back in their motherland. When the Soviets arrived, the attendees promised to pray for Stalin if he didn’t demolish it. The Soviets executed the Lutherans the following year. The Church later became a concert hall.
More Info
Open In Google Maps
Dilarə Əliyeva Küçəsi, Nəsimi Bakı, Azerbaijan
+994124938041
View menu
Visit website
Visit Facebook page
Send an Email
Give us feedback

Azerbaijan’s history and culture intertwines deeply with fire. From the Zoroastrian worship to the modern day natural gas reserves fuelling the economy and paying for the skyline. If you want to experience contemporary architecture in Baku, Flame Towers are the first stop. The trio of skyscrapers with curved and triangular designs resemble three flickering flames.

Built on a hill, the tallest reaches 182 metres (597 feet) making it both an icon of Baku and the tallest skyscraper in Azerbaijan. The magic starts after dark when the towers light up and alternate between the colours of the Azerbaijan flag and the colour of fire. 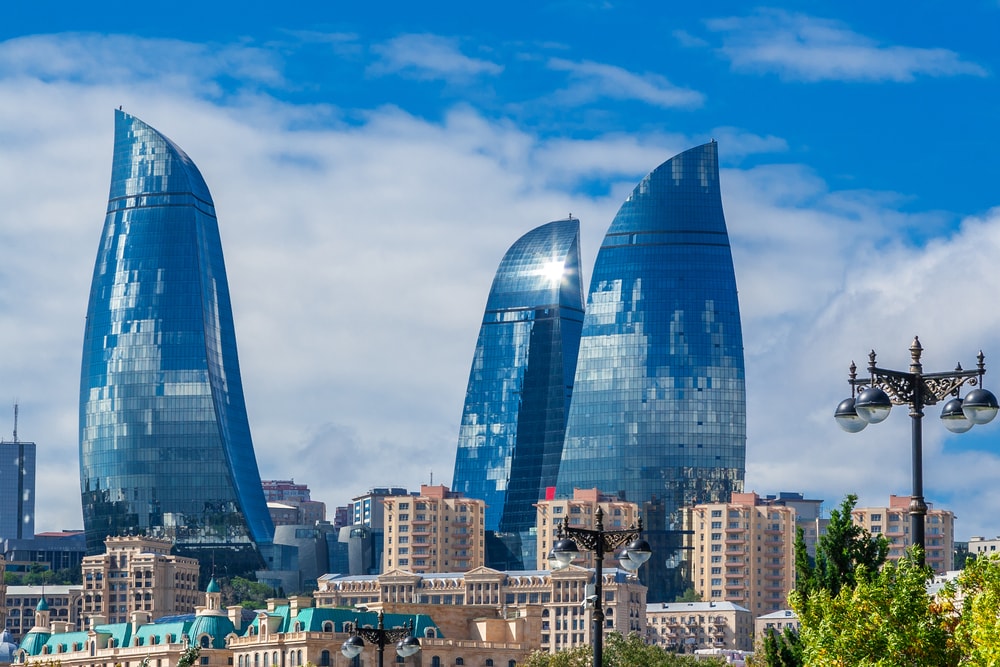 Construction finished in 2012 and architect Zaha Hadid has won many awards for her innovate design. The interior holds a museum, conference hall and gallery. If you want to visit this unique style of architecture in Baku, take either the red or green line to Nariman Narimanov metro station. Heydar Aliyev Center is five minutes away on foot.
Opening hours: Tuesday to Sunday from 11:00am to 6:00pm. Closed on Monday.
More Info
Open In Google Maps
1 Heydər Əliyev prospekti, Nərimanov Bakı, 1033, Azerbaijan
+994125056001
View menu
Visit website
Visit Facebook page
Send an Email
Give us feedback
Book with our partner and we will earn a small commission.
Give us feedback