Tourists and sellers in Icheri Sheher | © Elena Odareeva/Shutterstock
Visiting markets and getting involved in the daily commotion tends to be the easiest way to peek into a country’s local way of life and culture. And few things make such a contrast between the capital’s wealth and lifestyles than the items found in the suburban markets in Baku.

Before diving into the best street markets in Baku, let me first explain a few tips and suggestions. Local markets range from sprawling bazaars to obscure flea markets and stalls selling touristy souvenirs. Others sell fresh fruit and vegetables, snacks and clothes, along the side of the street.

Baku’s two famous ones include Taza Bazaar and Yasil Bazaar. The others get very few, if any, foreign tourists making them almost impossible to find without local help. If you want to explore the more out of the way markets in Baku, ask a tour guide or hotel receptionist for directions and recommendations.

Not many people speak English in Baku, especially in the neighbourhoods away from the centre. Learn a few phrases in Azerbaijani or Russian to help you communicate with the locals.

Bazaar, Market
Experience the markets of Taza Bazaar | Experience the markets of Taza Bazaar
If you want to experience the local Azerbaijan culture without travelling too far from the centre, head to Taza Bazaar. The largest market in Baku sits halfway between Nizami and 28 May Metro Station. Locals say the bazaar opened more than 70 years ago, surviving the Soviet Union. Today, people buy fresh produce, nuts, herbs and a variety of oriental spices. And fresh Beluga caviar, an Azeri delicacy, along with Caspian Sea fish fill some stalls. The market combines sensory experiences. Photogenic sites capture the essence of ordinary life, and the smells of exotic spices and fish linger in the air.
Opening hours: Daily from 8:00am to 7:00pm.
More Info
Open In Google Maps
Nasimi Baku, Azerbaijan
View menu
Visit website
Visit Facebook page
Send an Email
Give us feedback

Yasil Bazar, or ‘Green Market’, offers an authentic local experience when you travel to Baku. When you’re in the centre, Icheri Sheher, or the shopping malls, you’ll see few working-class Bakuvians. Get away from the city’s core, and stroll to the train station to find the local’s favourite market in Baku.

People from around Azerbaijan sell organic vegetables and fruit including grapes and pomegranates at Yasil Bazaar. Lower prices and making a direct contribution to the local economy makes this bazaar a win-win for everyone.

At the local market in Baku. #azerbaijan #Baku #bakumarket

Market, European
The flea market in Sanbunchu district gives visitors a glimpse into the real lives of Baku’s inhabitants. Not everyone experiences the wealth from the nation’s second oil boom. Residents sell various trinkets including Soviet memorabilia along with old clothes and electronics. The people in this impoverished neighbourhood descended on this weekend flea market to try to generate a little extra income during tough Soviet times. The traditional market has lived on until today. As intriguing as this weekend flea market might be, it’s almost impossible to find without local guidance or by joining a tailor-made tour.
Opening hours: Saturdays and Sundays from 9:00am to 4:00pm
More Info
Open In Google Maps
Baku, Azerbaijan
View menu
Visit website
Visit Facebook page
Send an Email
Give us feedback

Spending time in the medieval Icheri Sheher always ranks as one of the top things to do in Baku. And where wealthy tourists go, vendors follow. Stroll through the historical streets, and pass shops selling traditional Azerbaijani carpets. Other stalls hawk the typical souvenirs such as fridge magnets, keychains and Soviet memorabilia. 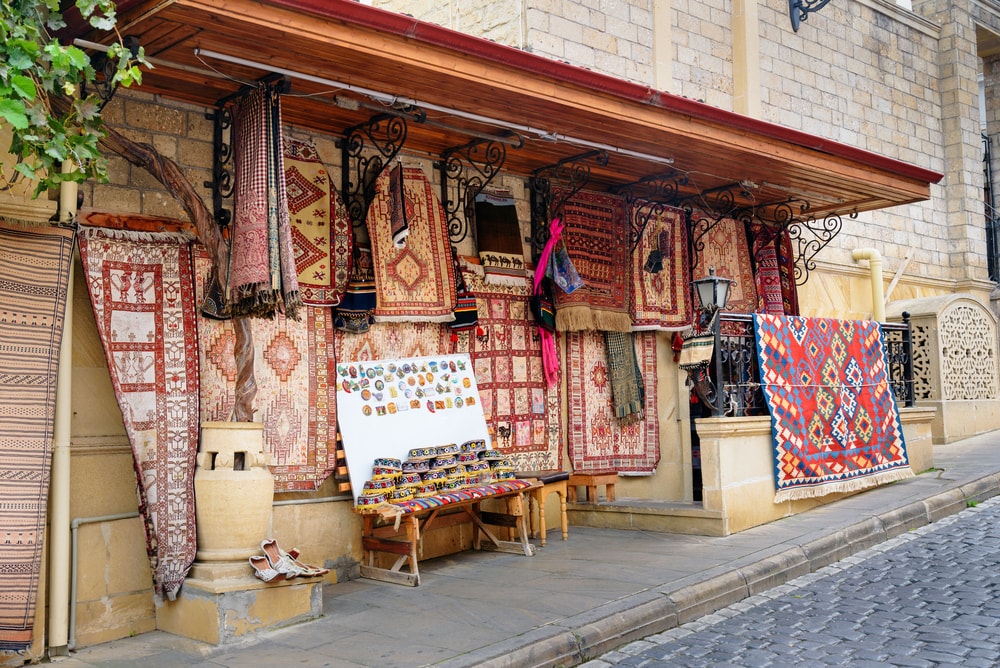 Other Markets in Baku

Visit Baku and stroll through the streets. More likely than not, smaller street markets will serendipitously appear. People often sell from the back of their cars, while vendors sit around or wander the streets hawking their goods. Some sell flowers and others, traditional Azerbaijan food. Adventurous tourists might also find the iron bazaars where crafters sell their metalwork. Before getting too excited, remember the following: The only sure way to experience these markets in Baku is to ask a local for recommendations.

On Food Stories right now: some snaps and words about food I ate in Azerbaijan 👌🏼This guy was selling apples in a market just outside Baku.