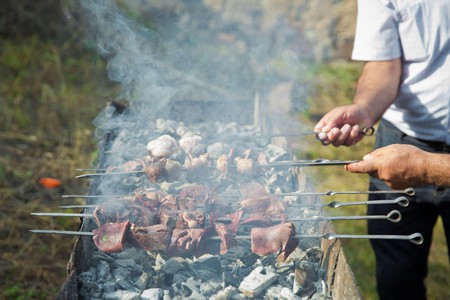 Trying authentic Azerbaijani food should be a priority on any visit to Baku. Culture Trip asked culinary experts for their must-try local dishes and where to find them in the Azerbaijani capital.

After the Soviet Union dissolved, national Azerbaijani cuisine underwent a period of significant restoration. Culinary experts such as the late Shahgusein Kerimov and others stepped forward to restore the country’s gastronomic heritage. Their efforts succeeded not only in reclaiming lost dishes of the past but also in ushering Azerbaijani cuisine into a new stage of innovation, fostering a new generation of chefs. Some of these culinary innovators were kind enough to share their recommendations with Culture Trip.

Originating in the town of Quba in the 19th century, taxta qovurma, or ‘wood roast’, is a mix of tender beef chunks, pepper, cream, onions, cream cheese, tarragon, and butter. Baku’s Qazmaq Café & Restaurant is one of only a few downtown restaurants that serve this meal. The restaurant’s head chef, Nabi Sultanalioglu, explains that the dish is baked in an oak container in a natural charcoal oven. The chef recommends complementing this meal with choban (shepherd) salad, which is made of chopped tomatoes, cucumbers, peppers, onion and flat-leaf parsley, or caesar salad, and pairing it with their basil compote or a local red wine. Tastefully decorated in traditional Azerbaijani design, the restaurant is located inside the Old City, with a view of the ancient city wall from the patio.

Dolma is a traditional Azerbaijani meal that features vine leaves or cabbage stuffed with a mixture of freshly ground beef mixed with lamb meat, as well as a little bit of rice, and seasoned with salt and pepper. Another variation is three-sisters dolma – stuffed tomato, pepper and aubergine. The Dolma Restaurant prides itself in having one of the best dolma specialists in Baku on board. Chef Gulaliyev Reshid says: “Dolma is one of Azerbaijan’s ancient meals, the craft of which has passed from generation to generation without affecting its unique taste.” He recommends having this meal with either mangal salad (a savoury roasted aubergine salad) or choban salad, complemented with feijoa compote. 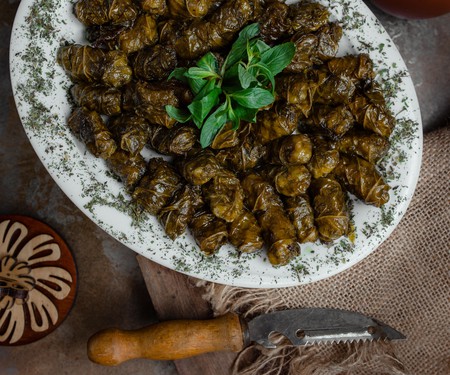 Azerbaijani cuisine boasts dozens of different kinds of pilaf. A relatively recent spin on a traditional pilaf variety, taj (crown) pilaf, has become a favourite among visitors to Azerbaijan. One of the best venues to try this is Firuze Restaurant, located in Fountain Square. The restaurant’s chef Sahib Memmedov explains that the dish is prepared by arranging lamb ribs in a crownlike manner and filling this structure with a mixture of pre-cooked rice, figs, dried apricots and vegetables, before baking to perfection. According to Chef Memmedov, the dish is best served with choban salad and fresh vegetables, and could be complemented with either cornelian cherry compote or red wine. While slightly on the pricey side, experiencing the delightfully Azerbaijani presentation and flavour makes it well worth the price tag, especially when enjoying it with live music on weekday evenings at Firuze.

Many restaurants in downtown Baku offer seafood; however, the best fish eateries are tucked away past the well-known landmark Bibi-Heybat Mosque. Darya Fish House offers a diversity of delicious fish and a stunning view of the Caspian Sea. The restaurant’s chef Zafar Rustemov explains, “all fish are caught locally, and always fresh.” Here you can enjoy salmon or walleye baked in a tandir (traditional Azerbaijani oven) and a variety of salads, paired with a local wine, at an affordable price. With indoor and outdoor seating, the restaurant features a long walking deck overlooking the sea and a large playground for children. 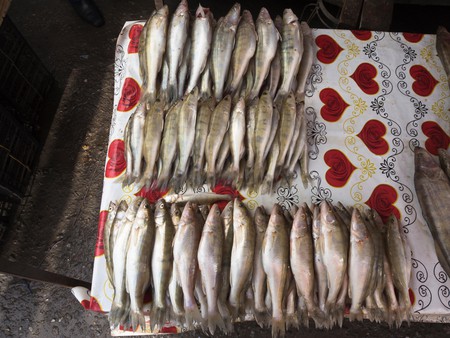 With its display of colour, sizzling sounds and breathtaking aroma, saj is an experience in itself. Served on a large iron platter suspended over a bed of hot charcoal, this famous Azerbaijani meal is comprised of lamb, beef, or chicken that is roasted alongside vegetables such as tomatoes, aubergines, peppers and onions. For the best combination of perfect presentation and price, try Yasil Abadliq. Located in Bilgah, a suburb of Baku (about a 40-minute drive from downtown), this restaurant offers more than just a great saj. After your meal, drive just a few minutes north to enjoy the ruggedly beautiful northern coast of the Absheron peninsula. 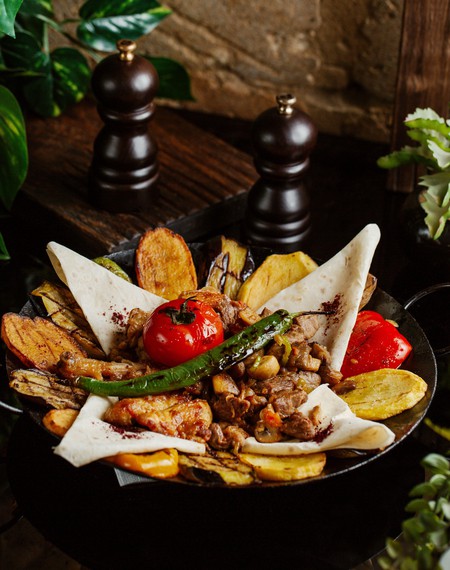 Saj can be made with lamb, beef, or chicken, served with roasted vegetables | © Kamran Aydinov / Alamy Stock Photo

Qutab is another traditional Azerbaijani dish to eat by the sea. Crispy fried pastry half-moons are filled with savoury beef, fresh greens or pureed pumpkin and sprinkled with tangy sumac. Locals hit the Baku suburb Jorat for qutab in the summer. While there are many large qutab venues along the coast, the small but outstanding Sahil Restaurant is known for the freshness of its products, talented cooks and friendly service, as well as reasonable prices. When asked what makes them stand out from other qutab makers in the area, chef Nazdi Cavadova explains that “besides our perfect execution of the traditional qutab recipe, we let quality, integrity and servitude be our guidepost.” Enjoy your qutab with fresh greens and vegetables delivered from local producers, and take a stroll along the adjacent seashore to complete your visit. 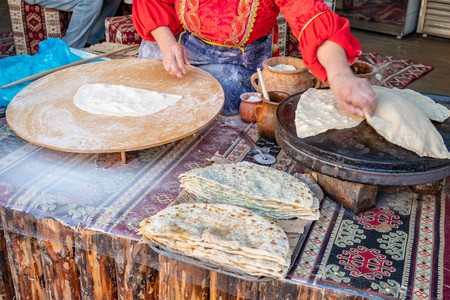 Restoring old and creating innovative new dishes, Kerimov receives credit for bringing shah pilaf into Azerbaijani culinary tradition. To try this exquisite dish, head to the Dushbara Restaurant, where one of Kerimov’s apprentices Tural Kerimli, continues to champion Azerbaijani cuisine. The chef says, “Shah [king] pilaf is indeed the shah of all pilafs, because of its eloquent presentation and taste.” The chef lines an iron pan with dough that will become a crispy crust and fills it with pre-cooked rice, lamb, dried apricots, dried grapes, chestnuts, crab apples and onion, seasoning it with salt and pepper before sealing the filling with more dough. After removal from the oven, the golden, crispy crust is cracked open to reveal the complex aroma of the lamb and fruit mixture baked inside. 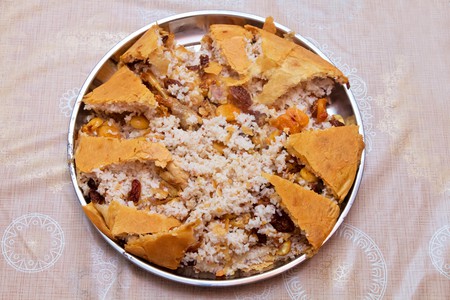 The most common kebabs in Azerbaijani cuisine are lule (minced meat), dana bastirma (beef chunks), and vegetable (primarily tomato, aubergine, and pepper), all of which you can try at Fisincan Restaurant. Chef Senan Mammadov describes lule kebab as a mixture of ground beef, lamb and a small amount of fat, seasoned with salt and black pepper. For dana bastirma, on the other hand, beef chunks are marinated with a mixture of natural pomegranate juice, parsley and onion, and seasoned with salt and pepper. After marinating, the chef skewers and cooks the meat on natural charcoal. Consider pairing with feijoa compote or dry red wine. 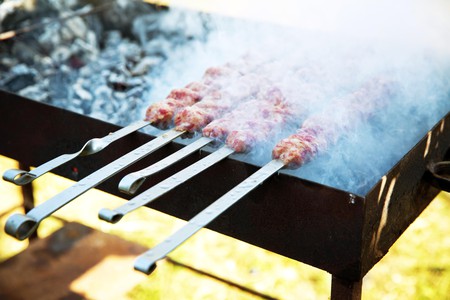 There is nothing more traditional than an Azerbaijani breakfast spread, which may include omelettes and pancakes, wild natural honey, white cheeses such as feta or goat’s cheese, sour cream, butter, an array of organic jams, cottage cheese, thick cream and sausage. Breakfast is always served with hot black tea. If you want to experience a truly authentic Azerbaijani breakfast in the ambiance of traditional-carpet-inspired décor, visit Passage 145. The restaurant also serves kuku, a traditional Azerbaijani combination of fried organic greens and eggs.