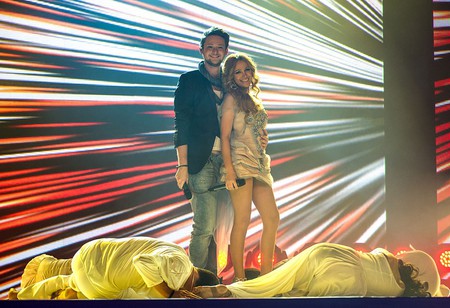 Since 2008, Azerbaijan’s performance in the Eurovision has put the country on the international radar. Since Ell & Nikki’s win three years later and Baku hosting the contest in 2012, more tourists have visited the country. Here’s your guide to the Azerbaijan Eurovision from their debut act to the present day.

Azerbaijan’s first entry into the Eurovision Song Contest was a hit. Elnur and Samir performed ‘Day After Day’ and finished a respectable eighth. The song mixed traditional Azeri folk mugham and opera, producing a hypnotic and trance-like performance, especially with Elnur’s incredible operatic vocals. Lyrically, ‘Day After Day’ represents the battle between good and evil. Elnur and Samir dressed as an angel and demon on stage.

After their debut success, Azerbaijan returned with force the following year in Russia. The song, ‘Always’, not only finished third, but it also entered the charts around Europe. Aysel and Arash’s song describes the complex and obsessive emotions of falling in love. Azerbaijan culture is represented in the performance with the use of a traditional string instrument called a tar.

Safura sang ‘Drip Drop’ at the age of 18 to earn Azerbaijan fifth place in the 2010 Eurovision Song Contest in Oslo. The title and lyrics describe heartbreak with ‘drip drop’ referring to falling tears. After a huge success in the contest, Safura went to number one in the Polish charts kick-starting her career as a musician and later, as an actor.

The year 2011 was Azerbaijan’s year. Baku-born Eldar Gasimov and British Azerbaijani Nigar Jamal formed a duet called Ell & Nikki. After giving an incredible performance with ‘Running Scared’ and gaining a total of 221 points, the duo won the competition in Dusseldorf. Neither Eldar nor Nigar had sung in a duet before, and they became the first mixed-gender winners in the Eurovision since 1963. Both became national heroes after the Azerbaijan Eurovision win and have successful solo careers today. The winning song describes a madly in love couple afraid that their mutual obsession could fall apart at any moment.

After Ell & Nikki’s victory, the competition was hosted in Baku the following year inside the Baku Crystal Hall. The ballad, ‘When the Music Dies’, performed by Sabina Babayeva tells the story of someone desperately trying to keep a relationship alive. The nation finished a respectable fourth in the Azerbaijan Eurovision with 150 points behind Serbia, Russia and runaway leader Sweden, with a whopping 372 points. If you visit Baku, follow Baku Boulevard to Flag Square to visit Crystal Hall.

Another incredible performance this time by Farid Mammadov with ‘Hold Me’, which finished second with a total of 234 points. The song has a slight R&B twist, and the dramatic performance mesmerised viewers. As Farid sang, a dancer inside a glass cube mirrored his movements.

The year 2014 signalled the end of two eras in Azerbaijan. Both oil prices and their position in the Eurovision plummeted. The Manat fell to 50% of its former value, and Dilara Kazimova’s ‘Start a Fire’ ended twenty-second with just 33 points. Despite the song using a balaban (a traditional instrument similar to a flute) and combining modern and folk elements, the Azerbaijan Eurovision dream ended. They finished fifth from last.

Elnur made a return to the 2015 Eurovision hosted in Vienna, performing ‘Hour of the Wolf’. In a similar way to Elnur & Samir’s 2008 ‘Day After Day’, the solo mixes elements of opera and pop, and it finished a respectable twelfth. The onstage performance had two incredible dancers, which divided public opinion on whether they should be featured or not. Watch the video and decide for yourself.

Baku-born Samra Rahimli sang her heart out with perfect vocals in the Stockholm’s Eurovision final with ‘Miracle’. But, Azerbaijan failed to improve on their previous position, ending up seventeenth with just 117 points. One of Samra’s backing singers, Diana Hajiyeva, entered the following year’s competition in Kiev as DiHaj.

Diana Hajiyeva as DiHaj took the Eurovision by storm. The electro-ballad, with its provocative title ‘Skeletons’, gave a refreshingly different performance with a slightly dark twist. ‘Skeletons’ had a good reception and reached number 20 in the Swedish charts, but it only ranked fourteenth in the competition. The Azerbaijan Eurovision dream has failed to regain its initial momentum.

This year’s representative has been named: AISEL. Aysel Mammadova comes from a family of singers and is an expert vocalist, composer and pianist. The song has yet to be announced, but the 28-year-old’s background in jazz and soul is sure to generate a world-class performance. Only time will tell if the early Azerbaijan Eurovision success will resurface or if they’ll continue on the downhill trajectory. Portugal hosts 2018 Eurovision in May.