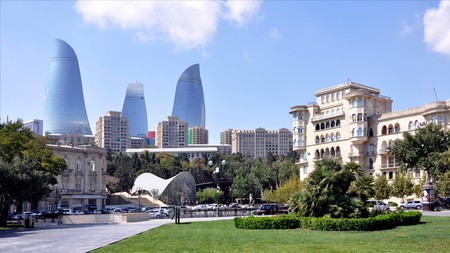 Perched on the shore of the Caspian Sea, Baku is the central hub of creative expression in Azerbaijan. Acclaimed contemporary artist Farid Rasulov gave Culture Trip the inside track on Baku’s art scene.

Azerbaijan has a rich artistic heritage: from ancient rock carvings dating from prehistoric times, to modern art galleries displaying the best of Caucasian traditions, the Land of Fire boasts a rich and diverse art scene.

The city of Baku, the Azerbaijani capital, hosts the majority of the country’s art collections and is home to numerous museums, galleries, and exhibition centres – covering paintings, carpet art and sculpture, to name a few – that acquaint visitors with the artistic heritage of the city.

Prominent local artist Farid Rasulov sat down with Culture Trip to unpack the local creative scene, and shed light on the key art spaces to visit on a trip to Baku.

“My journey into the art scene was a little bit of a surprise, even for me,” says Rasulov, who spent seven years studying at a medical university and working in various medical centres as a doctor. “I could not even imagine that this would flow into something like art,” he says.

Rasulov began discovering his artistic potential during a visit to the studio of Faiq Ahmed, a well-known Azerbaijani artist living in the same neighbourhood. “At his studio, I became acquainted with other artists who also played a crucial role in my artistic development, ushering me into the depths of conceptual art,” Rasulov explains. Rasulov has had his works showcased at numerous local and international exhibitions, including the 55th Venice Biennale in 2013, and is known for the diversity of his work: “I work in different media, such as installations, painting, three-dimensional graphics, video and music, using new ideas and materials every time.”

“The country’s unique location,” Rasulov explains, “as a gateway between the East and West, has allowed Azerbaijani artists to draw from the best creators of the two worlds, yet maintain a unique essence.” The geographical location of the country – with its rich flora and fauna, and the breathtaking peaks of the Caucasian mountain range – has fascinated and inspired many Azerbaijani artists. Additionally, influenced by political and societal frictions in the region, many artists have used their craft to confront social inequalities and political injustices of their times. “My favourite Azerbaijani artist working in this genre is Azim Azimzade,” says Rasulov. “His courageous view of life, and his collaboration with other artists and poets to create satirical graphics in Azerbaijan to bring to light the tragic realities of his time has always inspired me.”

“Another giant of Azerbaijani art history is Tahir Salahov,” Rasulov continues. Salahov is known for “severe style”, an expressive and bold style that emerged during the 1960s in the Soviet Union, in contrast to more subdued Stalinist-era paintings. Born in 1928, Salahov lost his father to the Stalinist repressions of the 1930s, leaving his mother to care for four children alone. Nevertheless, Salahov endured his tumultuous and war-stricken childhood years and entered the Azimzade Art College in Baku and later studied in Moscow. After graduation, his fame grew, with his trademark style becoming increasingly popular. “I love Tahir Salakhov, not only for his paintings but also for his organisational and teaching qualities,” says Rasulov. Salahov’s works can be viewed in the National Art Museum of Azerbaijan as well as in his House Museum in Baku.

Azimzade and Salahov (along with many others) have helped to cultivate a Baku where the arts can flourish, and the city now has a lively art scene that is continuously evolving under new generations of artists. Particularly noteworthy is the surge of a wide range of modern international art galleries showcasing works of both Azerbaijani and international artists. One such place is YARAT (meaning “create”) Contemporary Art Space. Located in a Soviet-era naval-ship maintenance base on the shore of the Caspian, this organisation has become the leading hub for artists not only from Azerbaijan, but also from the entire Caucasus and Central Asian region. “YARAT is always a good place to go to if you want to see interesting contemporary art in Baku,” says Rasulov. “It is an experimental location. You can see many different local and international artists’ solo displays here.” Seeking to nurture and promote contemporary art, YARAT has created a fruitful space for artists to display and develop their talent through courses and research. The organisation has two main branches, the YAY (share) Gallery and ARTIM (growth) Project Space.

In operation since 2012, YAY Gallery has become a draw for art lovers, who can view works by prominent Azerbaijani artists spanning several generations, diverse styles and genres. Celebrating the works of famed young artists such as Faiq Ahmed, Orkhan Huseynov, and Rasulov himself, to name a few, YAY Gallery has created a new venue for artists to share their passions with a broader audience, both local and international. To inspire Bakuvians, YAY Gallery has also been active in inviting well-known international artists to display their works.

The artists of YARAT are also future-oriented, initiating the ARTIM Project Space to inspire and support emerging local artists. Located in the Old City, ARTIM studio offers a variety of art programmes, providing a robust platform for artists to experiment with their art. For example, the ARTIM LAB project allows young creators to enrol in a year-long course, where they can dive deeper into various art theories, practices and strategies. “There are a lot of interesting young artists now, and I’m always glad to see even more like-minded people in Azerbaijani society,” says Rasulov.

Rasulov also recommends checking out the National Museum of Art, located across from the Azerbaijan State Philharmonic Hall. “This is a great place to visit if you want to have a more historical angle,” he says. The museum has an enormous collection of paintings, sculptures and other forms of art, dating from antiquity to modern times. “Another must-see place,” Rasulov suggests, “is the Heydar Aliyev Centre.” The unique architectural structure is a work of art in itself, notable for its fluid shape and elegant design. Inside you will find numerous exhibitions, including works of prominent Azerbaijani artists. “Gazelli Art House is another great gallery to see,” says Rasulov. “You can view various groups and solo shows of both local and international artists.”