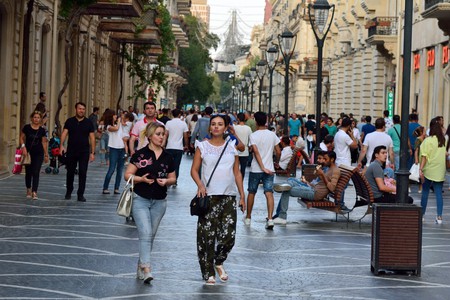 Most people in Azerbaijan can’t speak English, which means you’ll need to know a phrase or two if you want to get away from the touristy areas. Russian is the second language and speaking a few words will go a long way when travelling in the Caucasus and Eastern Europe.

Basic greetings from saying hello to expressing gratitude are essential phrases in any language. Here are the most important ones in Azerbaijani. 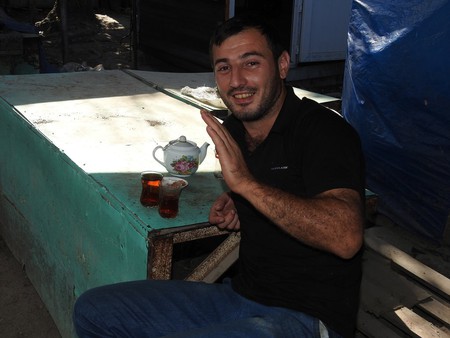 A friendly smile and wave from a local Azerbaijani | https://creativecommons.org/licenses/by/4.0/

Every Azerbaijani will use Salam as a greeting from meeting friends to getting a ticket at the bus station.

Informal ways to say yes and no. Or use the Russian Da or Nyet.

An informal way to say you’re welcome. You’ll hear this a lot after saying Sag ol.

What can be worse than not knowing tualet haradador when you need to use it really badly?

You may hear this as you’re asking for directions or guiding the taxi driver back to your Airbnb.

When combined with gestures, these are the most common phrases you’ll hear when asking for or giving directions.

Most likely, you’ll be travelling around Azerbaijan using the bus or train. Whether you’re taking the bus from Baku to Ganja or using the public bus to get to the capital’s Fire Temple, knowing how to ask will be a major advantage. 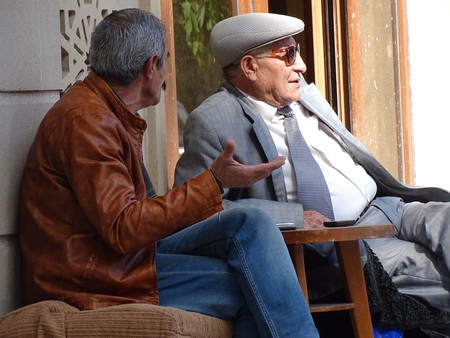 Locals are happy to help show you directions when in doubt | https://creativecommons.org/licenses/by-sa/4.0/

Food in Azerbaijan mixes Caucasus, Persian, Turkish, and Russian flavours. The local cuisine is delicious and telling your friends, host or waiter their food tastes dadlidir will make their day.

The most important word you can learn for the bar!

Always ask the price of something before buying. If you’re not confident with numbers, bring a pen and paper. Ask the vendor to write the price.

Knowing the basic numbers up to 10 will be useful in lots of situations from asking the price to trying to find out what time the bus leaves.

For 11 to 20, simply say 10 plus the number. For example, 17 is On yeddi. The same works for multiples of 10. Simply say the multiple followed by the single digit. 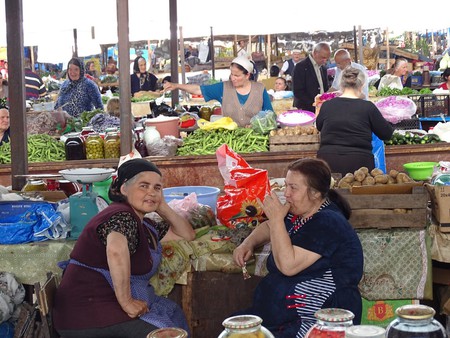 It's good to know how to ask the price in the local language | https://creativecommons.org/licenses/by-sa/4.0/

Azerbaijanis are some of the friendliest and most hospitable people in the world. And being a tourist in Baku, you’re likely to get curious looks. Meeting new people and making friends with a local is easy. Knowing how to ask their name should be a priority.

Remember to substitute my name, Sam, for yourself and add the dur at the end.

This one is self-explanatory.

Local people tend to be polite and well-mannered. You’ll almost always be asked how you’re doing if you know the person.

Good to know how to say the name of these languages. Russian is the lingua franca, English is slowly becoming more popular.

It’s good manners to ask in the local language if someone speaks English before diving into a conversation assuming they do. Most people outside the tourist industry won’t.

This phrases will be invaluable. When you’re dealing with someone speaking endless streams of Azerbaijani or Russian, give a blank look and say buna basa dusmurem.

Another important phrase to complement the one above. I can’t speak Russian is a good one to know. Most people in the tourist industry assume foreigners can speak Russian. 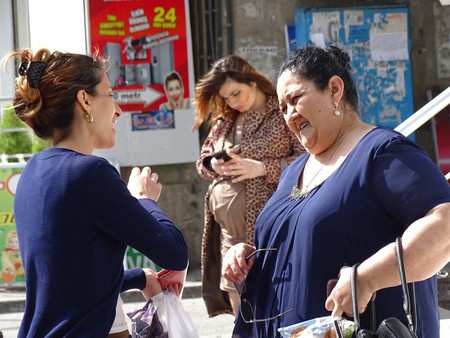 Learn how to ask if the locals can speak English. | https://creativecommons.org/licenses/by-sa/4.0/
Give us feedback