10 Azerbaijani Films You Need to Watch 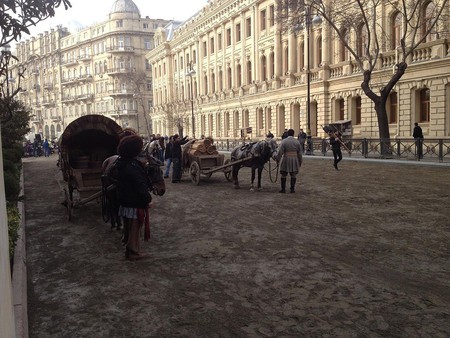 Several films hail from the Caucasus depicting complex situations, from rural life to events towards the end of the Soviet Union and forbidden love stories. Sharing similarities to Persian screenplays, these 10 Azerbaijani films offer a cultural insight into the way of life in a faraway place and a different era.

Based on the famous book, this Azerbaijani film follows the story of forbidden love. A boy from Baku falls in love with a girl from neighbouring Georgia. Challenges arise because the boy is Muslim while the girl is Christian. The drama follows their story in Baku during World War One and after Azerbaijan declared their independence from the Russian Empire in 1918. Despite being slightly Westernised, Ali and Nino offers an insight into what life was like in Baku a century ago.

Produced in 2017, the drama depicts the story of a farmer’s son who returns home after leaving his wife and son 12 years previously. The drama shows the emotional difficulties faced by the family living on a humble pomegranate farm when the son returns to bring his wife and child to Moscow. Watching this film gives the interested viewer an idea of rural life in Azerbaijan. Pomegranate Orchard was Azerbaijan’s entry at the Academy Awards for Best Foreign Language Film.

Towards the end of the 1990s, the Soviet Union began to crumble and lose influence and power in their republics. Corruption and decadence followed, descending into chaos. Vagif Mustafayev directed The Scoundrel, known locally as Yaramaz, to show the situation and challenges as the Soviets weakened through the eyes of a local Azerbaijani. Set in Baku towards the end of seven decades under communism, this film introduces viewers to the challenges of life before independence

Nabat is the heartbreaking story in Azeri of a woman living in the conflict-riddled Nagorno-Karabakh. She loses her son and husband and refuses to leave the village when the enemy starts to advance. After befriending a lone wolf with cubs, Nabat realises that both she and the animal are in the same dire situation. Sadly she dies in the first winter when Azerbaijan retakes the poverty-struck village. Director Elchin Musaoglu sheds light onto the sad reality many villagers faced living in the disputed region in the late 1980s.

The old Azerbaijani film was produced and screened in Soviet Azerbaijan. An Azerbaijani guerrilla goes to fight the Nazis in Yugoslavia and quickly becomes the most wanted. The war film continues to follow his life and sabotage attempts that helped the Russians win World War Two. With a slight hint of propaganda to portray Russian bravery, On Distant Shores offers a window into the minds and ways of thinking in post-War Soviet Azerbaijan.

O Olmasin, Bu Olsun is a remake of an earlier musical comedy composed in the 1900s. The stereotypical storyline involves a woman falling in love but being forced to marry someone else. The woman’s first lover concocts a plan to stop the wedding and tricks the second man into marrying his maid. From an outsider’s point of view, it’s challenging to understand or follow without subtitles. But persist and gain cultural insight into traditional clothes and styles of dancing.

The drama takes place in a poor mountain village and combines elements of friendship and tradition, giving viewers a taste of life in a rural Caucasus community. A young child, Buta, makes friends with an elderly man who teaches the boy important values and how to overcome hardship after his mother’s death. Buta also refers to a decorative pattern of a flower to symbolise life. The complex drama features love, betrayal and touches on specific concepts that arise in rural communities. Those with a keen eye will gain a lot from the camera work to understand village life.

The Day Passed might seem like another typical Azerbaijani film as the storyline follows an unsuccessful relationship, but it’s worth 90 minutes to watch. The romantic drama in Azeri takes place in Baku. While some viewers will find the storyline difficult to follow, the film gives a good overview into the ways of life and atmosphere in Baku under the Soviet Union. Movies from a bygone era are filmed through a different lens to the present day, which can provide intriguing historical and cultural insight.

A recent comedy follows a Turkish family who moves to Azerbaijan. Starting in Istanbul, the family get instructions to travel to Baku and complete a series of tasks with another Azerbaijani family to receive their inheritance. However, neither family can agree with each other, leading to various slapstick situations. Aside from the humour, this film shares the undertone that Shia Azerbaijanis and Sunni Turkish consider themselves to be brothers despite religious differences.

Nizami Ganjavi often ranks as the most famous and influential Azerbaijani of all time. The 12th-century poet often gets attributed for revolutionising Eastern poetry. The 1982 production depicts the poet’s life as a philosopher and poet living almost 1000 years ago in Ganja. Director Eldar Kuliev produces a masterpiece biography to shed light on the lifestyle and customs of Nizami.