Every year, more than 450 balls take place across Austria, with hundreds of thousands of people in attendance. The history of these gatherings dates back to the late 1800s, but while most balls have stayed much the same for the last century, a new era of more open-minded, inclusive balls has begun in Vienna.

Vienna’s ball season encompasses a huge diversity of different events, which range from the highly exclusive, such as the New Year’s Ball and the glamorous Opera Ball, to those that were set up to celebrate certain professions, including the Confectioners’ Ball, the Coffee Brewers’ Ball and even the Ball of the Viennese Chimney Sweeps. And now, one of the most established balls on the Viennese calendar is also one of the city’s most diverse: the Regenbogenball, or Rainbow Ball, which is dedicated to LGBTQ people and their friends. 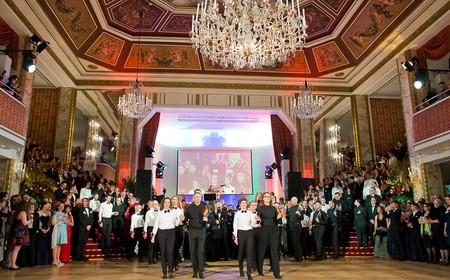 “People are very into the ball culture,” says Anna Szutt, general secretary and managing director of the Homosexual Initiative Vienna, or HOSI Wien, which organises the Regenbogenball every year. “They love it. It’s very popular. It’s something that’s on the news, something people are looking forward to.” Attending a ball in Vienna has been highly desirable for centuries, and this aspect of Viennese culture shows no sign of abating. As Anna says, “You can see the popularity with the prices for the tickets, which are quite high for some balls.”

“You have the balls of the Carinthians, the Styrians, the Polish, the Croatians,” says Kurt Krickler, one of the founding members of HOSI Wien. “The balls are not only in Vienna, they’re in the whole of Austria.” Today, people come from across the globe to attend one of the country’s celebrated balls. As Krickler says, “There’s a tourist aspect now, too.” 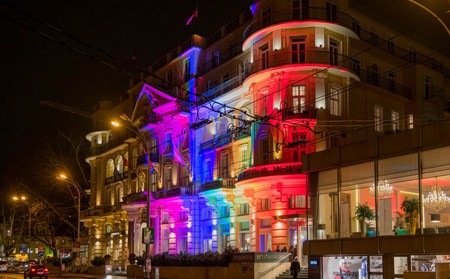 The now-famous Viennese waltz, which initially shocked the public by the amount of contact that it required between partners, eventually became an integral aspect of Austrian balls, and still is today. Krickler explains that the traditional dances that characterise Austria’s balls are one of their main draws: “Many people come for the dancing season.”

Yet join in on any one of Vienna’s varied balls and one thing remains the same: the balls are traditional and conservative, with dancers adhering to ballroom etiquette. There’s a strict dress code – usually black tie for men, and long dresses with opera-length gloves for women – and formal dancing between male and female partners. It is no wonder then, that the LGBTQ community was in need of a ball of its own. Step up the Regenbogenball, which first took place in 1998 and has occurred annually ever since.

In 2003, HOSI Wien took over the Rainbow Parade for Vienna Pride, assuming responsibility for the organisation of the Regenbogenball shortly after. “It was a big success,” Krickler says, explaining that the ball has enjoyed support from various politicians and personalities over the years, including Eurovision favourite Conchita Wurst, and the current secretary of cultural affairs for Austria, Ulrike Lunacek. 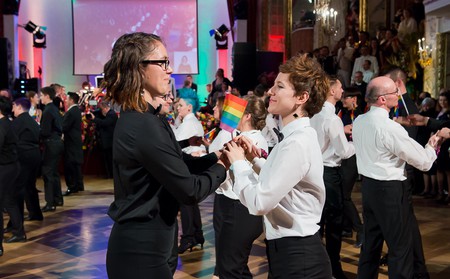 “We were looking for funding opportunities and wanted to create a great ball for the LGBTQ community,” Szutt explains. All of the profits from the Rainbow Ball now go towards funding HOSI Wien initiatives, such as a community centre and political advocacy. “Our main source of income is the Rainbow Ball. That’s how we fund ourselves through the year. This is the biggest fundraising event we do.”

The Regenbogenball takes place during peak ball season in January, and is a classic ball, with waltzing throughout the evening, the Polonaise dance for the opening, a midnight quadrille (a French dance) and a strict dress code. But the Rainbow Ball dress code disregards gender – so yes, you should wear black tie or a ball gown, but the choice is yours. Whether you’re a man, a woman or identify as neither, either a ball gown or black tie look is yours to own. 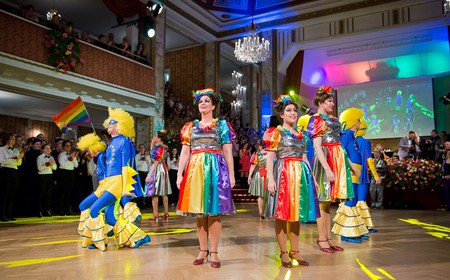 The Rainbow Ball dress code is not restricted by gender | © leadersnet.at / H. Auer

The 2020 programme at the Regenbogenball featured a performance from the Iconic House of St Laurent, a vogueing dance group; a cabaret performance by the Gorgeous Ladies; and an ensemble performance by the women’s band Johann Strauss. There is also a disco downstairs and a casino that opens a couple of hours before midnight.

The ticket sales alone demonstrate the need for an inclusive ball of this kind. Every year, Regenbogenball sells out. In 2020, it took place at the Parkhotel Schönbrunn, with reduced-price tickets for students, pensioners and those on welfare. About 1,500 people attend the ball annually. One of the guests this year was Cherry T Joystick, a drag queen in Vienna who has attended the ball four times. 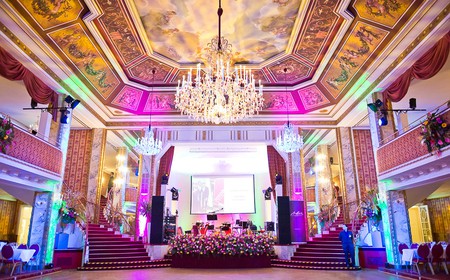 That it sells out every year demonstrates the need for the Rainbow Ball | © leadersnet.at / H. Auer

“The Viennese ball culture is very special, but also very traditional, old-school and therefore conservative, which means that the big balls of the season mainly attract a rather elite, wealthy and clearly heterosexual group of people,” Cherry T Joystick explains, drawing the example of a recent kerfuffle over a same-sex couple participating in the opening debutant dance for the first time ever at the Opera Ball, one of the city’s best known balls. “Other balls are traditionally mainly hetero, cisgendered places,” Szutt concurs. “If you dance or go there as a gay or lesbian couple, people stare at you.”

“At the Regenbogenball, things are a lot more diverse,” Cherry T Joystick explains. “It’s all about providing a classical Viennese ball, but open for all gender identities and sexual orientations. Everyone comes in their favourite evening gowns, suits and smoking tuxedos, and it doesn’t matter who is wearing the dress or the smoking tuxedo, and you see same-sex couples waltzing through the halls.”

Lydia Novak, who went to the Regenbogenball for the third time in 2020, fondly remembers dancing for five hours straight at a previous ball, and enjoys the mixing of elements at the ball. “I feel like the Regenbogenball is a mix of the best parts of the classic Viennese ball tradition and LGBTQ culture,” Novak says. “It’s classy and fancy but also very inclusive, diverse, a lot of fun and laid-back.” 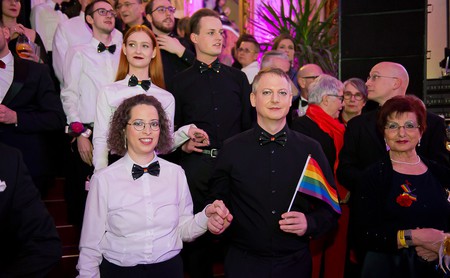 Regenbogenball is a mix of the classic Viennese ball tradition and LGBTQ culture | © leadersnet.at / H. Auer

But today, the Regenbogenball isn’t the only inclusive ball in Vienna. “There’s a Diversity Ball that’s fully accessible for people with disabilities, and is for everyone,” explains Krickler (in 2020, the Diversity Ball will take place in May). “And the Rosen Ball. For that you have to really dress up and show off in your outfit. You have to put some fantasy into your outfit.” The Rosen Ball is another LGBTQ ball, meaning that today, there are more opportunities for same-sex couples looking to attend one of Vienna’s balls than ever before. “There’s quite a range of LGBTQ-friendly balls to go to,” Krickler concludes.

The popularity of Regenbogenball can be seen as an important marker of the advancement of LGBTQ rights in Austria, and a reminder of Vienna’s flourishing LGBTQ community. Novak sees the coming together of different aspects of Viennese society as a major strength. “Not only is it a big part of LGBTQ visibility in Vienna, it also shows that tradition and classical culture and the LGBTQ community and culture are not mutually exclusive.”