Viennese Actionism: Between Experiment And Destruction

Created as a reaction against National Socialism, Viennese Actionism is a visceral art movement that was born in Austria during the 1960s. We take a look at the conception of this avant-garde movement; its significance within the scope of art history; and its grip in controversial political debate.

Viennese Actionism is a school of radical performance art that sought to nullify and loosen the grip of the bourgeois conventions of the post-war years. As a result, the movement has become a subject of great contemporary interest and agitated art historical debate. The Wiener Gruppe (Friedrich Achleitner, Konrad Bayer and Oswalk Wiener) were predecessors of this art movement, a small group of avant-garde Austrian poets and writers whose interests branched to Baroque literature, Dadaism, Surrealism and Expressionism. The linguistic awareness of the Wiener Gruppe, and their implementation of language into visual and acoustic material in collages, prepared the foundation for the Viennese actionists to flourish. 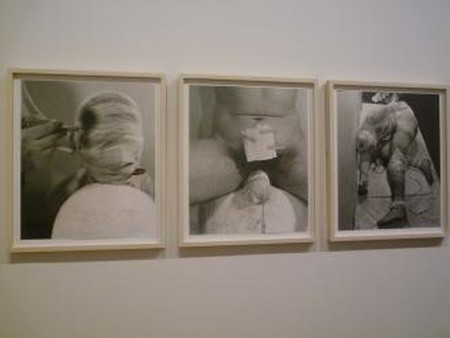 The movement has become legendary for its extreme violence of expression within the canon of art history and performance art. Respectively, Günther Brus, Otto Muehl, Hermann Nitsch and Rudolf Schwarzkogler are some of the most pronounced and active participators of this genre of art. Such artists share an affinity with action painters, like Jackson Pollock, and body artists, such as Chris Burden. Brus’ first performance Ana (1964) led to a series of paintings including Aktion, Self-painting 1: Painting by Hand and finally Painting by Head. By 1966, Brus had begun to collaborate with Muehl on a series of performances. Meuhl addressed his sentiment for post-war Austria by pushing himself through various physical and mental extremes. Several of his performances include Selbstbemalung (1965) and Kunst and Revolution (1968). Art and Revolution was a performance that tabloids marked as a ‘University Obscenity’. A combination of nudity, masturbation, mutilation and the gross smearing of excrement ensued.

Sharing distaste for the horror of National Socialism in Austria during the period of the 1960s, artists used art as a tool for social negotiation at a time when politics was viewed as sensitive and controversial. The retention of traumatic experiences of the war and the restrictive political and cultural climate within this period, eventually led to the booming growth of the Austrian art scene. Such a blossoming of art preceded the establishment of an extreme art form created from a disillusionment felt by Austrian society. The movement points to cross-references with international developments and politics. It soon became evident that not only was the art abreast of current discourse, but the extremism expressed in it stressed the significance of a raw and uncompromising aesthetic. This aesthetic departed from traditionalism, far-fetched from the conventional realm of object-based practices, which at the time other artists had been operating in.

By consensus, the human body became established as an integral part of the art-making, art-action process: blood, sweat and excrement included. The combination of grotesque sexual humor and catharsis in their performances testified to the shocking nature of the works made by action artists. Others, such as Kurt Kren, Peter Weibel and Ernst Schmidt Jr., recognized that video and film could be used to critique the repressive aspects of language and mass media. Some of the most palpable films include Hermann Nitsch’s Orgiastic Mystery Theater commissioned by the Essl Museum and a video compendium by Günter Brus. 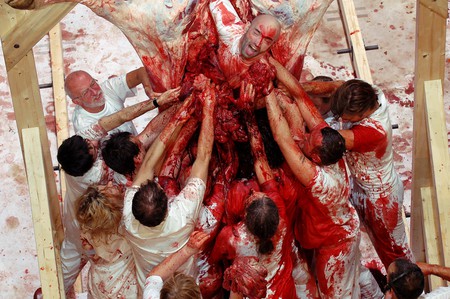 Since the 1980s, Viennese Actionism has become internationally established as one of Austria’s most valued contributions to the avant-garde. Some of the most recent exhibitions of Viennese Actionism include Viennese Actionism: The Opposite Pole Of Society at the Museum Of Contemporary Art Krakow (MOCAK). This exhibition held particular poignancy as it was set in a new building that shared the same site as the historic Schindler’s Factory. The exhibition represented a part of Austria’s official cultural heritage and was presented under the patronage of the Ministry Of Foreign Affairs and the Austrian General Consulate in Krakow. Curated by Stanislaw Ruksza, the exhibition assimilated works from the Essl Collection. All 259 works came from the private collection of Karlheinz and Agnes Essl, and was one of the first exhibitions showcasing a complete and comprehensive collection of works from this genre, including action photos from Rudolf Schwarzkogler and Günter Brus’ Bilddichtungen.

Set against the backdrop of social and political transformations during the 1960s, the sentiment of the Actionism movement cannot be understood without evaluating the socio-cultural context of its time. Artists concerned themselves with deep-rooted emotions, reflected by the heavy, restrictive and conservative spirit of a post-war Austria. Not only did Viennese Actionism create a stir within the art world but it also penetrated the Austrian justice system due to many ‘sensational’ scandals ensuing between both Action artists and the law. For these reasons, its dynamic departure from Traditionalism makes Viennese Actionism an interesting case study, both in the field of art and within the spectacle of contemporary society.