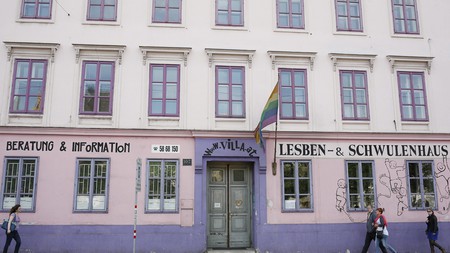 Sporting a bright pink and purple façade with a large rainbow flag at the entrance, the three-storey Türkis Rosa Lila Villa at Linke Wienzeile 102 in Vienna’s 6th district, just a few minutes’ walk from some of the city’s most popular queer bars and nightclubs, has become a distinctive landmark in the city. Today, it hosts talks, social events and more for the city’s LGBTQ community, but it hasn’t been an easy journey.

It all started with a naked protest and a squat

Vienna has long been a place of refuge for the Austrian queer community, having been home to LGBTQ nobles and artists from around Austria and beyond for decades. Many relocated in the 1960s from smaller towns, attracted by the capital’s anonymity as well as its flourishing queer and creative scene.

Vienna now has a thriving LGBTQ culture, and the city’s long history of squatting had a big role to play in the early campaign for LGBTQ rights in Vienna. In the 1970s and 1980s, left-wing activists started taking over buildings all around town, protesting against social injustice, housing shortages and unemployment as well as the government’s handling of these issues. Cultural institutions such as Arena Wien (now a popular live gig venue) and WUK (an institution for music, dance and the arts) rose to fame thanks to activist movements. At the same time, those within the queer scene started to publicly raise their voices and fight for their rights. One of the most memorable actions of this movement was a nude protest for gay rights on the eve of 1982, when the puzzled viewers of Vienna’s prestigious New Year’s Concert saw two naked men take to the stage. By April that year, the first LGBTQ activist had moved in to squat at Linke Wienzeile 102, and many now draw a direct line from the New Year’s protest to the start of Vienna’s famous squat.

Soon, more people had moved into Linke Wienzeile 102, but while these activists were simply seen by many as a squatting group at first, their openly queer lifestyle, radical protest actions and huge entrance painted with the German words for the “first building for lesbians and gays” were greeted with raised eyebrows – and even open hate – by many of the more conservative locals. “The Türkis Rosa Lila Villa started out as a radical movement, irritating many of the establishment. Verbal insults and death threats were on the daily agenda, while the media called out politicians to shut down the place,” says New York-born Denise Van De Cruze, who runs today’s in-house community café, Villa Vida.

Later in 1982, after long and tough negotiations with the local authorities, the LGBTQ activists were eventually granted permission to turn the squatted building into a community centre, on the condition that they’d renovate it out of their own pockets and provide an information centre both for residents and the city’s queer community. The Türkis Rosa Lila Villa officially opened on 15 November 1982. From then on, it’s grown into a prominent symbol of LGBTQ Vienna. “Türkis Rosa Lila Villa has been the key institution for queer activists in Vienna ever since 1982, offering everything from hands-on practical advice for members of the community to events, talks, workshops, and parties,” explains drag queen Tiefe Kümmernis, a dazzling star in Austria’s LGBTQ scene as well as a regular at the Villa. However, it took another 15 years until homosexual clubs and societies were legally allowed to be formed in Austria, although some avoided the issue by positioning their associations as initiatives or community centres. In 1984, the Villa acquired permission to legally stay for another 30 years, an agreement that has recently been extended.

The name and multicoloured appearance of the volunteer-run hotspot have a particular symbolism: “Rosa” or pink for the now universal colour of the queer community (a colour that has been reclaimed by the LGBTQ community since the Nazis forced people they’d identified as gay to wear inverted pink triangles); “Lila” or purple for the feminist movement in the 1970s; and “Türkis” or turquoise for the trans community. Today, the Villa houses an information centre, three flat shares, an LGBTQ library and a popular café hosting frequent community events, whose patio is often packed in the summer months. It also runs regular information sessions for those who identify as gay, lesbian, bisexual, trans and intersex, as well as queer refugees. And there’s plenty of social events too, from talks to parties, karaoke nights, queer yoga, speed-dating, poetry slams and the legendary Queens Brunch on Sundays, where you can enjoy a bottomless buffet while watching drag queen performances.

Inside the Türkis Rosa Lila Villa there’s a welcoming, cosy vibe. There are colourful flyers and posters on the tables and the walls, advertising queer clubs in Vienna, LGBTQ film screenings, and the Villa’s latest party bash. Couples cuddle up, others just chat over food and coffee, and newcomers are greeted fondly. “Everybody is welcome at the Villa. Unlike other queer institutions in the city, this place is not explicitly sexual. It’s all about community, which is rare but vital for the scene,” says Denise, who describes the Türkis Rosa Lila Villa as “a safe place for people that don’t have a safe place, a very important institution for LGBTQ people and everyone interested in queer issues and activities, from high school kids who want to learn more about the scene to long-term regulars.” A young college student perfectly fits the bill, and tells Culture Trip while sipping his tea: “I was the only gay guy in my countryside hometown. While my family has always been supportive, there was a lot of gossiping going on. Only when I moved to Vienna and first came to the Villa did I feel like I finally belonged somewhere and could be myself.”

Nowadays, Vienna’s LGBTQ community is flourishing, with many popular LGBTQ bars and clubs and increasingly inclusive balls, while the annual Vienna Pride Parade is one of the biggest in Europe. But few at the Türkis Rosa Lila Villa believe that the battle for equal rights has already been won.

“We still find the occasional homophobic slogan on the wall in the mornings, and in the worst-case there’s open death threats against LGBTQ people,” admits Céline Balbons from Queer Base, a supportive community for gay refugees that hosts regular information sessions, legal consultation and events at the Villa. Just like in the old squatting days, however, the LGBTQ community is ready to fight back and stand up for their rights. “What I love about the Villa is its visibility thanks to the pink facade,” says Céline. “It’s a very positive and important sign, especially for people that are new in town, the country and maybe also new to the queer scene. It shows that we are here, we will stay, and we are not afraid.”

Visitors, queer or not, are welcome to drop in any time and check out the Villa for themselves. “At the end of the day, we are all one big family,” says Denise, sharing a fun story from a recent school group visit: “They came to learn more about the LGBTQ community and ended up spontaneously joining in with a karaoke event. There was food and drinks, dancing and lots of laughs. That’s the Villa spirit at its best!”