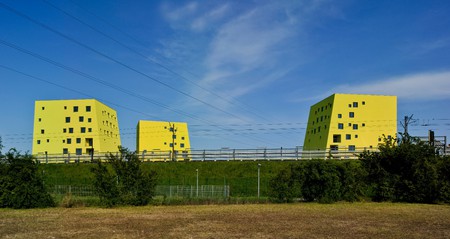 The 23rd district of Vienna is a juxtaposition of jagged, sprawling estates, monopolised by shopping malls and encircled by wide lanes of rushing traffic and vast stretches of seemingly barren lands. The addition of the Zitronengelbe Häuser, a recently erected housing complex comprising 115 residential units, encourages vitality to this formerly sparse space.

The triangular land that stood before the conception of the Zitronengelbe Häuser (Lemon building) was not an ideal plot for building upon; located out in limbo on the outskirts of the city, dominated by heavy rivers of traffic, and crossed by a middle-tension power line. Nonetheless, the architects behind the design saw great hope resting in the site, stating it as ‘not just a real estate opportunity, but an opportunity to generate new life in a neighborhood placed in the periphery of the city without a clear representative image.’ 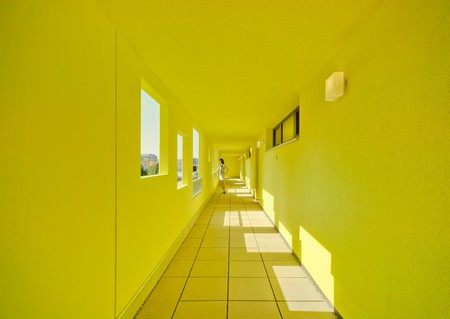 With the U-Bahn line 6 in plain view, a route that shoots directly into the heart of the city, the chance was presented to attract commuters to the community. Furthermore, the space surrounding the site, delightfully void of clutter, made for some attractive views of the city, visible from the higher floors of the building.

The project, known as ‘Fallow Land,’ was a collaboration between PLAYstudio and YES studio, in cooperation with the engineering firm Dr. Ronald Mischek ZT GmbH, and work started on site in 2003. Their vision was inspired by the designs of rural farmyards that run circumambient around Vienna, an atmosphere that is further reflected in the vivid citrus-coloured façades.

PLAYstudio and YES studio specialise in producing environmentally sustainable and culturally beneficial buildings, with many of their previous projects including award-winning exploits in Norway, Austria and Spain. PLAYstudio also run a side project called More Than Green, which raises awareness on social, economic and cultural sustainability within urban environments.

The finished project sees striking lemon-coloured walls pop out – pleasingly not in keeping with the muted colours that dominate the neighbouring landscape – radiating a kind of optimism. The complex appears at its most attractive when set against a blue sky, making the apartments become reminiscent of somewhere not as landlocked as Vienna; hinting to sun-splashed Mediterranean coastal villages. 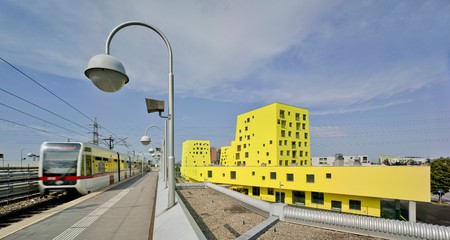 The success of the project has been dutifully recognised, with PLAYstudio and YES studio being granted first prize in the Europan 7 Housing awards.