The Top 10 Things To See And Do In Lend, Graz 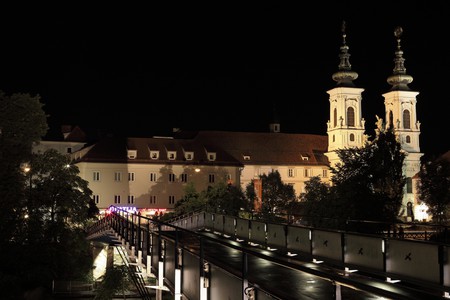 Lend, a municipality of Graz, Austria, is considered a Murvorstadt (old city) working-class neighborhood. Once ignored by tourists, recent gentrification efforts by the city have helped Lend come into its own. Today, this district stands as a testament to the beauty that emerges when the past and present collide.

Perched atop Austein Hill near the Mur River on the border of Lend, the Grazer Kalvarianberg (Calvary) offers fabulous views of the city for those willing to make the trek to the top. Modeled on the Golgotha in Jerusalem, this 17th-century replica of the Crucifixion site has been a religious pilgrimage destination for several hundred years. At the hill’s summit are three crosses; one for a golden Jesus, flanked by two criminals. Visitors can also check out the numerous chapels and a Baroque-style church, the Kalvarienbergkirche.

Built in 2003 as part of the European Capital of Culture, the Kunsthaus Graz is both an architectural landmark and museum specializing in contemporary art of the last 40 years. A suburban example of so-called ‘blob architecture‘, this quirky building definitely sticks out amongst the Baroque-style buildings that surround it. That said, it still integrates an 1847 iron house as its entrance, making it a true blend of the old and the new. With no permanent collections, the art on display inside changes as often as the luminescent skin of the building itself.

Like the Grazer Kalvarienberg, Mariahilferkirche is another Christian pilgrimage site in the Lend district. An order of Franciscan monks, whose contemporaries now inhabit the monastery attached to the church, first arrived in Graz in the 13th century. However, they didn’t settle in their current location until the early 17th century. Giovanni Pietro de Pomis, a student of Tintoretto, designed and oversaw construction of the original structure between 1607 and 1611. The church visitors recognize today was realized in the 1740s after a renovation by Josef Hueber. Although the interior of the church is simple, pilgrims and tourists alike can enjoy the beautiful stucco and marble work all done in the High Baroque style of the mid-17th century.

The Mur River divides the city of Graz in half, and was once a critical lifeline to its existence. Once faster technology replaced river transport, the Mur lost much of its charm. Luckily, when Graz was crowned the Cultural Capital of Europe in 2003, the city commemorated the achievement with Murinsel, a floating platform of steel and glass in the shape of a seashell designed by New York-based artist Vito Acconci. Connected by two bridges to each bank, Mursinel entertains visitors with a café, a playground, and various other events held periodically under its vaulted glass roof.

If a traditional Austrian meal and a cold brew is what you crave, head over to Gasthaus zur Alten Press, located smack bang in the heart of the Lend district. Fittingly, this old-style Austrian eatery inhabits a 17th-century mansion, so your surroundings will be just as genuine as the food on your plate. Reasonably priced Styrian classics like Weiner schnitzel, goulash and zwetschkenröster (plum compote) with yogurt all make an appearance on the menu and if the weather is nice, patrons can sit al fresco on the terrace.

Located in Lendplatz, the Bauernmarkt is one of over a dozen farmers markets that spring up regularly within the Graz city limits. Although some type of open-air market has been held in the Lendplatz since at least the 18th century, a true farmers’ market wasn’t established here until 1945. Open daily from 6am to 1pm, visitors lucky enough to have access to a kitchen can stock up on fresh local produce, meat, cheese, bread and much more. Just remember to plan ahead: The Bauernmarkt is closed on Sunday.

Originally established in 1899, the Grazer Orpheum is one of the city’s oldest theatrical venues. After the original theatre was destroyed during the Second World War, a new structure marked its resurrection in 1950. After several role transformations in the 1960s and 1970s, the Grazer Orpheum became associated with the Cultural Department of the City of Graz in the 1990s. The theatre currently offers visitors a wide variety of programs suitable for all ages, including children’s theatre, cabaret, jazz, rock, and pop concerts.

Sometimes, the best way to see and experience and new city is simply to walk around. Luckily, The Graz Tourism Office offers Lendwalk, a guided culinary tour around the Lend district that shows those new to the city the hippest places to eat and drink off-the-beaten-path. It’s an ideal opportunity to actually discover where and what locals like to eat in their own neighborhood. The tour, which includes four stops and originates at the Franciscan Monastery (Franziskanerkloster), lasts two hours and costs €29 per person. Tickets are available for purchase online.

Located in Lendplatz in the heart of the Lend district, Die Süße Luise (My Sweet Luise) is the perfect place to grab a cup of coffee and a pastry to fuel up for a long day of exploring Graz. The café features freshly-baked, indulgent edibles such as cupcakes, tarts, cookies, as well as quiche and sandwiches for those looking for something a bit more on the savory side. Due to its prime location next to the Bauernmarkt, all produce used in the cafe is not only incredibly fresh, but also supports local farmers.

For visitors looking for little bit more adventure, taking a Murtour is the perfect way to spice up your exploration of the Lend district, and of Graz itself. For one and a half hours, participants drift down the Mur in inflatable rafts and experience a combination of sensations that no other tour could possibly offer. Besides seeing Graz from a completely new angle, participants also witness the often forgotten idyllic natural landscape that still exists along the river, and get their adrenaline pumping while riding the Mur’s occasional rapids.