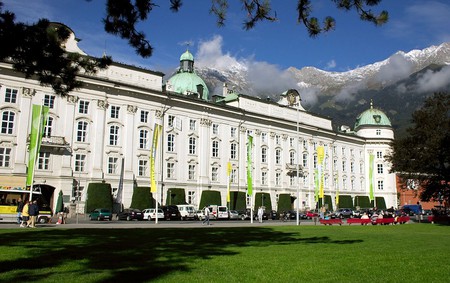 Innsbruck’s Old Town offers a retreat from the present day. Christmas markets can be found during the winter season, while Innsbruck also glows in the summer, with beautiful sites such as the famous Golden Roof and Tyrolean houses. The Culture Trip brings you the things every traveller should see when in this gorgeous, immersive neighborhood.

One of the most significant palaces in all of Austria, the Imperial Palace, or Hofburg, is a former Hapsburg palace built in the 16th century. It later became a Renaissance and Baroque imperial palace and is open for tours today, each lasting at least 45 minutes. While the exquisite exterior is attributed to Empress Maria Theresa, the interior is just as impressive, with 20 rooms filled with frescoes and murals. The imperial apartments, the Gothic Hall, and the palace courtyard will make visitors feel as if they are royalty while strolling through the building. In the historic Altstadt area of Innsbruck, Tiroler Landestheater Innsbruck hosts plays, operas and musicals. After a theater company in the 1840s raised donations to open the building in 1846 the institution flourished, going on to be renamed Tiroler Landestheater in 1945. Today, the main theatre offers seating for 800 and the basement theatre fits 250 more. To get a real taste of Austrian culture, take a seat in this traditional, folksy setting and enjoy a ballet or orchestral performance.

While visitors can easily walk through Innsbruck’s Old Town to get a feel of its history, the City Museum explains Innsbruck’s local history in great detail. The site’s permanent exhibition and alternating special exhibitions take guests through Tyrolean art, medieval documents, lordly residences, and up to urban development and tourism today. Specifically, the permanent exhibition illustrates the town history of Innsbruck and the evolution of the Tyrolean capital starting in the late 12th and early 13th centuries and running to the Olympic Winter Games of 1976.

After leaving the City Museum, climb up to the Tirol Panorama for one of the best views of the city going. By walking along the 2.2 kilometer Panorama Loop Trail, visitors receive a panoramic view of Innsbruck and breathtaking sights of the Nordkette mountains to boot. Through an underground passage, guests can head over to the Kaiserjäger Museum to learn more about Tirol’s military history during the 19th and 20th centuries. Back at the Tirol Panorama lies the 360-degree wall painting of the struggle for freedom of August 13, 1809, coupled with multiple exhibitions that detail regional religion, art and architecture.

After a dose of regional history, the Sillpark offers shopping choices and boutiques. Gift shops can be expensive and travelers often forget to pack that extra pair of socks, so Sillpark is the ideal place to get last minute souvenirs, forgotten items or to simply do some shopping like they would at home. Sillpark contains typical retail stores, along with Dutch, Swedish, and Austrian retailers and a collection of eateries to boot.

Triumphpforte is another one of Innsbruck’s famous sights, located at the end of Maria-Theresien Strasse. After the Triumphal Arch was built in 1765 in Roman architecture styles, Maria Theresa planned to personalize it in celebration of Leopold II’s marriage to princess Maria Ludovica of Spain. However, Kaiser Franz I, Empress Maria Theresa’s husband, died during wedding festivities, and part of the Triumphal Arch is dedicated to the passing of her husband; the north side of the arch is dedicated to the mourning of Kaiser Franz I while the southern face celebrates the marriage.

Across from the Golden Roof, Helblinghaus has a rich history starting in the 15th century. It began with Gothic styling and a Baroque facade, then transformed in the 18th century with Rococo decorations. To better capture light, the Rococo ornaments of bows, masks, sculptures, shells, and other trinkets were added. Although Helblinghaus was finished in 1732 by Anton Gigl, the building was named after Sebastian Helbling, who owned it between 1800 and 1827.

The Cathedral of Saint James was constructed in the 18th century as a Baroque edifice. The cathedral has since been rebuilt twice: once between 1717 and 1724 by Johann Jakob Herkommer and the second time after sustaining damage during World War II. Luckily, the cathedral has been restored with a Baroque interior and two large dome towers. Within, travellers will find an exquisite altarpiece named Maria Hilf, Mary of Succor, and other worthy pieces that honor Archduke Maximilian III.
Cathedral of Saint James, Domplatz 6, Innsbruck, Austria