The Top 10 Things To See And Do In Hallstatt, Austria

Hallstatt, Austria | © Pawel Kazmierczak / Shutterstock
Until the 19th century the beautiful Austrian town of Hallstatt, which overlooks Lake Hallstatt, was accessible only by boat or mountain trail. Today it is a popular tourist destination a UNESCO World Heritage Site, as well as a functioning lakeside town with almost 800 residents. With this guide as your companion, you will experience the most exciting attractions in this beautiful city and its surroundings.

Church
Kalvarienberg Church | © trabantos/Shutterstock
This church was built in the year 1711 and was donated to the town by a childless married couple of court secretaries. It is located on the Kalvarienberg, which is a nearby mountain with an impressive view over Hallstatt, its lake and surroundings. This church was built in order to offer a place for the inhabitants of the town to pray, and as the final resting place of the married couple. This church is a true masterpiece of baroque architecture.
More Info
Open In Google Maps
36 Lauffen, Oberösterreich, 4821, Austria
View menu
Visit website
Visit Facebook page
Send an Email
Give us feedback

The Market Square is located in the city center of Hallstatt and is the major attraction there. The Market Square has a statue of the Holy Trinity and is surrounded by beautiful buildings. Visitors will find restaurants, cafes, hotels, a bar and a range of souvenir shops. Throughout the year there are different events, like the traditional Corpus Christi procession in spring, various concerts, and the Christmas market in winter. 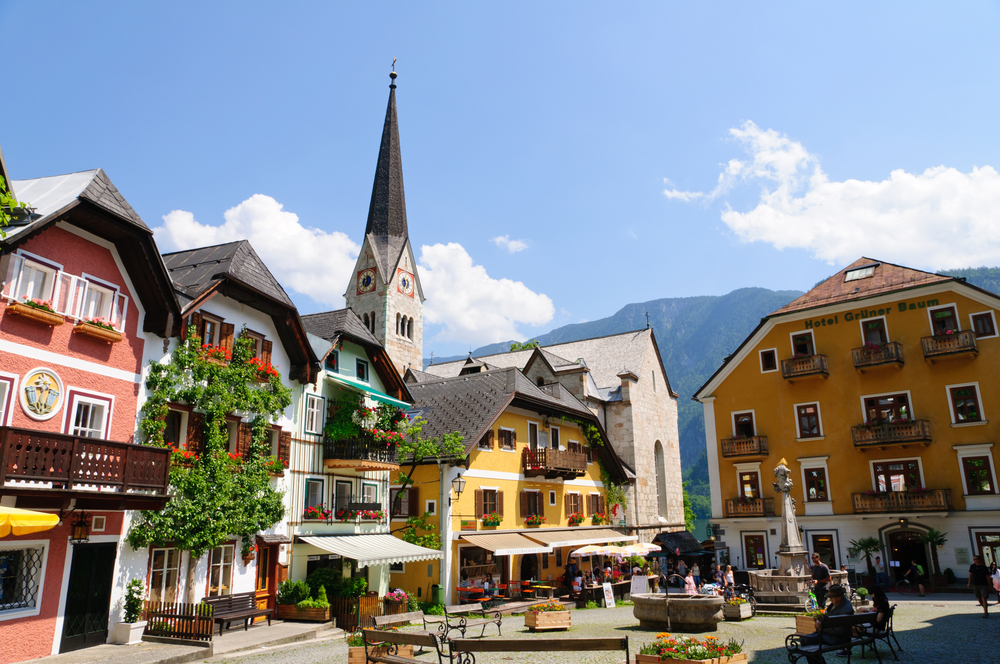 Several significant archaeological artifacts were discovered by pure chance in Hallstatt during the construction of a boiler room under a sports shop. It is possible to see this find during the opening hours of the shop for free. Indeed, thousands of important discoveries have been made around Hallstatt, including nearly 2,000 graves from the late Bronze Age and early Iron Age and the prehistoric salt mines. Such was the quality of these discoveries that the term ‘Hallstatt’ is now used to describe the predominant Central European culture in the early Iron Age.

Museum
The Museum was opened in 1888 in order to showcase the special archaeological finds of Hallstatt, which were discovered in the preceding years. Visitors can learn everything about the history of this beautiful place in the museum, starting with the Stone Age and traveling through thousands of years of history right up to the present. Exhibited here are the discoveries from the local salt mines (the oldest in the world), and the Iron Age burial grounds and cemeteries nearby.
More Info
Open In Google Maps
56 Seestraße, Hallstatt, Oberösterreich, 4830, Austria
+436134828015
View menu
Visit website
Visit Facebook page
Send an Email
Give us feedback

The Charnel House in Michael’s Chapel

The charnel house in Hallstatt had been in existence since the 12th century and contains 1,200 skulls. It is located in the two-story Michael’s Chapel, built in a baroque style. 610 of the skulls are painted, inscribed with the death date and arranged by family. This tradition started in 1720, when there was no more room at the cemetery and no possibility of extending it. 10 to 15 years after the funerals, skulls and big tubular bones were taken from the graves to dry and clean them and paint afterwards, mostly with flowers as graves are also decorated with wreaths of flowers. 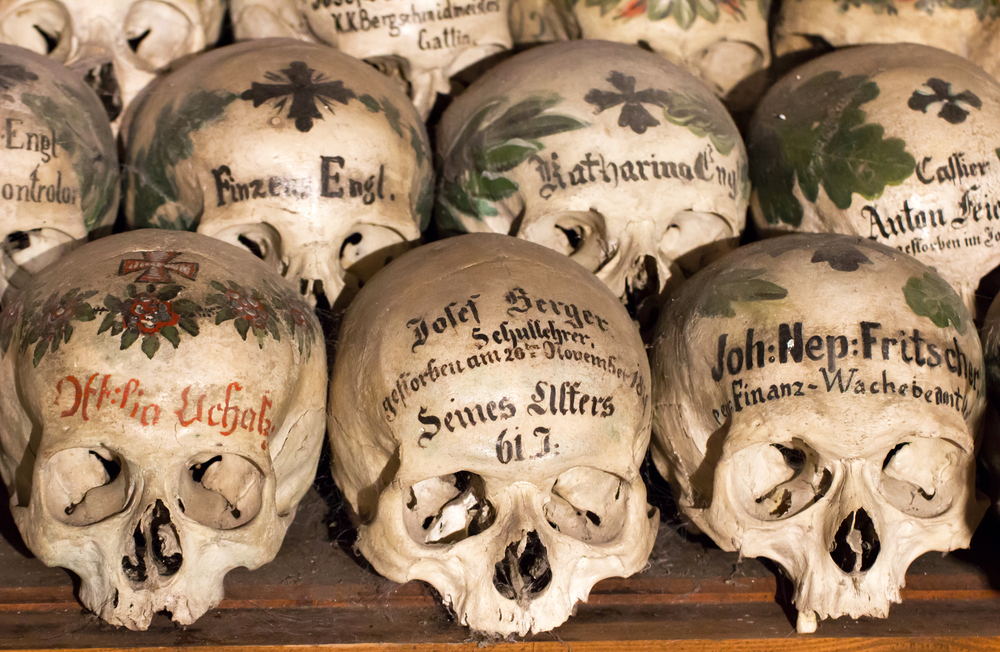 Decorated Skulls in a Bone House of Hallstatt, Austria | © corlaffra/Shutterstock

There are some clues which tell us that the Hallstatt Salt Mine was already active in the 15th century, making it the oldest in the world. The salt mine was used until modern times, and for over 300 years (from 1600 to 1960) it was the most important location for mining in the region. Eventually, the Hallstatt Salt Mine became a tourist site which shows the history of mining and the life of the miners.

In 1782, Emperor Josef II adopted the Patent of Tolerance, which contributed to the free exercise of religion in the Austro-Hungarian Empire. Since this time, there have been many Protestant residents in Hallstatt. As the Protestants did not have a church of their own, they built a prayer house in the 18th century, without a church tower or bells. About 60 years later the parish then built a beautiful rectory with a church tower and bells. This building is the beautiful, much-photographed Church of Christ we know today. 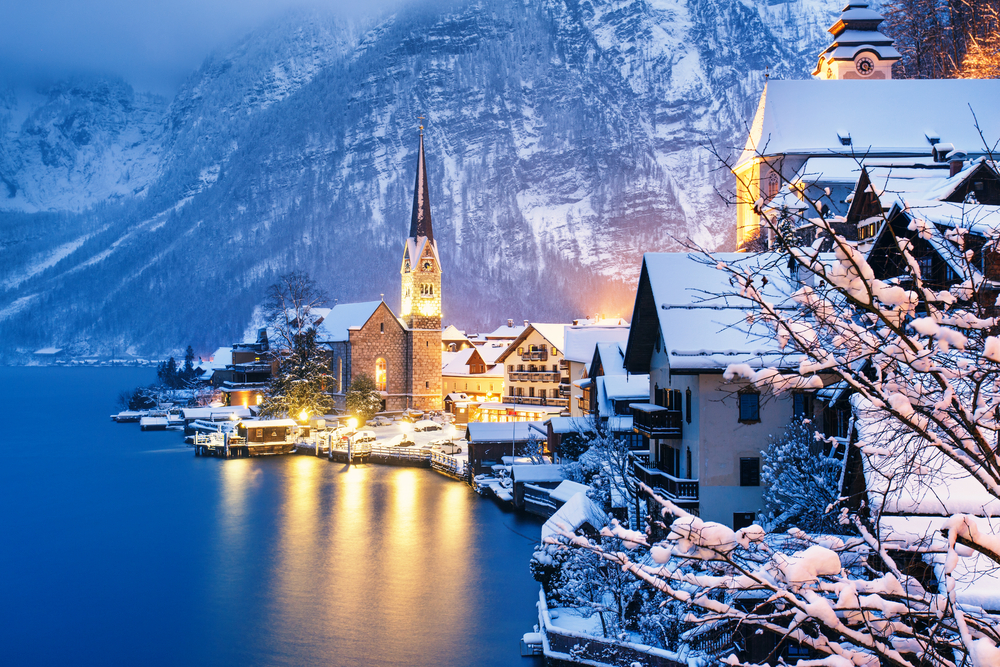 Winter View of Hallstatt and Church of Christ | © Dzerkach Viktar/Shutterstock

The Lake Hallstatt connects three small towns in the Salzkammergut: Obertraun, Bad Goisern and Hallstatt. It is about 125 meters deep and was the most important and only way to transport the mined salt. Today, visitors come to admire the lake from the top of the close mountains, swim in its clear water, or take a boat trip to discover more about the history of Hallsatt and its surroundings, the Salzkammergut.

Parish of the Assumption

The Parish of the Assumption is the prayer house for the Roman Catholic people, and is built on a hill in the city. Over several centuries this church was modified and extended. The church has a double winged altar, which is one of the four most important altars in Upper Austria, and an adjacent cemetery.

This skywalk is located in the Upper Austrian ski resort of the Dachstein Mountains, at an altitude of about 2,700 meters. On clear days it is possible to see over Austria to Slovenia and the Czech Republic. Besides this viewing platform there is a flat platform completely made of glass, which is part of the highest suspension bridge in Austria. 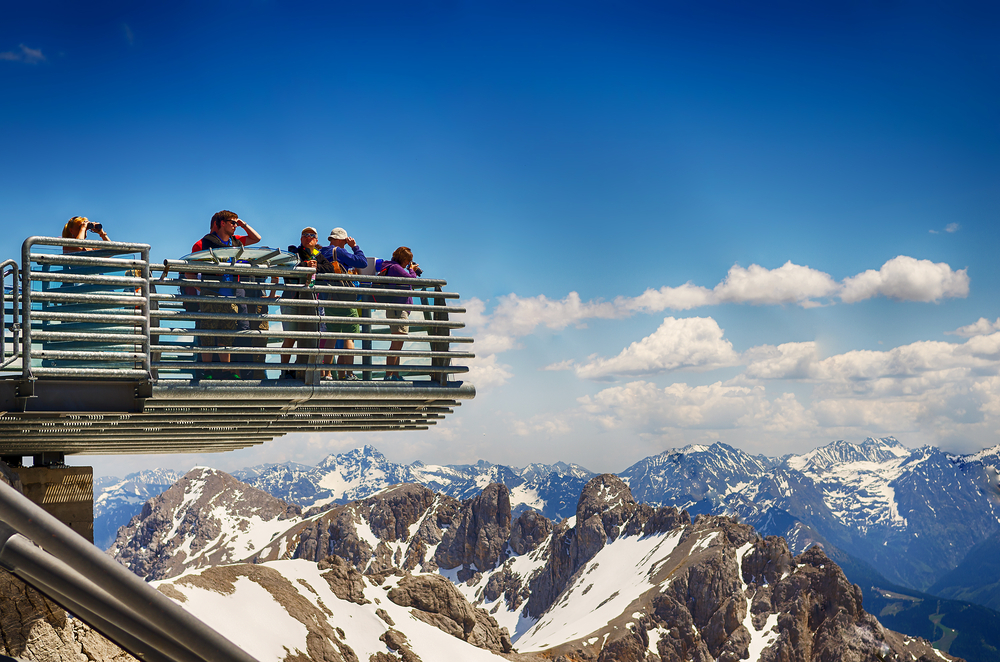 Tourists enjoying the breathtaking view from the extended Skywalk| ©K3S/Shutterstock