The Austrian Quarry that Hosts the World's Toughest Bike Race 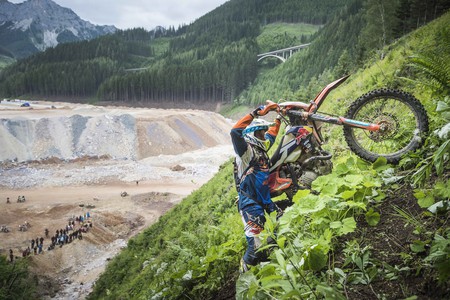 The Erzberg Rodeo can argue its case in being the most brutal bike race in the world. Spread over four days, it sees 1,500 dirt bike riders speed across dense woodland, gravel deserts, ludicrous climbs and death-defying descents, with only a handful finishing each year.

Set within the Erzberg mine in central Austria, it is part bike race, part endurance challenge. The race demands that its entrants ride out of a quarry, in slippery, unstable terrain. At points the incline can be so steep that riders have to resort to pushing, dragging or hauling their bike over each unforgiving step. The sheer amount of revs required means bikes often overheat, the severity of the climb leads to riders toppling over backwards, and if it starts to rain then any game plan goes out the window and it becomes a matter of simply hoping for the best. 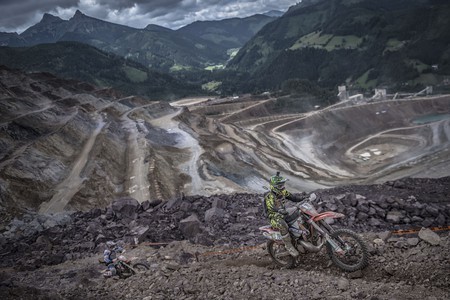 Officially known as the Red Bull Hare Scramble, but more affectionately called the Iron Giant, the prize for completing this ordeal isn’t even a trophy or a fat cheque, just a lump of rock from the side of the mountain that’s just taken years off you life. Of the entire event it is the final hurrah; one final push in an event that sees the world’s best riders at breaking point.

Robbie Maddison, a stunt rider who has backflipping over Tower Bridge and surfing his bike on the ocean on his CV, was lured into competing at Erzberg because of its sheer reputation. He says, ‘It’s pretty different to what I normally do, but then I do such a vast variety of riding. The first time I heard about Erzberg Rodeo was when I saw the first Nitro Circus film – I remember seeing Andy Bell and Travis Pastrana doing it, and those guys are buddies of mine, and I remember thinking I’d love to go and try that.’

The Australian, who first tackled the course in 2015, explains ‘I was blown away by how gnarly the race is. I stopped in my tracks. I couldn’t believe that they were doing something so intense, and fun. This thing looked so difficult I had to try to do it, just because that’s what I love to do. It gives you that sense of achievement. I always like taking the harder route and Erzberg is definitely that. All the riders say how intense and gnarly it is but it’s something you’ve got to do.’ 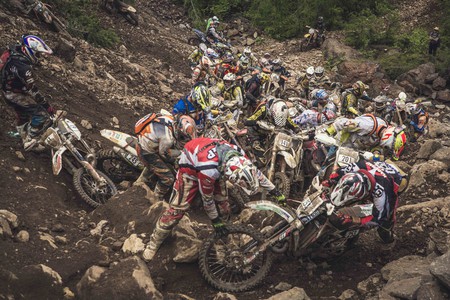 On the day of the Scramble the race starts at midday, with groups of riders setting off with the summit in their sights. At 4pm, the chequered flag is waved, leaving hundreds of riders scattered across various parts of the mountain cursing their luck, nursing injuries and wondering what could have been.

Along the way there are various points that are so difficult, riders are allowed assistance from their own support teams, or even the enthusiastic and adventurous spectators that are scattered across the route. Among the course’s stages are Wasserleitung, a steep incline on a slippery trail of water; Ludwig’s Land, a mountainside of trees and large rocks not out of place on a brutal hiking trip; and Carl’s Dinner, a collection of boulders that riders must navigate from one to the next.

But just getting to this monumental climb is a challenge in itself. Riders must first complete the Iron Road Prologue, essentially the qualifier for the Scramble. It’s a gravel road 13.5 km long and 30 wide, with riders having to determine the best line to take as they navigate their way up the mountain. Riders have two attempts to make it up to the 1,466 metre summit in the quickest time possible and secure their starting place in the Scramble. 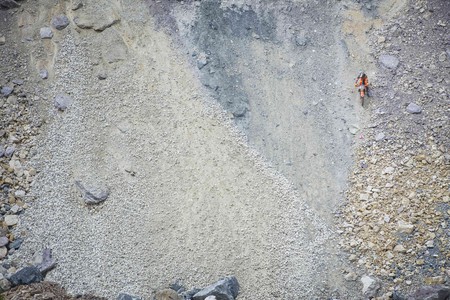