The Most Beautiful Castles in Austria 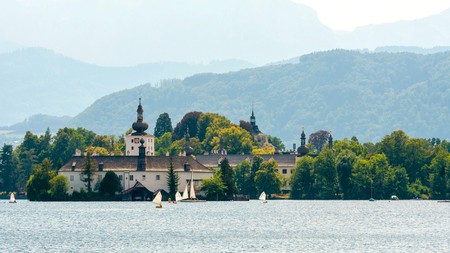 Dating back a millennium, Schloss Ort is one of the picturesque and historic castles you can explore in Austria | © ako / Alamy Stock Photo

Dotted amidst the towering Alps, Austria is home to a wealth of fairytale-like castles. In fact, Austria’s fortresses are so widely renowned, they inspired JK Rowling to create the fictional Nurmengard Castle in Harry Potter and the Deathly Hallows. From Schloss Ort to the Schönbrunn Palace in Vienna, these are Austria’s finest castles. 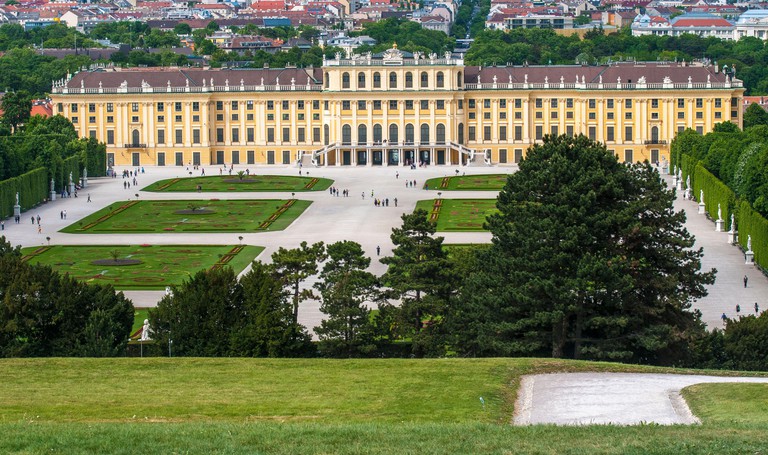 © Philip Game / Alamy Stock Photo
Originally, it was intended to be a magnificent hunting lodge for the heir to the throne, Joseph I. Renovations on the castle and its park were started in 1743, under the reign of Empress Maria Theresa. Between the middle of the 18th century and World War I, Schloss Schönbrunn was the summer residence of the Austrian imperial family, and the political centre of the empire during the hotter months. It is the biggest castle in Austria and, since 1996, a Unesco World Heritage site. Today, because of its beautiful park, it serves as local recreation space for the inhabitants of Vienna, plus it hosts beautiful Easter and Christmas Markets. 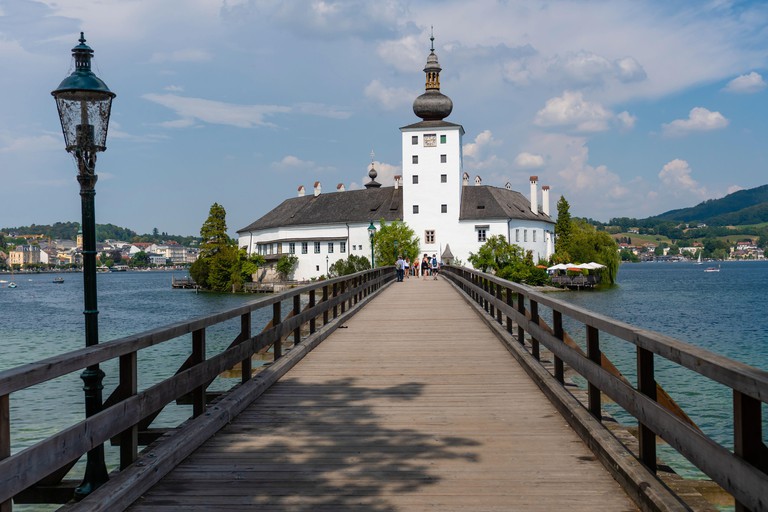 © ako / Alamy Stock Photo
The first time this castle was mentioned in an historical record was in 909 CE, and it is therefore one of the oldest buildings in the area of the Salzkammergut. The first owner of Schloss Ort was Hartnidus of Ort (who founded a castle on the site in 1080), but in 1483 it became the property of the Habsburg family. It has changed owners regularly, and now belongs to the city. Today, you will find a school for agriculture and forestry, a restaurant and a souvenir shop on site, plus it’s a popular venue for concerts and weddings. From 1996 to 2004, it was also the main location for the hit Austrian television series Schlosshotel Orth. 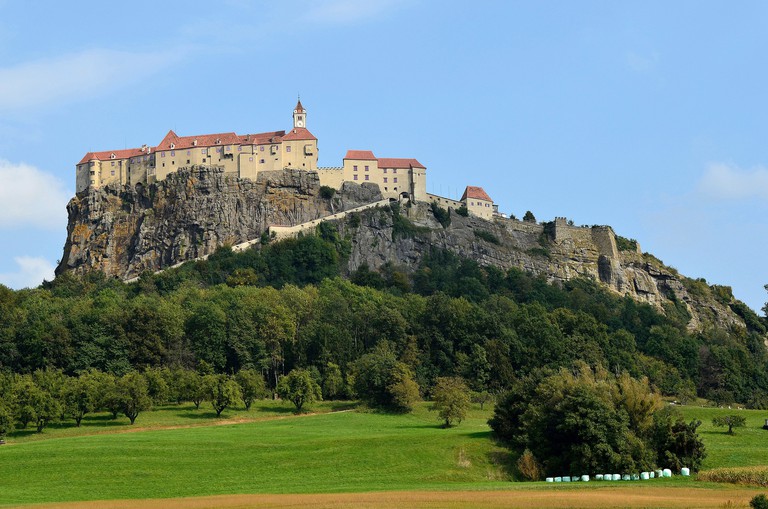 © Fotofritz / Alamy Stock Photo
It is said that Riegersburg Castle is one of the strongest forts in the Western world. For centuries, it was never conquered, and today it is a popular place for both tourists and locals to visit. Nowadays, it is easier to access the fort; the walk up the hill is an adventure in itself – the walls, with their embrasures, tell the castle’s history as you climb towards the entrance. It is the perfect day out for anybody who is interested in Austrian myths and legends (including tales about witches), plus kids will love the birds of prey displays. 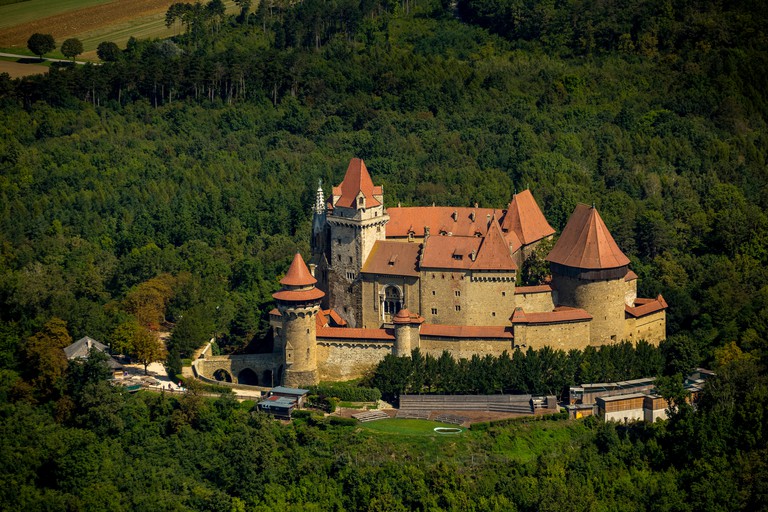 © imageBROKER / Alamy Stock Photo
Castles don’t get more fantastical than Burg Kreuzenstein. It is easy to see why a lot of Hollywood movies were shot here, such as The Three Musketeers (1993) and Season of the Witch (2011) with Nicholas Cage. This castle had a very powerful weir system, thanks to its location on high ground in a forest near Vienna and the Danube. Today, it is a popular destination for the Viennese as well as tourists – learn more about the castle’s history inside the museum and, if you’re lucky, you might catch one of the eagle shows. 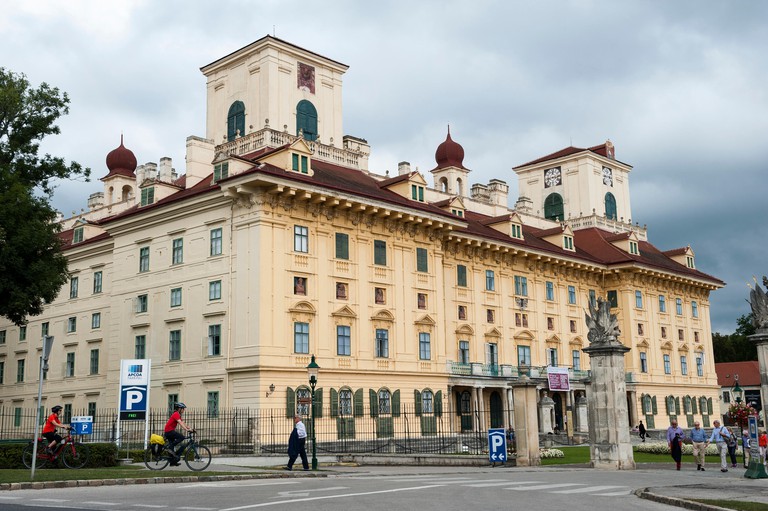 In 1622, the Hungarian Esterházy family came into possession of the Schloss Esterházy, which, even then, was already 300 years old. It is still owned by the same family and is a popular visitor attraction in the easternmost province of Austria. The most famous room of the palace is the historic banquet hall, which is named Haydn Hall. In the 18th century, Joseph Haydn worked for 30 years as a conductor for the princely family. Appreciate the classical music of this composer and more at the Haydn Festival, held every September at the castle.

Until 1918, this Vienna castle was the political centre of Austria’s monarchy, where the Wiener Kongress met. Even today, it is still the centre for political business and the official seat of the president of the Republic of Austria. There are several buildings that form the Hofburg, including the Spanische Hofreitschule, the court’s school for its horses that is known around the world, and the Austrian National Library. If you’re around on a Sunday, pop into the Gothic Imperial Chapel, where the Vienna Boys’ Choir performs every Sunday. 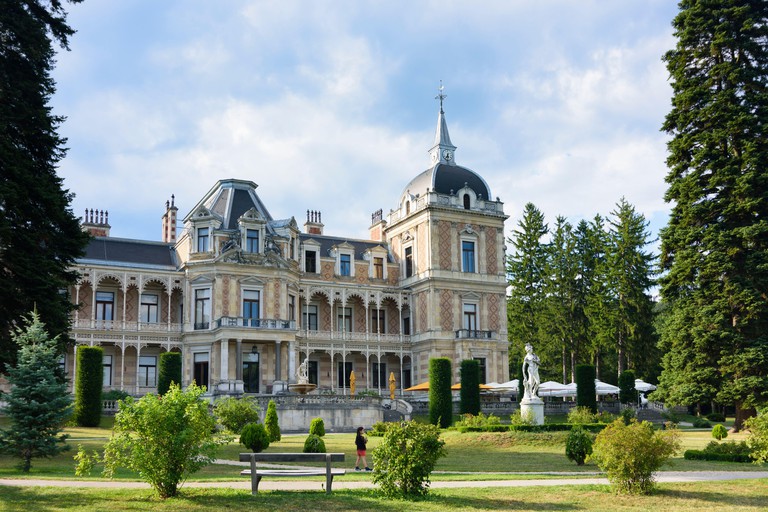 © mauritius images GmbH / Alamy Stock Photo
Empress Elisabeth called it the Palace of Dreams. The Hermesvilla was a present from her husband, Emperor Franz Joseph, in the hope that he could keep Elisabeth (aka Sisi, who loved to travel) more often in Vienna. The palace is located in the Lainzer Tiergarten, which was an area for hunting and is now a nature reserve. If you visit today, you’ll get a deep insight into the history of the house and the private life of the imperial couple. Stop by the restaurant for lunch – it features produce grown in the on-site kitchen garden. 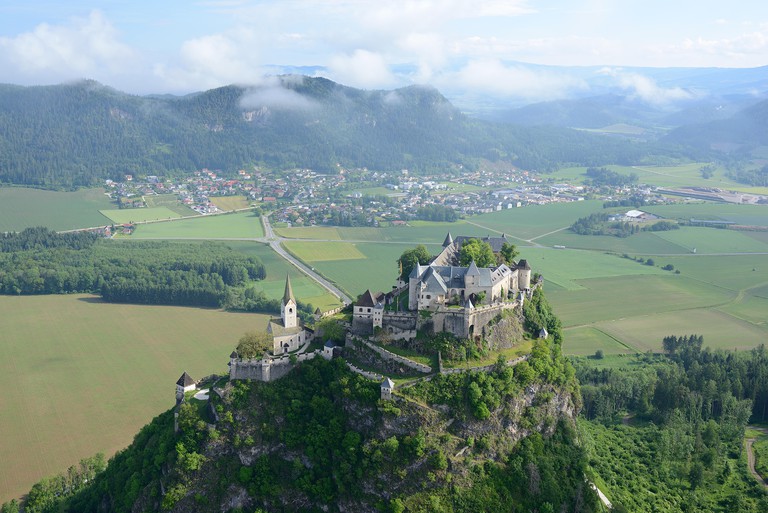 © aerial-photos.com / Alamy Stock Photo
You can’t miss Burg Hochosterwitz – it is perched on top of a 172m (564ft) high rocky outcrop in the southern province of Carinthia. The castle was first mentioned around 860 CE; it belonged to the Schenk von Osterwitz family, and after their last descendant died, Emperor Friedrich III became the owner. It was transferred to the Khevenhüller family, who still own the castle today. You’re welcome to visit some parts of the castle from Easter to the end of October – stroll up the 620m (0.4mi) pathway to the castle, passing through 14 gates, each painted with imagery of the defense mechanism used to protect the entranceway. 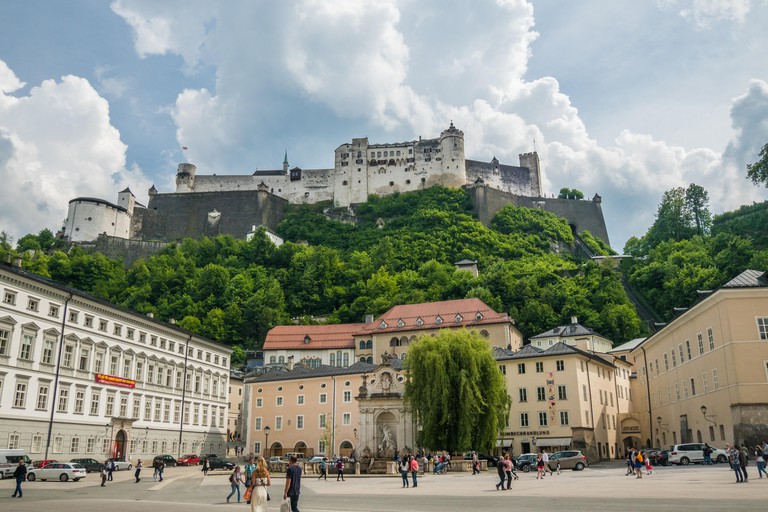 © escapetheofficejob / Alamy Stock Photo
On the top of a hill rises the Festung Hohensalzburg, a fixed part of the skyline in the beautiful city of Salzburg. It is one of Europe’s largest existing castles from the 11th century. This impressive building protected the principality and local bishops, and was a symbol of their political might. Your entrance ticket will allow you to tour the castle, as well as the oddly fascinating Marionette Museum. Make sure you poke your head into the Golden Hall with its gold-studded ceiling – classical music concerts are held in here today.
Give us feedback