Vienna is a beautiful city with a fascinating history, incredible architecture and an enthralling range of art venues. Traveling to the Austrian Capital, Eleni Markopoulioti writes about the inspiring buildings of the city and some of the captivating exhibitions and works of art that are on display.

Vienna, the home of the Secessionists, makes for an exceptional art culture break during the winter months. It is not only because you find yourself enchanted by the art nouveau buildings or Gustav Klimt’s The Kiss (1907-1908), but also because Vienna has seen a rebirth in the past few years as a center for contemporary art. 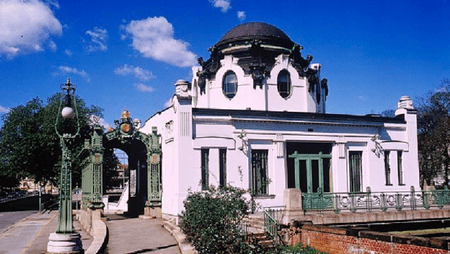 The art nouveau buildings of Vienna stimulate your senses on every corner. Otto Wagner – the architectural leader of the Secessionist movement in Austria – has left his mark on the city with façades that exhibit clear structures, geometric forms, and floral ornamentation. Amongst the gems decorating the city are the rail station buildings on Karlsplatz (1898). The buildings are still in use and one of them now houses the permanent Wagner collection. The Otto Wagner Pavilion façade exhibits a balanced structure with dynamic lines that is reinforced with metal structures painted in apple green. The projecting arch is decorated with gold ornamental patterns while a sunflower motif is painted on its highest marble tier. 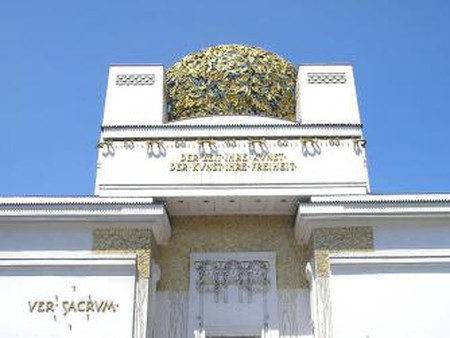 Just around the corner from Karlsplatz one can find the Secession Pavilion designed by Joseph Maria Olbrich at the young age of 30. The pavilion was used as an exhibition space for the Vienna Secessionists and is considered a symbol of architectural rebellion. The flat façade is of the Jugendstil style (style of youth) and is dominated by an openwork dome with a circular laurel sculpture. Inscribed over the lower level entrance is the motto ‘Der Zeit Ihre Kunst, Der Kunst Ihre Freiheit’ (To Every Age Its Art, To Art Its Freedom). The interior of the pavilion is also notable for its architectural innovation: it includes movable walls that allowed the galleries to be redesigned for each exhibition. 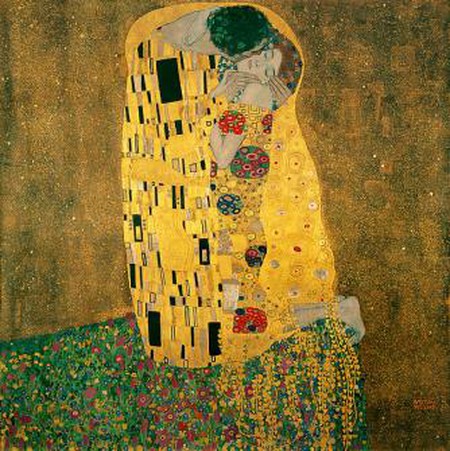 The Belvedere Museum and Klimt’s The Kiss

The Belvedere Museum, situated in the eponymous Belvedere quartier, is found in two breathtaking palaces: the Upper and the Lower Belvedere. They are the finest examples of Baroque architecture in Vienna, designed by Johann Lucas von Hildebrandt, and were originally the summer residence of general Prince Eugene of Savoy (1663-1736). Within their permanent exhibition is one of the largest collections of Klimt and the Viennese Secessionists, amongst the other classical and baroque art on display. The undeniable highlight of the whole collection is The Kiss: a silver and gold-plated canvas, showcasing a couple who are embracing. It is largely considered as a symbol of love and passion. We should note the definite erotic overtones of the piece: the facial expressions, the couple intertwined so that you can’t see where each figure ends, and even the flexed toes all suggest the sexual undertones. Illuminated by a golden halo, the painting exhibits both arts & crafts and art nouveau elements: the male figure’s robe is characterized by square and rectangular forms, while the female’s rope has soft lines and floral patterns. The work is a perfect example of Klimt’s Golden Period.

The Museumquartier and Egon Schiele

The Museumquartier, housing 12 cultural institutions, is the major museum hub for art in Vienna. Visitors can literally spend days just in this location. The Leopold Museum, designed by Ortner & Ortner, is a cube-like structure built with white shell limestone from the Danube and has a diverse collection from Japanese prints to the Vienna Secessionists. The highlight of the museum is certainly its vast Schiele collection and more so the expressionist artist’s Self-Portrait with Lampion Fruit from 1912. 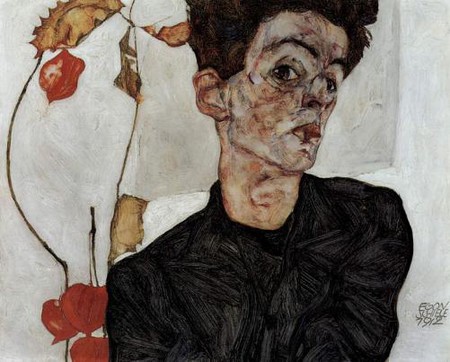 At the young age of 22, Schiele depicts himself at that point of one’s life where one crosses continuously between self-confidence and fragility, adulthood and youth. This combination of power and fragility is expressed through the arrogant but half-turned away face and Schiele’s ‘agitated’ lines: lines that are at once both dynamic and shatterable.

The area of Pilmgrasse is filled with contemporary galleries and exciting exhibitions of both established and emerging artists. Previously the Christine Koenig Galerie was showing the work of Gustav Metzger and Gerhard Rühm. The exhibition explored the relationship between politics and the media as an act of deconstruction where one reassembled the elements to independently create his or her own opinion.

The artists met in person at the ‘Destruction in Art Symposium’ held in 1966 and even though they never officially collaborated, they have shared a similar visual context that is clear from this exhibition. Rühm’s work shows ripped newspaper pictures, in which pages are collaged in layers. His series Deutsche volkslieder and geistliche gesänge set segments cut out of music scores into a pointed relationship with photos. Metzger presents two interactive installations: ‘Today and Yesterday’ and ‘Historic Photographs to Crawl Into – Anschluss, Vienna, March 1938’ (1996). 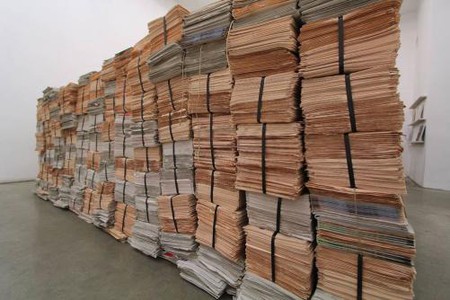 The former is a sculpture composed of hundreds of newspapers whereby the viewer is asked to cut out articles and pin them on the adjacent foam board. The artist highlights the relationship between mass opinion and individual opinion via a large amount of publications and the individual act. It is interesting to note that almost every visitor cut out articles with heavy visual imagery.

The latter work is a historically charged photograph of a traumatic moment in European history. It is covered by a piece of yellow cloth and requires the viewer to crawl under it. It is a rather frustrating experience initially, as you unconsciously want to view the whole photograph, but after a few moments you start focusing intensely on each element of the black and white picture in the dark setting underneath the cloth, and begin to reflect on the artist’s intention. The viewer is required to deconstruct his/ her perception of historical events into elements and reconstruct the idea in his/ her own way, while also having a physical relationship with the photograph.

Within the baroque and secessionist context, a contemporary culture has also flourished in Vienna, making it an ideal place to visit if you want to see old masters, modern masters, and even foresee some future ones.