Bond fans will be able to relive Spectre‘s dramatic snow-chase scene at new cinematic installation 007 Elements, based at the summit of Gaislachkogl mountain, where the 2015 movie was filmed.

This sleek concrete box hanging from the precipice of an Austrian mountain could easily be the lair of a modern-day Bond villain, imagined by illustrious set designer Ken Adams. Framed by vertigo-inducing floor-to-ceiling windows, the climactic location at the 3,000m summit of Gaislachkogl in Sölden transports you to the spectacular action-packed scenes of Spectre. And its stark retro-futuristic interiors, which recall the John Lautner-style villas associated with Bond movies since the 1960s, only serve to enhance the effect. 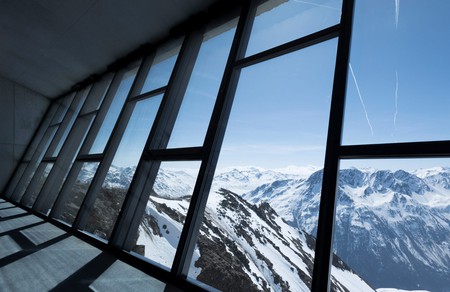 The building, designed by Austrian architect Johann Obermoser, is close to where Bond plunged into an improbable snow chase involving a plane and fleet of Range Rovers.

Next to the museum is the glistening glass and steel ice Q restaurant, flanked by the Gaislachkogl cable car building that, thanks to its ribbed steel structure and futuristic foil cladding, is reminiscent of the barrel of an AF2011 Dueller shotgun. Ice Q was selected by Spectre art director Neal Callow as the set for the private medical clinic where Bond meets Madeleine Swann for the first time before she’s abducted by the evil Mr Hinx. Bond follows in hot pursuit.

Apparently this famous episode wasn’t even in the original script – it was the location manager who, on seeing the Ötztal Glacier Road from her gondola on the way to the ice Q, decided there and then it would be perfect for a classic Bond chase scene and so it was integrated into the film.

The idea for a dedicated Bond museum to sit alongside the Alpine restaurant was Jakob Falkner’s, who owns the cable car system in Sölden. It was deliberately designed to reference Adams’ classic 1960s and 1970s Brutalist angles, while embracing the high-tech innovation of the latest movies.

The museum sits alongside ice Q, which featured in 'Spectre' | © Christoph Nosig/007 ELEMENTS

Far from a few film posters stuck on the wall, the museum is designed to be experiential and multisensory, immersing visitors into the world of Bond with dramatic dark chambers and engaging soundscapes. Entering through an underground tunnel, the exhibition unfolds through the slopes, leading visitors downwards through constantly shifting spaces from the atmospheric anteroom called ‘Barrel of the Gun’ – which focuses on the innovative title sequences – to the dramatic open-air plaza with panoramic views of the Tyrolean valleys beyond. 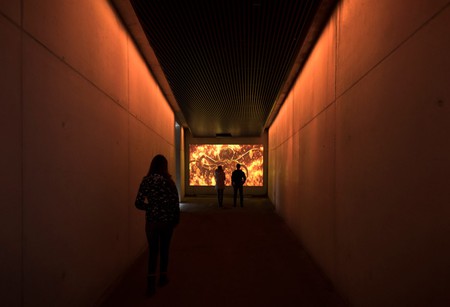 The Barrel of the Gun anteroom, which displays the dramatic title sequences | © Kristopher Grunert/007 ELEMENTS

“Our aim with 007 Elements is to tell the story of the making of 007 films in an ultra-modern, emotive and engaging way,” says Callow in a statement. “We want to use this incredible location to place our guests into Bond’s environment, and bring the stories to life in a unique and unforgettable way.” 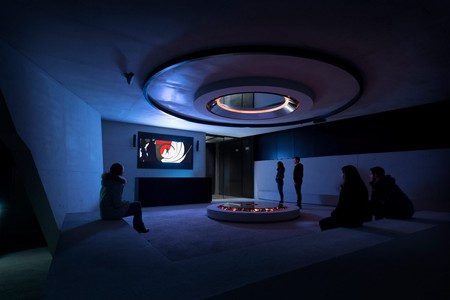 The Action Hall is possibly the most alluring space for die-hard Bond fans, showcasing the work of the special effects and stunt teams. Here, visitors will find the full-size model of the plane used in Spectre and other large-scale props including Bond’s Range Rover, which can be changed over with new releases via a special 49sq m ceiling hatch. 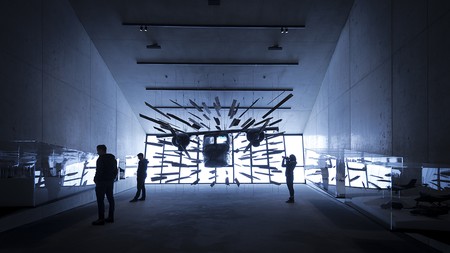 Bond and Austria are inextricably linked, with author Ian Fleming spending much of his early life in Austria, having set up a network of agents in the country. Tyrol is also where Fleming learned to ski, with his character Bond also taking up skiing in Austria and honeymooning in Kitzbühel in On Her Majesty’s Secret Service.

007 Elements opened its doors in July 2018 and the exhibition will be a permanent fixture, although it will be updated to keep it relevant as the 007 franchise continues.