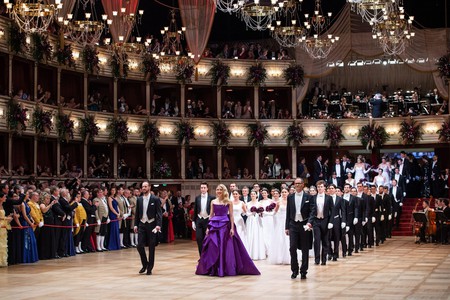 Ballroom dancing has declined across Europe since its heyday in the 19th century, but around 450 formal balls still take place in Austria every year. Culture Trip speaks to celebrity dance teacher Thomas Schäfer-Elmayer, whose prestigious dance school continues to attract hundreds of teenage students each year.

Tall, slim and dressed in an immaculate suit, Thomas Schäfer-Elmayer’s elegant, formal appearance is a clue to both his heritage and his work. Now in his mid-70s, Schäfer-Elmayer comes from a line of talented ballroom dancers and is the director of Tanzschule Elmayer (Elmayer Dance School), the dance school that his grandfather created in 1919. It’s regarded as one of the most prestigious dance schools in the world, and several hundreds of thousands of young people have passed through its famous green doors.

Like the dances he teaches, Schäfer-Elmayer is charming, graceful and always perfectly poised. For many years, he was in charge of the opening dance for the Opera Ball, considered the principal event of Austria’s ball season. He became a household name in Austria after his 10-season tenure (2005-2016) on the series Dancing Stars, and in 2006, the Austrian state awarded him the honorary title of professor in recognition of his impressive career. 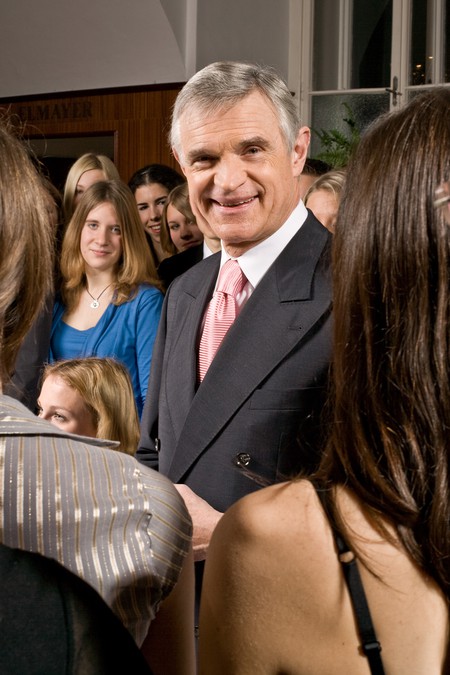 Schäfer-Elmayer’s grandfather, Willy Elmayer von Vestenbrugg, an Austro-Hungarian cavalry officer during World War I, decided to open a dance school a year after the conflict’s end. Becoming a dance teacher was very unusual for an aristocratic military officer, but the decision was in part to help his comrades recover from the horrors of the war. This innovative approach appears to have been echoed elsewhere in post-war Europe, too, as Schäfer-Elmayer says, “I read a story of a French officer who had been in a similar situation and opened a dance school in Paris.” Today, Schäfer-Elmayer proudly states that between 200 and 600 young people attend classes at the dance school each week, many of whom are there to prepare for Austria’s famous ball season. 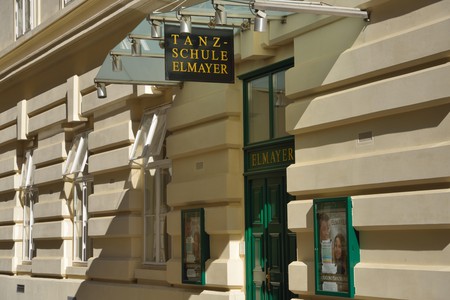 Vienna’s tradition of ballroom dancing dates back to the 18th century when Emperor Joseph II, who was known for his modernising reforms and disliked the exclusivity of the dances that took place within his palace, decided to open the Redoute Rooms of the Hofburg Palace to people of all ranks. “One of his major reforms was that the public could enter the palace to see the balls,” says Schäfer-Elmayer. Previously, masks and costumes had been reserved for nobility, but now, people who were able to afford a ticket could watch the formal balls and were keen to emulate the custom.

During the Congress of Vienna in 1814-15, many dances took place in the Redoute Rooms. Indeed, the European heads of state appear to have spent much of their time celebrating. Facilitating these balls became so expensive that Vienna had to double its taxes. “Everyone was trying to outdo each other with galas, parties, celebrations,” says Schäfer-Elmayer with a dignified chuckle, who recalls that when asked how the congress was playing out, Napoleon is thought to have remarked, “It’s not going, it’s dancing.” At the same time, the Austrian nobility started to give private balls in their own palaces. 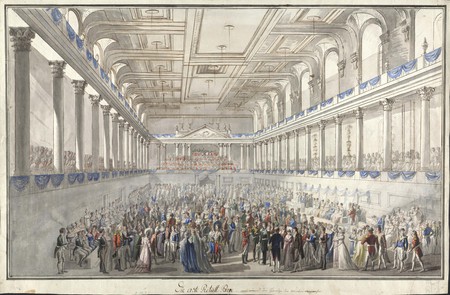 Today, more than 450 balls take place in the city each year, many of which were originally founded to celebrate different industries. There’s the extravagant Vienna Coffeehouse Owners’ Ball, the Confectioners’ Ball and even the Ball of the Viennese Chimney Sweeps. But the largest and most famous ball in Austria is one that Schäfer-Elmayer’s grandfather created, the Opera Ball. Ilse Heigerth, a tour guide in Vienna, explains that families and friends in Austria gather around the TV each year “with good food and champagne” to watch the Opera Ball and discuss the outfits on display. 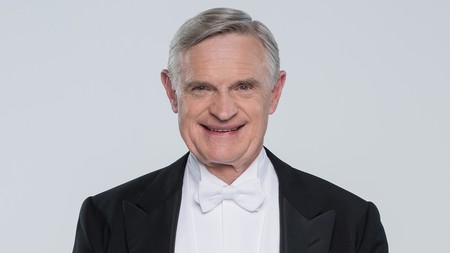 Tickets for the major balls sell out quickly, with people travelling from across the world to attend the most prestigious. Having been in charge of the opening ceremony of the Opera Ball for many years, Schäfer-Elmayer now trains and manages the opening performances of around 50 balls, but he insists that “the smallest school ball is as important for us as the Opera Ball.” He has also created his own event, the Elmayer-Kränzchen. This traditional ball is the last one of the season and takes place at the spectacular Imperial Castle.

The dynamic ball season – which begins on 11 November each year, at the start of Austria’s traditional carnival season, and reaches its peak in January and February – means that there’s still a high demand for ballroom-dancing lessons in Vienna. Indeed, classes at Tanzschule Elmayer are so popular that Schäfer-Elmayer generally sees a queue of eager dance students extending round the corner. “We still have this tradition that young people around 15 or 16 years old go to dance classes for half a year,” says Heigerth, who met her first boyfriend at ballroom lessons. With her teenage son now attending dance school, she comments that it’s “still a tradition that is alive, especially in the society families”. 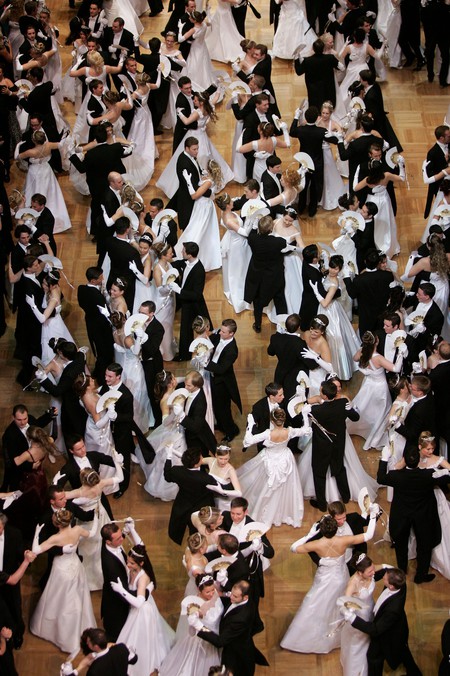 While ballroom dancing has declined in much of Europe, it’s still thriving in Vienna | | © Sean Gallup / Getty Images

It might come as a surprise that Vienna’s youth are actively looking to master ballroom dancing steps. The opening ceremony of the main balls in Vienna is always danced by those between the ages of 16 and 26. “Young girls’ dream is to dance in the opening ceremony,” says Schäfer-Elmayer. When asked whether there are enough boys for girls to partner up with, he says, “This has been a problem since the start. My father also went to the altar to pray for boys.” However, there’s always been a steady stream of boys attending classes, and now, “some classes have more boys than girls.” 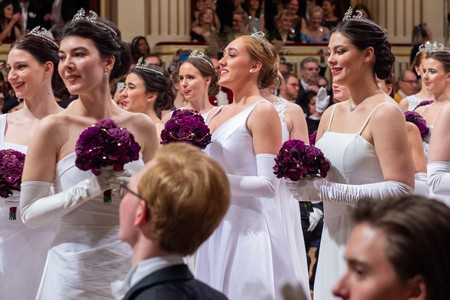 While there are 20 dance schools in Vienna, Schäfer-Elmayer attributes the high attendance of teenagers at his school in part to its welcoming atmosphere. “It’s such a youth centre here,” he says, with many people making friends – and even meeting partners – for life. “The reason that deep friendships form is that you have so many opportunities to meet different people.”

Tanzschule Elmayer, which lies in the centre of town near the Spanish Riding School, also teaches young people how to behave in society. Always effortlessly composed himself, Schäfer-Elmayer says that “there’s a lot of social training”. Aspects of etiquette taught include table manners, invitations and dress code.

Like the balls themselves, classes at Tanzschule Elmayer have strict dress codes. Young men attending classes must wear a suit, tie and white gloves – it’s the only dance school in the world that still imposes this particular dress code (Schäfer-Elmayer mentions that it’s great for nervous hands) – and women must wear a dress or skirt, but not trousers. 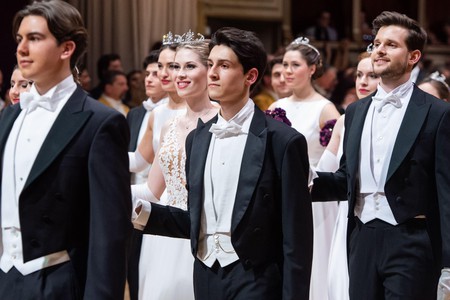 While these codes of conduct, and ballroom dancing itself, may have become outmoded elsewhere in Europe, Schäfer-Elmayer and his family have played a role in keeping them alive – and indeed, flourishing – in Vienna.

Find out more about Vienna with vienna.info.