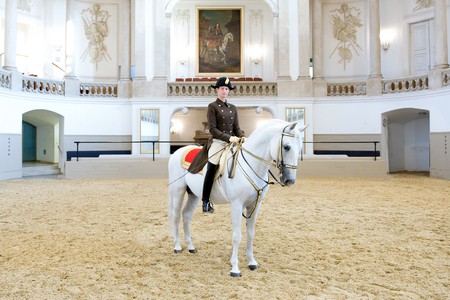 For over 400 years, men dominated Vienna’s prestigious equestrian academy, the Spanish Riding School. This all changed in 2008, when the first women were admitted to the school. Freya Godfrey spoke to Hannah Zeitlhofer, who became the first woman to perform in the school’s famous riding presentations, about her experience. 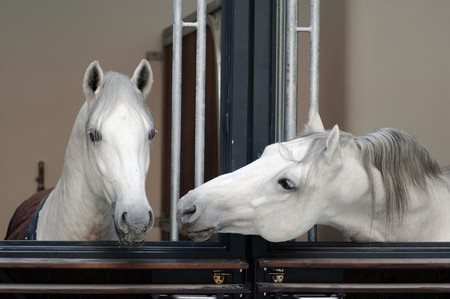 Attend a performance at the Winter Riding School in Vienna, and you’ll be struck by the grandeur of the space. Located within the Hofburg Palace, in a palatial Baroque hall that was commissioned by Charles VI, it certainly doesn’t look like any old equestrian arena, with its pristine white walls and doric columns. And it isn’t: for centuries, elaborate dressage displays have been performed here by some of the best riders in the world – and they still are today.

A riding arena has been in this location since 1565, but the splendid building that houses performances today was built between 1729–1735. The Winter Riding School, as it’s known, is surrounded by two balconies, which are framed by stone balustrades. Arched windows line the building, and the ceiling is resplendent with pretty floral carvings, from which three huge chandeliers hang down.

Fitting for such a spectacular arena, shows here are suffused with pomp and ceremony. The events are accompanied by traditional Viennese music, including the Viennese waltz, and some shows feature members of the celebrated Vienna Philharmonic Orchestra. As the academy’s trademark white Lipizanner horses walk in – originally a Spanish breed, hence the school’s name – their riders doff their bicorne-style hats to an imposing portrait of Charles VI that hangs prominently above the entrance. 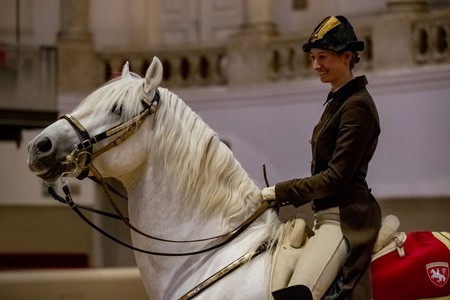 Elegantly dressed, the riders are turned out in the same outfits they and their predecessors have worn for hundreds of years: brown frock coats over breeches, suede gloves and polished black riding boots. They hold birch riding crops in their right hand as a reminder of the school’s military past.

During the performance, Vienna’s dancing horses display classical dressage, not too dissimilar to that which would have been presented to the court during Charles VI’s reign. The highlight is the final act, the “School Quadrille”, in which the horses impressively pirouette and exhibit other classical dressage tricks, such as ‘flying changes’, where they appear to skip.

While it’s clear that little else has altered in its history, one seemingly minor, yet notable, change has significantly modernised the academy in recent years. Now, visitors attending a performance at the Winter Riding School may see one of the inaugural women performing within its distinguished hall. 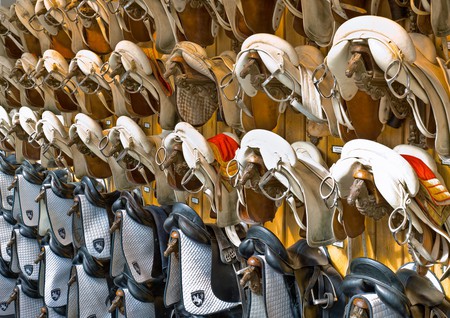 Although there was no concrete law against it, for centuries not a single woman joined the school. This all changed in 2008, when Elisabeth Gürtler, the first female manager of the Spanish Riding School, encouraged applications from women for the first time, keen to modernise the school. Gürtler explained in an interview at the time that women hadn’t actually been banned from applying previously, “It just sort of ended up that way.”

The rigorous entry process involves a written application, interview and riding performance, and in that same year, Hannah Zeitlhofer, then aged 21, was granted entry to the school. Today, the majority of the school’s élèves (students) are female, and 95% of its applicants are female.

“To be the first woman in the Spanish Riding School is, of course, an honour for me,” says Hannah. “For every young person who can start their career in this riding school, it is a very special thing.” The academy receives around 200 applications each year, of which just two or three people are admitted. As Hannah explains, “Only a handful of people get this possibility.” 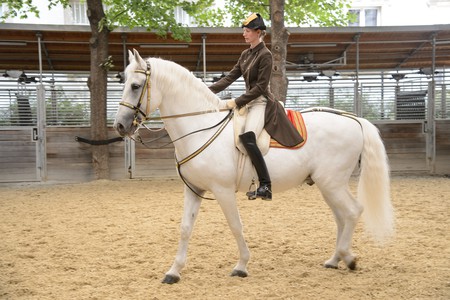 After a rigorous entry process, Hannah Zeitlhofer was granted entry to the school in 2008 | Courtesy of Spanish Riding School

Needless to say, not everyone supported the introduction of female riders at first. “Most of the people reacted positively to the new development. But some were skeptical because they thought it was a break from tradition.” It wasn’t just those from the establishment who were hesitant, but Hannah’s new peers, too. “Even the long-established riders of the Spanish Riding School were skeptical at the beginning,” says Hannah, “but my ambition and my willingness to work convinced them.” Naturally, being a trailblazer hasn’t always been easy, and in her early riding performances, Hannah stood out as the only woman in a historically all-male event. “Of course, in the beginning, when I was the only girl, I always wanted to be particularly good to not attract too much attention.”

Gürtler’s decision to overhaul the entrance criteria was not simply an equality drive, but an opportunity to attract the finest talent from across the German-speaking equestrian world to “the best riding school in the world,” as Hannah explains. “Elisabeth Gürtler, our director at this time, always said that it is not a break from tradition but a further development,” Hannah continues. “Because for her it was important that the Spanish Riding School have the best riders, whether female or male.”

Hannah has been riding since the age of seven and studied equestrian science at university. Her love of horses has inspired her vocation: “I have dedicated my whole life to horses, and it was always my goal to work with horses.” Having grown up in Vienna, its riding school had always been an important symbol for her, and the ultimate goal. 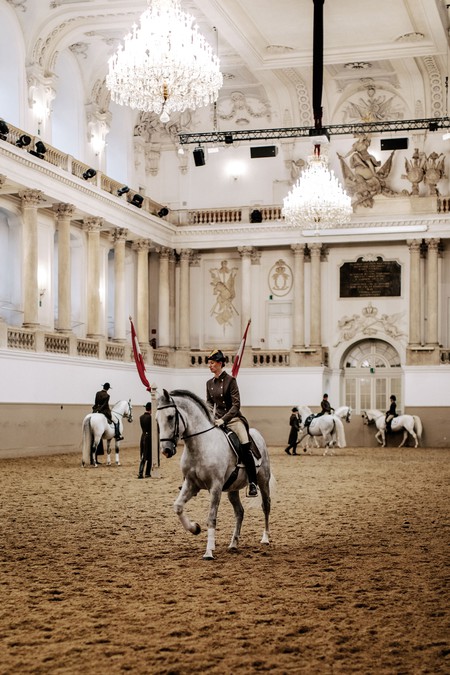 It takes between 8–12 years to complete the training necessary to perform at the Spanish Riding School, and in 2016 Hannah became the first female Assistant Rider in the school’s history. “To become a rider, you have to go through a long education,” explains Hannah. Only four new riders are invited to join the performances every five years, so the journey from joining the school to actually performing can be a long one. As Hannah says, “It was a hard journey from élève (first-year pupil) to a rider, but I am so proud that I did it.”

Hannah’s progress has helped pave the way for more female riders in the school, and since December 2019 she has been joined by another female rider, Theresa Stefan, and a female assistant rider.

Luckily, the pressure of being one of the only women performing in the Winter Riding Hall hasn’t taken away from the thrill Hannah still feels on entering the arena: “It is always a special moment when you step in the Spanish Riding School. For me, it is the most beautiful riding hall in the world, and I am always a little bit reverent and proud to have the chance to work there.”

A tour guide from the school tells Culture Trip that, unlike in the past, “What’s not important now is that you’re Austrian and male.” With so many women applying to the school each year, it seems the influx of female riders will only continue to grow. And as Hannah says, “The most important thing is that you love horses and that you are ambitious and determined.” 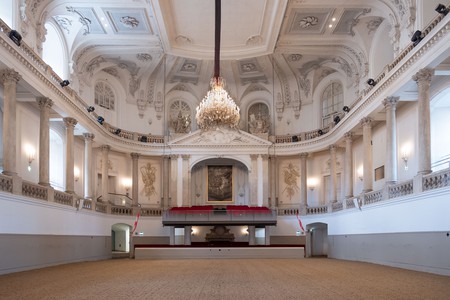 Today, 95% of the school’s applicants are female | © Manfred Baumann

Find out more about Vienna with vienna.info.