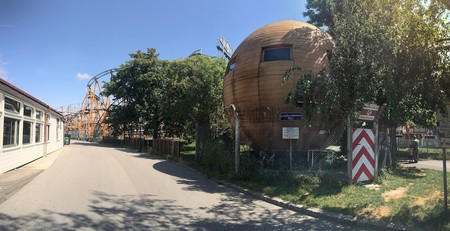 The Kugelmugel as it appears today | © Rosa Menkman / Flickr

The Prater amusement park is one of Vienna’s most famous attractions; home to the iconic red Ferris wheel, called the Riesenrad, and a swing that allows you to see all the way to Bratislava. Tucked behind these landmarks is one of Austria’s most unusual curiosities: the Republic of Kugelmugel, a peculiar sphere that was declared a micronation in the 1970s.

An artist fights the authorities

The origins of Kugelmugel (kugel means ‘ball’ while mugel translates as ‘hill’) lie with contemporary Austrian artist Edwin Lipburger. In 1971, after a long fascination with spherical homes, Lipburger decided to build himself a ball-shaped house in his Lower Austrian homeland of Katzelsdorf, saying that round buildings bore a closer relationship to the natural world. Speaking of his enthusiasm for the spherical shape, he once stated: ‘Everything is round. The earth, life, the ball, everything turns… so why not live in balls? Round is free; it has no beginning or end’.

However, the authorities disagreed with his beliefs, deeming the house to be unsuitable for the town’s conservative aesthetic, and made plans to demolish the Kugelmugel. Consequently, a bitter dispute erupted, eventually resulting in Lipburger being sent to jail for 10 weeks after he refused to pay taxes. The authorities continually threatened to demolish the Kugelmugel and Lipburger eventually made the drastic decision to legally make his home a republic, declaring himself the president of his own micronation. 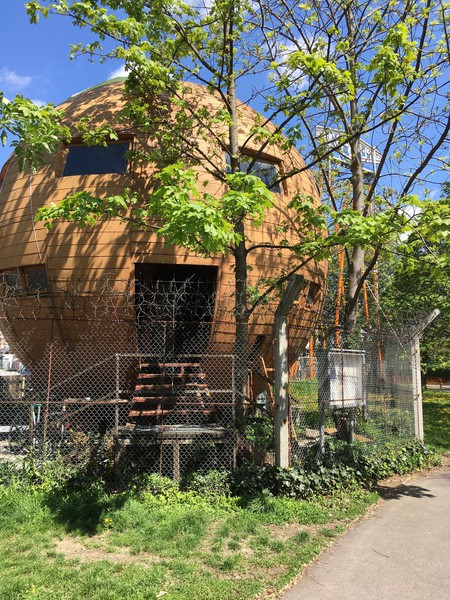 Relocation of the nation

In the early 1980s, in an attempt to dissolve the dispute, the house was moved to the rather conspicuous location of the Prater amusement park in Vienna, and the address was changed to ‘Anti-Fascism Square number 2’. The sphere was protected on all sides by a high metal fence, as Lipburger continued to fear government threats. The nation’s flag, designed with a black eagle on a rose-coloured background, flies proudly outside – in true patriotic style.

What exactly is a micronation?

A micronation is described as ‘a small area or political entity that claims national sovereignty, but is not recognised by other sovereign states’. Albeit very unusual, the Kugelmugel isn’t entirely unique. Other micronations around the world include the former Republic of Rose Island in the Adriatic sea and the Bumbunga Province in southern Australia.

Edwin Lipburger passed away in 2015 and his home eventually came into the possession of the Viennese authorities. Although the nation of Kugelmugel still has around 650 citizens, known unofficially as Kugelmugians, its primary function is now as a tourist attraction. It’s easy to get to; simply stroll in the Prater amusement park, where you’ll find it on the west side next to a rollercoaster. The interior of the house, which is decked out in wood, acts as both a museum and gallery, with photographs of the Kugelmugel’s former location and a brief history of the dispute. The Kugelmugel also hosts occasional exhibitions.