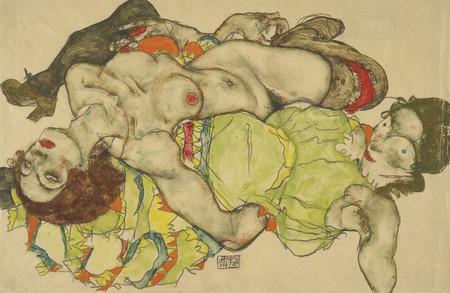 There’s only one month left to see Egon Schiele, the Albertina’s comprehensive exhibition of paintings by one of the 20th century’s most revolutionary artists.

Alongside his mentor, Gustav Klimt, Egon Schiele (1890—1918) remains one of the early 20th century’s most celebrated Austrian painters. Emaciated self portraits at masterful angles and provocative depictions of nude models poised the young artist for wild success in the face of tired artistic traditions—and he briefly enjoyed notoriety before tragically succumbing to Spanish influenza in 1918. 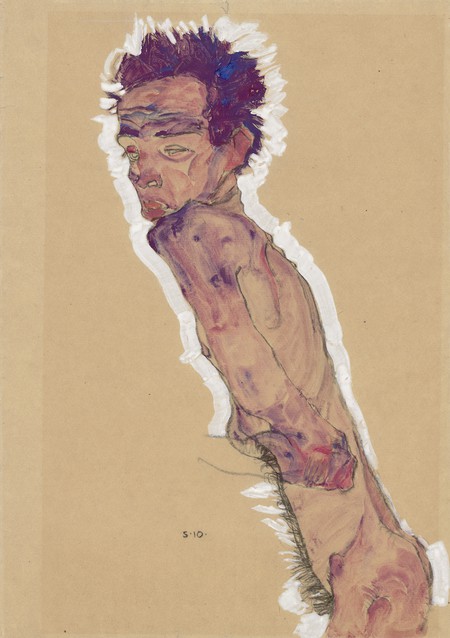 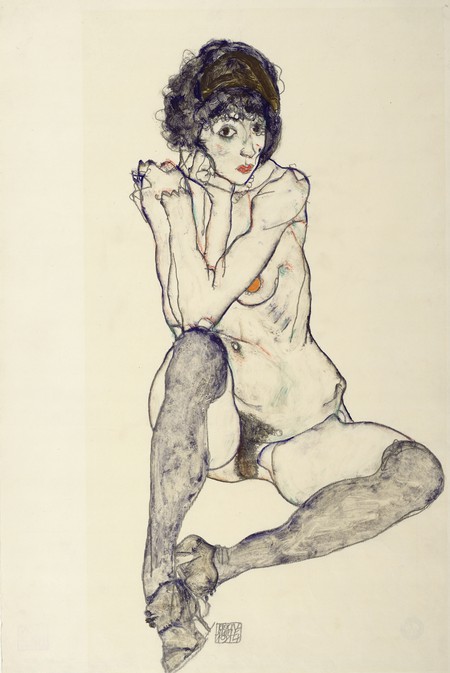 Though he died at only 28 years of age, Schiele was a prolific painter and draftsman during his short career. The Albertina places 160 of the artist’s masterful gouaches and drawings within the context of Vienna’s zeitgeist—a time of rapid exploration amongst the Austrian capital’s intelligentsia. From Freud’s pioneering exploration of the human mind to changing tides in music and poetry, Schiele lived in an era of curiosity—one which he, too, would come to define. 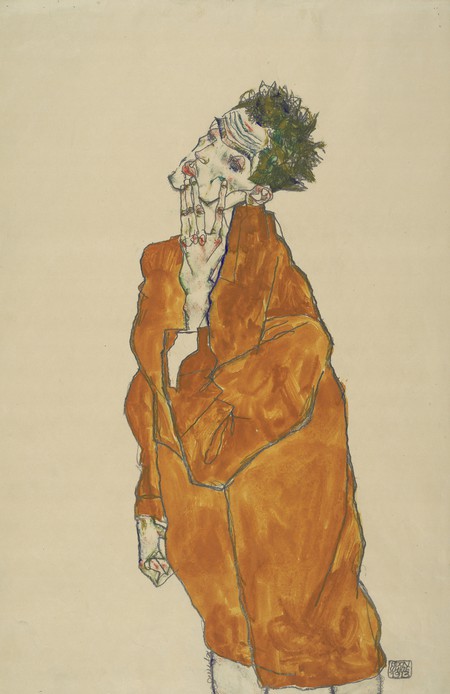 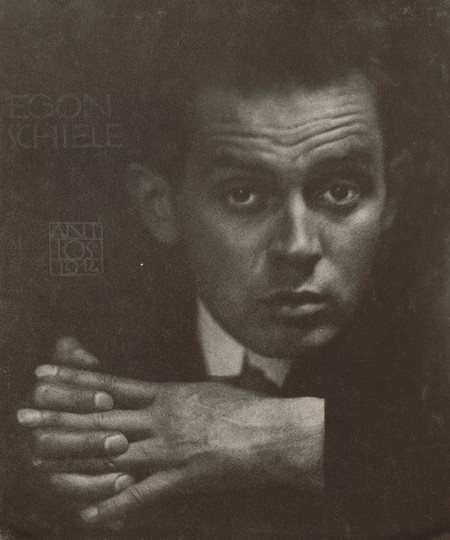 The Albertina’s survey of Schiele’s work “positions his radical oeuvre within an epoch characterised by a schism between the modernist and the traditional.” Through the exhibition of Schiele’s drawings and watercolors alongside rare photographs of the artist and contextual artifacts relevant to his work, Egon Schiele “introduce[s] viewers to an artistic oeuvre that highlights human beings’ existential loneliness as its great theme, while drastically opposing the values of fin de siècle society.” 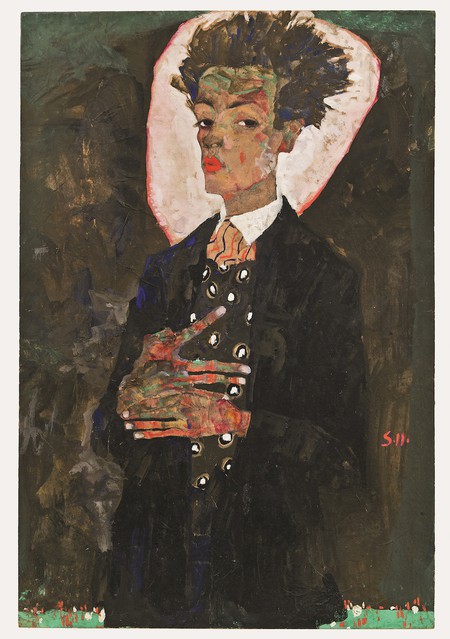 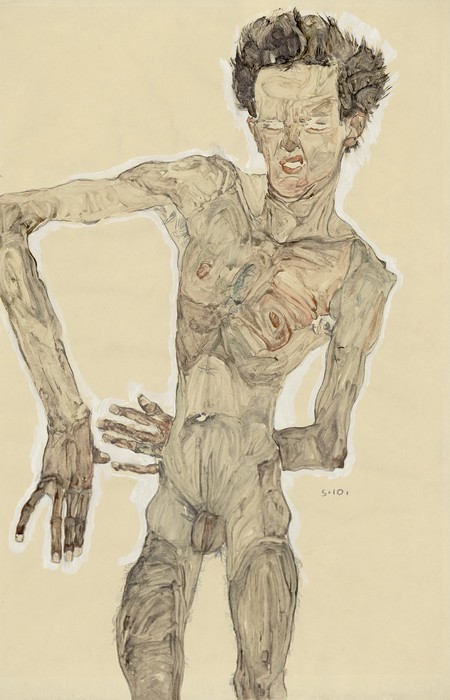 In fact, Egon Schiele presents viewers with more than a dichotomy between the old world and the new. Schiele’s oeuvre is rife with duality: the radical and the traditional; the pious and the iconoclastic; the private and the public self. The two consecutive artworks pictured above serve as prime examples of the artist’s many facets; in Self-Portrait with Peacock Waistcoat, Schiele portrays himself with confidence and pride, while Nude Self-Portrait, Grimacing exudes a raw, practically frightening dimension of Schiele’s personality. From his facial expression to his discomforting stance, this work embodies the pain of mental anguish. 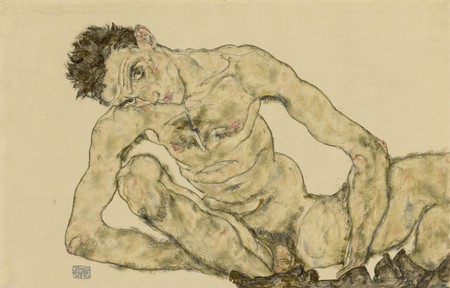 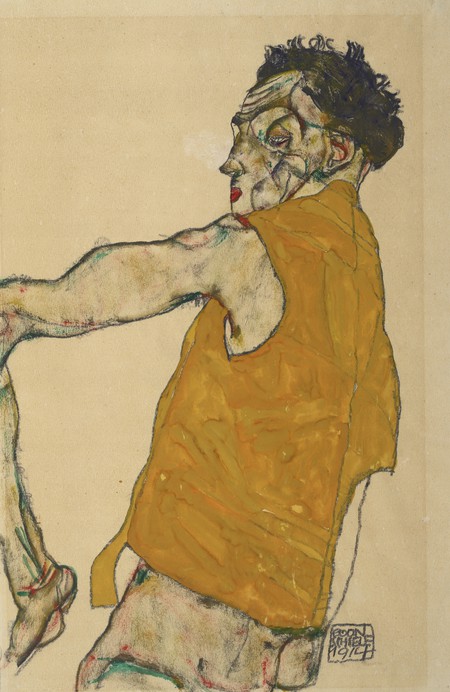 But Schiele’s complexity only defined his aesthetic, which was fully formed by the time he reached 20 years of age. What Egon Schiele makes clear is that the young Austrian artist was a masterful draftsman. He completed his studies at the Academy of Fine Arts in Vienna before adopting an aesthetic influenced by Art Nouveau, and it was during this time that Schiele found a role model in the great Gustav Klimt. But as the exhibition’s press release points out, “unlike Klimt, whose drawings served as ideas, cartoons, or sketches for paintings, Egon Schiele soon came to regard his own works on paper as artworks in their own right.” 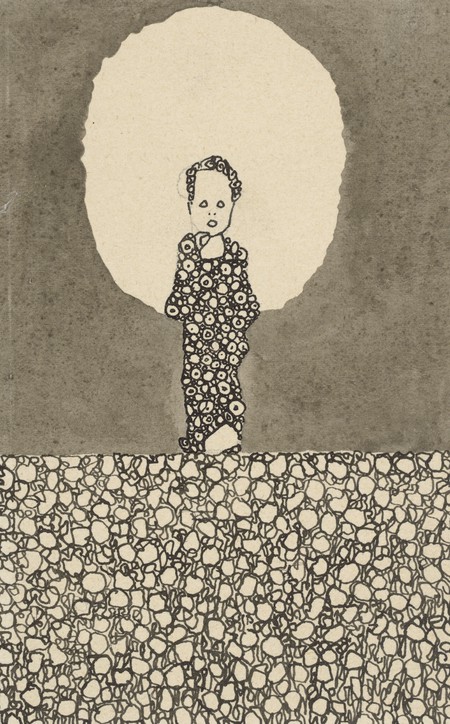 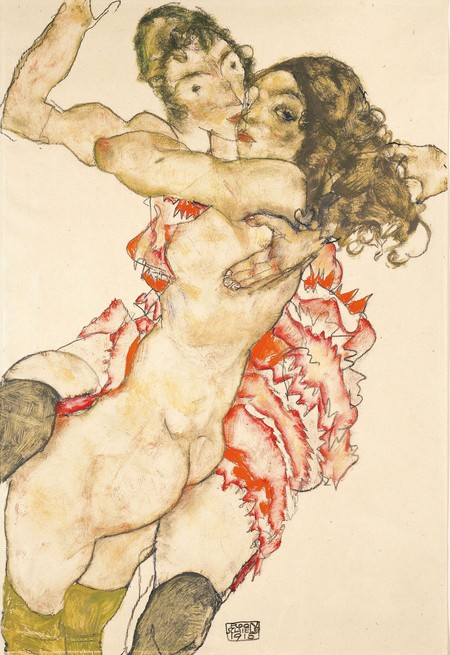 It was with his sketches that Schiele laid the groundwork for his greatest artworks. He most often depicted the body—namely, the nude bodies of his female muses—which would define his aesthetic, but soon get him into trouble; the artist made a risky habit of portraying children. Some subjects are fully clothed, while others, such as the Black-Haired Nude Girl (second work, below) are overtly sexualized. 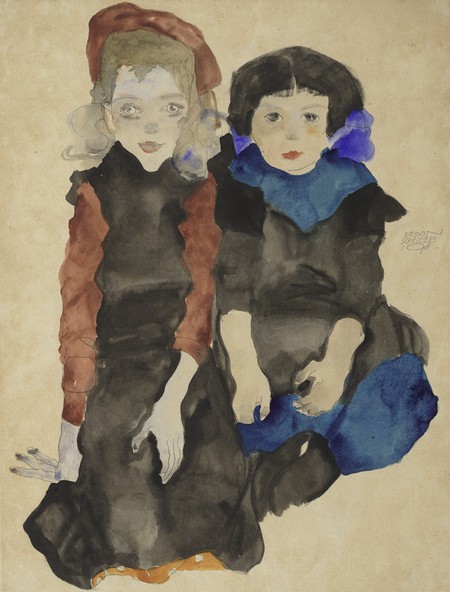 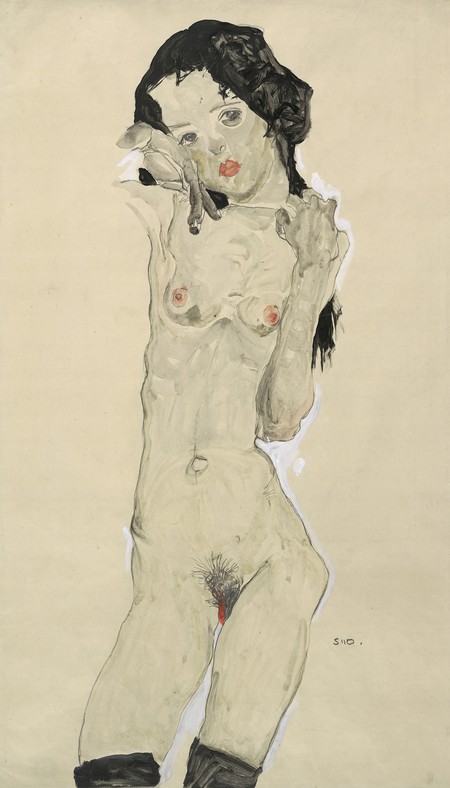 Naturally, his work garnered suspicion from the locals, which culminated in 1912. That April, Schiele and Wally Neuzil, the artist’s muse and known lover, accompanied a 13-year-old girl to Vienna. The girl had run away from home as it was her wish to be reunited with her grandmother in the Austrian capital. But the girl’s father filed a police report on the grounds that Schiele had both kidnapped and assaulted his underage daughter. Shortly after, Schiele was arrested on the alleged charges, which were later proven false. Before the verdict, Schiele was imprisoned for “failing to keep erotic nudes in a sufficiently safe place.” Over 100 of his artworks were subsequently seized. 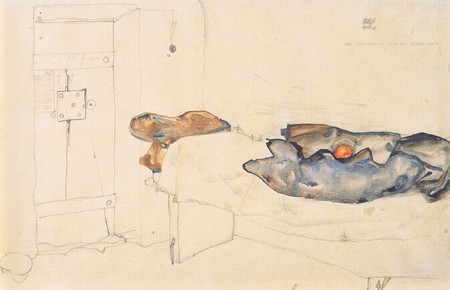 During his time in jail, Schiele produced a number of panic-stricken drawings that are also on view in the Albertina’s exhibition. Aside from the series’ paramount importance in the context of Schiele’s life, the artist’s prison drawings, which portray banal objects and depict claustrophobia and anxiety with palpable emotion, also contrast his portraiture, for which he is far better known. In addition to this series, drawings and watercolors of flowers, ships, and landscapes are also showcased. 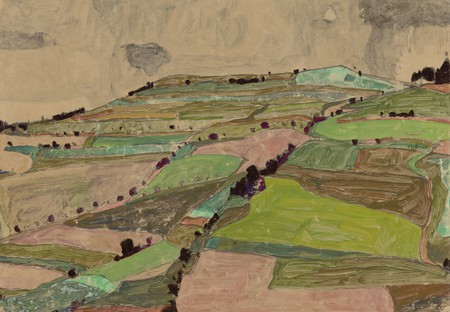 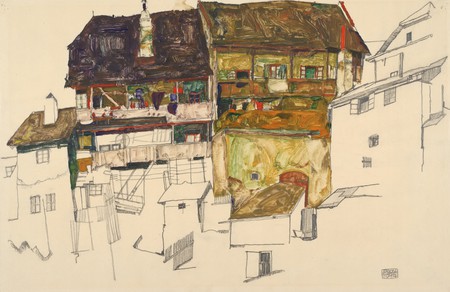 The period following Schiele’s arrest was one of the most pivotal in his career, reflective of a deep influence by Saint Francis of Assisi. During this time, Schiele’s devotion to nature and his fascination with “man’s existential solitude” peaked, evoking the artist’s own experience of isolation. Schiele delved even further into his beloved theme of “the body”, producing a series of works portraying “couples”, though it’s clear by the difference in his subjects’ facial expressions that one half of the couple is human and engaged, whilst the other half is lifeless and disjointed, like a doll. 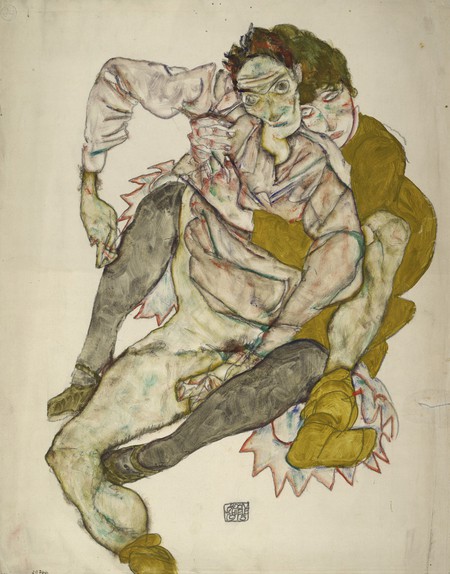 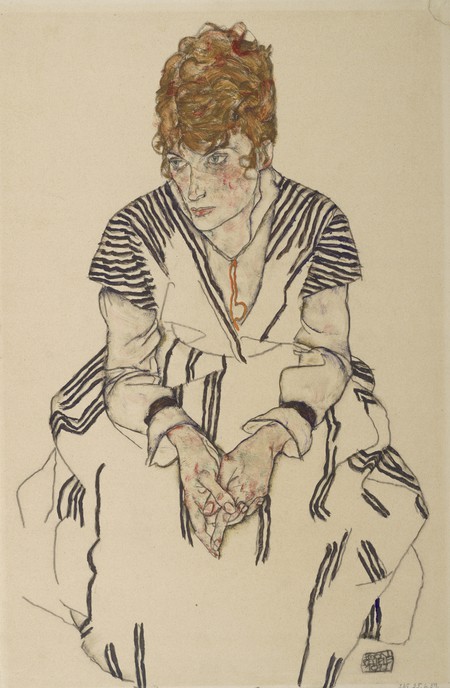 Schiele’s breakthrough as a professional artist happened in spring of 1918, shortly before he died. When Klimt died that same year, Schiele (briefly) became the Austrian modernist movement’s most prized possession. But shortly after the death of his wife Edith, Schiele died from Spanish influenza on the very day the Austrian-Hungarian Empire fell. According to his late wife’s sister, Adele (pictured by Schiele above), the artist’s last words were: “The war is over—and I must go.”