Throughout her long career as a photographer, Ana Casas Broda has developed a style distinctive for its personal themes, realism and playful iconic experimentation. She has utilized her imagination and personal experiences to depict scenes of familial intimacy that illustrate three phases of a love-driven existence, which are filial devotion, self-appreciation and parenthood. 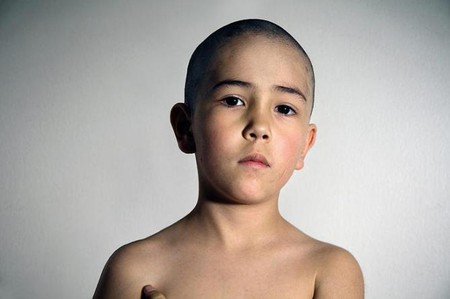 Born to a Spanish Father and an Austrian mother in Spain in 1965 Ana Casas Broda spent most of her life between Spain, Austria and Mexico. Apart from her artistic pursuits in photography she has been active in teaching, organizing exhibitions and workshops and has been involved in the juries of various competitions. Her work is currently divided into three collections.

Album is a work inspired by and dedicated to her Austrian grandmother, whose photographs inspired her career. During the 14-year period it took to complete, the project transformed into a general exploration of her roots by bringing together photographs of her grandmother and herself, capturing fond memories of her childhood and stitching them together with written narratives of her family’s history and personal observations. The effect is an interesting tapestry that illustrates the passing on of a heritage of sensitivities from one generation to another. Album mainly features the past that the photographer tries to approach, by presently recreating her childhood pictures it in order to find what she claims she does not understand: what is the difference between what she remembers and what the photographs show?

Diet Journals was a project never meant for the public. In Broda’s own words, Diet Journals was a study on the relationship between photography and reality and at the same time, a thorough exploration of how differently the camera paints the form from what our vision shows us. In addition, it features handwritten notes of body measurements and diet plans as data and experimental instruments of what influence self control can have. Finally, this work is an interplay of observation and introspection that shaped Ana Casas Broda’s maturity as an artist.

Kinderwunsch features the desire to have children. It is probably the most acclaimed of her published works, having received the award for best-published Art book in 2013 from the Ministerio de Educación, Cultura y Deporte in Spain, and republished in Spanish, English and German. It is certainly the most emotional!

Kinderwunsch is a journey, not a homecoming journey like Album, or a discovery journey like Diet Journals. It is the passage from a painful struggle to rewarded happiness, and at its terminus the creator of life and the creator of art finally meet and converse with each other. In her interview as an exhibiting artist in the ‘Home truths: Photography, Motherhood and Identity’ exhibition in 2013, Broda spoke of how the 5 year fertility treatments she underwent because of her strong desire to have children inspired Kinderwunsch, whose setting turn into the playground of her two sons, and the games they devise as her camera captures the precious moments.