A Tour of Graz's Architectural Landmarks

Clock tower in Graz, Austria | © 955169 / Pixabay
In 2003, Graz was named European Capital of Culture, pushing this modest Austrian city into the limelight in terms of art, design and architecture. From an alien-like structure posing as a modern-art gallery to curiously designed chapels and baroque palaces, here are some of Graz’s best and most eye-catching buildings.

Island in the Mer

Designed by American artist Vito Acconci during celebrations of the city being named European Capital of Culture in 2003, this peculiar landmark, known by locals as the Murinsel (‘Mur island’), is not in fact an island, but a floating platform in the centre of the river. Measuring 50 metres by 20 metres (164 feet by 66 feet), this seashell-shaped structure is connected to land by a footbridge on either side of the river, taking guests to the amphitheatre in the middle and a cafe and playground beneath the domed area. 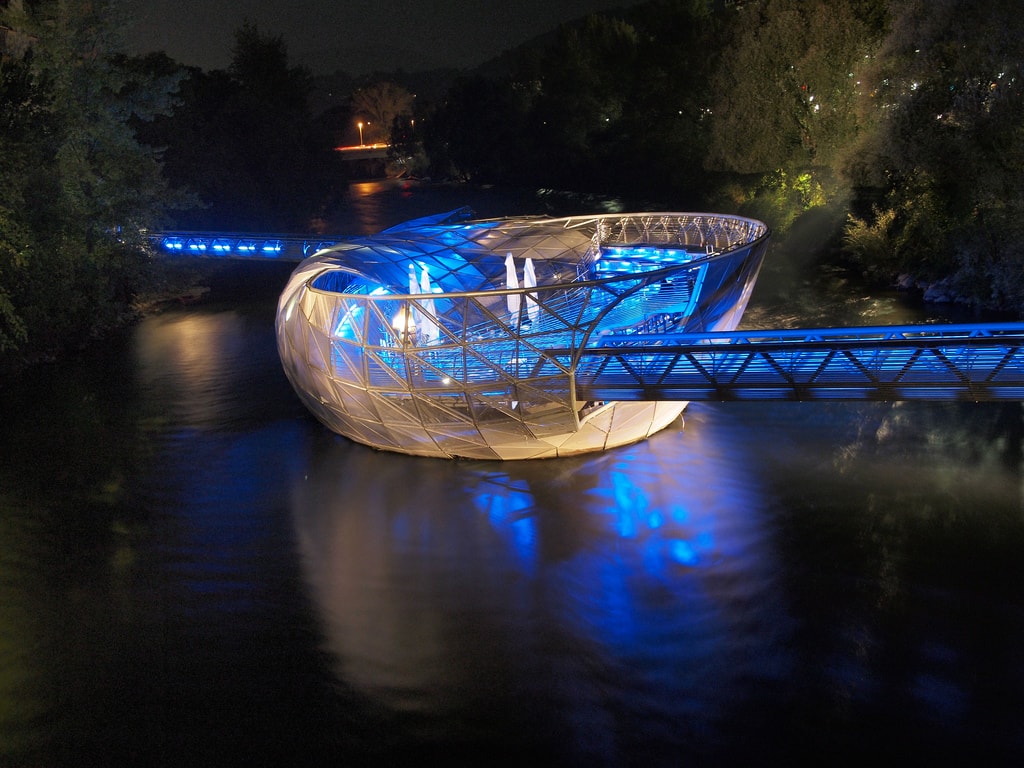 Opera House
The architect behind this unusual landmark, Hartmut Skerbisch, took inspiration from the Statue of Liberty when designing the Light Sword. Considered an important fixture of Graz’s ‘new fusion architecture’, it is a stark example of modernist styles. Built to be included in the 1992 Autumn Festival, the structure is located close to the Opera House.
More Info
Open In Google Maps
Franz-Graf-Allee, Graz, Steiermark, 8010, Austria
Visit website

Building, Museum
Fit for a king | © hjjanisch / Flickr
Exquisite baroque architecture is another of Graz’s assets and Schloss Eggenberg is the cream of the crop. Although much of the building was designed and built in the 17th century, portions of the palace date back to the late Middle Ages. A UNESCO World Heritage Site, this historic gem is one of the city’s most popular tourist attractions, boasting impressive grounds, magnificently designed staterooms and a wealth of history to uncover. Guided tours are available.
More Info
Open In Google Maps
90 Eggenberger Allee, Graz, Steiermark, 8020, Austria
+4331680179532
Visit website

Built during the 1500s, this is one of Graz’s only renaissance structures and an important piece of architecture from the era. Designed and built by numerous architects, the house contains swooping, ornate arches and a three-storey arcade courtyard. Today, it is mainly used as a function venue for celebratory events. 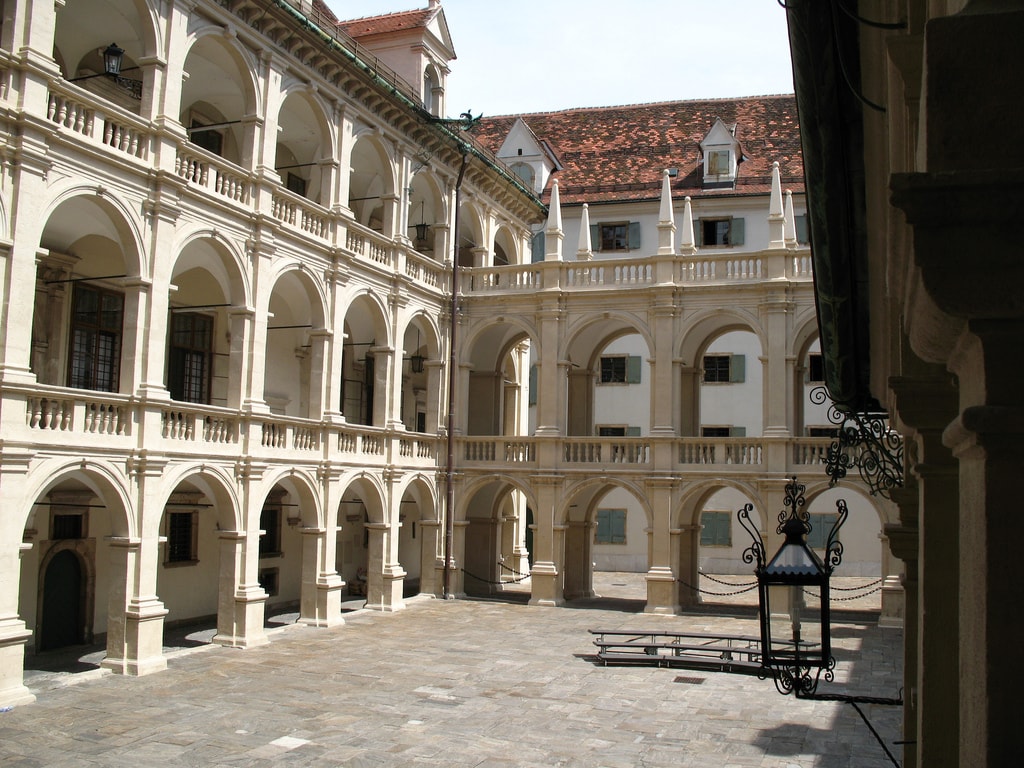 Building
The zig-zagging facade of this apartment block is an unusual sight to behold. Designed by Love Architecture and Urbanism, the striking building is comprised of 15 apartments and one penthouse, all containing balconies and with unique interiors.
More Info
Open In Google Maps
36 Ragnitzstraße, Graz, Steiermark, 8047, Austria

The beautifully smooth, sweeping curved facade of this stand-out architectural gem is easy on the eyes. Unlike the average place of worship in almost every way, this innovative structure, used primarily as a funeral chapel, was designed by Austrian architects Hofrichter-Ritter.

This striking, bulbous construction, sticking out like a sore thumb on the banks of the River Mur, wouldn’t look out of place in a sci-fi movie: it has even been nicknamed by locals as ‘the friendly alien’. One of Graz’s best modern-art galleries, the Kunsthaus is not just an exceedingly curious piece of architecture but also an innovative exhibition space, housing works from 1960 onwards. Built as part of the European Capital of Culture celebrations in 2003, the structure has received mixed reactions from the public. 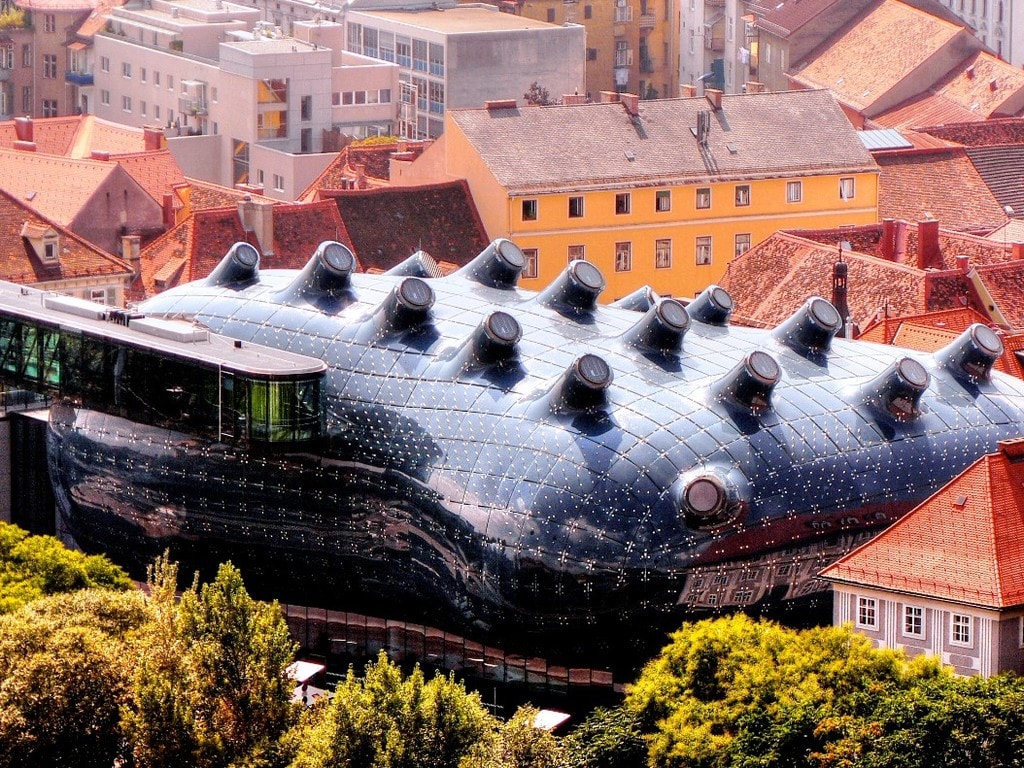