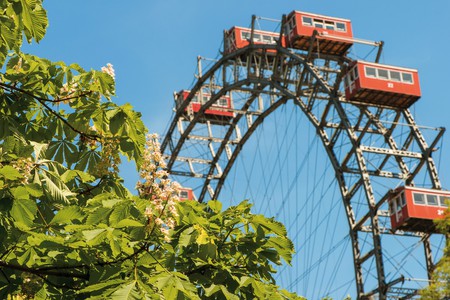 Amid the chaotic, garish bright lights of the Prater amusement park, the Ferris wheel, known to locals as the Wiener Riesenrad stands proudly – an iconic construction that has become one of Vienna’s most recognised attractions.

The space in which the Vienna amusement park occupies was once used an imperial hunting ground. In 1766, the Emperor Josef II gifted the Prater to the citizens of Vienna to be used as a public park and entertainment center. Many years later, when the park was well established, the wheel was given as a present to Emperor Franz Joseph in celebration of his golden jubilee. It was designed by British engineer, Walter Bassett, whose creations include the Grande Roue de Paris.

The Ferris wheel is eye-catching from afar – curving over the city skyline with its faded pillar box red wooden boxes. The ride is the most popular of all the attractions in the amusement park, elevating guests more than 200ft in the air, providing beautiful panoramic views over Vienna across the Prater and the River Danube. 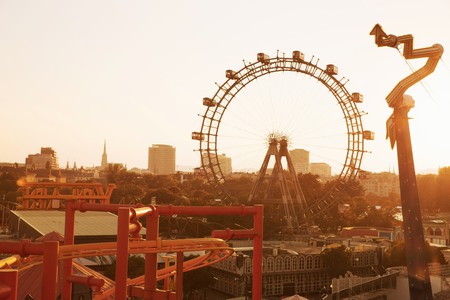 The Prater Wheel has had its fair share of ups and down throughout its life so far. In 1989, in an attempt to make a drastic political statement, Viennese woman Marie Kindl hung on to the structure by her teeth outside one of the cabins. In 1944, during WWII, the wheel was destroyed by fire and was rebuilt and reinvented a year later, however with 15 cabins (known as gondolas) rather than the original 30.

On a brighter note, the Riesenrad has had several flings with Hollywood; appearing in the Viennese drama The Third Man and Richard Lineker’s movie Before Sunrise, where it played a role in a romantic scene. 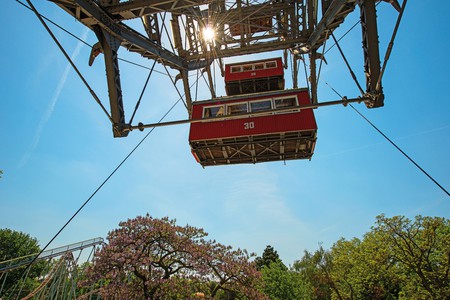 You can experience the wheel in a variety of ways; the simple way or, alternatively, you can enjoy an extravagant spin with candlelit dinners, cocktails and coffee break rides all available. Inside the park, there is a variety of options for refuelling, including the Bitzinger Wurstlstand where you can eat authentic Viennese cuisine as you admire the famous landmark. 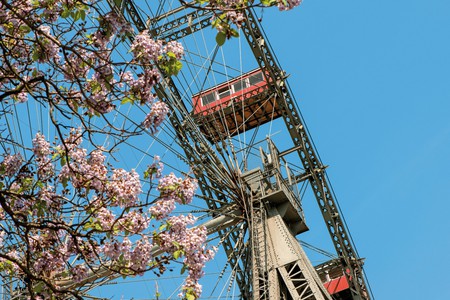