Robert Musil’s The Man Without Qualities had a tortuous publishing history but, as John Millar discovers, since its full publication it has become widely considered the third member of a triumvirate.

Grafitti from Jef Aerosol at the Robert Musil Museum in Klagenfurt

Along with Proust’s A la Recherche du Temps Perdu and Joyce’s Ulysses, Robert Musil’s The Man Without Qualities represents the pinnacle of the modernist novel in Europe. In terms of content if not technique, Musil’s work speaks most directly to a contemporary readership. Set in Vienna in the year before the First World War, it depicts a social and political elite desperately attempting to maintain the status quo in the face of radical socio-political forces that they cannot comprehend and that will in the following years tear European civilization limb from limb. Bubbling beneath the surface are the libidinal depths unleashed by psychoanalysis and nihilistic musings as described by Nietzsche. Indeed, this is the kind of ambitious novel of ideas where the central character Ulrich gives his friend’s wife Clarisse a copy of Nietzsche’s complete works as a wedding gift.
Despite the lazy comparisons to Ulysses and A la Recherche (based perhaps more on size than content), the novel to which Musil’s work bares most resemblance is Thomas Mann’s The Magic Mountain. Both novels deal with a European elite asleep to the monstrous forces contorting beneath them, and both explore the loss of narrative certainty in the face of new intellectual and scientific developments. Where Musil’s novel differs though is in its portrayal of Ulrich, a unique anti-hero, and the unique quality of the writing. Every page of this mammoth thousand-page work contains an original thought or perspective, and there are passages that set the senses on edge in their clarity of foresight. We realize we are still living in Musil’s world. Take for example:

‘There is just something missing in everything, though you can’t put your finger on it, as if there has been a change in the blood or in the air; a mysterious disease has eaten away the previous period’s seeds of genius, but everything sparkles with novelty, and finally one has no way of knowing whether the world has really grown worse, or oneself merely older.’
Or:
‘’This beauty’ one thought, ‘is all well and good, but is it mine? And is the truth I am learning my truth? The goals, the voices, the reality, all this seductiveness that lures and leads us on, that we pursue and plunge into – is this reality itself or is it no more than a breath of the real, resting intangibly on the surface of the reality the world offers us? What sharpens our suspicions are all those prefabricated compartments and forms of life, semblances of reality, the molds set by earlier generations, the readymade language not only of the tongue but also of sensations and feelings.’ 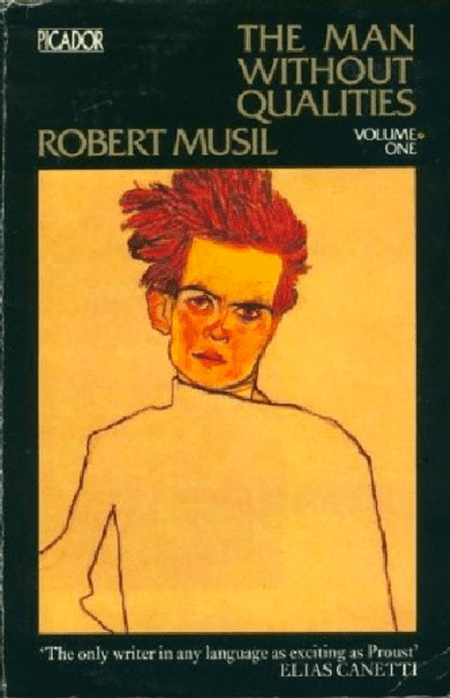 Both of the above quotes are musings from Ulrich, and we can see the ways in which he represents a particularly modern sensibility, one that we may recognise in ourselves. He is wracked with doubt, he desires to act, but like Melville’s Bartleby he cannot bring himself to do so. Unlike many of the other characters in the book he recognises the weight of history. As a scientist and mathematician he is able to think both philosophically and scientifically though intellectual striving brings him no peace. He is intellectually vigorous, handsome, and physically athletic and yet he is paralysed by nihilism, impotent in the face of the forces of history, desperate for spiritual succor and yet unable to accept it. The second quote above comes to him as he stands in front of a church that he pictures in his mind as some benign, blemished old woman. Indeed, despite Milan Kundera’s claims to the contrary (in his book The Curtain he maintains that The Man Without Qualities, though set in Vienna, does not mention the city more than twice and is not concerned with setting) this is a book in which both the physical and spectral presence of Vienna is paramount. Architecture is used time and again to invoke the struggle of the new world to be born. Ulrich’s dwelling, for example, is clearly symbolic of its owner. It is a former summerhouse in the imperial rococo manner the interior of which Ulrich has made over in the modern style and fills with books of contemporary philosophy.
Vast and unfinished at the time of Musil’s death, the novel leaves Ulrich retiring from life, drawn into a project to celebrate the Austro-Hungarian Empire. Later the story concerns his sister, Agathe and their strange, almost incestuous relationship.
In our time, in which political impasse and disaffection have become commonplace, we might do well to turn to Musil’s great work of ideas and uncertainty to understand our own age of doubt and flux.