Where to Find the Oldest Restaurants in the World 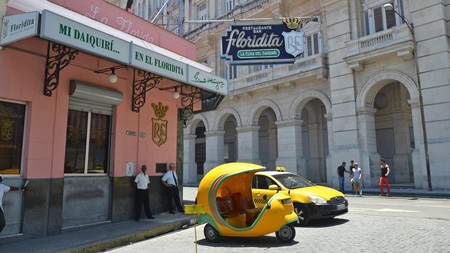 The Floridita, in Havana, is famed for its daiquiris – and Hemingway | © Fiona Deaton / Alamy Stock Photo

Dining out is as much a part of the modern travel experience as delayed flights and lost luggage. Here, Culture Trip takes a look at the oldest restaurants in the world, and pick out some of the dishes that have stood the test of time.

You can learn a lot about the history of a place from the food served there, and according to this round-up from NetCredit, the best restaurants in the world might also be the ones with the oldest menus. Breaking down the list by continent, let’s take a look at highlights from each before revealing the oldest establishments and their signature dishes. 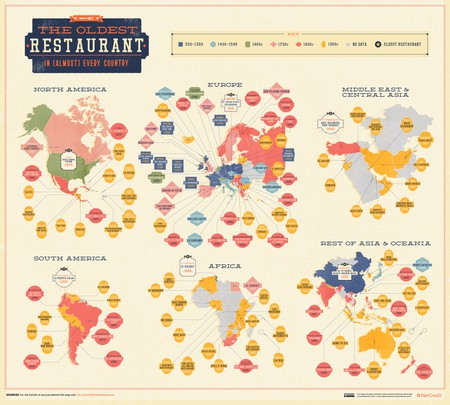 The oldest restaurants in the world, highlighted in map form | | © Netcredit 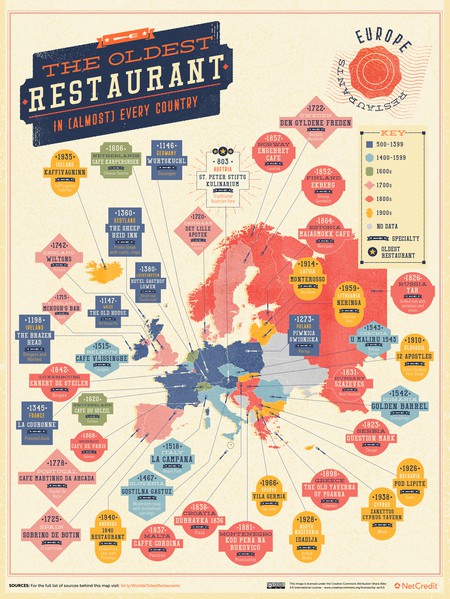 A guide to the oldest restaurants in Europe | | © Netcredit

Spain’s Sobrino de Botin is widely regarded as the world’s oldest continuously owned and operated restaurant. It first began serving meals in 1725, which is a fairly long time ago by any standard, but there are a number of establishments that can trace their roots back even further.

St Peter Stifts Kulinarium in Salzburg was first mentioned in a poem by Alcuin of York in 803CE, making it not only the oldest restaurant on the continent, but also the oldest in the world. The speciality of the elaborately named Austrian restaurant is a dish known as tafelspitz (boiled beef with minced apple and horseradish).

The UK can boast two of the oldest restaurants in the list with the Old House, in Llangynwyd, Wales, founded in the 1100s, and the Brazen Head, in Dublin, which dates back to 1198. These eateries still serve traditional dishes such as pie and chips and bangers and mash. 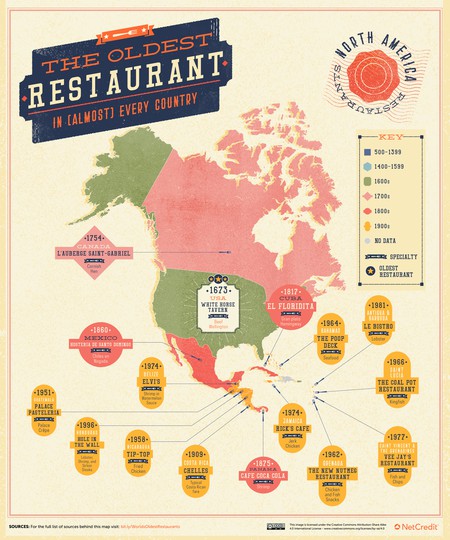 As origin stories go, America’s oldest restaurant has a doozy. Local pirate William Mayes opened the White Horse Tavern as a meeting place for Newport’s general assembly. His son followed him into the piracy and restaurant trade and the business remained in the family for more than 200 years. Presumably they gave up marine-based criminality somewhere along the way.

North of the border, in Canada, Montreal’s Auberge Saint-Gabriel was the first tavern on the continent to gain a liquor licence. Since 1754 the restaurant has served Cornish hen with vin jaune (a type of white wine) and wood-fired grilled vegetables, which is still popular today.

Elsewhere on the continent is the fascinating Poop Deck in the Bahamas, Panama’s Cafe Coca Cola and Cuba’s El Floridita, which was a favourite hangout of Ernest Hemingway. 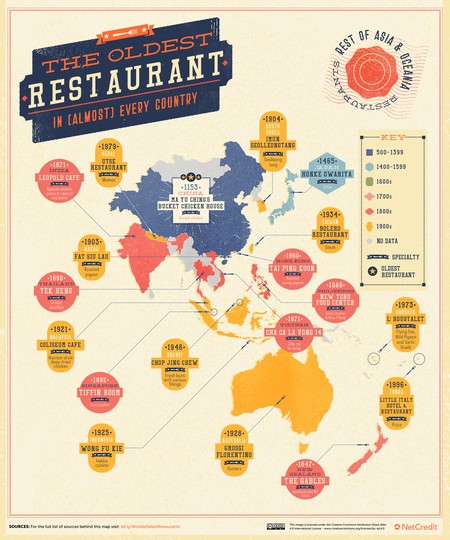 The oldest restaurants across Australasia | | © Netcredit

Ma Yu Chang is China’s oldest business, serving bucket chicken since 1153. The restaurant was closed for a long time, but the secret sauce that made it popular in the first place remained a closely guarded family recipe that returned with the restaurant when it reopened in 1864.

As evident in the list of oldest hotels in the world, Japan has a proud history when it comes to being early adopters of businesses dealing with the needs of customers. Honke Owariya was originally a confectioners in Kyoto, but later began serving soba noodles when local monks struggled to keep up with demand in a nearby temple. The restaurant’s offer to help turned the business into a popular food stop, gaining it “purveyor of soba noodles to the imperial palace” designation. 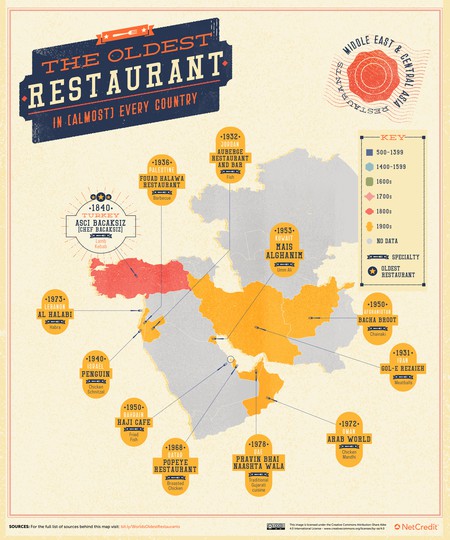 Many of the oldest restaurants in this continent aren’t actually that old at all. Dining out isn’t really part of Middle Eastern culture, but things are changing. Saudi Arabia might not be on the list, but can boast popular fast-food shop Al Baik, which serves what is said to be the best fried chicken in the world.

Turkey’s Aşçı Bacaksız has remained in the same family since it opened in 1840 in the town of Afyonkarahisar. Guests can still expect a greeting from a family member before enjoying lamb kebabs. 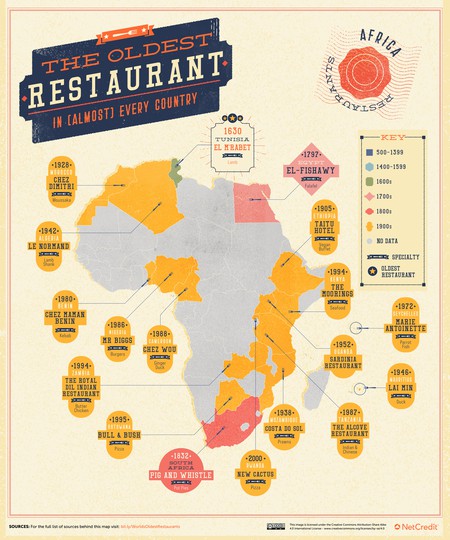 Tunisia’s El MRabet overlooks Jemâa ez Zitouna marketplace and has been serving tasty lamb dishes since 1630, making it the oldest restaurant on the continent. The rest of Africa, similar to the Middle East, has historically seen a preference for home-cooked foods over restaurant cuisine, but there are a few notable exceptions – Mauritius has Lai Min, a Chinese restaurant that specialises in duck, and South Africa’s Pig and Whistle has been serving pot pies and pub grub since 1832. 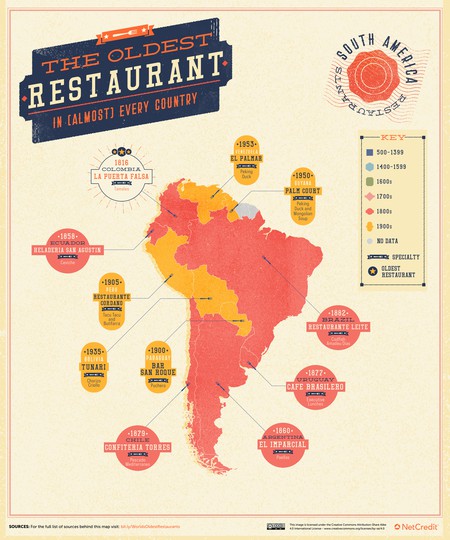 South America is noted as having some of the best ingredients in the world. Restaurants tend to be small, local hangouts and Bogota’s La Puerta Falsa is no exception. The diner only seats 20 people at a time, and is better known as a “hole in the wall” street-food vendor that serves tamales famed across Colombia.

Argentina’s El Imparcial was named in the hope that patrons wouldn’t spoil the atmosphere by bringing political discussions into the restaurants. Instead, guests can leave with a belly full of paella served in the traditional way.